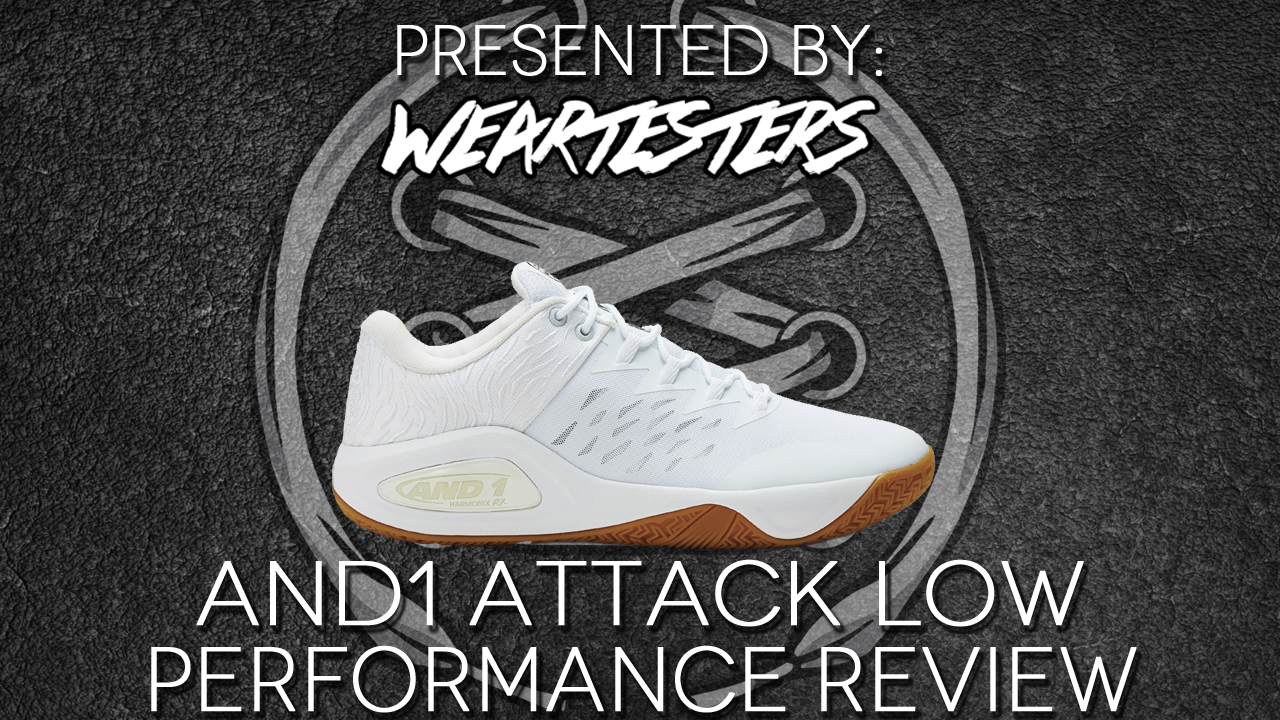 And1 is back, at least from a performance perspective. So how does the And1 Attack Low stack up? Follow the bouncing…

If you played basketball and grew up in the ’90s you wore And1 something. The Game Shorts may be the best shorts ever. The Trash Talk tees were classics. The shoes, at one time, were worn by numerous players in the NBA — most notably Vince Carter, Kevin Garnett, Latrell Sprewell, and Chauncey Billups. Simply put, the shoes played, and they spoke to the youth like no company at the time.

Flash forward nearly 20 years to now. The company signed a deal with Wal-Mart, and things went downhill from a basketball-consumer perspective. However, the company has recently focused on making a true performer, one that is worthy of NBA floors again, and with that we get the And1 Attack Low. Let’s go…

First of all, and this has to be addressed now, that gum bottom is a beauty. The color is only found with the white upper, but imagine that same gum was on the red and black colorways on the And1 site — wheeww! Okay, enough on the looks — the pattern works and works well.

A wavy tread covers the forefoot under the balls of the feet while a chevron herringbone covers you under the toes. Both hold on to the floor and push dust way off the shoe. Not one time did I have to wipe — not just per wear, I’m talking at all, from session to session, day to day. Stopping was solid and immediate with no sliding or hesitation.

As for outdoors, you’re good, even in the gum colorway. Normally gum is softer than solid, but the And1 Attack Low feels like it will hold up great. The pattern is thick so that wear isn’t an issue, and the rubber below it is thick. And1 was always good for playground/outdoors, and the Attack Low follows right back up.

I was jumping up and down when I read the And1 Attack Low had Harmonix. For those not familiar, Harmonix was a system of air bags And1 used on the KG and Sprewell lines that allowed for compression and spring-back. It was coupled with a concave heel shape underfoot to further enhance the feeling, and it felt great while playing.

This isn’t that. Don’t get it wrong, this new Harmonix RX feels good while playing too. The feeling I was first reminded of was Asics Gel, both to the touch and underfoot. Harmonix RX rides low and feels fast, responding quickly to any step or movement. The impact protection is there as well, although the foam carrier is a little stiff and didn’t break in much. There isn’t a real “energy return” feel — once you land it’s pretty much over — but again, the stiff midsole and soft Harmonix get you into the next step smoothly and quickly.

2008 called — it wants it’s fuse back. While fuse does work in the long run, the initial break-in time — the popping, hard spots, and stiffness — is something a player will have to fight through to get to the good. And what is the good?

Well, for one, durability; the fused and mesh upper will be able to handle those rough outdoor summer courts. Containment is another strong point, as fuse does not stretch at all (so you better get the correct size). While you are working through that, and as the shoe “learns” your foot, expect some stiffness and a fit that is a little generous (more on that shortly).

The tongue and inner padding in the And1 Attack Low is really, really nice. The detailed logos on the tongue add some touches to let you know this shoe is serious about ball. The padding on the tongue is nice and thick and removes any lace pressure. The heel, though, that’s a different animal — literally.

The exterior area around the heel counter is embroidered to create a tiger’s face. Not Tony — a legit National Geographic-looking tiger. It’s in the same color as the upper so it is extremely subtle, but it is there. This adds nothing, but looks cool as Santa’s workshop.

For the interior of the heel, And1 took the tiger logo and made it into silicon, then placed the silicon inside the heel area to grip the sock and eliminate heel slippage. At first, I thought someone wore the shoes before me and got some lint balls stuck in there. Then Nightwing and Stanley looked at their pairs and we managed enough brain power to figure it out.

As discussed in materials, when a fuse upper is used, fit sometimes takes a while to dial in. The And1 Attack Low is no different. When first put on-foot, the forefoot is noticeably narrower than the heel. For the first few wears, this meant some rubbing on the pinky toe, at least until the area broke in and softened up a little bit.

It is a snug fit, but unless you are a widefooter, specifically in the forefoot, I wouldn’t go up any. The length was right on, with my normal 10.5 fitting about a thumbs-width from the end of my big toe to the end of the shoe. One area fused shoes had problems with, at least on my foot, was toe bubble (extra volume right over the toes). Thankfully, the brand dropped the box height so the And1 Attack Low fits right on top of the foot with no extra volume.

The midfoot fit is completely locked in due to one thing: the simple lacing system. No real tricks, unless you count the lace straps running to the midsole, but the spacing and number of lace holes allows the shoe to pull up and form perfectly around the foot.

As for the heel, that generous width did cause some issues, specifically heel slip if I wasn’t laced tight. The thought was the silicon tiger pattern would grab and hold, but the fit is so wide that unless you lace up super-tight (which I do) you will still feel some heel slip. Personally, after the first two or three days of wearing, I felt secure and locked in, but if you have a narrow foot, at least in the heel, you may still have issues. The Attack Mid would probably work better with its higher cut and lockdown around the ankle.

Low-riding midsole? Check. Wide outsole for a stable base? Check. Fused materials on lateral side for containment? Check. Lacing system that works? Check. About the only thing not here that helps with support and stability is a solid heel counter, but with the way the midsole rises up on the foot in the back of the shoe a counter would be overkill.

For a low (feels funny even phrasing it that way with the way lowtops are made now), the support is on par with the best in the game. There is even a TPU midfoot shank for torsional support. The And1 Attack Low has all the makings of a supportive shoe without feeling like a boot. And1 used to make “running shoes for the court” and the Attack Low gets back to those roots.

The And1 Attack Low was one of the most fun shoes I have reviewed this year. As someone who was around when the company started and saw what it would become, both good and bad, the And1 Attack Low is a serious jump back to the performance world. And1, at one time, had nearly 20% of the NBA on it’s roster. That’s a lot of players, and the brand made a lot of killer shoes.

As for the And1 Attack Low, if you are anything from a quick guard to a banging post, you should be good from every aspect of this shoe. The low ride, solid, stable base, and stability all work for any part of any game. Maybe, just maybe, look at the Mid if the ankle height makes you feel better, but otherwise the Low has you covered.

For the summer, the And1 Attack Low is a great outdoor option as well, and the white/gum goes from courts to streets as smooth as the And1 Player’s bald head. Keep this coming and we may even get more mixtapes (but I doubt it). 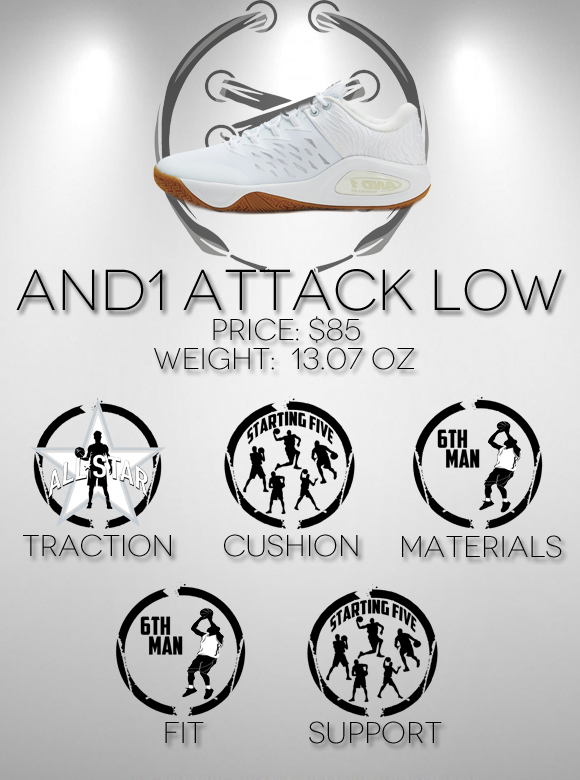