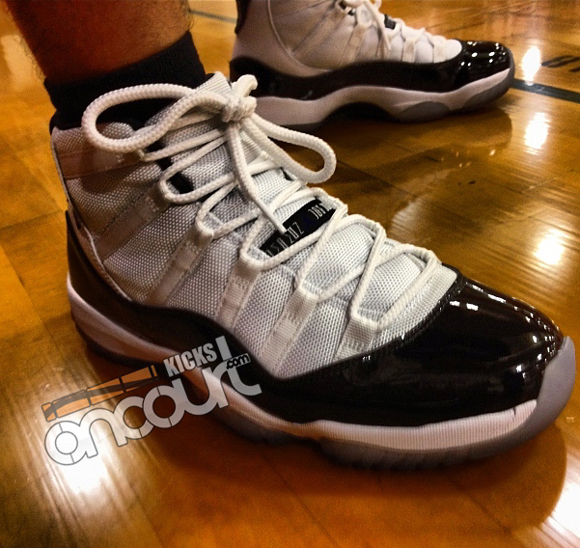 Traction – The overall traction was very solid with all things considered. Usually when you have a translucent outsole you lose traction when dust or debris is on the court but thankfully the Air Jordan XI have solid rubber traction pods located in the heel and forefoot.

The clear sections are nice and sticky straight out the box, which is good and bad depending on court conditions. However, I played on well-maintained courts in addition to debris ridden floors and the Air Jordan XI held up perfectly fine. Worst that happened was that I needed to wipe the outsole semi-often on dusty courts.

Cushion – With the lightweight Phylon and full length Air unit in place, cushion is solid as well. While they aren’t as soft as the original or 2000/01 Retro releases, they are still leaps and bounds better than previous Air Jordan models. Impact absorption is available and consistent throughout while still maintaining decent court feel in the forefoot.

* Disclaimer * cushion is as stated in the Silver Anniversary, Cool Grey, Concord & most likely the upcoming Black/ Red colorway which are all post 2010. Air Jordan XI’s from the 2008 CDP & 2009 Space Jams are not the same.

Material – Patent leather and ballistic nylon mesh are used along the upper… oh, and a very small piece of cheap split grain leather is located at the heel. Overall, the materials are nice. The patent leather isn’t quite as strong as it could have been if it were a bit thicker but all in all, the materials performed pretty much on par with the original and previous Retro versions.
If they made an Air Jordan 11.5 with Fuse replacing the eyelets and mid panels, open mesh in place of the ballistic nylon mesh and a Jordan Melo M8 patent leather cut with heel and forefoot embedded Zoom Air… I’m drooling just thinking about it.

Fit – They fit true to size, wide footers may want to get ½ size larger or wait for the materials to break-in a bit… which they will. The mesh wraps around your foot perfectly and the patent ads some support which is greatly needed. Lockdown is great all the way up the shoe so there isn’t much to complain about. Only thing that could pose a problem is that the materials are ‘weak’ in comparison to today’s synthetics but this is where growing up in the 90’s comes into play… we’re used to this type of shoe so it doesn’t bother us at all.

Ventilation – It isn’t great but it isn’t horrible. The material is breathable so that’s going to scores some points but its noticeably not as ventilated as something like the Air Jordan VI, which I still feel has the best ventilation out of the entire lineup.

Support – If the materials didn’t move with your foot so much I would say the support is great. The Carbon Fiber adds a lot of support along the entire base of the foot, not just the arch, and the overall fit provides you with the extra reassurance you’d want or need… materials just get a bit flimsy… its mesh… not much you can do.

Overall – The Air Jordan XI is a straight beast on-court. They look good, feel good and they play well on top of that. I hoped the quality wouldn’t obstruct my opinion on their performance and it honestly hasn’t. These are still one of my personal favorite on-court options of all time. There are better options, of course, but just knowing that you won’t lose and ankle or mess up your knees is definitely something to consider. It’s really their increased price that will cause someone to not wear these on-courts… I had someone come up to me one night after playing and they said “I’ve never seen anyone rock Concord’s to hoop… you must have two pairs.” I do… but even if I only had one… they’re worth playing in.