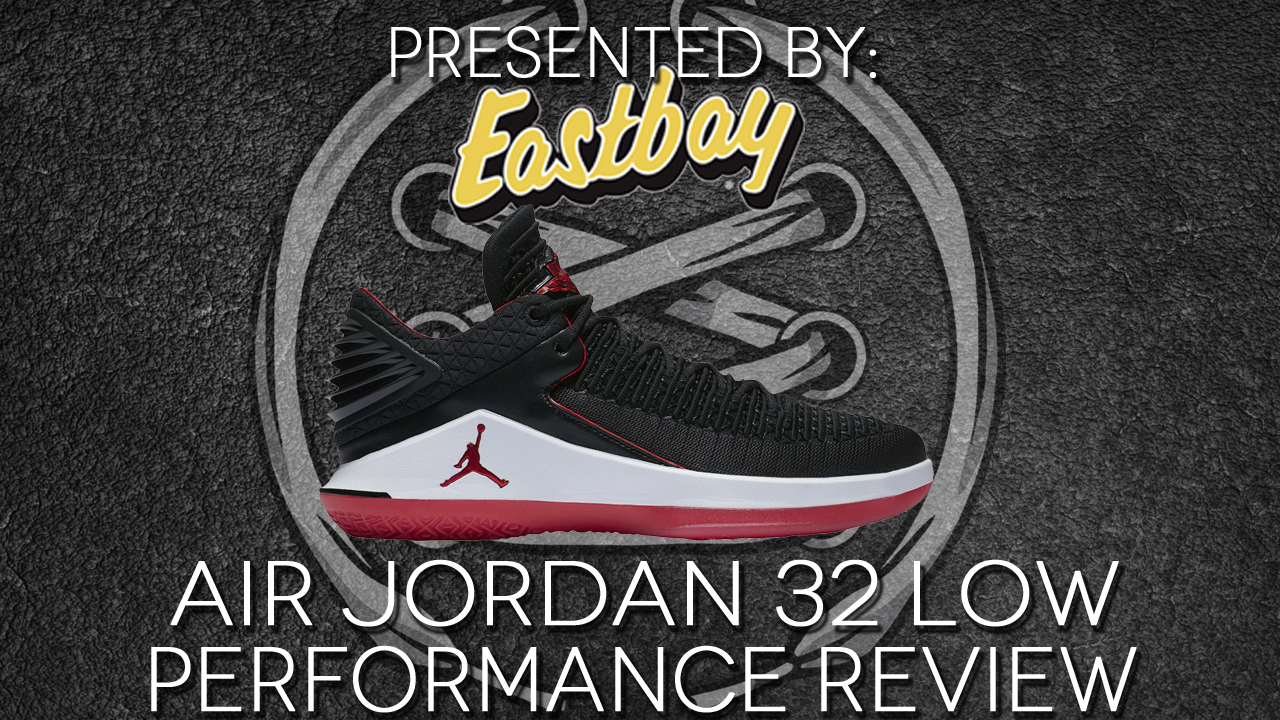 The Air Jordan 32 Mid and Low have been wear-tested for our latest performance review.

You can find the Air Jordan 32 now at Eastbay.com

Traction – The Air Jordan 30 and 31 disappointed many that played in them from a traction standpoint — especially compared to the 29 and 28 that came before them — but the 32 switched things up and used rubber that actually gripped the court. Not only did they grip the court, but it gripped really well.

Jordan Brand used an altered herringbone, which it also tried with the 31, and this time around it was a success. Dust only affected performance in a minor way; infrequent wiping was needed on a less than desirable court. If you play on a clean court, or at least one that is properly refinished once a year, you’re going to get a tacky experience that bites when you need it most.

After playing in both the mid and low version of the Air Jordan 32, the Lows seem to uses better rubber overall. I wouldn’t say it’s astonishingly better but I noticed it. If you have been unsatisfied with traction from the flagship Air Jordan model in the past year or so then I think you’ll be very happy with this year’s version.

I wasn’t able to take them for a spin outdoors so I can’t report on the outdoor performance this time around.

Cushion – Full-length Unlocked Zoom Air seems to be a thing of the past because heel and forefoot segmented Zoom Air returns — for the first time since the Air Jordan XX8 — on the Air Jordan 32. The forefoot section of Zoom Air is of the unlocked variety whereas the heel is bottom-loaded.

This year, the unlocked Zoom Air does not protrude out of the shoe so the extreme bounce isn’t here. However, stability is — the lack of it was my main issue when playing in the 31. You can feel the Zoom when you place enough pressure on the forefoot; it feels nice and it gives you the feeling that it springs into action as you need it rather than it lingering around while you may not be in need of the cushion. For me, this setup feels more balanced than unlocked setups in the past. While some get used to the feeling of a large volume Zoom Air unit protruding from the sole, this feels a bit more…normal.

The midsole setup is pretty stiff to start. It does break-in with time so be patient and you’ll stop thinking about how stiff things start out. The Air Jordan 32 reminds me of the Air Jordan 12 in that aspect — maybe not quite as stiff as the 12s, but pretty damn close. I think the overall stiffness is due to the Pebax moderator plate. Once you get that plate to become flexible you’ll really start to enjoy the ride as you’ll receive cushion and stability.

Materials – I absolutely love the materials on the Air Jordan 32. It definitely isn’t the most breathable because of the layers, but this type of Flyknit is what I’ve been waiting for since Nike first introduced it into the basketball line. There is no heavy glue usage, no TPU strands or yarn. Just really thick Flyknit that moves well with the foot.

Certain areas are very tightly knitted while others offer some stretch. The areas that do stretch are still extremely thick so you’re getting the most out of the material. It’s been durable so far, although the eyelet areas potentially ripping is a concern of mine. Hopefully, that doesn’t happen to anyone, but there’s always Nike’s warranty if it does.

The heel area features synthetic leather or suede (depending on the colorway). I glossed over this area in the Air Jordan 32 video review because I don’t feel it’s anything of great significance and it’s very similar to last year’s Air Jordan 31 setup. It works well and adds strength to the rear section of the shoe ensuring lockdown, but premium it is not.

I suppose it doesn’t have to be premium, but that would have been awesome. This is more of a small gripe with the mid because the lowtops feature such a small amount of leather on the heel that it really doesn’t matter. The Mid on the other hand — it uses a lot of material at the rear overlay and it would have been awesome to have seen something similar to what was used on the red suede Air Jordan 21. Remember those? Italian red suede that pointed back to Jordan Brand’s past of manufacturing the AJ2 upper in Italy. Yeah, that would have been really awesome.

The Hall of Fame badge though, that goes to the Flyknit. It’s the real MVP.

Fit – When I initially put on the Air Jordan 32 width felt pretty narrow — and because of that, the shoe felt slightly long. However, after breaking them in I feel going true to size is the best option. I have a friend that bought a pair and he has a wider foot. He went true to size as well and was happy with them. Trying shoes on in-store is always the best option though (if or when it’s possible).

Lockdown was really nice. I wasn’t sure what to expect because this was the first time I’ve played in proper Flyknit. Will it stretch too much? Maybe not enough? First few runs and the Air Jordan 32 was definitely tight but the Flyknit did stretch a bit — not to the point to where I felt insecure, but enough to where I needed to readjust the laces. Once I did that there was nothing else to worry about. The shoe just felt like it was made for my foot, something I really enjoy.

Last time I felt this way about an Air Jordan upper was with the 29 Low. Those were so awesome. The Air Jordan 32 gave me similar vibes but with a more structured heel — which is something I loved about the 31. I guess you can say Jordan Brand blended what’s been working throughout the last three years and we’re finally seeing the refined version of it all. Subtle evolution down the line, just like the glory days of the early Air Jordan line.

Support – If you’re able to find the size that fits you best then support shouldn’t be an issue. I rolled my damn ankle (same one) in both the Air Jordan 32 Mid and the Low and was able to continue playing every time. I really need to stop going after rebounds when someone with a size 14 is down in the post — especially when the most I am able to do is temporarily disrupt their eventual rebound.

Everything worked well though. The moderator plate works to increase torsional rigidity and the outrigger was solid. The midsole sculpt in the rear may be off-putting for some from a design perspective because it isn’t a clean line but it contains the rearfoot well upon lateral movements. There is an internal heel counter, as well as the visible external piece — both do their job well.

I feel that fit and lockdown are better in the Air Jordan 32, as is the cushion/stability, but I loved the decoupled heel and forefoot. However, the 32 is stiff at first and a bit heavy. As usual, it all depends on what you want or need out of your basketball shoe. Not every shoe is made for every person, but there’s something out there for everyone. You just have to know what you’re looking for.

The Air Jordan 32 is a huge step in the right direction. Everything feels refined. If Jordan Brand can keep the stability but increase the flexibility then it will have perfected the Flight Speed setup. I think people are going to like this one. 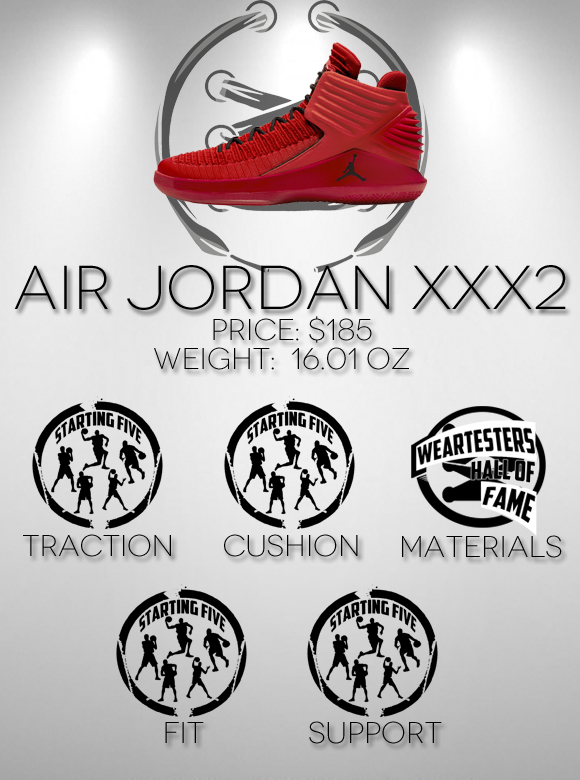 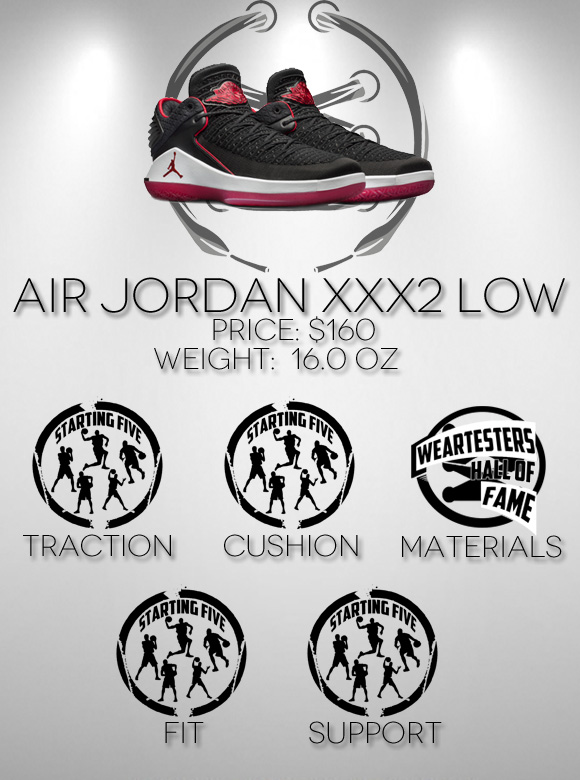