It’s 2019 and adidas has made some changes to the Ultra Boost. This is our performance review.

As a runner I have been in love with the Ultra Boost since the original model. Over the years there have been some tweaks but with this newest model they made it out that there would be some major upgrades would be happening. I couldn’t even begin to wrap my head around what there was left to improve. Why mess with perfection?

They completely overhauled the upper. I didn’t even know they could make these things more sock-like than they were, but they did. The Primeknit 360 stretches in all the right places without over stretching. There are no seams to worry about — no rubbing or chaffing. It’s definitely a more rugged feeling material than some of the previous versions, and it looks it, all the way up to it’s unfinished looking collar. The cage that wraps your midfoot and holds your laces is interesting. The harder TPU they had before never really bothered me, but this one is much lighter and much more flexible — as promised. From a visual standpoint I really dig how they stamped the three stripes into it. I also love that this is a shoe that I am able to find that perfect lace fitting, double knot it into place, and then never think about again. Because of its sock-like construction I’m able to just yank them on and hit the road without constantly having to adjust my lace settings.

I will say that because of the colorway I grabbed, this kind of yucky oatmeal (adidas calls it Clear Brown), and the weather we’ve been having (plenty of rain) the toes of my shoes were instantly dirty, literally after the very first run. Now normally I am the first one to say these are runners, they were bought with the sole purpose of being ran into the ground. But when the rest of the shoe looks brand new it is kind of annoying to look down and that be the first thing you see. Guess it goes to show how well the shoe is built.

Lets talk cushion. They went and increased the amount of Boost by 20%. Wowser! I would think that it would have made for a more mushy, or even bouncier, ride. However, neither happened. Instead it was like perfect balance had been found between a plush but stable ride, and enough impact absorption. Every runner’s needs are different, so finding a balance with the cushion is nearly impossible. Some like a minimalist setup. Some like a really thick ride for long lasting cushion. These are a little bit in-between. Enough protection for longer runs, but the additional 20% of Boost also firmed up the ride enough so you don’t feel like you’re running on springs. This still may not be everyone’s cup of tea, but if you happen to be new to running and don’t know what type of cushion you prefer just yet, this could be a great place to start.

The traction might be my favorite part about the shoe. We still have that kickass Continental rubber with it’s stretch-webbed design, but this time the pattern/lugs are a bit thicker while being stacked closer together. This made it so I could fly over the gravely trails I’d encounter, instead of having to look for the more worn down paths. Yes, I’m sure the cushion helped absorb some of those rocks, but I don’t think we give traction enough credit in that department. After running in another runner with a similar cushion setup, but is missing most of the rubber used for traction, on the same pathways, I can say without a doubt that a good traction setup is a must. Also, I’ve put in close to 60 miles in these guys and the rubber still looks close to new. I can’t say that about the other runners in my current rotation.

The fit IS amazing, once I figured out sizing. I typically run in a women’s size 6.5 — including all of my past Ultra Boost models. Luckily, we were able to find these in store so I tried them on and I was swimming in them. So I asked for a 6 and that did the trick. In fact if I were going to wear these casually I would have asked for a 5.5. I can’t say enough good things about how these fit. My feet never felt suffocated. There’s plenty of room in the forefoot, but not enough to where I felt like I was about to slide off the footbed. That may be due to the wider base so when the knit did stretch, it was still a comfortable ride. When I slide them on it feels like putting on your favorite pair of jeans. There are these little pillows inside along the heel that help keep your heel in place, and I have always loved how they mold the back of the shoe so that it swoops away from your achilles. That’s such a tender part of your foot, nobody wants added pressure or chaffing there.

The heel cup is less cup and more of a frame. It’s been 3D printed and it did such a nice job that I never even missed the old TPU heel cup from years past. It’s flexible, but structured, and does a great job at keeping you on the Boost platform. There is adidas’ Torsion system at the midfoot as well. I’m a toe runner so it’s not something that I usually notice. But if you strike with your heel or midfoot then the Torsion system should prevent over-flexing and twisting on rougher terrain.

It’s very early to say this, but this might be my favorite shoe of the year. Or at least it’s tied for my top spot. I ended up running a half marathon in under 2 hours in these guys. A goal I had been promising myself I’d get to ever since I ran my very first half marathon a number of years ago. These guys were fantastic every step of the way. At $180 they are very pricey, but the Ultra Boost line always has been expensive. I’m just surprised they provided better traction & more Boost without messing with the price. If you don’t mind splurging a bit on your runners, I would definitely recommend them. Your feet will thank you later.

Now after sitting here reminiscing I think I’m going to go ahead and slip my pair on and take a victory lap. 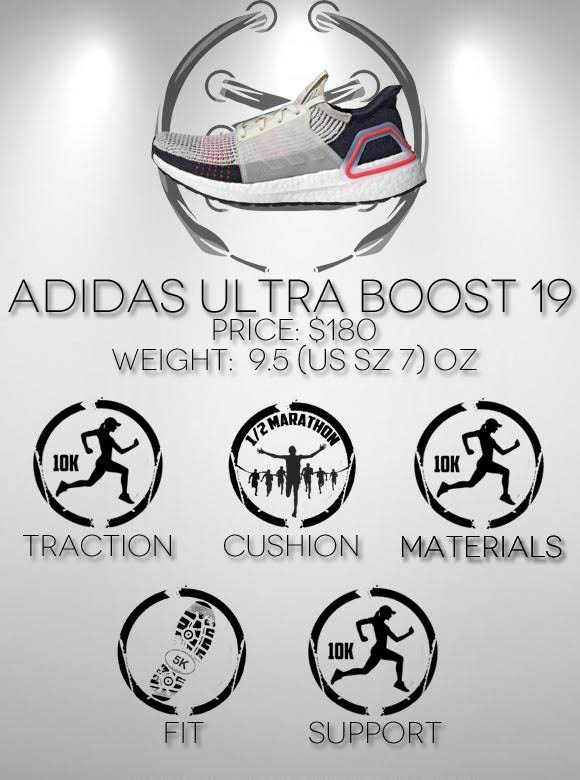