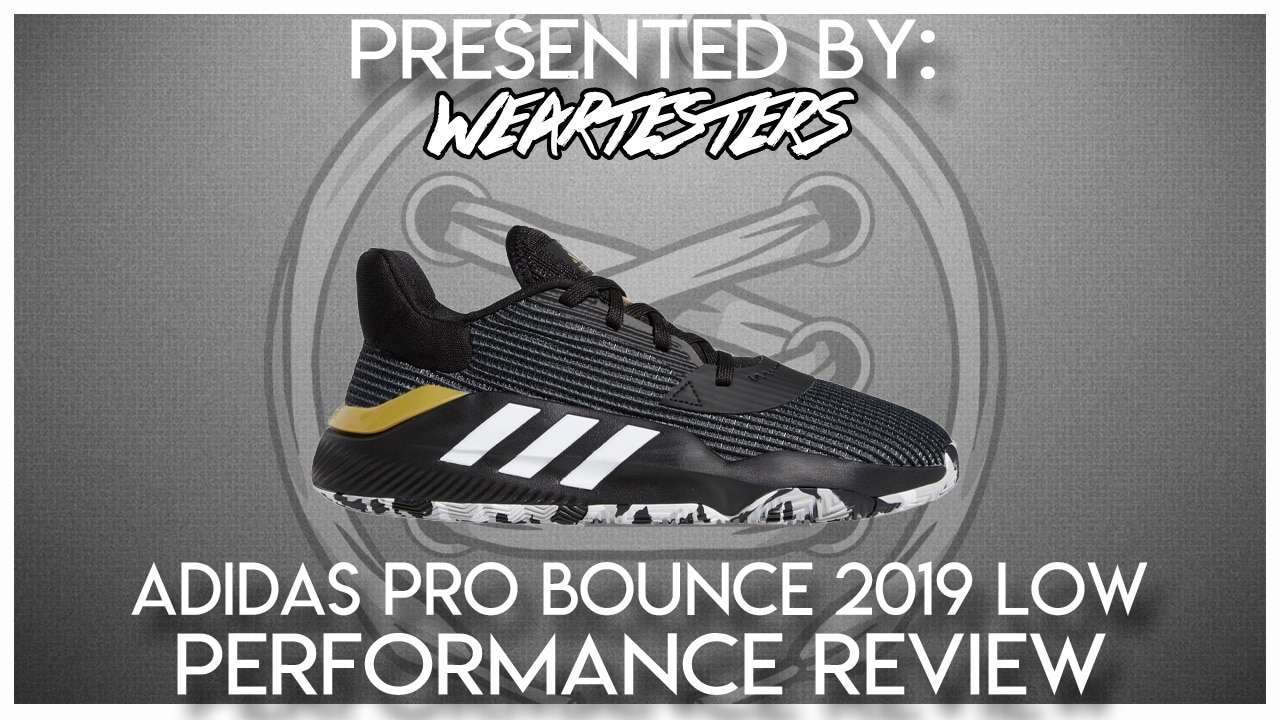 The adidas Pro Bounce Madness 2019 was tested months ago, now it’s time for the current adidas Pro Bounce 2019 Low. Were there any differences? Is it even necessary to have more than one Pro Bounce model this year? Allow me to share my experience.

You Can Find the adidas Pro Bounce 2019 Low Here

Another model, another experiment with the application of herringbone.

Deep grooved, zoned areas of the pattern make up most of the forefoot while the traction transitions away from herringbone into a shallow, tightly spaced tread at the heel. The solid rubber and unique outsole shape provided a little extra coverage and therefore a little more stopping power, especially laterally. Minus some wiping after the occasional dust buildup, traction was pretty good.

Outdoors, there was a slight drop in performance, however nothing drastic. Just remember what I said about the back half of the traction and its shallowness. If you aren’t playing on your forefoot, you’ll chew through the heel rubber in no time.

Court feel, comfort, and flexibility – I expected nothing less from this iteration of Bounce. My views on the Pro Bounce 2019 cushion basically mirrored Nightwing2303’s performance review on the DON Issue 1, so I’m thinking anyone who liked the Bounce there will equally enjoy this year’s Pro Bounce.

Impact protection is most important to me these days and there are stronger options out there in terms of impact,  yet Bounce is one of the foams I can trust to keep me feeling okay for a while when needed. It’s not my absolute favorite cushion, but one I still find enjoyable to play on and seems durable enough.

Since the less recent Pro Bounce Madness 2019’s mesh didn’t provide a ton forefoot containment, I kept close tabs on how these materials would work this time around. The verdict: A stronger textile for containment, but poorly executed as it left dead space all around the toe box, which was an odd sensation given how tightly things were between the midfoot and forefoot.

There is a fuse layer at the base of the lacing system that was a pain to break in. I’m talking PG3 break in, cramp-like feeling, but it took longer to get past in this model — bummer. Knowing that overlay could have been slimmed down, possibly even removed entirely, just turned me off from completing testing a lot sooner than I could have.

The upside is that this area of fuse does eventually break in, and when it does it completes a super nice level of overall comfort, even without internal padding. I wish I knew why adidas decided to leave the pillows out after consistently including them recently, I could have really used them in this shoe…

I try to avoid using terms like sloppy, but I’m not sure there is a better way to describe the fit of the Pro Bounce 2019. It’s mostly narrow (though not uncomfortable, sans the fuse), but once you get to the toe box there is dead space above and all around. To top things off, it runs just a touch long, leading to a bit of slipping at the heel.

Because of the fuse wrapping so tightly above the foot I’m just not sure this will work for wide footers but give them a try on if you want and are able to. As an average, maybe slightly narrow footer I was uncomfortable going with anything besides true to size – anything else would be too painful or too roomy to feel safe at all.

I wanted to love everything about the Pro Bounce 2019, but the fit was the shoes most glaring issue. Nothing I couldn’t play through, but also nothing I ever got excited to play in because of that.

Lateral stability basically overrides the lack of heel stability that came from the fit. There is an internal heel counter and external clip which wrap the heel to at least halt any side to side movement. Also, the base runs wide for the length of the shoe and the midsole forms straight up into the lateral banking barrier.

All of that is atop a low-profile cushion, so you shouldn’t feel like you’ll ever slide off the footbed. Even with movement in the heel, the Pro Bounce 2019 is secure for the most part, so I at least could manage to move around without much worry in the low.

Having now tested both the adidas Pro Bounce 2019 Madness and now the “regular” Pro Bounce 2019, I have to say they are very similar, but this pair is my least favorite of the two. Traction, cushion, and textile choice are all very good, and there is even a good balance of support and minimalism in my opinion, however the break-in and fit of this pair were difficult to overcome.

The Pro Bounce Madness on the other hand has a better fit with little to no break-in required and performs nearly as well everywhere else, making it the better option over this model – again, my opinion.

At $110, the adidas Pro Bounce 2019 will have a hard time standing out against signatures both within its own brand and externally. I do think the shoe will work best for narrow footers, but for everyone else, I’m not quite sure this is the sleeper either its 2018 or 2019 predecessor was.

You Can Find the adidas Pro Bounce 2019 Low Here