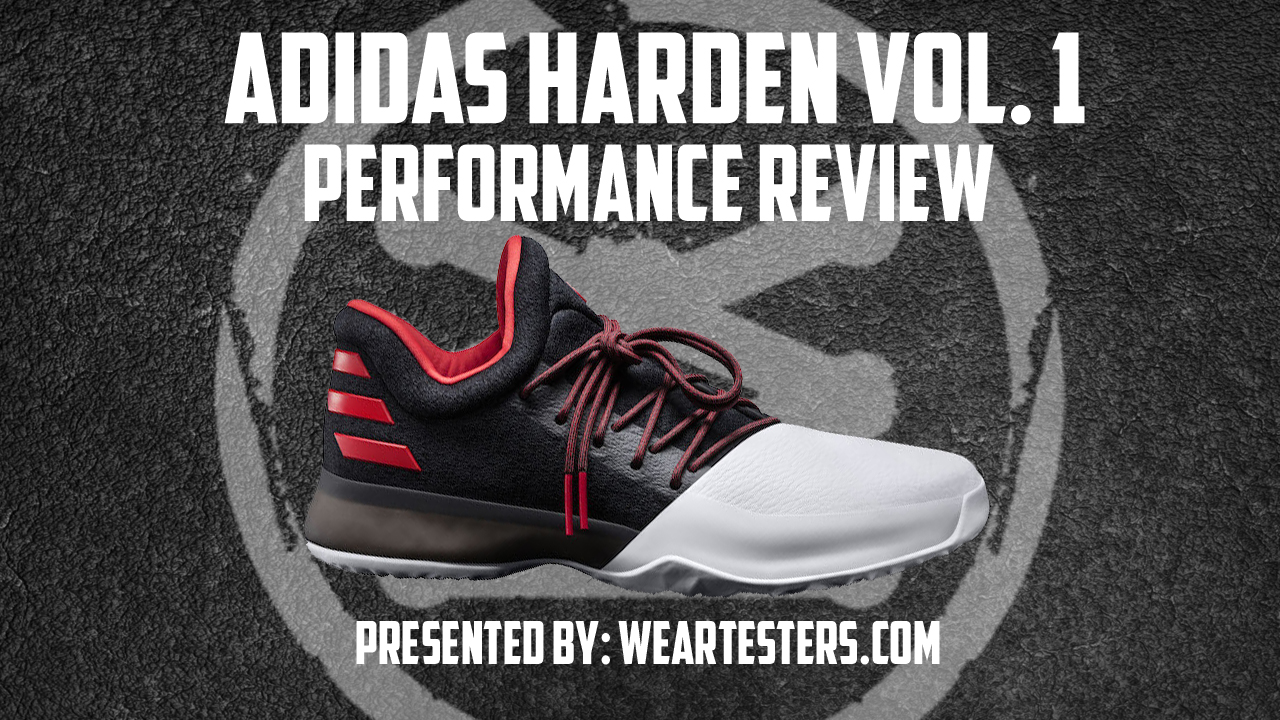 HUGE. That was the first thought of everyone when we saw the contract adidas offered James Harden. Huge on two fronts — the dollar amount, of course, and the fact that a Nike athlete, seemingly on the way to his signature shoe any day, would leave the Swoosh for the Three Stripes. Yes, money had a lot to do with it, but it showed one thing: adidas was a player in a major way. Now the question was, “What will he wear?” After a year of building hype for the Beard, we get our answer: the Harden Vol 1. But was it worth the wait? Let’s ride… 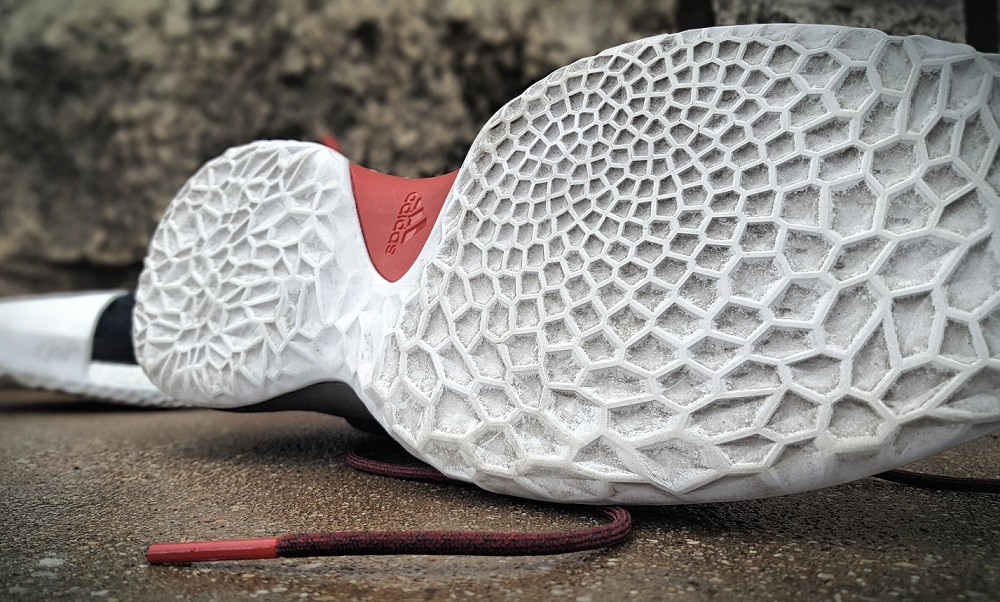 TRACTION – Yeah, the Harden Vol 1 is good. Almost great. Based on pressure mapping of his foot during Harden’s many stutter steps and toe drags, the pattern centers on a circular point under the ball of the foot and spreads out from there. I don’t play like Harden, with step backs and stutter steps — I’m more of the crossover, two dribbles and get to the hole or pull up — so for my game, it never failed, except when the dust mop magically disappeared.

On clean courts and those first steps after wiping, the pattern works as well as anything else out there, and better than most. The problem is that the pattern is thin so dust sticks early and stays late, filling up the shallow pattern. (To be fair, the only shoe that didn’t slip on this floor when it was dusty was the Under Armour Longshot, with the Curry 2 traction pattern). It isn’t the softest compound either, but it is extremely tacky, so when dust sticks it affects the shoe more than any I have tested lately. Again, when on clean courts or after a good wipe, it sticks magically.

Outdoors? Nope. The pattern is too thin and once it wears off, well, Boost has terrible traction and durability. 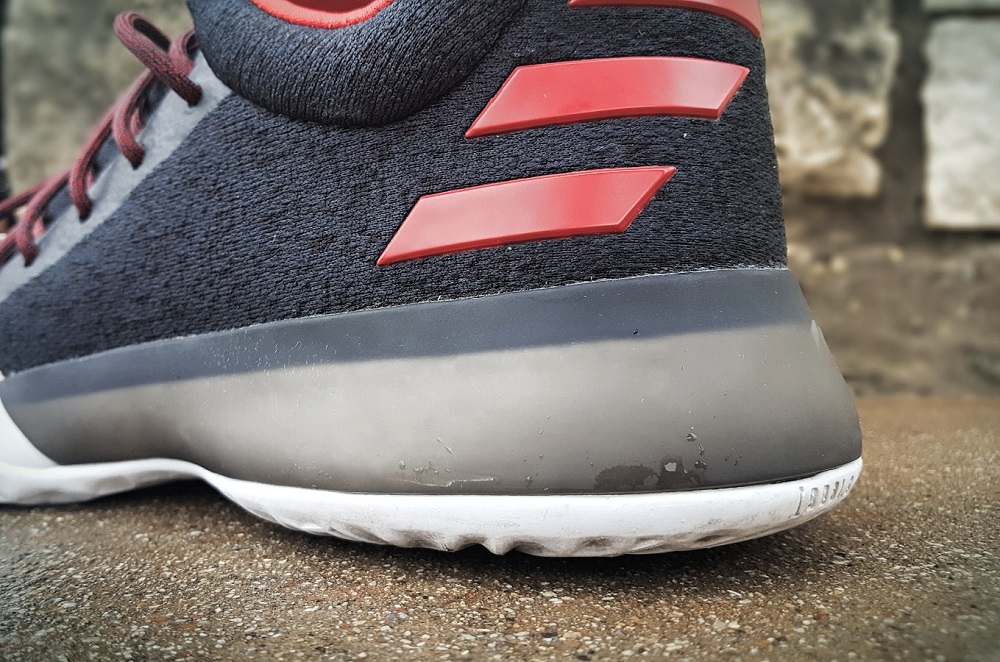 CUSHIONING – Boost with court feel? Yes, please. The Harden Vol 1 has the lowest ride of any full-length Boost shoe and you can tell, but not in a bad way. The midsole isn’t bouncy like the Crazy Explosive or CrazyLight 2016, but it still absorbs and responds like Boost should.

The TPU cage around the lateral side and heel are what keep the midsole stiff, and this is by design. adidas first tried this with the UltraBoost ST, caging the midsole on the medial heel for a support system. This TPU kept the Boost from expanding out and being uncontrollable. It also stabilized the response of the foam for quicker recovery. The same concept is used here. Say an athlete jab steps on the outside of the foot (and shoe). The Boost would push out past the midsole lines, leading the shoe to roll over laterally, causing instability and rolled ankles. Cage it, the Boost is allowed to absorb but then push up into the foot, not out, cutting lag time and recovery for the next step. Yeah, it isn’t PureBoost bouncy, but you will appreciate the stability on hard cuts and your joints still get Boost cushioning — you just may not know it. 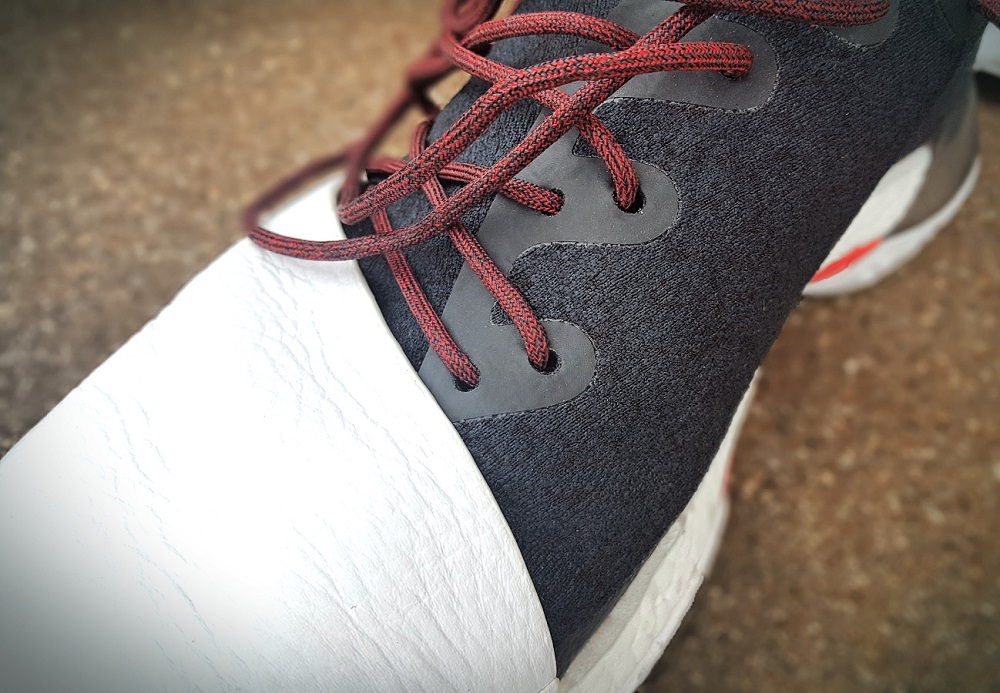 MATERIALS – Keeping with that adidas tradition, the materials you get depend on the colorway you purchase. We have seen Primeknit and suede toe on the ‘I’mma Be A Star’; we got a Jacquard upper and an elastic toe on the ‘Xeno’ colorway. This is the ‘Pioneer’ colorway, and it features a Jacquard upper with a seriously nice white leather toecap. I love leather, no secret, and this is the good stuff. If other brands used this, premium pricing would make sense. Some have said the toecap needs a couple of wears to break in and feel natural, but mine were good for me right out of the box. Yeah, it wrinkles and scuffs, but that builds character, in you and your shoes — it shows the work you put in.

The midfoot and heel use a soft Jacquard that, honestly, feels as good as Primeknit (in this model). Soft and already broken in, the materials should be durable enough for a season of play (normal play). The tongue and heel areas are heavily padded, at least around the top, and work well to lock the heel in solid, unlike the CrazyLight 2016. Fused areas around the lace holes keep prevent ripping and work to keep the round laces from sliding back and loosening the sneaker. I say “work” because they have to, but round laces don’t like staying tied. Maybe, switch those out. 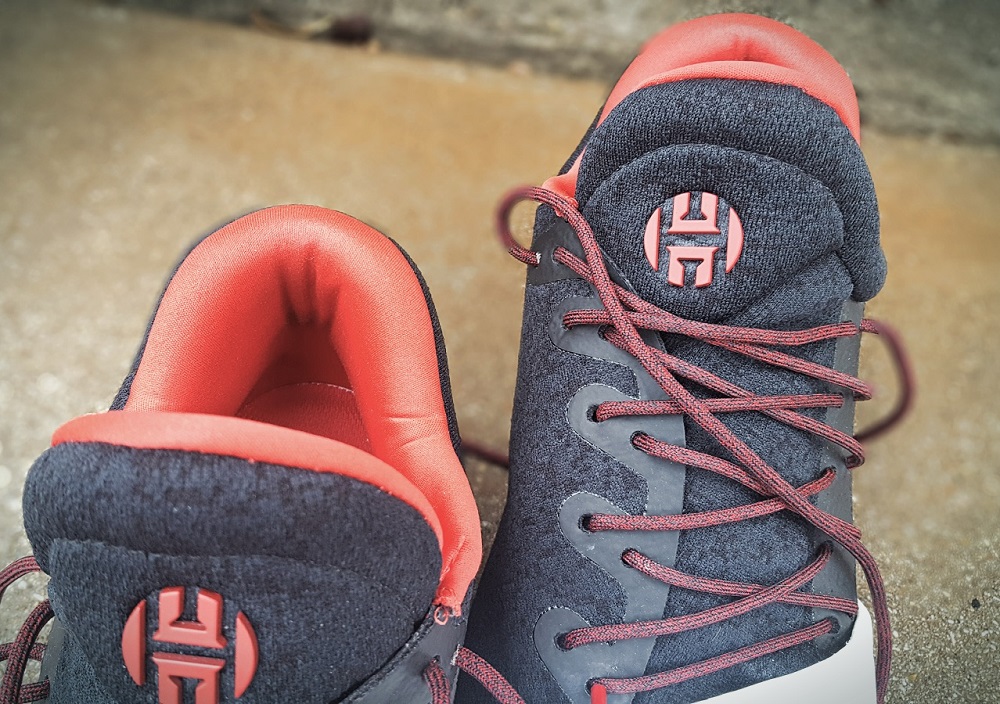 FIT – There are many theories around the message boards and comment sections about the fit of the Harden Vol 1, and it is adidas’ fault. One shoe fits small, the other one long, and they are the same size. The Harden Vol 1 fit me perfectly true to size, but half size down is perfect if you need that one-to-one soccer fit (some said they went a full size down — no way).

The toebox is wide and squared so you may not want the extra room for foot splay (your toes spread when you land). However, when playing there is no movement in the forefoot even with the extra space — just lace tight. The midfoot is locked in, and the Harden Vol 1 is narrowed through that area. Coupled with the way-high arch, it keeps your foot where it should be. Heel lockdown was the main worry, as it is in almost all lows, but as mentioned above, the heel is heavily padded (especially around the collar) and the heel is solid. The burrito tongue wrap locks down and back, pushing your heel into the counter for extra non-slippage. 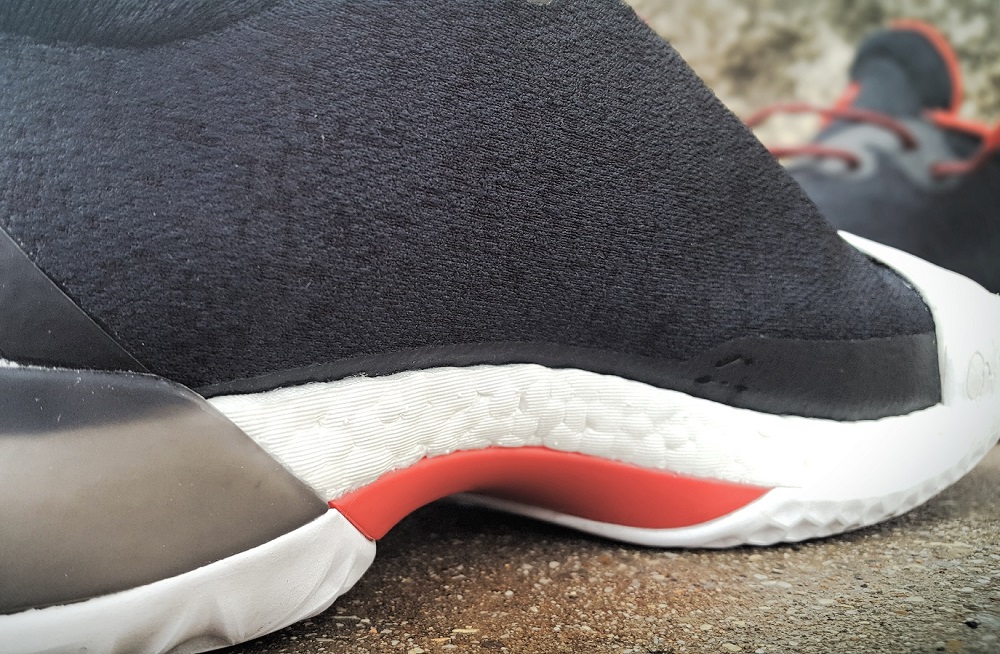 SUPPORT – Let’s start with the most pressing matter: the arch support. It is high and presses under your foot, but not in a bad way, just an extreme way. It took a couple of wears to get used to, because I have a slight pronation (meaning my ankles turn in and my feet flatten out when running). If you have normal feet you may never notice, but just be aware. adidas has had great midfoot support for years, ever since the Torsion Bar system, and the Rose 7, Explosive, and CLB2016 are all great in that area. Now, the Harden has joined them.

The forefoot doesn’t have a designed and defined outrigger but the base is wider than the upper and fairly flat so stability in that area is a no-brainer. Couple that with the caged Boost and lateral steps and cuts become solid. The heel is also wider than the upper, so jumps that start well but don’t end that way are covered as well. The Boost is caged there to keep the midsole from teetering or bottoming out — even more help.

Transition was a surprise, because the Harden Vol 1 is heavy and feels clunky in-hand. The full-length Boost keeps heel-to-toe smooth and the arch makes you want to stay on your toes. With the great traction — when the floor is at least semi-clean — the shoe just flows and moves with your motion like it was built for it. Oh, wait, it was. 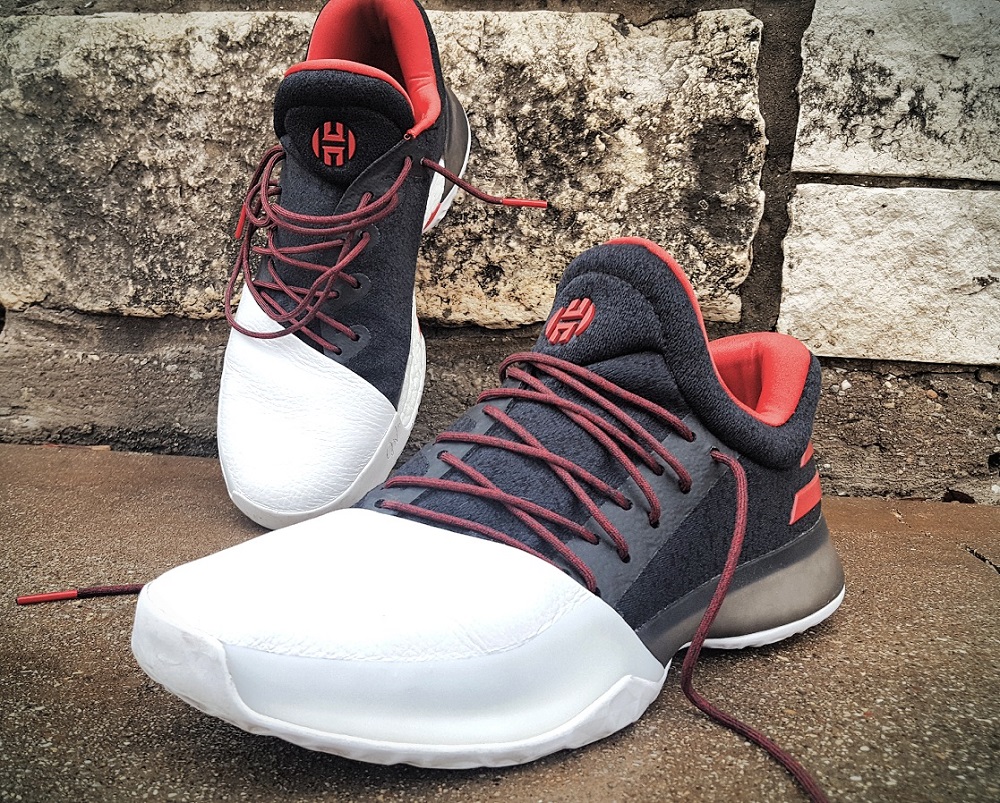 OVERALL – The Harden Vol 1 has been a hit since the first pictures, based on looks alone. Polarizing, different, obnoxious, different — all exactly what Harden and team Three Stripes was going for. That toecap says it all.

If you are a guard, or forward, or big man who doesn’t mind lows, you will enjoy this shoe. Fit, cushion, traction, and support are all nice for anyone unless you just feel like you need a super-light shoe (you don’t). For running gunners, stutter steppers, and jump shooters, the Harden Vol 1 may be the best shoe on the market for everyone. The traction could use a little more bite, but it works — and that is severe nitpicking. If you can find a pair, grab them now before he wins MVP and you can’t find them anywhere. Just keep killing it, adidas. 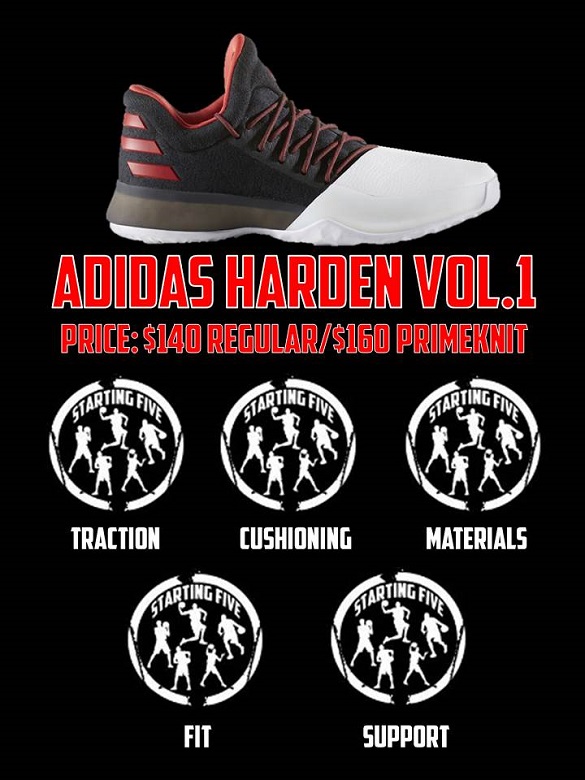