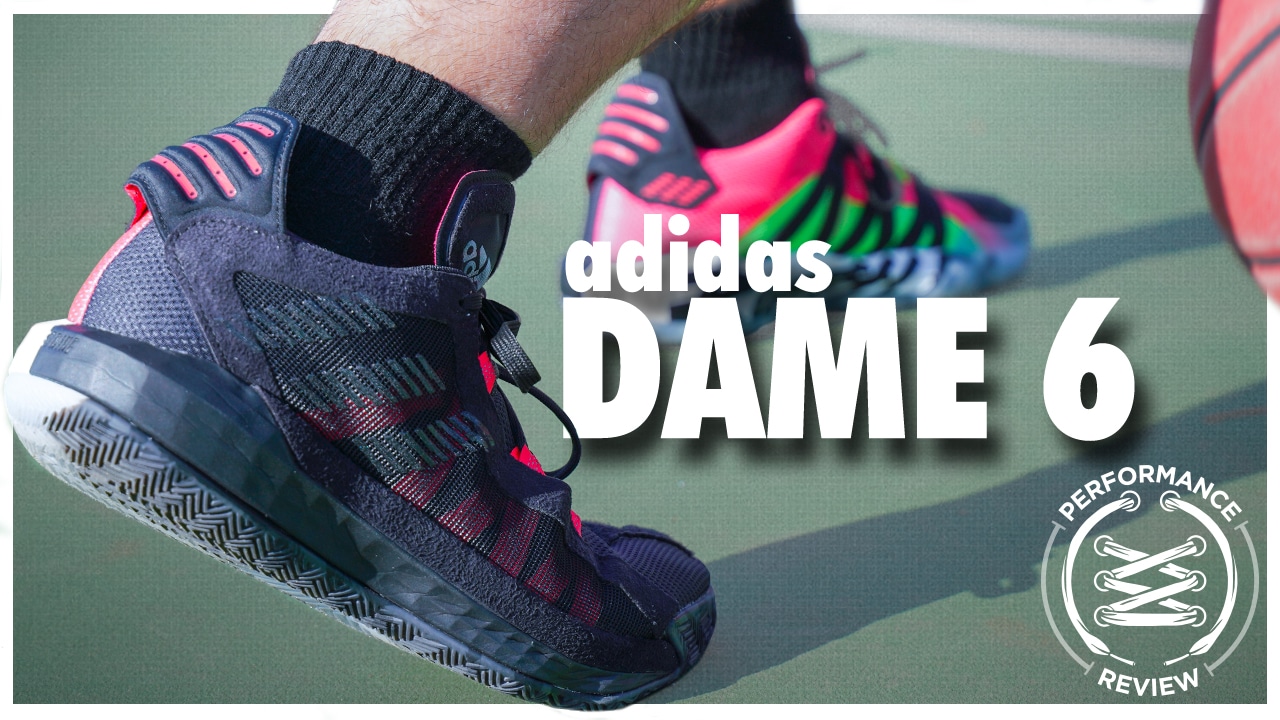 The adidas Dame 6 is our first performance review for 2020. Did it enter the new year on a positive note? Lets find out…

Buy from Adidas Buy from Dick’s

Herringbone from heel to toe — typically a tried and true setup. Unfortunately, this wasn’t the case for me when it came to the Dame 6. I had high expectations as the Dame 5 featured a very similar setup that I loved.

However, there were plenty online that claim the Dame 5 was slick and lackluster. It’s always hard for me to know if online comments are truthful or not as we’re in the age of the troll when it comes to leaving anonymous comments. Luckily I had a personal friend of mine complain about the issue with the Dame 5s which made me believe the majority of what I had read. Now, I’m the one complaining about slick traction as the Dame 6 was simply awful for me.

I only had good traction on the Lifetime court I play at. Every other court, from the local high school to 24 Hour Fitness — the traction was as slick laterally. Liner movements had some decent bite, but I still had to wipe every chance I got. When I would wipe it wasn’t the typical quick wipe and continue playing. I literally had to stop in my tracks, lift my foot up and rub my hand up and down — watching the dust clumps fall as if it were the North Pole.

Lightstrike is used for the first time on a Dame signature model, and I didn’t hate it.

I say this because I wasn’t a fan of the Lightstrike in the Harden Vol 4, but I loved it in the adidas N3XT L3V3L. This time around it was a bit more in between the two aforementioned models. Not too thin, but not too thick. For a shoe that was designed for guard style play, this was just right.

Bounce is still my preferred cushion setup from adidas so I hope they aren’t beginning to phase it out. With the Dame being adidas’ annual budget model featuring Bounce, we may not see it again on a main signature model — at least not for a while.

Transition was smooth as butter and impact protection was very nice overall. Court feel wasn’t lost and I never felt slow or laggy due to sinking into the footbed. It may not be Bounce, but it’s pretty close to it.

Materials featured on the adidas Dame 6 are primarily textiles. They feel and play cheap.

It was something that was a minor concern in my initial first impressions, but I was hopeful that they’d play just fine. I wouldn’t say the materials killed the performance or playability of the shoe at all, but the durability definitely took a hit.

My left shoe’s outsole is peeling away from the upper. Either the glue job was poor to begin with or the type of glue used isn’t strong enough to bond to textiles properly. I find the latter option to be a bit far fetched as adidas is no stranger to gluing outsole and midsole tooling to textile builds. But, for whatever reason, the shoe looks like it was run over and this is a primarily black shoe. If a black shoe is showing signs of wear this bad, on top of falling apart, then something went wrong.

I bought two sizes — one in my true size and one 1/2 size down. The pair that was 1/2 size down is what fit best so that is what I’d recommend for most.

Lockdown was okay, but nothing noteworthy. The heel area couldn’t keep the heel in place properly either — which is not a good thing when it comes to support.

It would have been better had the materials not buckled under certain movements and my heel been properly locked in. The wide base is nice and saved my ass when making lateral cuts and changes in direction without feeling cumbersome underfoot.

However, having a solid wide platform is only a piece of the puzzle when it comes to support. The shoe should have a little of everything — and each of those things should work in unison with one another. The Dame 6 has pieces, but not every piece works perfectly, thus the unity that most basketball shoes have… these do not.

Traction should have been much better than what it was while support could have been better as well. Fit needs work and the materials are as cheap as they come. Even at $110, this is not a shoe that I can say offers any bang for your buck. At least, I didn’t feel like I spent $110 on a solid product and that’s what these reviews are about. Helping others figure out what they need/want out of a shoe and helping them understand if a shoe offers enough bang for the buck (retail price).

Everyone has a bad day at the office, and I still enjoy the Dame 2 through 5, so I hope this is just a hiccup in the line and not an indication of what’s to come moving forward.

Buy from Adidas Buy from Dick’s