You know what time it is! Dame 4 time.

You Can Find the adidas Dame 4 now at Eastbay.com

Sarcasm aside, the pattern worked and it worked really well. It’s aggressive and provides coverage in multiple directions. The channels are placed wide enough apart to allow any dust that may be present to pass on by — like the passage of time. Dust may get stuck in the areas of the pattern that are pretty tight but it rarely happened — and my local 24 is really dusty all the damn time. If dust got in the way I quickly wiped it away and forgot all about it until it happened again. Which, again, rarely happened.

Would I play in the Dame 4 outdoors? Probably not. I don’t think the pattern would last very long and the rubber is on the softer side. I did not take them for a spin outdoors so I’m not sure if it works well. However, indoors they are awesome.

Cushion /// Same cushion setup and implementation as the Dame 2 and 3, but the Dame 4 gets even lower to the ground than ever before. Does this mean that you lose some of the feeling that Bounce brings to the table? Yes. There is less “bounce” to the Bounce, at least in the forefoot. This section sits very low to the ground. While this does sacrifice some cushion, you’ll gain greater court feel which allows you to feel as if you have a quicker first step. Meanwhile, the heel still feels like the Bounce that you and I have come to know and love.

Luckily, Bounce is good enough that it can sit lower to the floor without making you feel like you’re playing in a super firm cushion. While you’ll notice that it isn’t quite as plush as the previous versions, you’ll also notice that it isn’t as unforgiving as other low profile setups like Phylon, basic EVA, React, and Charged.

Materials /// The materials will differ between colorways — which I find annoying — but the builds that I typically prefer are the textile ones. This year, mesh is back and it’s an open celled mesh that allows for much better air flow than what we received on the Dame 3.

Within the mesh are black wire threads that add strength against stretching while a PU spray coats the textile to give it some additional strength against abrasion. These materials break-in nice and quickly without losing any strength afterwards. This was a trait that they have in common with the Dame 3. Yet, this time around the material doesn’t feel as plastic-y — something some didn’t enjoy when comparing the Dame 3s TPU infused knit to something like the Crazy Explosive’s Primeknit.

I tweaked my ankle the night before I swapped to the Dame 4 (after someone undercut me while I went to land after shooting the ball). It’s the same damn ankle that gets tweaked nearly every time someone does this to me and I usually wear my brace afterward to help keep things in place while it heals.

Unfortunately, I couldn’t fit my foot with a brace inside of the Dame 4 (if you wear a brace regularly you may want to consider bringing the brace with you to a retailer carrying the shoe so you can see what size works best) so I decided to just play without the brace — I told myself I wouldn’t “play hard.” Which, if you play pickup ball regularly, means that as soon as someone asks you to run you’re about to play much harder than you told yourself you would.

The compression from the collar worked so well that once things warmed up and got loose I was pretty much good to go. Something I haven’t experienced in any shoe — ever — and I’ve worn a lot of shoes over the years.

Now, I’m not saying this area will solve your ankle issues. All I’m saying is that the compression here is real and it was able to replace what I would have been using my brace for (compression). I know some will read this and think I’m saying you can throw away your brace. Not what I’m saying at all. I simply tweaked my ankle and these supplied me with what I needed in order to play while things were still tender. Compression.

Fit /// I own two pairs of the Dame 4, one in my usual size and one 1/2 size down. I prefer the 1/2 size down. Those with wide feet may want to go true to size — the slight bit of extra length will likely accommodate your wider foot once the materials and midsole break-in. As always, try the Dame 4 on in-store to be 100% sure that the shoe’s fit will work for you.

Lockdown is incredible. Half of this is due to the compression collar while the other half is due to the lacing. The cables that make up the eyelets on the Dame 4 are really strong as they’re coated with rubber. Once you’ve got the lacing done up in a way that you like then you’re pretty much set and won’t feel the need to re-lace them at all.

I’ve only experienced heel slip in the original D Lillard 1 and I cannot speak on that with these. To me, the entire shoe fit me perfectly 1-to-1 and felt like they were made for me. Heel slip is something that usually comes with sloppy fit or because the wearer isn’t wearing their true size. Again, I’ve only had this issue with the original Dame’s and it was due to the heel being very sloppy all around. Ever since the Dame 2, I’ve loved the way they fit — so long as you make sure you’re wearing your appropriate size.

Support /// This is where the Dame 3 and 4 are similar, but also where you can really feel the evolution between designs. Much like the Dame 3, the Dame 4’s midsole wraps up and around your foot ensuring your foot remains on the footbed where it belongs. The difference here is that the midsole sculpt isn’t as exaggerated — dare I say, it’s minimal in design — yet still pulls off the same effect.

I think having the Dame 4 sit lower to the ground also helped designers keep the midsole sculpt leaner as you don’t need too much cupping action when you’re not too far off the floor. Combine the midsole sculpt with a fairly flat and stable base, extended lateral mold offering a more natural outrigger, internal heel counter, midfoot torsional shank (internal), and a wonderful 1-to-1 fit and you have yourself one hell of a shoe.

Overall /// The adidas Dame 3 was my current top pick for 2017 (it released late December which pushes them into the 2017 lineup) but the Dame 4 just replaced them. It offers very similar performance features but you can feel the evolution between the two after playing in them.

I’d say the biggest difference is that the Dame 4 isn’t as heavy/bulky/clunky feeling when compared to the Dame 3. Otherwise, they both offer the same stuff. Cushion is slightly better in the forefoot with the 3, but Bounce is so good that it still works well when it’s thinned out a bit.

The Dame line continues to be the best signature you can get for your money. Bang for your buck like no other. You know what time it is. Dame time. 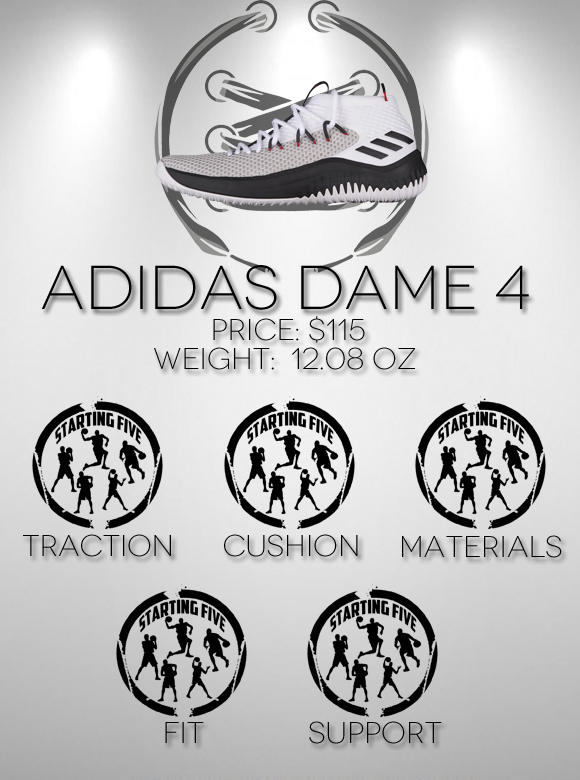