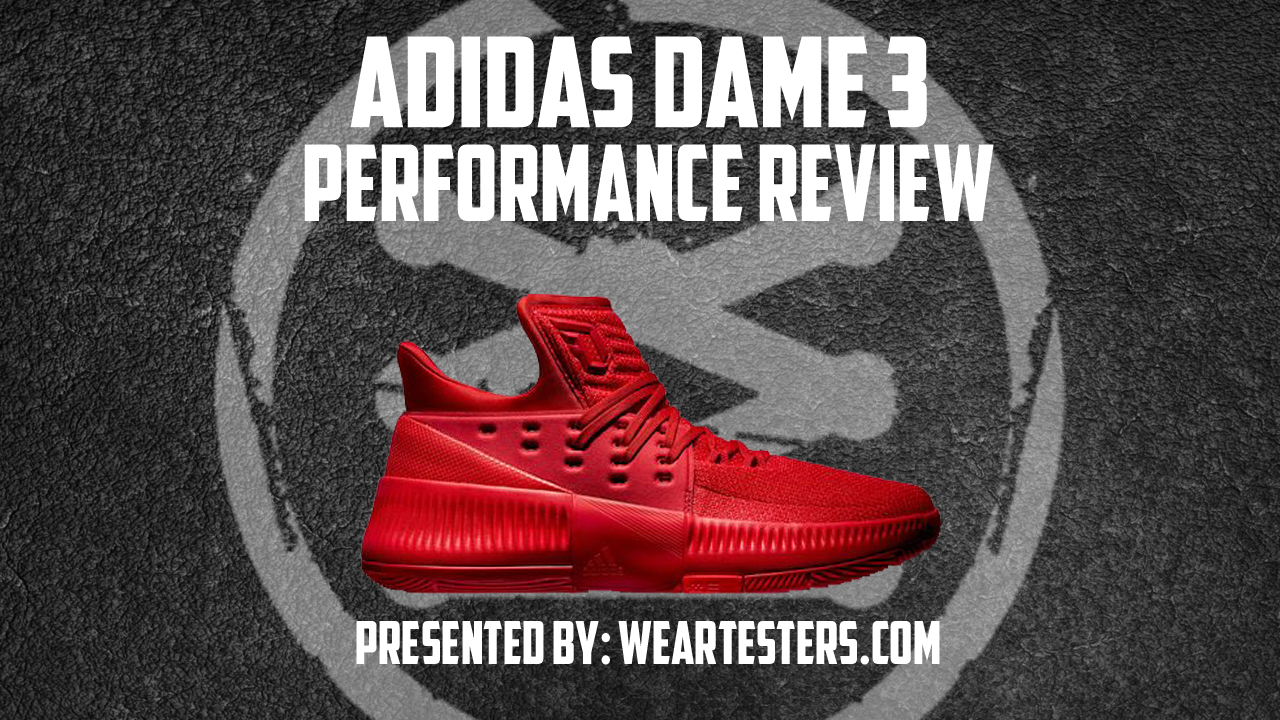 A worthy successor to the D Lillard 2, the adidas Dame 3 is an absolute beast on-court.

Traction /// Blade traction replaces the storytelling design featured on the D Lillard 2 and this setup works beautifully. Much like herringbone, blade traction offers multi-directional coverage for almost any move you can think of. No matter what your feet are doing on the hardwood, the blade traction should have you covered.

When dust is present you’ll need to wipe periodically, but nothing like what you may have experienced with the D Lillard 2. Interestingly, this blade setup is also telling a story. The designers mentioned that Dame’s grandfather would nail a milk crate to the telephone pole outside of their Oakland residence where he would learn how to shoot the ball — functional and tells a story. So it is possible…

Yes, that last bit was sarcasm.

Cushion /// Bounce makes a return to Damian Lillard’s third signature model and I couldn’t be happier. I don’t know how adidas is able to make such a well cushioned foam and have it retail for as little as it does. It really makes me wonder if I’ve been getting ripped off by competing brands that charge premium prices for foam cushion that isn’t all that expensive to manufacture. However, I’m pretty sure I already know the answer to that.

If you’re looking for a cushion setup that adds a spring to your step, while still maintaining plenty of court feel, then Bounce is one of those options that you should heavily consider. I don’t say this because of the Dame 3’s price point. Bounce cushion works, plain and simple. It works without breaking the bank — that’s just an added bonus.

Materials /// Fuse mesh makes its way onto the adidas Dame 3 and it’s a pretty cool material choice. The areas where you’d usually see an overlay are heat welded together with the mesh itself as it’s coated in TPU. This reduces layers and weight without giving up any durability or structural support. At first, I was slightly worried that I’d feel as if I was wearing a shoe made of plastic in the same fashion that I do when I wear other TPU-based materials, but I quickly realized that was a non-issue. Yes, the mesh is made with plastic. No, it doesn’t feel like your wearing plastic.

The midfoot overlay that houses the lacing structure, or what I like to call “the napkin,” works well. I know it doesn’t look pretty, but it works remarkably well. It allows the wearer to customize the lockdown of the shoe no matter the foot shape. It’s a really great addition to the upper, despite what you might think about it’s aesthetic appeal.

Fit /// I would recommend you go with whatever size you wore in the D Lillard 2 for the Dame 3. I loved how the D Lillard 2 fit with a 1/2 down. Wide footers were generally good to go going true to size.

The Dame 3 I wore during testing was my true size and the length was slightly longer than I’d like in the toe. However, the napkin held my foot in place so well that the tiny bit of additional length was something I never noticed. The same could not be said for when I played in the D Lillard 2 in my true size. That napkin was a perfect addition to the shoe and aids in lockdown to the point to where I wanted to give it a WearTesters Hall of Fame badge, but because the fit is just a tad long I stuck with the Starting 5; the Starting 5 badge is nothing to complain about, for those of you that wrongfully think that if something doesn’t get the absolute best grade or badge possible then it must not be worthy.

Support /// The support of the Dame 3 is greatly improved when directly compared to the D Lillard 2. It features all the typical support aspects that you’d require in a shoe: TPU midfoot shank, internal heel counter, great lockdown, and a nice stable platform to work with. Where the shoe surpasses the D Lillard 2 is within the midsole itself — quite literally, within the midsole.

This area of the shoe cups or cradles the foot and it’s something that most shoes should do. Maybe not to the extent that the adidas Dame 3 does, but the midsole should engulf the foot a bit to ensure that you and the shoe are one. Otherwise, you risk having the feeling that you’re riding on a platform that just wasn’t made for you or your movements. If you were one of those that complained that the D Lillard 2 felt like it rode too high, this is the shoe that will remedy that feeling.

Overall /// The adidas Dame 3 is a great sneaker. It’s very well rounded in every category and it will accommodate most players and foot shapes. For those reasons alone, the Dame 3 has quickly become a go-to in my lineup when I’m not testing something, or for those nights that I wind up testing something that sucks — *cough* Kobe A.D. *cough*.

From the traction, to the plush and bouncy cushion, to the materials that balanced durability without the need for break-in time — the adidas Dame 3 has it all. It isn’t the Three Stripes’ lowest priced sneaker, but it is the brand’s lowest priced signature sneaker. It just doesn’t play like it’s the lowest priced. Competing brands should take note. This is how to make an affordable signature sneaker without leaving out all the good stuff. 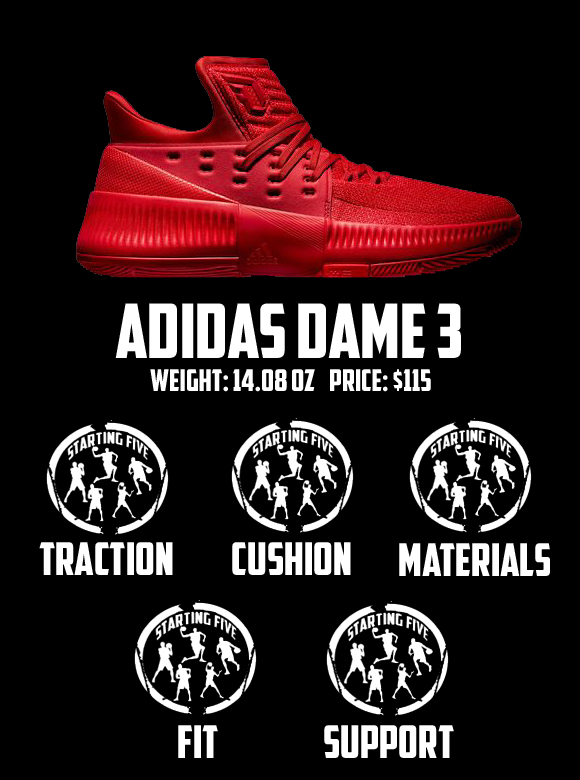