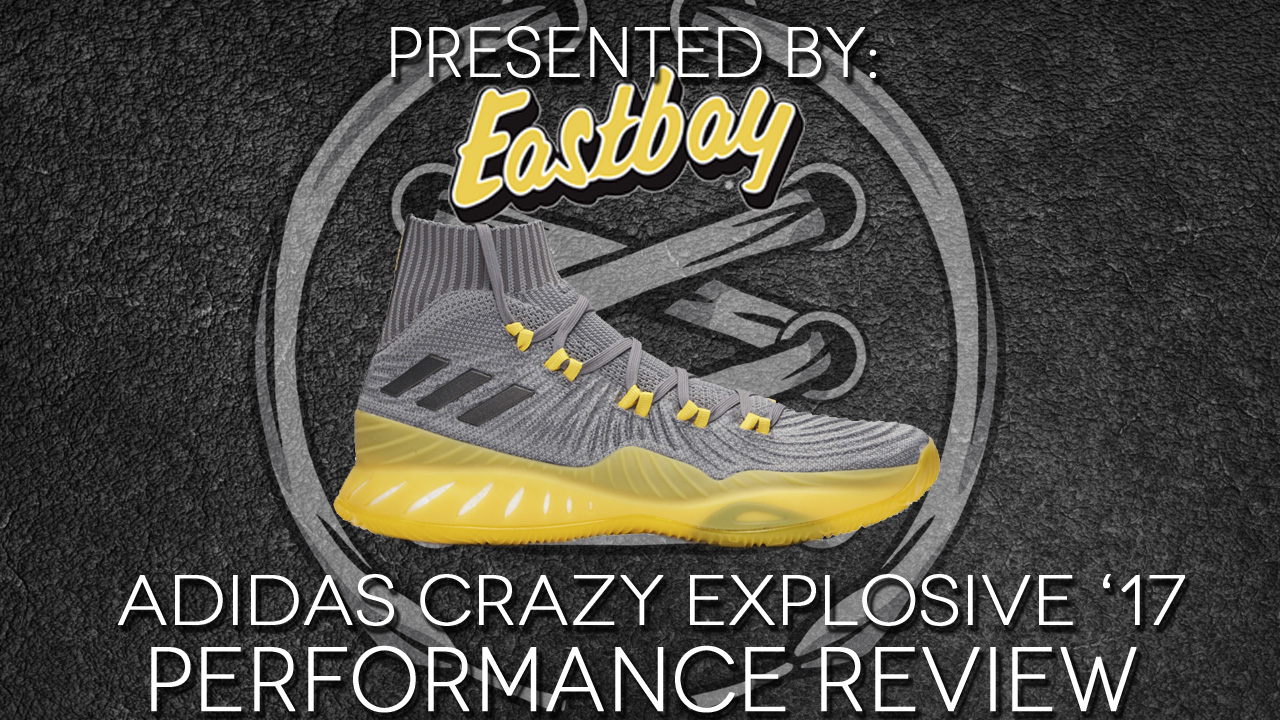 Unbelievable. That was the word several people used when they played in the adidas Crazy Explosive 2016 last fall.

From the super-comfortable and form-fitting Primeknit upper to the full-length Boost cushioning, almost every aspect of the CE16 was beast. How do you improve on that killer performer? That’s a serious dilemma, but just a few years ago Three Stripes told us “anything is possible.” Here. We. Go.

You can Purchase the adidas Crazy Explosive 2017 PK at Eastbay.com 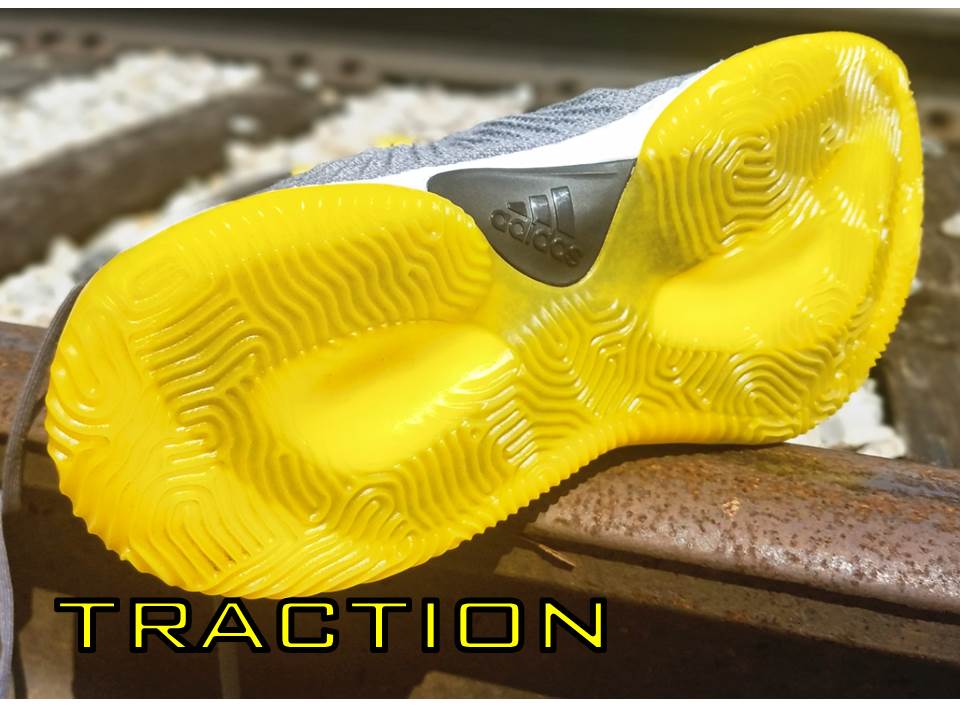 It’s the same exact setup as the 2016, which if you wore last year’s model, you know this isn’t a bad thing for performance. The “brain-coral” pattern grips any and everything like a ‘roided-out octopus — as long as it lasts, and there be the downfall.

The translucent pattern is sticky and grippy but begins wearing down quicker than most. The 2017 wears a little slower than the 2016, but after two weeks of playing (played Monday full court for five games, Tuesday 3 on 3 for four games, Wednesday full court for four games, Thursday full court for three and two games of 3 on 3, and repeat the next week) the soles are showing some rounded edges and rubber pulling off. It is only around the edges, not under the main contact areas like the balls of the forefoot and the heel, but if you are on a rough surface this traction will be gone.

On clean, indoor courts, enjoy. Seriously, for that surface, this is one of the top patterns, perhaps ever. No wiping, either, as the grooves pushed dust to the edges and off while playing. Someone used their brain on this pattern. 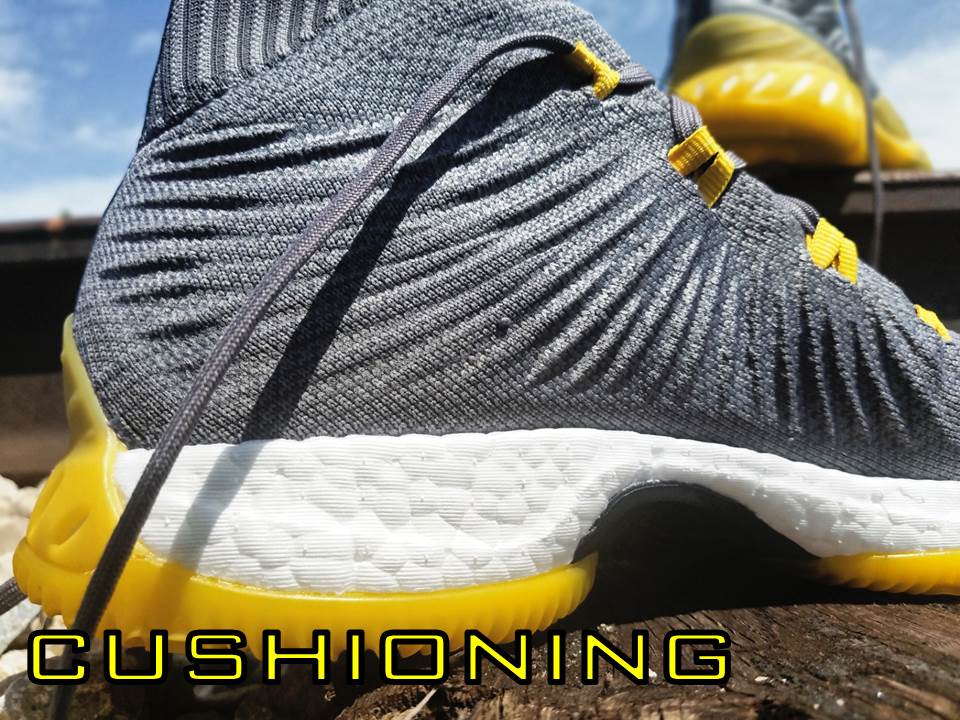 How does a shoe with full-length Boost not get Hall of Fame in cushioning? Boost is life. Usually, I would agree, but the forefoot just felt a little…off. No doubt, impact protection is second to none, and response is solid, but the Boost feels stiffer. After the pillowy goodness of last year, this was a definite change, but not necessarily a bad one. By making the Boost stiffer, or maybe it is the rubber lateral cage that is thicker, response time is quicker while still keeping the up and down impact protection.

If you don’t know, here is how shoes like the Explosive and Harden Vol. 1 work: the Boost is compressed upon impact, absorbing the down force, and is designed to push it back up to the foot. However, if the Boost is allowed to compress unregulated, it will eventually bottom out, leading to a slowing down of reaction time.

By caging the lateral side, the Boost can’t push out and bottom out, meaning it is forced to push back up. This is why a shoe like the Harden LS feels so cushy, but the Explosive, with the same Boost, feels stiffer and quicker. All in all, the Crazy Explosive 2017 PK is quicker on-foot and on-court than the 2016 with the same great impact protection and energy return; it just wasn’t what I was expected when compared to the softness of the 2016. 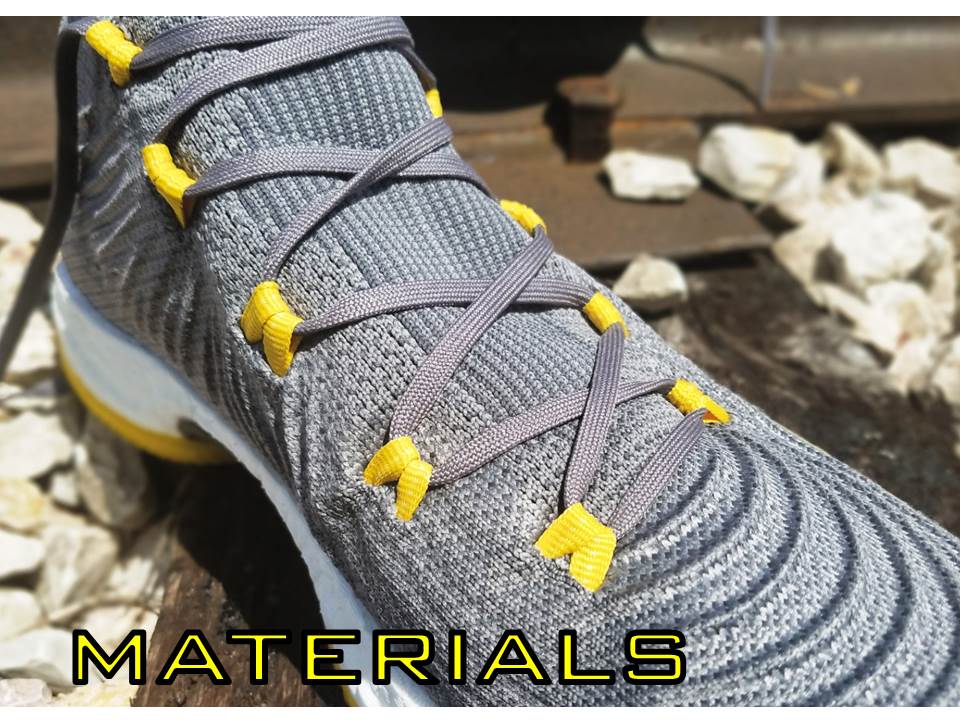 If you enjoyed the soft yarn Primeknit of the CE16, well, go by another pair and keep playing on. The CE17 is built with forged Primeknit and it is way different.

The knit is still flexible and form-fitting, it just doesn’t stretch as much while playing, which is great. Stretch leads to bad fit and instability, which leads to injuries. The Forged PK is molded all around with shark gills, the raised areas you see in the pictures. These “gills” tighten the knit and provide a severely locked-in fit while still letting the upper flex and mold around the foot without too much movement and stretch.

The downside of this forged Primeknit is the texture. The CE16 had that thick yarn UltraBoost upper that felt great to the touch — plus, it was soft and ventilated. The Forged Primeknit feels more like a jacquard — smooth surface with a harder finish, not glued, just sturdier.

The only real areas of give were the ankle collar and tongue area (there is no tongue in a one-piece upper, but there is a tongue area). This is good, otherwise you would never get your foot into the shoe. Even with those areas of stretch, the CE17 is still a pain to get on. Not LeBron 13 or KD9 hard, but harder than a knit shoe should be. The tongue area is really the only part of the CE17 that fees like the 2016, so if you are nostalgic, there you go. 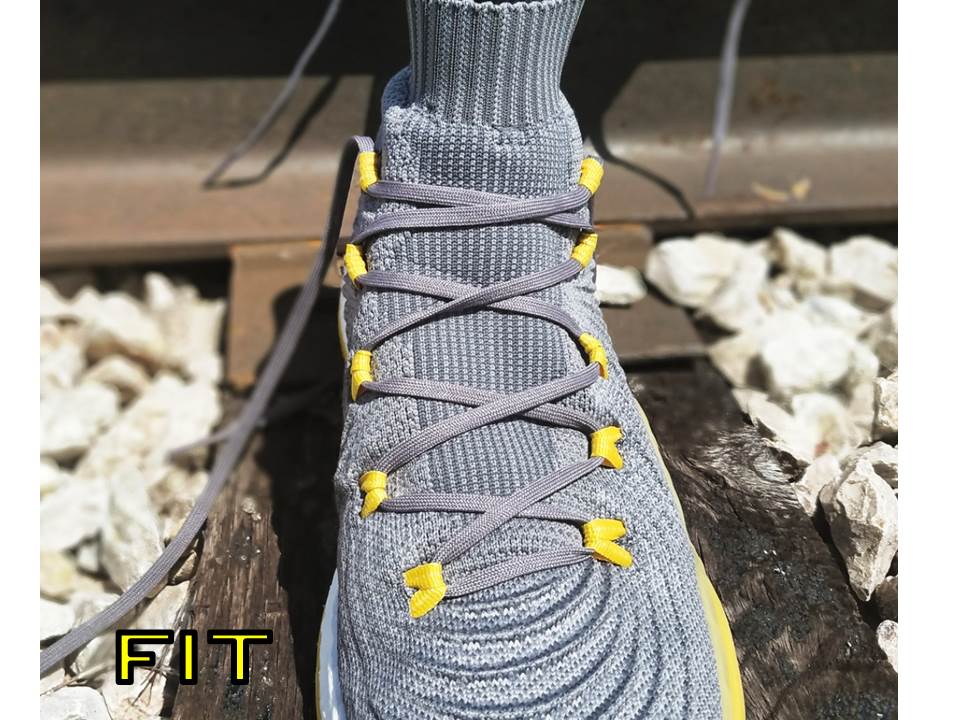 Perfect. Nothing else should be said, but I’m going to go ahead anyway. The reason the shoe is so hard to get into is because of the improved fit, and it starts with the padded ankle area. adidas added thick interior padding just below the knit collar line that is formed perfectly around the joint, filling any empty spaces the knit won’t form to. As mentioned in the Materials section, the knit in the forefoot and midfoot is still soft enough to form and flex but has very little stretch and give, keeping the upper in shape while playing.

The main reason the Crazy Explosive 17 PK fits so much better is the lacing. Going from four to five eyelets probably wouldn’t make much of a difference in most shoes, but it is all about the placement of these five eyelets. Instead of four eyelets placed from the toes to the ankle, the five eyelets run from just behind the toes to just before the ankle so there is more lacing in smaller spacing. That leads to better lockdown. The lacestraps are aligned wider going into the midsole as well, meaning more of the shoe gets pulled up and around the foot for even more lockdown!

As far as length and width, unless you have a really wide foot, stay true to size. This will give you a snug,1:1 fit with very little extra length in the toes. If you like some room you can go up a half size with no issues (that’s what I did) and forefoot and heel lockdown is still great. 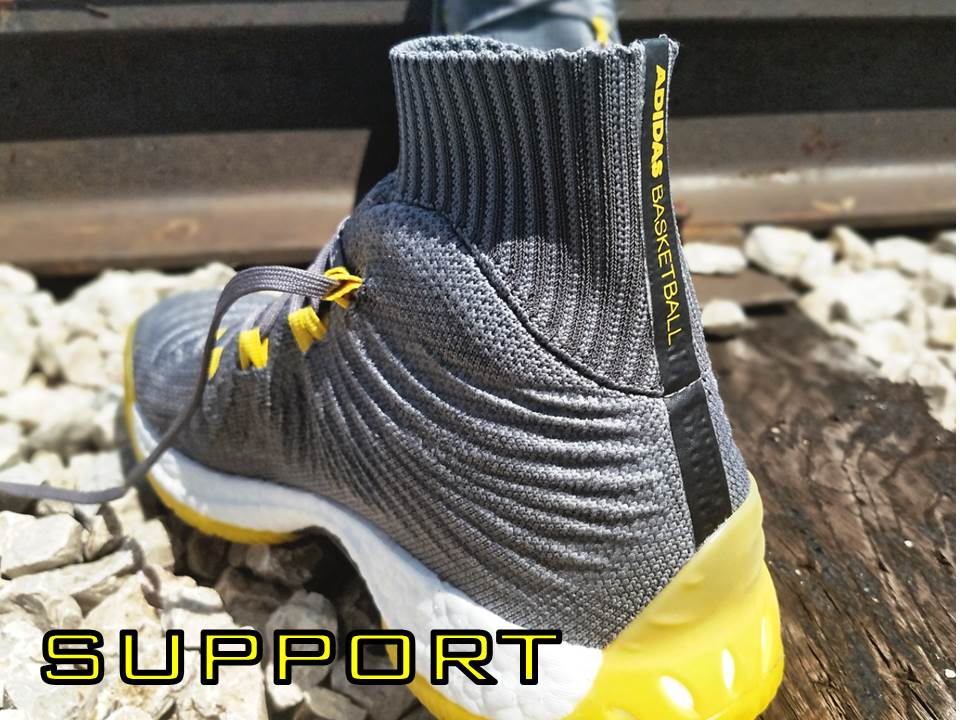 Let’s start at the bottom with the infinity shank plate, which made its debut last year on the CE 2016. The crazy 8 plate is a TPU shank that runs from the heel to the toe but is open in the middle, allowing for the Boost to still perform and cushion while making sure the foot doesn’t bend in ways it shouldn’t. The way the plate runs gives a solid platform for landing as well, since it ties the forefoot and heel together, stopping any twisting on off-center jumps. It also works with the Boost midsole, providing some extra spring in the energy return department.

The heel counter is really low and really soft. No chance of discomfort from sharp edges, since the edges are barely noticeable. The cup runs just around the bottom of the foot and barely past the heel to provide very little in stability.

The ankle is cut high but as anyone who has worn a knit collar will tell you, there is no extra support from yarn. It just helps with fit and it looks really cool.

With all that said, how did the Crazy Explosive rank a Starting 5 in Support? Easy: the wide base and caged Boost. The midsole sticks out well past the upper, giving you a wide, solid base for planting on defense or on jumper. No outrigger is used, at least not in a traditional sense, but the wide forefoot keeps you upright on lateral moves. The cage on the lateral side keeps the foot contained over the footbed, and the stiffer knit holds true on push-offs and plants. Sometimes, all that’s needed is good design. 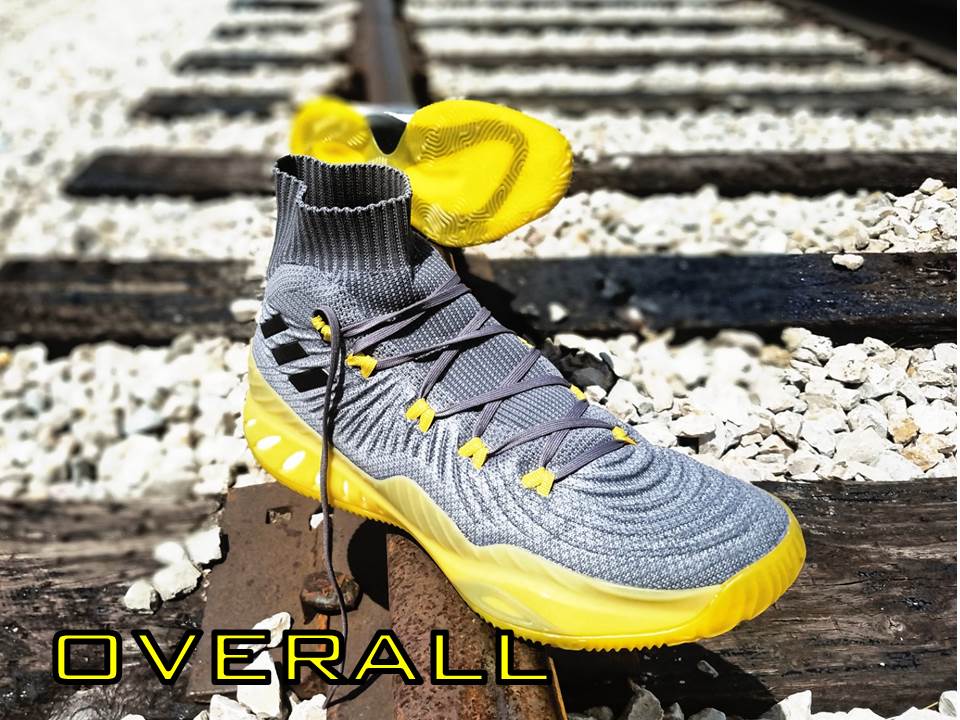 The Crazy Explosive 2017 PK flaunts improvement on almost every level — but isn’t that the point? Brands should take what works, tweak and twist the knobs, and bring the beat back better than before, not start over from scratch every year. It’s good to be innovative and creative, but if a design or technology works, why run away from it?

Improved fit and killer cushioning should put the Crazy Explosive 2017 PK on everyone’s radar this year if you play basketball. Grab this shoe if you need traction for indoor courts, #Boostislife cushioning, a locked-in fit, and quick support. This is a true “every man” shoe because players at any level, skill, age, or position will be able to enjoy it. If you need a long-term, durable outdoor shoe, the Explosive may not be in your shot range, but otherwise, this is a shoe that does everything and does it well. 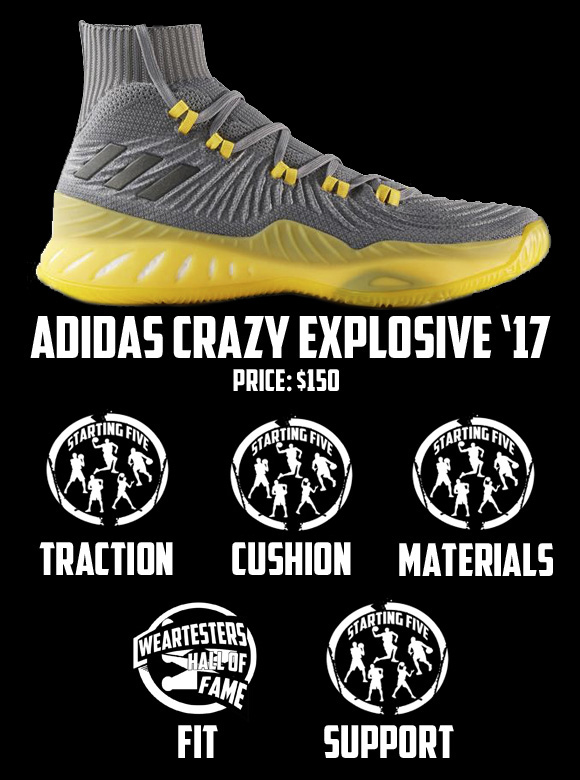