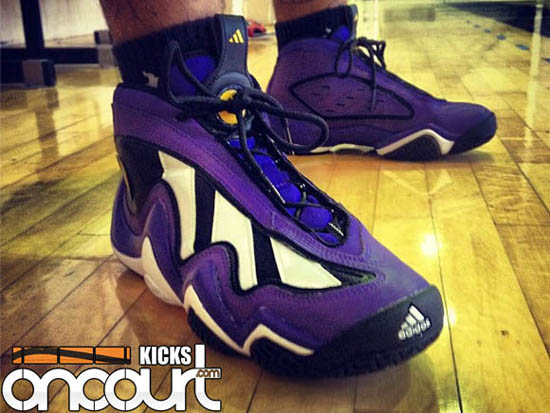 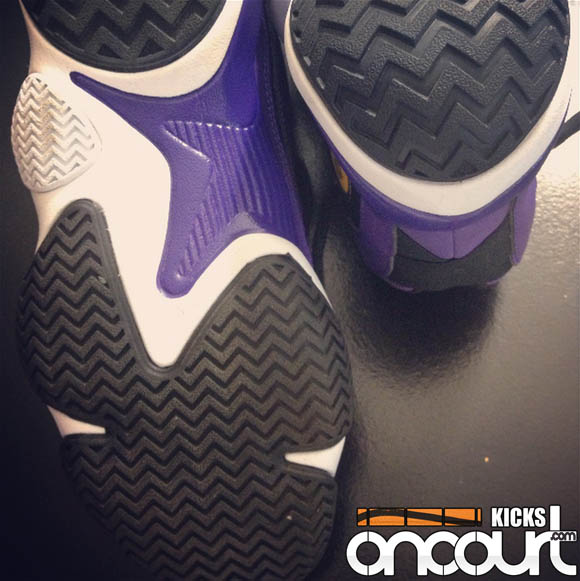 Traction – Big, beefed up herringbone is featured along the entire outsole and it works beautifully. You won’t get much squeak out of the pattern due to its thickness but you will get your moneys worth as they performed perfectly inside and outside as they were designed to last. If you are worried about buying a shoe and the soles not lasting too long outdoors then these are perfect for you. Additionally, the pattern is fairly aggressive as its featured everywhere on the shoe… no matter where your foot strikes, you’ll be covered. 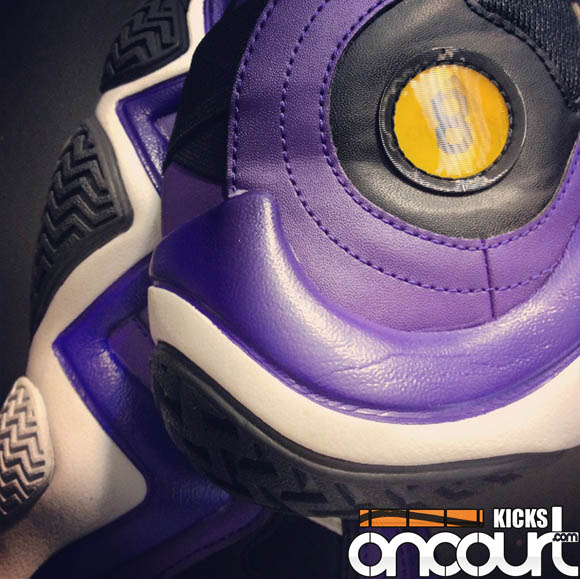 Cushion – The cushion is minimal. You sit pretty low to the ground – not Crazyquick low but low enough for great court feel – so cushion isn’t anything crazy. Feels pretty much on par with the Crazy 8’s. Not uncomfortable or painful so do not misinterpret minimal cushion as being a bad thing. There is something for everyone when it comes to performance products; some like a ton of cushion, some like low profile cushion and others prefer to feel the ground beneath their feet with minimal cushion. Is there a benefit to having a minimal setup? Yes… your reaction speed is increased. Is it increased enough to make you faster than the next guy? Probably not but your movements are covered perfectly and whatever it is you’d like to do… you can do it with ease whereas a shoe with a lot of cushion will take more effort to perform the same move. The move can still be done either way… its just a little easier without so much extra baggage. 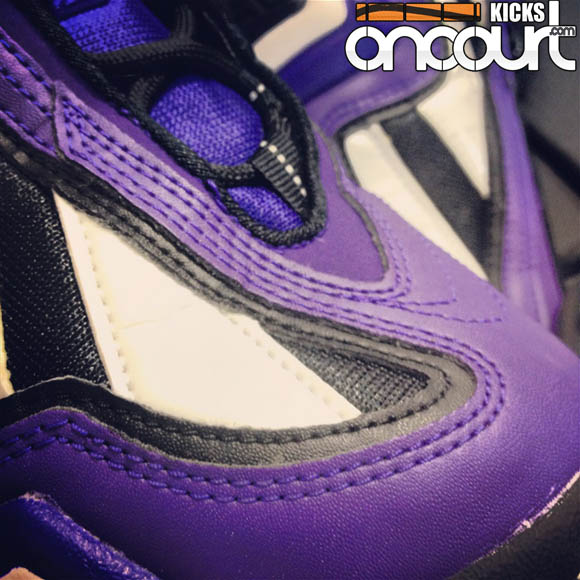 Material – Synthetic leather is featured along most of the upper with a couple of small nylon side panels. If you like leather based performance shoe then this is right up your alley. If you prefer plastic based performance shoes then you may not enjoy these as much but they are still playable. What is the drawback when directly comparing synthetic & genuine leathers to plastics? Fit mostly… synthetic and genuine leather will break-in and stretch a little while plastics tend to hold their shape better over time. Wide footers would probably enjoy a synthetic or genuine leather more than a plastic since one will break-in and mold to their foot shape while the other will not. Depending on what you prefer is how you’d go about making your decision… I personally can go either way. 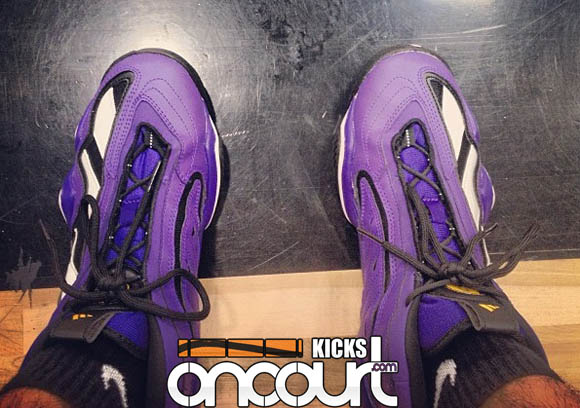 Fit – These fit true to size but after they’ve been broken in they lose a little bit of the snug fit they start out with. As mentioned above, this is great for wide footers and this is also a small drawback for those of us that prefer a really tight fit. Simply readjusting your laces is all that is really needed… I tried placing an extra insole within the shoe to take up the extra dead space… this worked quite well and made the overall fit better but there was some chafing within the shoe at the tongue’s midfoot band which caused a nasty blister so if you wanted a VERY tight fit then I’d go down ½ size or just go true to size to play it safe.

Lockdown was good everywhere except the heel. The two elastic bands are wonderful for comfort but they aren’t tight enough to secure the heel 100%. They way the shoe plays overall makes this a very small issue (I’ll go over that a bit more in the support section) but its something that you can feel a little while running around. 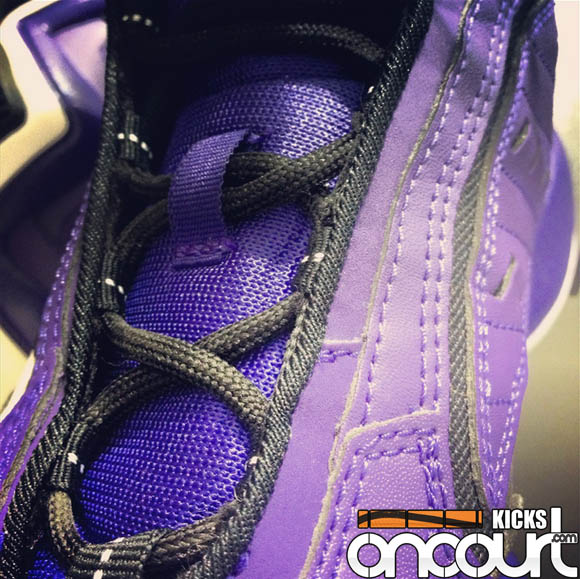 Ventilation – There are nylon panels on the medial and lateral side along with the tongue but you aren’t getting a ton of air flow. Its what you’d expect from a shoe made in ‘97. 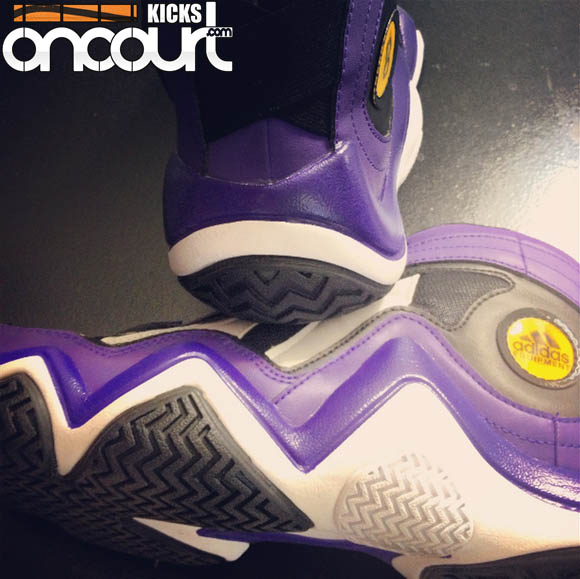 Support – The support was great. With the Feet you Wear in place, you get a wide and stable base to work with along with giant sidewalls cuping your foot in nearly every section of the shoe including the heel. This is why the heel issue wasn’t too bad… you are still very much “in” the shoe even though you can feel a little movement back there. 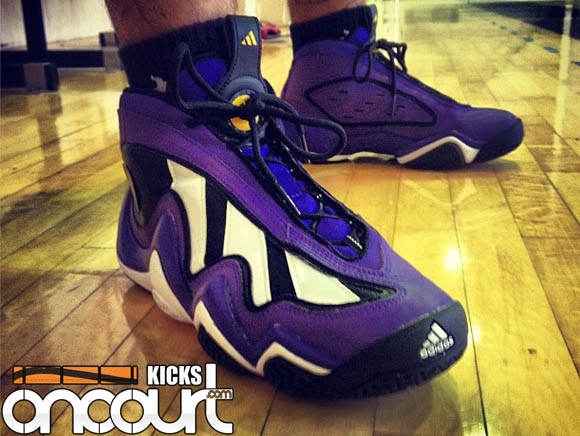 Overall – Besides my little mistake of placing an extra insole inside the shoe which caused me to have a gnarly blister… these were on par with some of adidas’ best on-court options from the 90’s. I still say that the Crazy 8 is their best model in terms of Retro performance but the Crazy 97 isn’t too far behind. I played great in the shoe and they were a lot of fun as well. Not under the leg windmill dunk type of fun… but I did my thing.

Would I recommend the shoe? I would… you’d need to know what you want in a shoe but if these offer up everything in your performance profile then I’d give them a shoe. They will last outdoors better than any current market sneaker – this included most shoes featuring XDR – so if you need something to take with you to the blacktop then give them a try… you won’t be disappointed. They still have sizes available in this colorway at PackerShoes.com if you are interested. 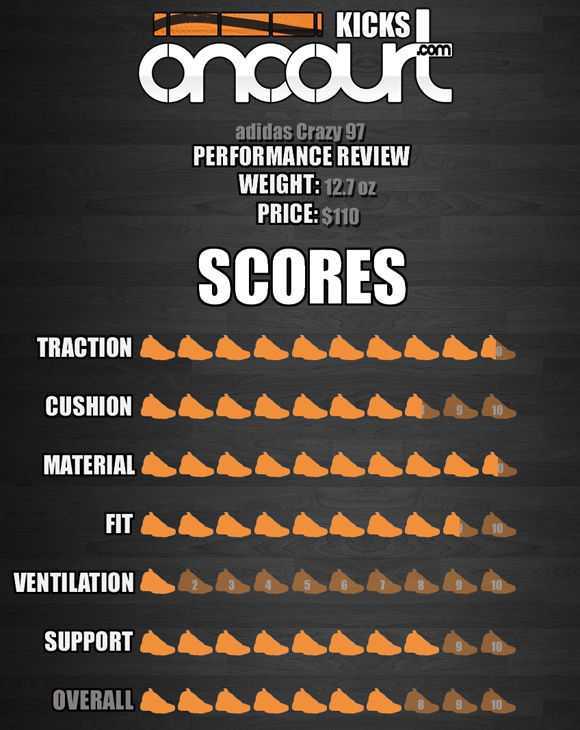