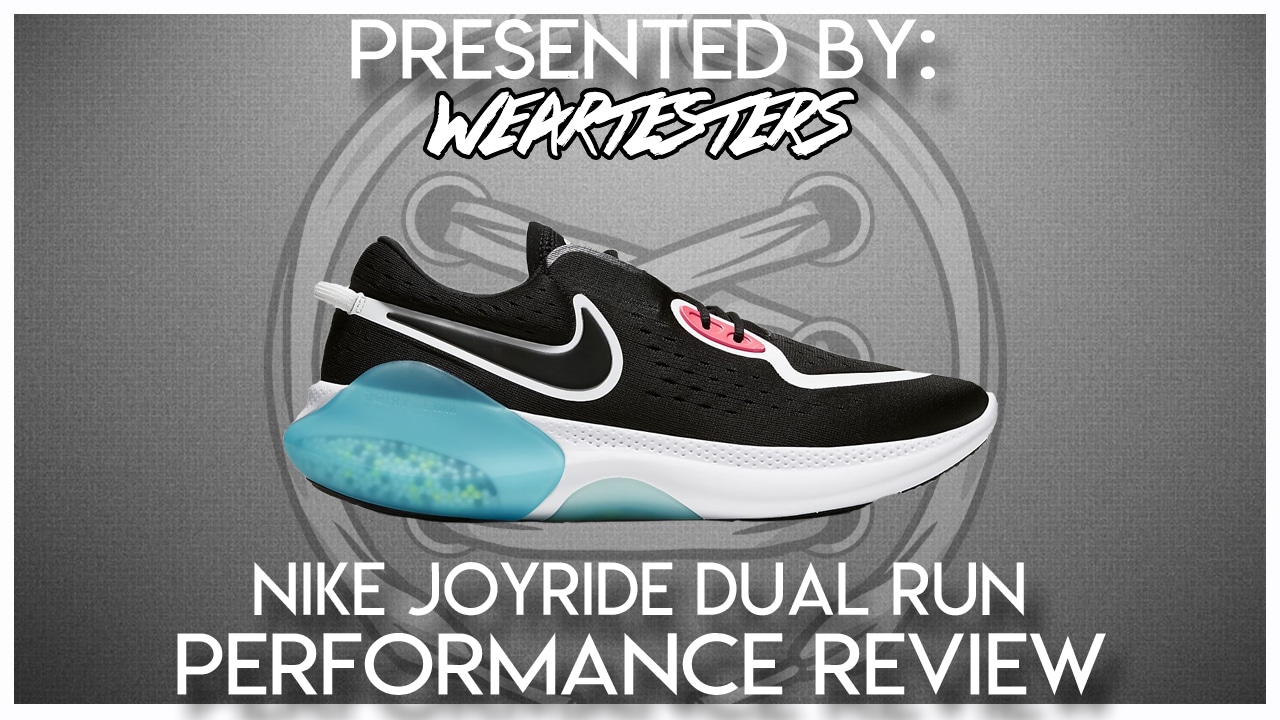 The Nike Joyride Dual Run is an evolution in the Joyride line of running shoes. The original Nike Joyride Run Flyknit (click to read our review) was Nike’s first use of Joyride and aimed at weekend warriors running short distances. It was fun to wear but not great for more than 3-4 miles of running.

The Joyride Dual Run is both more affordable and aimed at allowing serious runners to get in on the Joyride experience.

The Joyride Dual Run downsizes the number of compartments filled with beads from four to two. Nike removed the two forefoot compartments to make the forefoot more stable and remove the “beads sliding out from beneath your foot” problem. This makes a big difference in speed workouts. You no longer lose energy pushing the beads and instead have really good ground feel.

The same super comfy, yet unnamed, foam from the Joyride Run Flyknit returns to be the midsole in the Joyride Dual Run. The midsole only offers 19mm of foam between your forefoot and the ground but you still end up with a plush forefoot ride.

There also appears to be less beads in both the heel and midfoot compartments. The original tech featured mounds of beads pushing up into your foot. The Joyride Dual Run’s beads don’t do that. It also feels as if the insole layer between your foot and the beads includes a thin layer of padding so you don’t feel any individual beads beneath your foot.

While I don’t 100% love Joyride for running, it’s still fun, and the Joyride Dual Run improves the overall formula.

The rear Joyride compartment’s casing extends almost to the ankle on the lateral side of the heel. That little bit of extra rubber, a normal sized heel counter, and your foot sitting slightly inside the midsole throughout the entire shoe keep your foot on the footbed. Nike also gives the midsole a nice wide base. While it’s not an ultra supportive shoe, Nike does a good job of making you feel as secure as you can given you’re standing on a bunch of beads.

The Nike Joyride Dual Run’s materials are standard mesh with fuse overlays. The fuse overlay in the toe is mostly a design element that wraps around and reinforces the bottom two lace loops on the lateral side. The fuse below the Swoosh logo also wraps around and reinforces both the heel and the bottom two lace lops on the medial side.

We’ve seen these materials on running shoes for years and years. Though they’re nothing special, they get the job done. It’s just kind of strange seeing pedestrian materials paired with space age Joyride tech.

While the Joyride Dual Run fits true to size (order your typical Nike size), the overall Fit of the shoe is just ok. The tongue is a stretchy half bootie that’s too short. Because of that, you’ve got to hold it a certain way to make sure it doesn’t fold up as you slip your foot inside. It was annoying every time I put on the shoe. The heel tab does help but it’s too little to overcome the tongue’s issues.

Along with the tongue, the lacing system is not very good. It has two plastic (and fuse reinforced) holes at the bottom but the top three lace loops are hidden. You lace through a layer of nylon that hides behind mesh or fuse. This makes them difficult to lace. And to make matters worse, the laces are super thin and super short. I finally stopped messing with the laces and left them tied. This made it harder to get into the shoe but it was better than messing with the laces each day.

The rest of the shoe’s mesh and it’s padded ankle collar are fairly normal for a runner. If Nike hadn’t gotten cutesy with the tongue or laces the Fit would have been solid all around.

The Nike Joyride Dual Run is an incremental improvement in the run-ability of the Joyride line. If the tongue and laces don’t bother you, it’s an inexpensive way to experience Joyride.

And despite the Joyride Dual Run’s issues, Nike is moving in the right direction. I’m optimistic 2020 will bring us a Joyride model that works for serious running while also fitting great. Keep your fingers crossed.

Thanks to Nike for sending us a pair to test. Nike was not given any editorial control of the review. This review is based on our weartesters’ experiences using the shoes for speed workouts, trail runs, treadmill training, long runs, casual wear, and more.