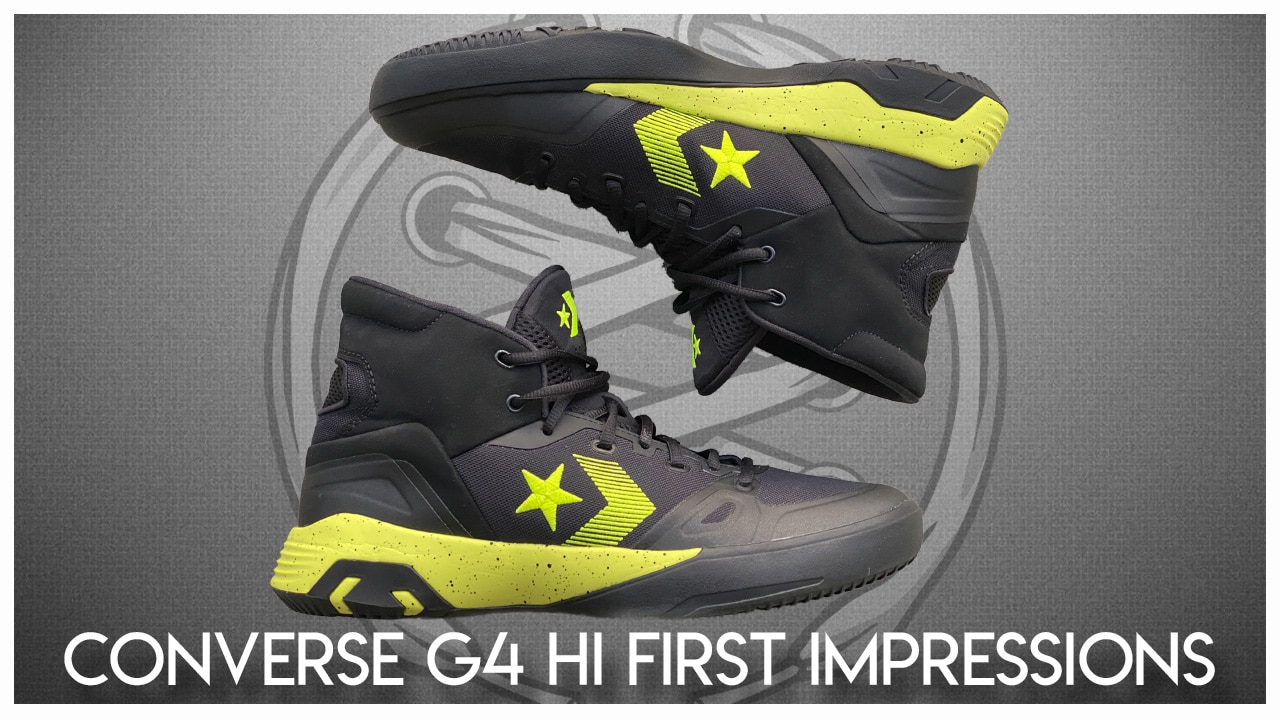 Since Draymond Green’s debut of the Converse G4 in low top form, along with Converse’s announcement of the shoe (and the initial leaks of the sneaker), we’ve seen quite a bit of interest in these performance basketball sneakers. While Converse did provide some details, there are still questions yet to be answered. We’re here to address them with an initial look at the Converse G4 Hi.

Heavily influenced by the Converse ERX-260, you will see elements of that sneaker in the Converse G4 outsole, including the forefoot’s fanned out sections of traction, the pivot point, and an inverted blade pattern that sweeps from midfoot to heel.

The pattern may seem flat at first, but the tread itself is thick with varying layers of depth and space between the grooves. For that, traction seems like it will be capable of handling both indoor and outdoor play. We’ll be putting the shoe through its paces before confirming.

When it was announced that two of Nike’s leading cushion technologies would be utilized in the forefoot and heel of the Converse G4, both excitement and further questions were raised. To answer specifics of the tech, the Converse G4 includes a standard oval-shaped forefoot Zoom air unit (think PG3 or Air Jordan 13) and a large volume puck of React foam in the heel. Both are housed within an unnamed foam that is both plush and allows for a good deal of compression.

Overall, this makes for a comfortable setup on initial wear as both the Zoom Air and React are right underfoot. Both are visible through the Strobel upon removal of the insole and the Zoom unit protrudes through a bit in all its top-loaded goodness.

A basic textile covers most of the upper, while fuse overlays around the heel, toe, and eyelets provide support and protection in high wear areas. The overlay design takes further inspiration from the ERX-260 as does the mesh window at the Achilles area, which is surrounded by a synthetic nubuck ankle collar on the high cut version of the G4. So far, everything checks out material-wise on the Converse G4.

There’s nothing premium, but performance-wise this should do the job, barring any unforeseen issues.

I was only able to grab a pair of the Converse G4 a half-size down from my normal size and honestly, I couldn’t be happier with the outcome. Everything feels perfect in both length and width (normal width foot) and lockdown feels on point as well. Currently, I have no incentive to try these on in my true size as they fit so well at a half-size down.

The Converse G4 is an overall average weight shoe with standard support features. Though the fuse and rubber encasing the midsole up front appears very boot-like (especially in this colorway), at worst it just feels stable in that area, in my opinion.

I think the Converse G4 has the potential to be a pair of “bad boys” and I can’t wait to test them and confirm whether that is the case or not.