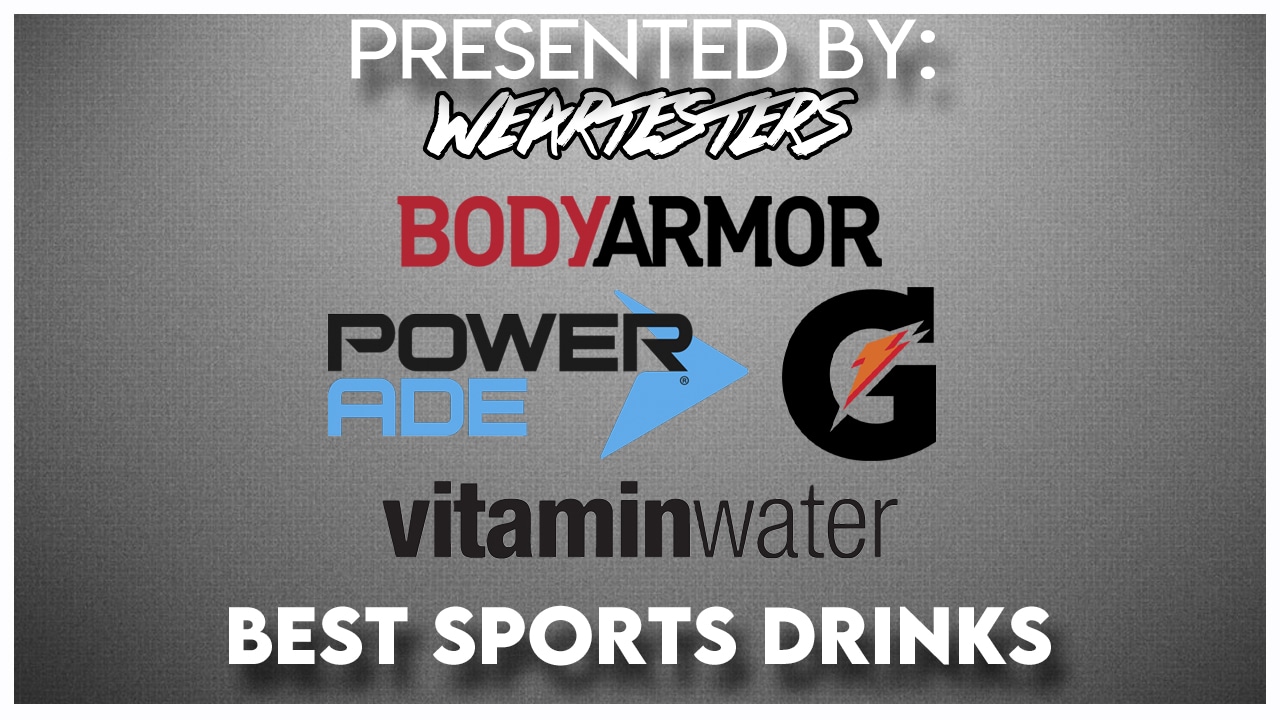 While testing shoes and sporting goods, one thing every member of our WearTesters team has learned is good hydration. Lack of hydration cuts testing time short and delays our reviews. That’s not great when your job is writing reviews as close as possible to a shoe’s release date. Because of that, we’ve tried all types of sports drinks and electrolyte drinks. And since we try so many of them during our various workouts, we wanted to give you a guide to what we believe are the Best Sports Drinks for most people.

To figure out the Best Sports Drinks we didn’t do any blind test tastes or in depth scientific studies. We’re not taste testers nor scientists so that didn’t make sense. Our methodology was trying a bunch of different sports drinks and sports waters while we played basketball, ran long distances, and hit the gym. The focus was on what tasted good, sat well in the stomach, and didn’t pack on the calories for all of us that can’t make working out our job.

The best sports drink for most people is Bodyarmor. Bodyarmor offers multiple great tasting flavors, uses potassium as the key electrolyte, uses no artificial sweeteners or artificial colors/dyes, and keeps the calories, carbs, and sodium reasonable.

Our favorite flavor of Bodyarmor is Tropical Punch. The Fruit Punch, Orange Mango, and Pineapple Coconut flavors are also really good. That many good flavors gives you plenty of variety for stocking up when your local grocery store has a big sale.

All Bodyarmor flavors are made with 10% coconut water. Bodyarmor is vegan, gluten-free, soy free, and certified Kosher. The only negative with Bodyarmor is you get 4 ounces less (16 fl oz) in the regular size than you do with Gatorade, Powerade, or Vitaminwater (20 fl oz).

The best light sports drink for most people is Bodyarmor Lyte. We chose it for all the same reasons we chose Bodyarmor as the Best Sports Drink (taste, potassium, no artificial sweeteners or artificial colors/dyes, low sodium) plus some light sports drink specific reasons. Those reasons are the overall calorie count (20 calories per 16 fl oz bottle), no added sugars, and the use of stevia leaf extract as a natural sweetener.

Our favorite flavor of Bodyarmor Lyte is Peach Mango. Other good flavors include Orange Clementine, Berry Punch, and Tropical Coconut. There’s also a Coconut flavor for those that love the taste of coconut water.

All Bodyarmor Lyte is also made with 10% coconut water and is vegan, gluten-free, soy free, and certified Kosher just like regular Bodyarmor. You still have the negative of getting 4 ounces less in the typical size than you do with Gatorade, Powerade, or VitaminWater.

Honestly, this is a hard one. It’s impossible to tell if the extra electrolytes packed into the various sports waters actually help us more than drinking normal water. We do enjoy how some of them come packaged in sports bottles, but that has nothing to do with whether they actually work.

In terms of which tastes the most refreshing, it’s a tie between Glauceau’s Smartwater and Bodyarmor’s SportWater. It may be the placebo effect, but both seem to hit the spot a little more than normal bottled waters like Dasani, Aquafina, or the stuff you’d get at a local grocery store.

Again, this is a category that’s extremely hard to judge. Will normal water work just as well? Probably. But if you want to get fancy…these sport waters are good options.

The best caffeinated sports drink for most people is Vitaminwater Energy. It’s got a Tropical Citrus taste, no sodium, and a low calorie count. Vitaminwater typically tastes watered down but the Energy Tropical Citrus flavor is the best of the bunch. The amount of caffeine is 50mg per 20 ounce bottle. That’s 5mg more than a 12 oz can of Coke.

Another viable way to get some caffeine in before a workout is to use a natural pre-workout powder. They’re not for everyone but they’re a more efficient way to get the caffeine/energy without the extra calories.

You know we couldn’t do an article about sports drinks without mentioning the best sports drink endorser ever, the GOAT himself, Michael Jordan. Michael Jordan’s endorsement of Gatorade is what kicked off the sports drink craze of the late 80s and early 90s. It was Jordan who turned Gatorade into the behemoth-sized brand it is today.

Because of that, an honorable mention goes to Jordan’s favorite flavor of Gatorade, Citrus Cooler. You can argue whether it’s the best flavor of Gatorade ever made (Fruit Punch holds the title for many), but it is the most iconic. Thanks to MJ, every kid that played basketball in the early 1990s knew about Citrus Cooler. Bringing one with you to the local court was almost on the same level as rocking the latest Jordans. It was that culturally relevant.

Citrus Cooler also has a weird history with Gatorade removing it from most shelves for years because (supposedly) it wasn’t selling that well. It recently returned to grocery store shelves and the nostalgia factor is clearly there for all the 90s kids. Citrus Cooler can get cleaned out (alongside Fruit Punch) when grocery stores have those great 10 for $10 sales.

And that’s why we had to mention Gatorade Citrus Cooler. Without it, and Michael Jordan’s key endorsement, we may not have all the sports drink options we have today.

This is a list of other brands we tried and a quick summary of why each of these sports drink competitors fell short.

Vitaminwater. It’s watered down taste is what hurts it the most. Though it has the lowest calories of all the sports drinks and no sodium, Vitaminwater doesn’t have enough good tasting flavors and uses artificial sweeteners/dyes.

Powerade. Coke’s answer to Gatorade is a staple of fountain drink stations at many gas stations and restaurants. But Powerade only has a couple good flavors. High fructose corn syrup is it’s second ingredient behind water. Powerade’s nutritional stats are similar to Gatorade and it’s most readily available 28 ounce size is just too big and sugary.

Note: If you represent another competitor that wants to be considered for our list, please get in touch. Our Best Sports Drink article is updated on a regular basis to reflect new competition, flavors, and nutritional information.

Like what you’ve read? Support us by joining the WearTesters community.