Almost one year ago, Under Armour unleashed HOVR cushioning on the world and for a company that was desperately in need of a top-flight signature cushioning system HOVR was magical. It only took nine months to get HOVR in basketball, and here it is: the HOVR Havoc Low. Does the Havoc live up to the promise of the Phantom and Sonic runners? Let’s go…

The HOVR Havoc Low is available now at Eastbay.com

One thing you can (almost) never say about Under Armour basketball shoes is that the traction sucks. The HOVR Havoc Low is no different.

There’s herringbone from heel to toe, at least where the shoe touches the court, with horizontal lines breaking up the pattern for flexibility in the forefoot. This is basically the same pattern as what the Drive 4 used and it works on any surface, even outdoors.

Dust is no issue because the grooves are wide and deep and push away any debris you may pick up. It isn’t the squeakiest, but we know that means nothing — you are stopping when you want. Don’t worry about the missing areas because if you need traction in those areas you are already lost.

It says HOVR, but it ain’t the same. First of all, part of the magic of the HOVR system is it can be tuned differently for specific uses. The HOVR Phantom is soft, really soft, and is a more cushioned, relaxed ride for long running days or when you need a little more protection. The HOVR Sonic was tuned tighter and stiffer for fast, racing-style training and runs. The HOVR Havoc is more to the Sonic, but even tighter.

Honestly, there isn’t much HOVR feel at all — no cushy step-in, no bounce-back response. The reason? The HOVR is supremely caged by both a stiff foam midsole on the perimeter and underneath by an almost-full-length TPU shank plate. Honestly, this is good; I couldn’t imagine trying to play ball in a shoe as cushioned but unstable (for lateral movements) as the Phantom.

It’s not all bad though: there is a quickness to the midsole that only comes from a lack of compression. Your steps happen quickly, and your movements are not slowed down waiting for the midsole to respond. The HOVR is thin and doesn’t beef up the midsole at all so court feel is fantastic.

And if you absolutely, positively need to feel some sort of bounce give it time. Once that foam midsole starts breaking in a little, you will notice a more HOVR-y feel. Best of all, while you are playing, impact protection is no issue — which is especially surprising given the thin midsole. You may not be able to feel the bounce, but when you are done playing in the HOVR Havoc Low you won’t feel the pain either.

Mesh and fuse. Fuse and mesh. We’ve all heard the story before, so what else is new? Well, really, nothing — but it’s all about the usage of the fuse and mesh, and the HOVR Havoc Low uses the materials well.

With a full-mesh one-piece upper, fuse overlaid on the toebox and lateral forefoot, and backing by a super-comfortable foam liner, the HOVR Havoc Low is a supremely comfy sneaker. While fuse does sometimes make a shoe stiff and inflexible, the toebox of the Havoc breaks in within minutes of wearing and flexes like a second, rubbery skin.

Soft padding is found along the heel, helping lock in and cut down on the heel slip, but honestly, that needed to be more like a memory foam or at least a little denser. The only other thing to mention is the TPU heel counter, and that is what it is. Simple, but effective.

Through the forefoot and midfoot, fit is really, really close to 1:1. Like, really close. There is a little bit of dead space over the top that you don’t find until you pull the laces up and the one-piece upper pulls in a little, but around the toebox and midfoot you are completely blanketed. I almost went up half a size but I wanted to see how well the shoe felt after a couple of wearings and the HOVR Havoc Low didn’t disappoint; it broke in perfectly and began flexing and moving right with me.

The forefoot laces run through the fuse/synthetic side panels and do a serious job of pulling the upper around your foot as well as pulling your foot down into the midsole. So many shoes just want no extra room instead of actually making the shoe a piece of the athlete, but not the HOVR Havoc Low.

The lacing system does sit back and high on the ankle area, which helps lock the heel into the heel counter, and it does a good job. However, for my desired level of cinch-down, I did get some lace pressure along the top set of laces. Nothing to cry about, but I did have to loosen them up every now and then to keep from chafing and blistering. When I did loosen up, there was a sensation of heel slip, but not real slip. What I’m saying is this: when the heel doesn’t feel locked in I couldn’t feel anything around my heel at all, but I didn’t have any serious slipping.

This is where the denser foam in the heel area would have helped. If the foam was a little stronger, the heel would feel secure. It isn’t a safety issue, but if you need that Aunt Mabel hug around your foot to feel safe and warm, you may want to look at the high version.

This HOVR Havoc is a low-lowtop, possibly the lowest I’ve worn since the Kobe 8, and it feels like it. That isn’t to say the shoe isn’t supportive or safe, because, as you loyal WearTesters readers and watchers know, it ain’t the height of the collar that helps. The HOVR Havoc Low has a super-wide fat-booty heel that rides flat on the floor. All those heel-strikers and big-man post moves are stable and supported perfectly — especially with the HOVR foam not being mushy.

The forefoot is more of the same, wide and balanced with a stable midsole. The foot doesn’t sit inside the midsole — no raised areas on either side — but the synthetic lace system works the same and keeps the foot snug over the footbed on lateral movements.

The midfoot is solid thanks to the huge TPU plate under the HOVR and above the outsole rubber. The plate runs completely across and from heel to nearly the toes so there is no twisting or turning underfoot while playing. This should make the HOVR Havoc Low stiff but the shoe just flows.

When I first tried on HOVR in November of 2017 I was immediately hit with the thought, “I wonder when this will hit basketball?” Since I was with Under Armour reps at the time, I was told not until August. Since that day, I have been anticipating this shoe like no other. HOVR in running is magical. In basketball, well, it needs a little tuning, but the concept and vision is there. No, it isn’t bouncy like Boost, or responsive like Zoom, but it does absorb and rebound on impact and is stable on any and all movements.

If you need that cushy cushioning you will have to drop some dollars on another brand. If you are looking for a seriously quick, responsive, biting-traction shoe, the HOVR Havoc Low will more than satisfy. Coming in an abundance of team colorways (can’t wait for all the Dallas Mavericks/Dennis Smith Jr. colors to pop), the HOVR Havoc Low is a shoe that works and works well in any environment. Now, let’s make sure HOVR doesn’t end up being Micro G’s new neighbor in Florida (#retired). 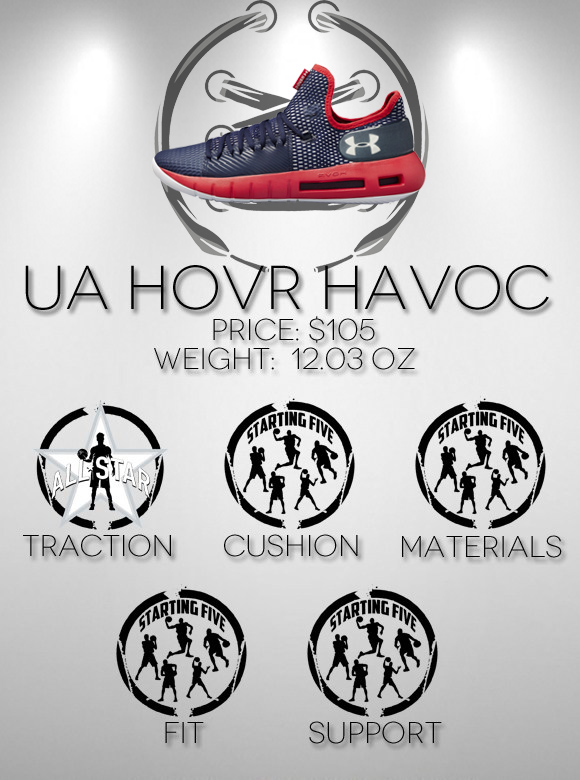