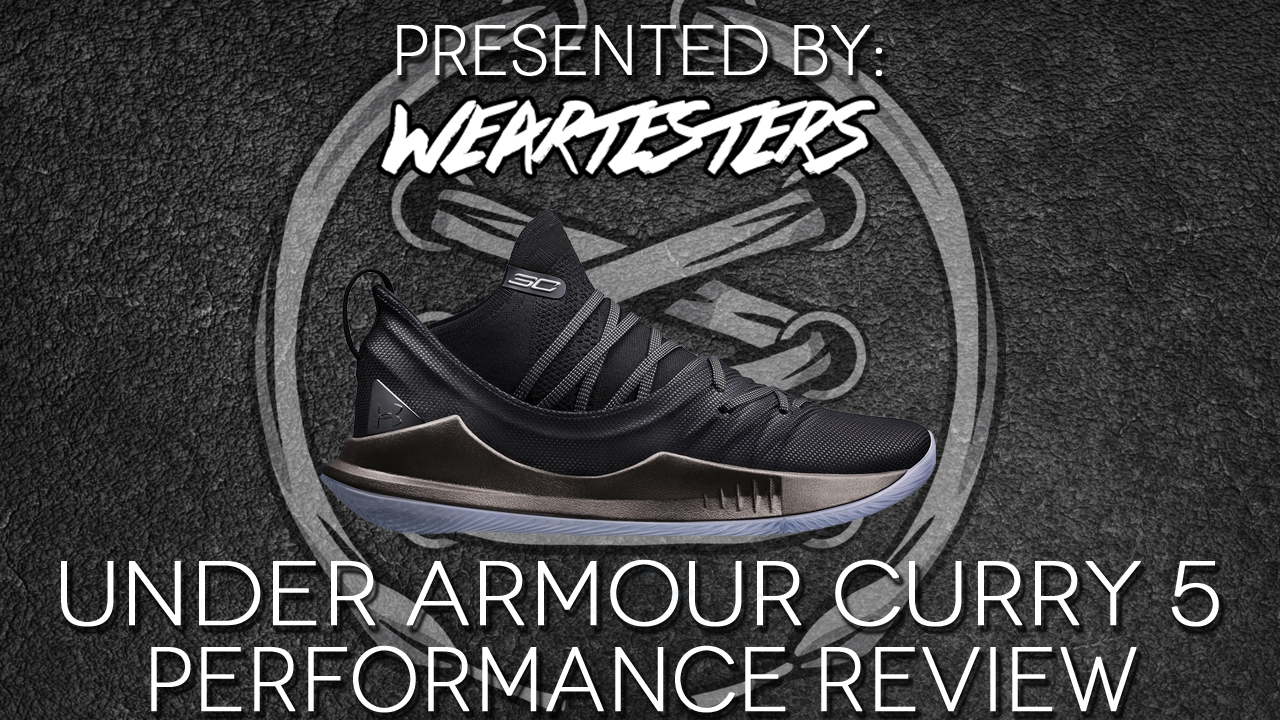 Reviewing shoes is a strange thing, and if you read Nightwing’s review of the Under Armour Curry 5 yesterday, you probably know where this is going.

If you stopped and counted how many basketball shoes are released each year, by all performance brands, it has to be near or over 100. Out of all of those, we review 35-45, maybe more. Not all of those can be good, but we try to review them all — the good, the bad, and the ugly. And while we do try and find the good points of every shoe, sometimes it means we are putting lipstick on a pig. No matter how you try to make it pretty, it’s still swine.

I have been doing this for almost 10 years, and some bad shoes that come to mind are the Hops (credit if you were around for that one), Nike Kobe 7, Under Armour Micro G Charge BB, Air Jordan Super.Fly 5 PO, an adidas team shoe (pre-Boost), the Peak DH3, and various runners and trainers.

Sometimes we get slammed for bias when we don’t like or enjoy a shoe, but for the most part you, our readers and watchers, know us and understand where we are coming from. Like Chris (Nightwing) said, it gets to a point where some shoes are just not fun, or actually feel dangerous, and we just want to have fun playing basketball.

We all here at WearTesters have had shoes that feel like work when reviewing and those shoes generally get bad scores. We are like you guys — we just want to play basketball and have fun while wearing some sick kicks doing it. Our only mission is to help you all decide which kicks to drop your dough on, and which not to.

While the pattern looks interesting, and it should work, it just doesn’t — at least on the courts I played on. I tried out three different 24 Hour Fitness courts that range from decently swept to down-right nasty, and afterwards the floors were all clean. Why? The Curry 5 picked up every bit of dust and took it home. Even the black rubber grabbed and held on worse than the translucent did.

Wiping was necessary on almost every dead ball or stoppage and most times even more, as I found myself sliding after a couple of trips up and down the floor. Trying to stay in front of an opponent on defense and trying to V-cut backdoor was very difficult as the shoe just didn’t feel like it wanted to keep up. Even when wiped clean there was little in the way of stopping power, and when it did stop the upper didn’t feel like how my foot was held, but more on that shortly.

Outdoors? You may be okay for a while because the rubber does seem a little harder than most translucent rubber out there, and the pattern is a little deeper.

Cushioning was the same as the Curry 4: a proprietary foam that feels like dense EVA, so no real feel of impact protection or energy feedback. However, for the short time I wore these I never felt any excessive drain or pain in my joints.

The Curry 5 does feel a little softer, especially on initial step in, due to the blue OrthoLite sockliner and the fact that the heel foam is a little softer, but not much. Again, it rides super low, is stable on takeoffs and landings, and although it doesn’t have the compression and return of other foams (HOVR!), it never caused any pain. That was later.

The return of Anafoam! Yeah, that’s what surrounds the forefoot and the heel cage, and it feels great in hand. Anafoam’s main property is forming to the foot as the material heats up so it can flex with you. It’s also more durable than a full-on knit while providing a lot of the same feel — perfect for flexible support on a shoe that needs to be fast and light.

The inner sock is knit and elastic, making the Curry 5 comfortable on-foot and providing needed ventilation outside of the Anafoam. The inner sleeve is really a compression sock that forms up and fits right on the foot. Not much else to talk about except the TPU midfoot shank that raises the arch completely away from the floor and holds tight.

Well, here it goes. Out of the box, on initial try-on, the fit was fantastic. Great. Stupendous. It felt good. The toes had very little space but didn’t feel cramped. The midfoot was locked in and tight. The heel, well, the heel slipped up and down and side to side, but for the try-on I wasn’t laced in game-tightness and the Anafoam was new, so that would get better after a couple of casual wears and some gym time.

It didn’t. The main issue with the fit of the Curry 5 is the lacing system. The nylon internal lace straps are fitted under the arch and over the instep into the lacing area as well as from the midsole up on the lateral side. The lace straps are unlined — they sit just outside of the thin, knitted internal bootie and it is not a good feeling.

I lace my shoes tight so I have no heel slip, if possible. Lacing the Curry 5 as tight as I needed caused the lace loops to cut directly into my arch, and while I didn’t end up with the kind of blisters NW did, the Curry 5 was still unbearable to play in.

But why did I have to lace them that tight? Because heel slip was a monster no matter how tight I laced. The Anafoam is too soft in the heel to be a proper heel counter that holds the heel in pace. It isn’t molded or fitted, and instead lets the inner sleeve provide support — that material is not durable or strong enough to hold the foot in. The Anafoam is a wider cup that is just… there.

Then we have the lacing system. The laces run over the top of the foot, like a normal shoe would, but there is no front-to-back angle. The last lace hole runs over the top of the foot so when the shoe is laced game-tight it pulls the foot down into the midsole instead of back into the heel. Laced up game-tight, I could take the shoe off without untying. That, my friends, is not a good sign.

Length-wise and overall size is definitely true, which makes the situation even more frustrating.

The midfoot is completely, almost overly, supported by the TPU shank under the arch. It is raised from the floor almost an inch and is solid and stable. The Anafoam does an extremely good job of keeping the forefoot over the footbed on lateral movements, so no issues with sliding out while playing. The midsole foam is stiff and stable and won’t compress under most weights while landing.

I would say the midfoot is locked in for support but having to lace so tight causes too much pain and loosening makes the heel slip terrible. The heel is not locked, has too much slip, and honestly felt a bit dangerous to me while playing. When the traction continually slides out and the heel is moving up and down confidence was not my first thought.

I will not be playing in the Curry 5 again. Releases slow down in the summer, and that’s when I go back and pick my favorites from the year to revisit them. Summer list minus 1. At my age and level of playing, safety has to be a priority. An injury of any severity will take some serious recovery time. The Curry 5 looks fantastic, and even though the Curry 4 had some issues, the promise of performance from that shoe made all of us anticipate the greatness of the Curry 5. That promise is gone.

I know some of you will like this shoe — someone likes every shoe. And that’s the way this works; one man’s Benched is another man’s All-Star. However, if asked, we will be honest, and honestly, I cannot recommend the Curry 5 to a player of any position or size. If you are a die-hard Steph fan, go for it.

This is not a dog-pile on Under Armour by any means. The brand just released one of the best new technologies in years with its HOVR foam, the Heat Seeker and it’s knit upper were oh-so-close to greatness, and the Curry 4 is still on shelves and still performs great.

There are some serious team shoes coming this summer with crazy designs colorways — and it should be mentioned that the design team did a good job, visually, with the Curry 5. Let’s see how the team bounces back for the Curry 6. Again, every company has some misses. Don’t let this review drive anyone away from the brand — just this shoe. 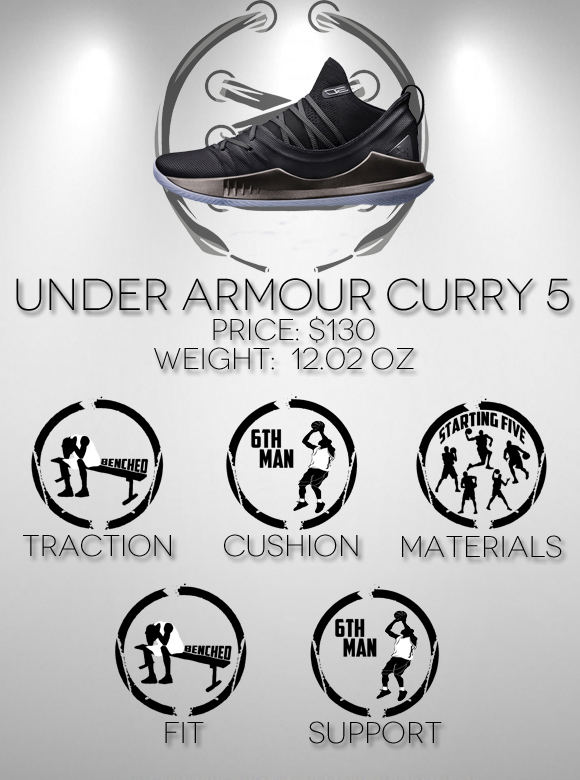