The UA HOVR Infinite is Under Armour’s latest attempt at a neutral cushioned running shoe for serious distance runners. It looks a lot different than a typical Under Armour shoe and takes its design cues from traditional cushioned distance shoes. But can UA make a shoe that competes with respected running brands like Mizuno, Saucony, and New Balance?

Under Armour was kind enough to send both Jodi and I the UA HOVR Infinite to test. We both ran a lot of miles in the Infinite including various types of workouts in a bunch of different conditions. Once we had the Infinite in hand, both of us were excited to test it. Let’s find out if our excitement was justified.

Jodi: The cushion is Under Armour’s relatively new HOVR. The idea behind it is that it provides a ‘zero gravity feel’ to maintain energy return to help eliminate impact step after step. It’s surrounded by a compression mesh called Energy Web. The mesh contains and molds the UA HOVR foam to give back the energy you put in. It’s a nice cushy ride. Not too much cushion and it doesn’t feel sloppy. If more people would give it a chance, it would hold its own with the current cushioning darlings that are Nike React and adidas Boost (blasphemy I know).

Drew: This was Jodi’s first time trying HOVR cushioning. She came in with super high expectations because Chris and I have done nothing but compliment it since it was introduced. Even with those expectations, she thought it delivered. Bottom line, HOVR impresses almost everyone that tries it. For me, the HOVR in the Infinite feels too light to protect my legs and back the way it does. I was always surprised when I finished my long runs and my legs felt so good. The HOVR absorbs impact really well but still feels firm enough that my steps always feel like they’re propelling me forward and I’m not losing any energy into the cushioning.

Jodi: The traction is made up of two types of rubber: blown and high abrasion carbon. There are plenty of deep cutouts for flexibility. Most of the shoe is covered by the really soft blown rubber. And I mean very soft. The pavement started eating away at my high wear areas within the first couple runs. The high abrasion carbon rubber is only along the edge of your heel. They used the blown rubber primarily because it helps give you that soft, cushy ride. This is something that harder rubbers just don’t provide. I wish they had used the harder rubber along the front lateral section of the shoe. Even just a strip of it would have been nice. If this shoe is your primary running shoe it will only take a couple months to burn through the traction to the EVA midsole. As far as how the traction worked on various surfaces, I ran in sun and rain, through mud and puddles, on grass, along rocky trails, and just around the neighborhood. I was always confident about the shoe sticking to the ground underneath me.

Drew: I didn’t have any issues with the traction. It worked well no matter the running conditions. I didn’t burn through the blown rubber quite as fast as Jodi but I agree it would be nice to have some carbon rubber reinforcement in the toe or forefoot areas. I know they use all the blown rubber to decrease weight. It helped prevent the Infinite from getting too heavy and added another bit of softness to the overall ride. It’s a trade off but I think it was worth it given the overall goal of the shoe.

Jodi: The support and lockdown are on point thanks to a sturdy internal heel counter and an upper that didn’t have any weak spots. The whole package kept my feet locked in place nicely.

Drew: Thanks to a thick heel cup, sitting inside the HOVR midsole (just slightly), and the wide base of the shoe, this is one of the more stable neutral cushioned shoes on the market. It’s got enough support to survive some fairly rough trails in addition to anything an urban environment can throw your way.

Jodi: The upper is an engineered mesh that’s extremely lightweight and breathable. It’s the kind of mesh I crave. Plenty of airflow for your toes, enough stretch to keep you comfortable, and, thanks to a molded toe rand, you don’t actually see my toes. That last bit might sound weird but with all of these newer shoe models going to a more sock-like look, it’s worth noting. The tongue and heel counter have plenty of padding so there was no digging or heel slippage and no lace pain on the top of my foot. Speaking of the laces, they’re the kind of oval type that are by far my favorite. You don’t have to double knot them because they don’t come untied. Another major plus with the Infinite is the many reflective details. You have them across your toes, along the bottom of the lace line, up the tongue, on top of the tongue, down your heel, and on the bottom of the shoe. I’ve been known to complain in the past about other brands skimping out on the reflective gear or just forgetting about it entirely. Under Armour must have heard me because they nailed the 3M details.

Drew: The UA HOVR Infinite is on the heftier side but the airflow is very good and delivers a light breeze across the front two thirds of the foot. The mesh they use is the sort you see often on top of the line runners and Under Armour was smart to utilize it. I tested the UA HOVR Infinite Reflect version which takes the reflective portions that Jodi mentioned and supersizes them while staying at the same $120 price point. Check my Instagram to see them in all their reflective glory. The midsole, laces, toe cap, and back third of the shoe get a reflective layer on top of the normal materials. If you run a lot at night, this is the best you can hope for in a sneaker. Your feet will be seen and lit up by all headlights or flashlights. Having also worn the regular version of the shoe, the extra 3M does not add any significant bulk or stiffness to the upper. However, the laces are different than the regular Infinite. The Reflects use a flat lace to allow for them to use half reflective thread. They’re also a bit stiffer than the normal oval laces used on the regular Infinite.

Jodi: The fit is where things get tricky. Not every shoe is made for everyone. And what I mean by that is that the UA HOVR Infinite is not meant for me. Now this might confuse all of you because I just spent the last several sections raving about the shoe. You’ve probably also seen various headlines where this shoe is the WINNER of the 2019 Runner’s World “Recommended” Award. I was baffled when I read that because the news broke as I was testing the Infinite. I ran just over 50 miles in them before deciding they make better workout or casual shoes (for me). It may be the ergonomic EVA sockliner that is contoured specifically for a woman’s foot. Something about this feature makes my feet feel like they are being rubbed raw after about 2.5 miles. The way that its molded is supposed to eliminate slippage and provide ideal underfoot comfort. I will say that upon initial try on that I loved how much space there was in the forefoot and that there was NO slippage once I started running. But maybe I need some slippage. I tried to test this theory by swapping the insoles out but I can’t say it helped. This leads me to think that the discomfort I was feeling has more to do with the Infinite’s heel to toe drop. It’s 8 mm, nothing crazy, but instead of it being a gradual slow drop, it feels like it’s more sudden. The drop starts at your arch so that when you’re running the sole pushes you up to your toes very quickly.

Drew: I really enjoy the fit of the HOVR Infinite’s for long runs. It runs true to size with plenty of room for toe splay and the HOVR cushioning is plush well into the second hour of running. I think most runners will have plenty of room in the Infinite. I didn’t have any of the problems with the sockliner or drop that Jodi did. I do think she made a good point in the Materials section. This shoe is not the type of shoe that gives you a one-to-one fit. It maintains its structure in a very traditional way. The fit is a throwback to runners of the late 90s and early 00s. The Infinite weighs a lot less than shoes of that era did but you get the same feeling when you wear them.

Jodi: I’m no expert, just a girl who loves to run. All great runs start with good feeling feet. The UA HOVR Infinite is just not a shoe I can wear with confidence for long runs. I do enjoy them for an easy 30 minute run. Like I said when we reviewed the Nike Free RN 5.0, I see my running sneakers as tools. The Infinite is another shoe that’s a very good tool.

Drew: This is a review where Jodi and I differ. I think the UA HOVR Infinite is a solid long distance shoe with great cushioning and a nostalgic fit and feel. I suspect our differences of opinion are because the shoe is made differently for men and women (which is why we do a review from both perspectives in the first place). The differences could also be because our feet are different and this was just a shoe that didn’t work for her. This highlights the importance of taking the information WearTesters provides and then making your own decision with your individual preferences in mind. There’s no reason to get stuck running in a shoe you don’t like. Unless, that is, you’re a WearTester and it’s literally part of your job 🙂 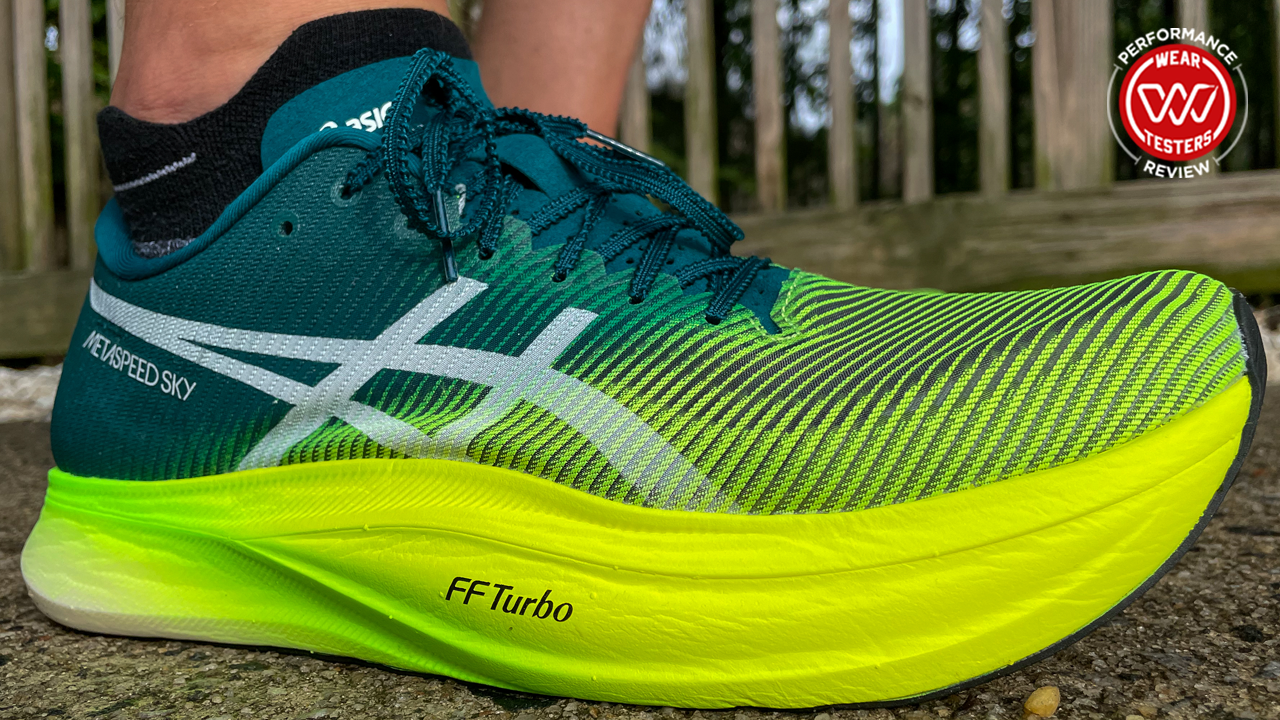