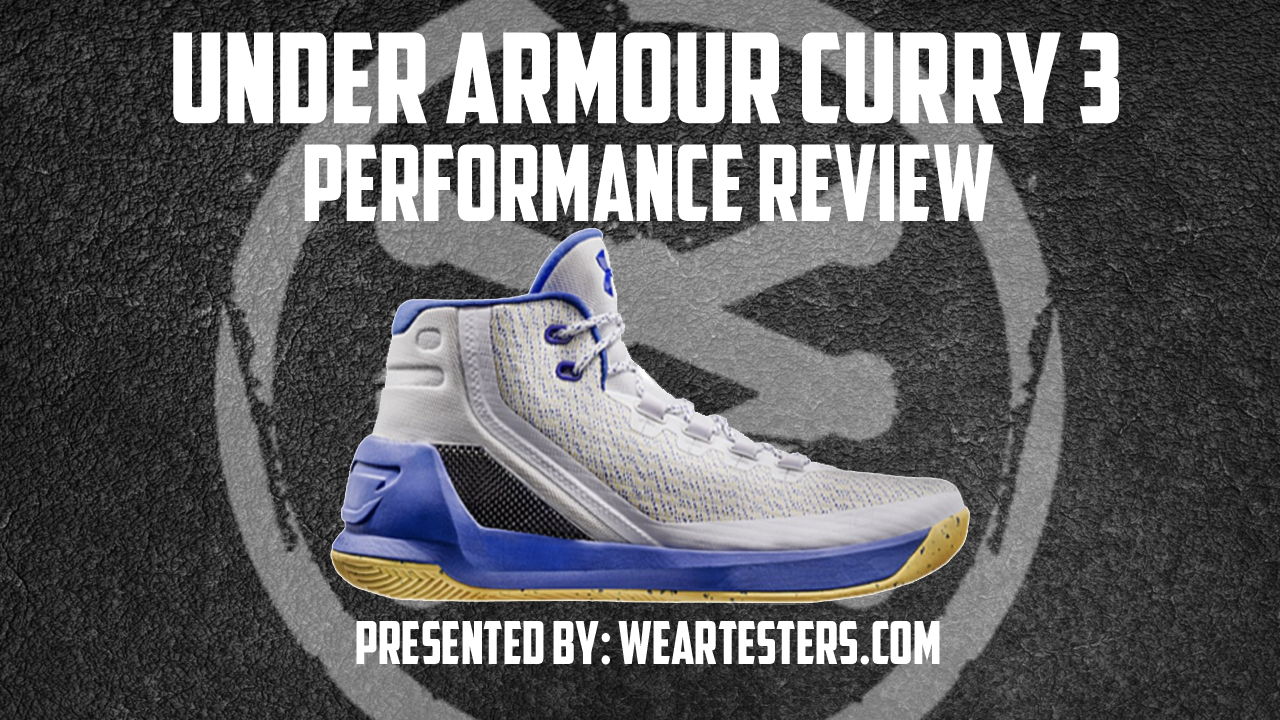 No matter who you are, or what your favorite brand is, there is no denying the runaway success of the Curry line. From a brand that didn’t even make basketball shoes eight years ago to branding the two-time reigning MVP, Under Armour is a player now. But after the killer on-court play of Steph’s second signature, does the Curry 3 match up or fall off? Well, you know… 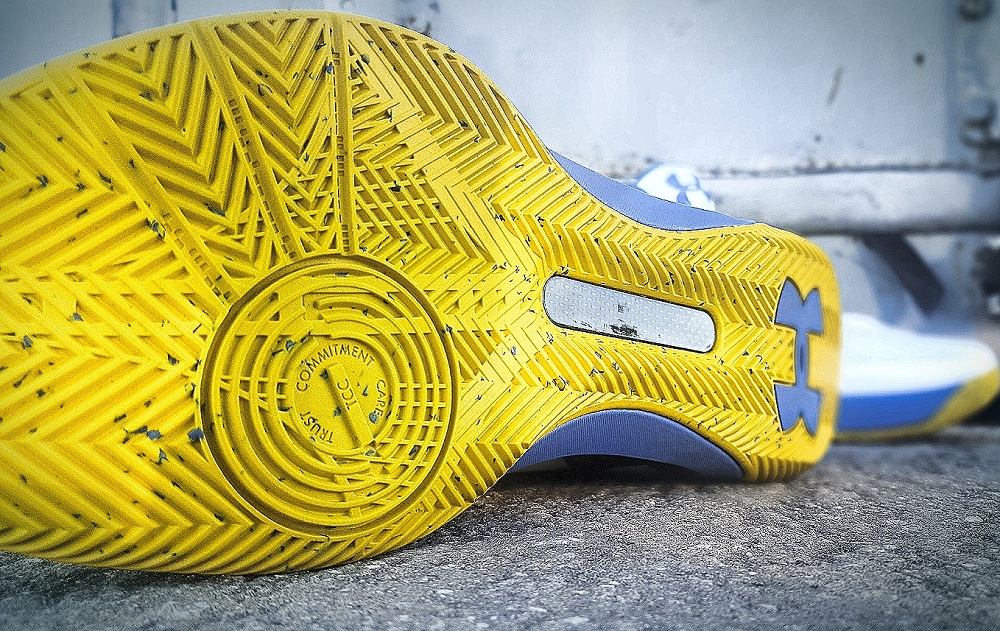 TRACTION – If a shoe doesn’t feel like it has good traction, does it? The Curry 3 outsole never failed me. I was able to drive and cut and never slipped, but the bite into the floor just wasn’t there. However, on the last two wears, comments from other players about how bad the floor was were going back and forth. The Curry 3 never failed, so traction is deceiving — no slipping or sliding but not a “dig-in” feeling either. The rubber is not exactly outdoor-friendly so durability on concrete will be less than stellar, but if you have no choice it will grip just fine. The tread pattern is shallow though, so don’t expect months of playground runs.

CUSHIONING – Charged once again makes an appearance on the Curry line, and there is a reason for this: it is what he wants! No, it isn’t as responsive and cushy as Micro G, but according to the designers of the Curry 3, Steph doesn’t want bounce or pillows; he prefers court feel anda low ride for quick crosses and releases (you might have noticed his handles) and would play in just a rubber sole if he could. The Curry 3 isn’t the same as the Curry 1 or 2. The initial step-in and feel are way improved, mostly due to a thick Ortholite sockliner. The plush comfort on top of the stiff Charged is a unique feeling, with no noticeable feedback or energy return, but there were no hard impacts felt or additional pain in the knees or ankles while playing.

One thing about a cushioning system with no real bouncy feel: planting and jumps are stable and quick, so coming off screens for catch-and-shoots feels natural and solid. Better stability means better shooting. See a pattern? 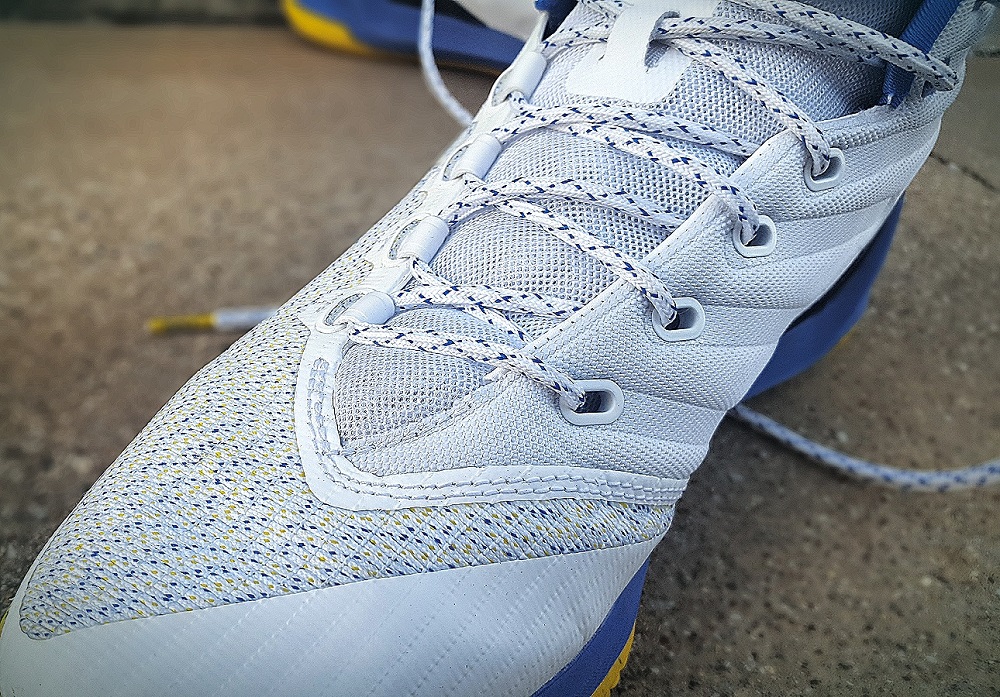 MATERIALS – New stuff alert!! This time around Under Armour has brought us Threadborne, its version of a woven upper material, and it’s nice. While not as soft and stretchy as Primeknit, but not as harsh and rough as Flyknit, Threadborne is a very comfortable fabric that is still supportive. Constructed of cross-knitted threads (vertical and horizontal), Threadborne is designed to hold in all directions but still flex with the foot. It does take a couple of wears for it to feel like a one-to-one fit — as a matter of fact, on the first wear, the fit was nowhere close to right. There was too much empty space and the Threadborne and Anafoam sections felt like two different shoes. A little heat, sweat, and motivation, and the upper conformed to the foot and “learned” where and how to flex and bend. But more on that in… 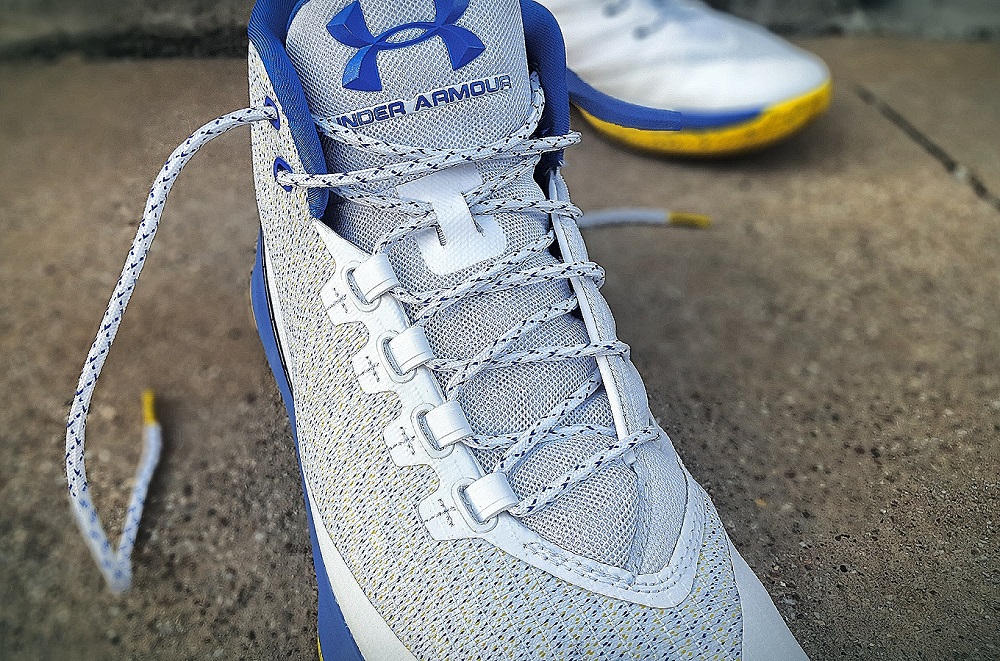 FIT – One of the biggest changes in the Curry 3 from the Curry 2 is the addition of foam in places it wasn’t, mostly at the ankle. The minimal SpeedForm upper of the 2 was great for fit and really locked the ankle in. The Curry 3, returning to Anafoam and the thick padding, still locks the ankle in but depends more on just wrapping the ankle in foam than anatomical design. The tongue is thicker as well, and still wraps around the front and sides of the ankle for a really simple design that helps so much in comfort and fit, but is really a forgotten design element.

Lockdown in the heel is super solid because of the padding and the lacing system that really pulls the foot into that huge heel counter. The midfoot lacing straps you down into the shoe, and after the first couple of games, it well works with the Threadborne and Anafoam to secure the foot. Length-wise, if you want a super-snug fit, go down a half size and you will be great. If you like about a thumb-width in the toebox length, stay true. Wide-footers, true to size should work okay, but Shrek-feet may want to roll on past. 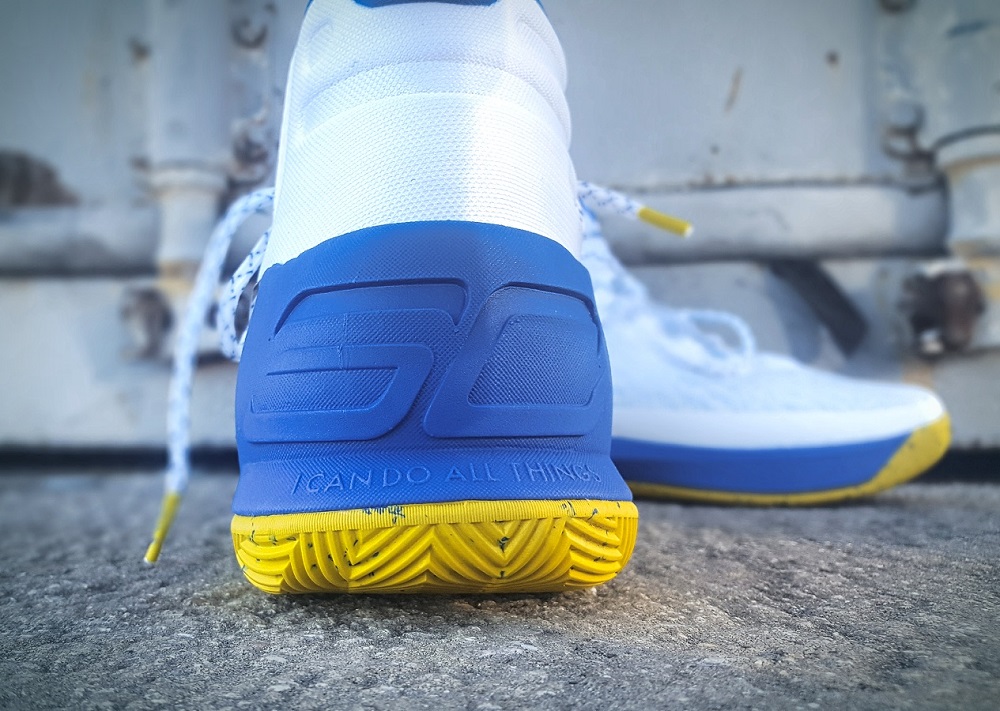 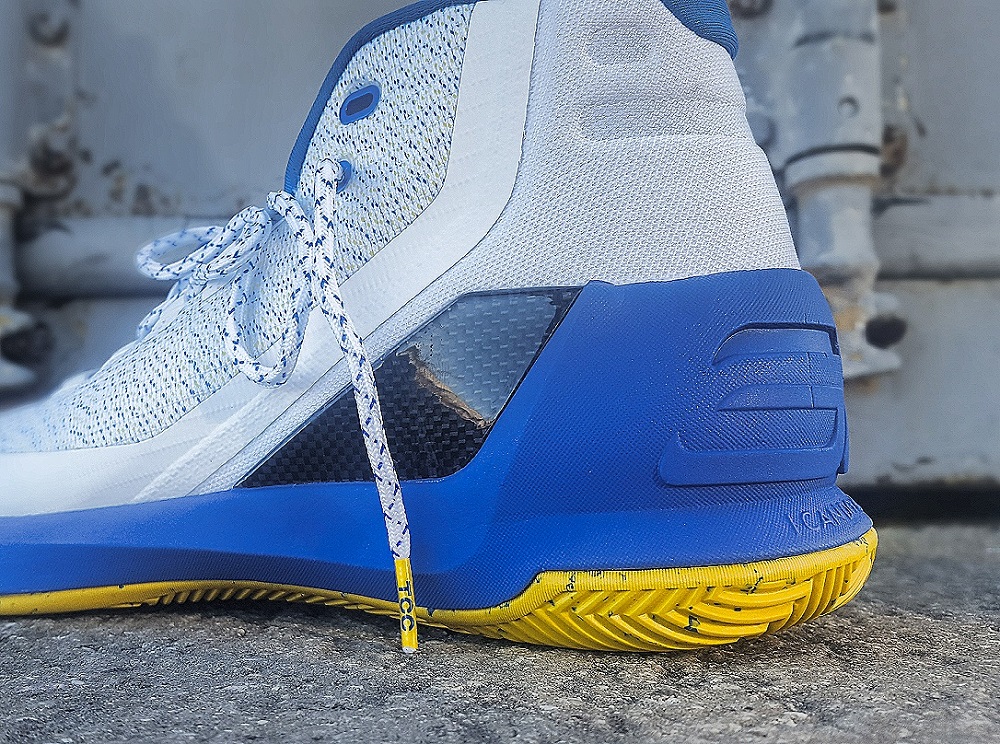 SUPPORT – This is probably the biggest difference in performance from the Curry 2. The Curry 2 was stable and supportive, but in a very subtle, smooth way. The Curry 3 hits you smack in the face with support features, mainly the carbon fiber wings, or stabilizers, on the heel. These wings are meant to keep the heel upright and going forward instead of wasting time trying to find your footing. I had no stability issues when testing, so the assumption is that they worked. With the heel being rounded for smooth transition, a little extra lateral support in that area is welcome.

Originally, the thought was the wings were tied to the carbon midfoot shank, but nope, no support cage. The shank is kind of small and separate, but no worries — the foam housing of the midsole is thick and fairly stiff so the shank really isn’t needed. Midfoot support is solid and the sole is flat from heel to toe so no wrong-way bends.

While the forefoot does not have an outrigger, it does flare out wider than the upper for a wide, solid base. Around the toes and forefoot is a fuse layer for durability that also helps the Threadborne with containment on hard cuts and moves. The worst feeling playing ball is your foot trying to go one way and waiting on the shoe to catch up. Well, that and losing — losing is a bad feeling, and it sucks. 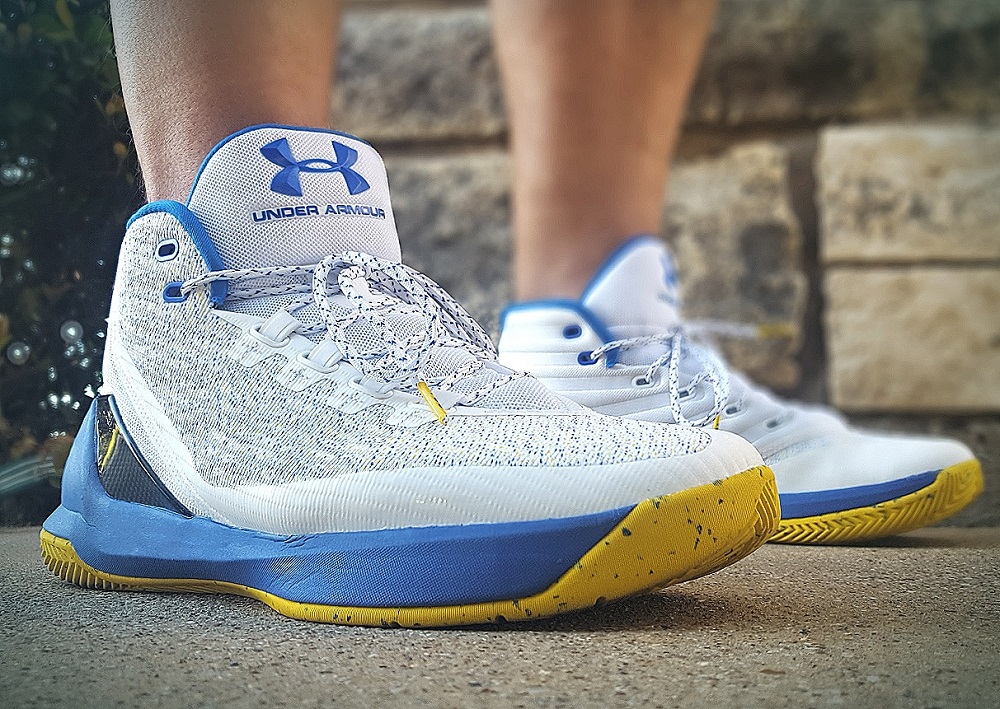 OVERALL – The Curry 3 feels like a completely different line than the Curry 2, and honestly feels like an evolution of the Curry 1. Bringing the loved Anafoam back to the fold while also including a more solid heel counter and ankle padding are things that were all left in the factory on the Curry 2, so if you didn’t like the 2, here ya go. However, don’t think this means if you liked the 2, the 3 will be bad — not at all. You still get great traction, the same Charged cushioning, and great lockdown after a short break in.

If you are looking for quick response and death-grip sticky soles, look no further. With the almost completely different uppers and designs of the Curry 2 and 3, who knows what we will see next. Hopefully, it includes Micro G in some form, or at least a Charged foam like that found in the Gemini series, but what Curry wants, Curry gets. This is, after all, the Curry 3 — and it works. 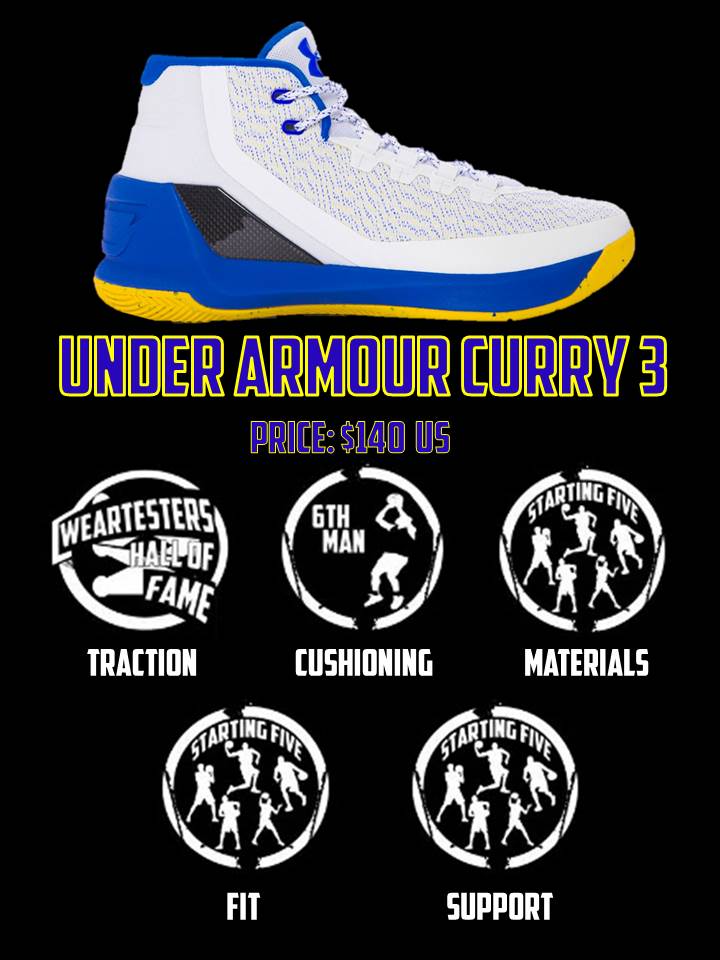