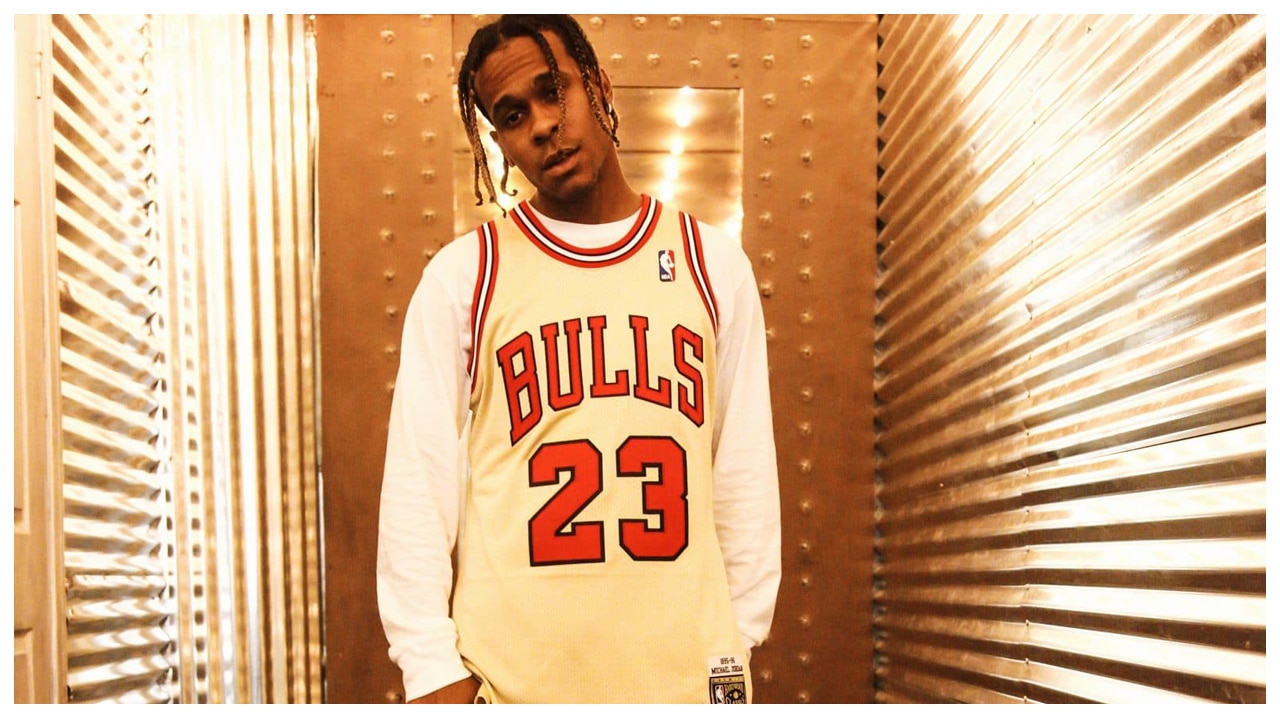 Throwback jerseys and fitted hats. Hardwood Classics jackets, breakaway warmups and vintage shorts. The dress code of a new generation. Nostalgia is the new cool, but how did this all start? Mitchell & Ness Nostalgia Co. The apparel industry, which has become more lucrative over time, has seen a boom in authentic ‘80s and ‘90s sports categories recently.

Plenty have heard the name Mitchell & Ness, yet the company’s history may surprise you. It began as a golf and tennis apparel provider. Founders Frank Mitchell, a former AAU tennis and wrestling champ, and Charles Ness, an avid golfer, together founded Mitchell & Ness Sporting Goods in 1904 based in Philadelphia.

With its headquarters still firmly established on the East Coast, the brand looked to migrate West. Located in the suburbs of Irvine, Calif., the new offices became home to CEO Kevin Wulff and his staff in 2017. We sat down with the executive and learned about the brand’s heritage, licensing deals with each major sports league in the United States and projections heading into 2020.

Wear Testers (Michael Silver): Which sports organization was first to jump on board with a long-term relationship?

Kevin Wulff: Major League Baseball back in the 1990’s told us they were getting a lot of requests for certain products. To fix and repair old jerseys. That’s when we launched the Cooperstown logo, which started this whole craze into vintage jerseys and throwbacks. That’s when it really took off.

Now being part of all the sports leagues across the country, what new projects are you working on?

Major League Soccer is a prime example, we do a lot of different marks with them. The league’s upcoming 25th anniversary, which will be in Los Angeles for the All-Star Game, will be the launch of the original marks when the league started with its core teams. Each league has different rights and agreements, but obviously we are known for vintage, retro looks and telling those stories.

M&N has its roots firmly established in Philadelphia. How did you choose Irvine for the West Coast edition?

We moved to a new HQ in Philly, a beautiful home with over 20,000 sq. ft. right off of Rittenhouse Square. It’s a converted 5-story home that fits our brand so well with all the nostalgia of the architecture. Philly is still our headquarters and we do great business on the East Coast. That’s where we do our in-line apparel and authentics. When we bought the company (from Adidas in 2015), we moved our Boston offices and our distribution center is also out here. We also house our Latin America and Asia Pacific markets from California.

We’ve created this really cool group of talented people in our energy division. We’re launching branded product, not just licensed. Our collabs with some of the coolest brands in the world from Jordan Brand to Bape to Kith and those types are all done here. We also have our fashion product, taking our key silhouettes from the leagues and doing really great fashion. The growth and brand recognition out here has been great and expanding to new markets as well.

You touched on collaborations and working alongside these established brands. How have you embraced this new generation and culture over time?

We are without a doubt the strongest and coolest. Data out there will support that within the license industry. Our brand is very strong, and I would not have bought the company if the brand was not premier. If it didn’t have that unbelievable luster and glow to it, because all I know how to do is really continuing to build brands and do quality business. Our brand is known for its utmost quality, innovation and amazing heritage of being 115 years old. This is our 115th year anniversary this year. That’s what our team that we brought together does really well. We don’t do lower end products and distribution, we do premium quality products. We have a real brand and that’s why the league’s and our partners like us.

Let’s talk about next year with key activations lined up in Los Angeles. MLB and MLS are both set to host All-Star Games at Dodger Stadium and Banc of California Stadium, respectively. What does M&N have in the works?

We’re going to take over a major store, Fred Segal, located on the corner of La Cienega and Sunset Blvd. We’ll be doing a series of unbelievable collabs for close to seven weeks. Bringing in new partners during that time and highlighting the week of each All-Star Game.

Can you speak about e-commerce and how that has shifted over time? Your company still has brick and mortar retail space, but also a large online distribution.

We have a large number of initiatives. One that we launched from the beginning was finding new partners and redesigning our website and e-commerce platform. We’ve grown our business dramatically online, in addition to opening new stores in London and Los Angeles and our flagship store in Philadelphia. From a brand and storytelling perspective, to do justice for our product innovations and collabs, that was one of first initiatives.

Travis Scott for example, we did a project with him and Bleacher Report and our site crashed. Direct-to-consumer is important, being able to tell the story the way we want to tell it and all of the content we launch on the site and commercialization has been fantastic.

How has social media changed your business landscape? Is it normal now to focus on social first when marketing new products?

Our marketing division was rebuilt from scratch. We brought our head of European marketing over, Guy Hilton, and love the things he is doing. He previously worked for the iconic brand Converse and really gets it. Social media is the cornerstone of what we do. We have so many celebrities and athletes buying and wearing our product. Social media is our number one vehicle by far and has served us pretty well.

Speaking of collaborations and special projects like Travis Scott, Bape, Kith, etc. How do those conversations start with yourself and brands your looking to work with?

It varies by project. I would say the majority of the ones you listed, those companies came to us. Kith I’ve known for a long time. I think we were one of the first collabs they did, when I was the president and CEO of ASICS, with Ronny Fieg. We have a long standing relationship there and people know that our team is very brand centric. We actually got a lead on Bape from Don C. He’s been doing a lot of things with us over time and is phenomenal with nostalgic jerseys, throwback, and headwear. His shorts exploded, the Lakers edition that LeBron James wore to the NBA Summer League in Las Vegas. It’s a community where we all get together and talk, going to certain trade shows. Bape felt very organic, they loved the idea and wanted to work with us. It goes both ways, sometimes we say, ‘Hey that’s a cool brand’ and reach out to them.

With your previous background at ASICS, is there any crossover appeal and interest in doing more footwear?

There is! We did a footwear launch previously with Clear Weather. It was an old school tennis shoe and sold out immediately. We’re looking at a couple of other things. When I was still with ASICS, I learned more about the M&N brand was from a collab we did to benefit the Arthur Ashe Foundation. We launched it at Grand Central Station around the U.S. Open tennis tournament. We did the apparel, they did the footwear and it was wild. We are exploring some new ideas that may launch around the summer All-Star activities with Fred Segal.

That went over huge. We did that at ComplexCon in Chicago too and will probably do it with them again next year. Obviously, it sold out immediately. Working with an artist on that level speaks to our brand strength. We’ve also done work with Bruno Mars for his recent tour. We’ve got a lot of other announcements that we are looking to pop culture as part of our key initiatives.

What is the timeline from concept and design to production and roll out look like for specialty items like the Los Angeles Lakers one?

A cut and sew piece, like a fashion or in-line jersey takes 8-9 months. That includes the design element, the league approvals, various sample rounds making sure it’s the highest quality. Once you get the orders, then you go into production with the quantities. Our product line managers are updating us every week of the process moving, working on pricing and with the factories, getting the right materials, it’s a quite sophisticated process.

What else is Mitchell & Ness looking forward to in 2020? Are there additional milestone moments to highlight?

With our key partners were going to be doing future releases with them. We have a whole collection of fashion product. Taking jerseys, names and numbers, and putting camo prints to them. You’re going to see a lot more of our branded product, the script M&N intertwined will be an emphasis from marketing. Another thing, no one on the licensing side has done a great job with women’s lines. We’ve created a women’s division here with collabs for women, women’s artist’s and brands. We will have jerseys, shorts, and tops that are redesigned to fit a woman’s body. A lot of energy there, on social media, new spokespersons that will include female athletes. We’re really excited about that. We also have plans to create new content from photoshoots to podcasts, and beyond.

To find the latest offerings by Mitchell & Ness visit their online shop and follow them socially @mitchellandness.