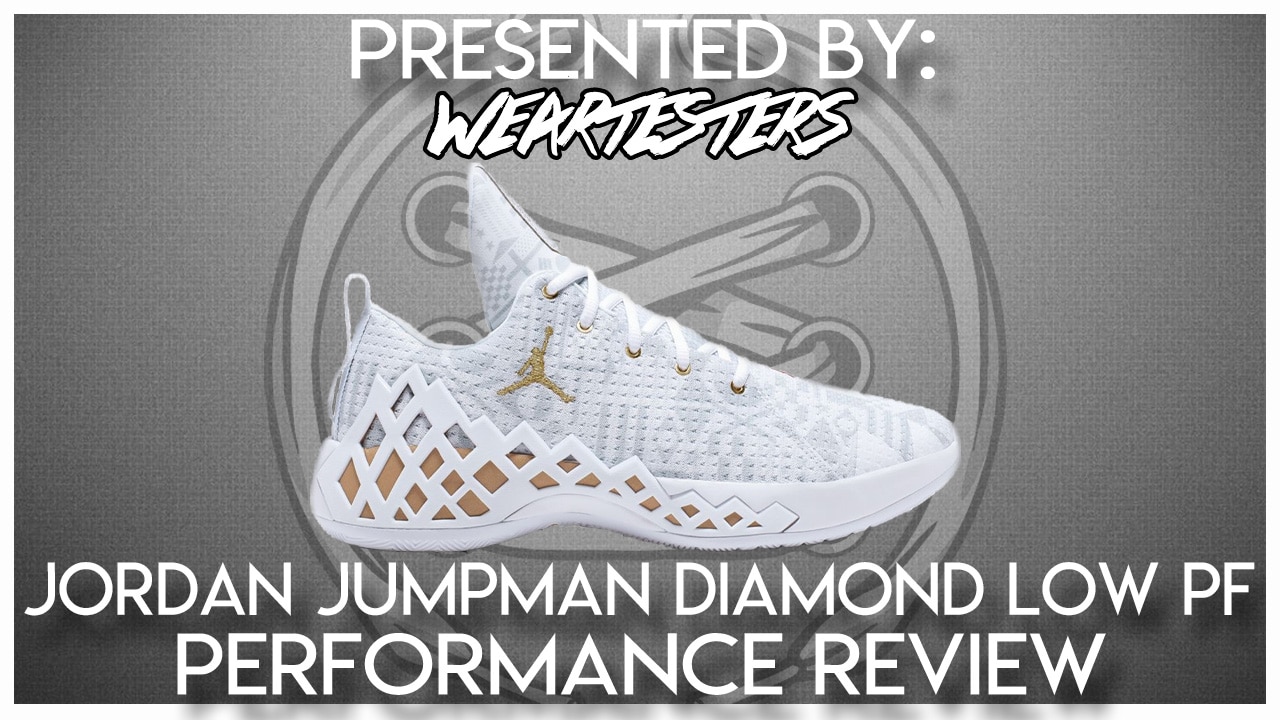 Long before the Jordan Jumpman Diamond, Team Jumpman models were considered a thing of the past. Not anymore. Over the past year or so, Jordan Brand has been coming up with budget-friendly models that do more than just sit on shelves, they perform.

The traction of the Jordan Jumpman Diamond Low is interesting. It utilizes a multidirectional diamond and herringbone traction pattern that’s very thinly and closely aligned. This particular model was purchased from Asia, so it also provided XDR rubber. One gripe I did have, and not just for this Jordan Model but for a lot of Nike and Jordan shoes, is the clear coating they apply to certain outsoles which causes a lot of slippage till it wears off. I honestly don’t believe it’s necessary. I want something to grip the hell out of the court, rather than having to break in the outsole. After the coating rubbed off, the traction was great. I was able to stop on a dime and gather myself quick even when the court wasn’t clean. An occasional quick wipe and I was good to go. I do wish the outsole traction was thicker with larger gaps so it didn’t pick up dust in between the grooves. However, as stated before, one wipe and I was good to go. Outdoor ballers beware as the thin traction lines frayed quickly.

The cushion of the Jumpman Diamond is made up of a soft Phylon midsole and a responsive top-loaded forefoot Zoom Air unit. It felt very similar to the Why.Not.Zero2. And that’s not a bad thing because I loved how that shoe felt on foot, even as a heavy-footed player. Could they have added a small volume Zoom Air Unit in the heel? Yes. Would it make a vast difference? Probably not. I would have liked to see some heel Zoom Air implemented, but for a budget-friendly model like this I don’t expect it.

The full list of materials are a simple textile and synthetic upper, a diamond gridded cage system for lightweight support and stability, a soft phylon midsole complemented with forefoot Zoom Air, and a diamond herringbone rubber outsole. One gripe I had was very minor. The tag inside the tongue of the shoe (images can be viewed here) chafed. The message could have easily been stitched into the tongue rather than placing a layering material that caused discomfort and scratching on the front of my shin (if I wore no-show socks). Mid or crew socks are necessary. The combination of everything put together was simple while providing me all the necessities without the extra added weight (similar to the Air Jordan 34). I like what Jordan is doing and I hope they continue.

The Jordan Jumpman Diamond Low fit true to size. I ordered an overseas model which are generally built on a wider last. I did try on the US model as well and there’s not much of a difference. Wider-footers like myself are able to stay true to size while normal footers will want to try on in-store. Some may consider going down a half size due to the slight bit of extra spacing in the toe area. I like the extra little room, but your preferences may vary. The shoe seemed to contour very well to my foot so I didn’t have a problem tying them up tight.

Support comes directly from the fit of the shoe and the build. The big tongue seemed to be used on both the low and mid versions of the Jordan Jumpman Diamond and didn’t cause any hindrance once the shoe was laced tight. The Diamond gridded cage structure really gave the feeling of solid stability. My foot and heel felt locked in and ready to go. The traction (once the coating of the outsole wears off) is solid, especially on heavy defensive slides while staying in front of your opponent (unless of course your teammates don’t call out a pick and you get pummeled by a big ogre). And the soft midsole along with the forefoot Zoom Air unit provid enough responsiveness on heel to toe transition.

The Jordan Jumpman Diamond was a really dynamic shoe. It’s made for those that want to be treated seriously on the hardwood. From the price, build, fit, materials, to the overall build of the shoe, anyone who puts on this shoe is in for a fun ride. The Jordan Brand team has really stepped up their game to help people realize their flagship model isn’t the only shoe that can perform well on the court.