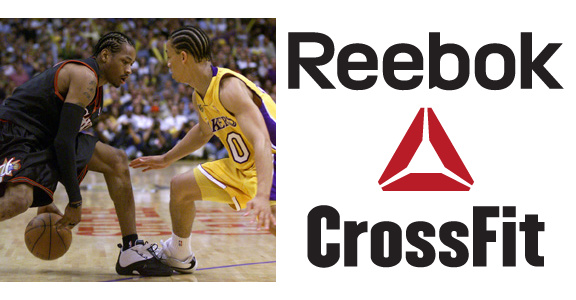 If you guys missed the news, Rick Ross went full-on “Subway Jared” and lost a ton of weight. Instead of citing a sandwich diet, Ross attributed the transformation to performing CrossFit, which is a high-intensity training program. Ross even gave a shout-out to Reebok, which has a partnership with CrossFit.

Sneakerheads may not know a whole lot about this fitness-oriented side of Reebok, instead connecting the brand to names like Allen Iverson, Dee Brown, Shaquille O’Neal, and Shawn Kemp.

Recently, the basketball side of Reebok has banked on this ’90s nostalgia; from Iverson crossing over Jordan, to Dee Brown pumping his Omni Lite sneakers before a dunk. At one point in time, Reebok competed vigorously with Nike to sign basketball players. After declaring for the NBA draft in 1993, Shaq liked Reebok enough to don a Reebok logo jacket to a recruitment meeting at the Nike campus. Shaq eventually signed a five-year deal with Reebok after that meeting.

With that said, the company hasn’t found much success in performance basketball of late, last releasing the John Wall-endorsed Season 3 ZigEscape in 2012. Wall was moved from Reebok to parent company adidas just months after releasing the ZigEscape. This shift also coincided with the phasing out of traditional performance basketball models for Reebok, as reported by SoleCollector.

Reebok was purchased by adidas in 2005 to increase market share and to better compete with Nike in North America. A series of missteps haven’t helped that cause, including the loss of the NFL contract to Nike and the $25 million lawsuit settlement for false claims on Reebok’s EasyTone line.

Despite these slip-ups, Reebok has found success in CrossFit, which saw a 13% increase in revenue for the first quarter of 2013. Reebok partnered with CrossFit in 2010, which at the time was only a three-year old program/sport. CrossFit’s annual competition in the CrossFit Games saw participation increase over 780% from 2011-2014, with 204,000 worldwide participants this year alone.

Reebok sponsors all CrossFit events and their branding is featured in more than 10,000 affiliated gyms worldwide. This success led to a company-wide logo change:

The new delta logo was actually Reebok’s CrossFit division emblem during the previous vector logo era. The new logo corresponds with the brand renovation; from drawing in consumers with pro athletes like Iverson and Wall, to appealing to everyday fitness junkies.

While Reebok continues to release the heritage basketball models we know and love (i.e. the ‘Shattered Backboard’ Shaq Attaq,) the company has a new identity moving forward, with the fit Rick Ross’ of the world leading the charge of enthusiastic consumers.

What do you think of Reebok as a brand today? Will the brand prosper alongside CrossFit’s popularity or do you feel they should have continued innovating elsewhere? Let us know in the comments below.