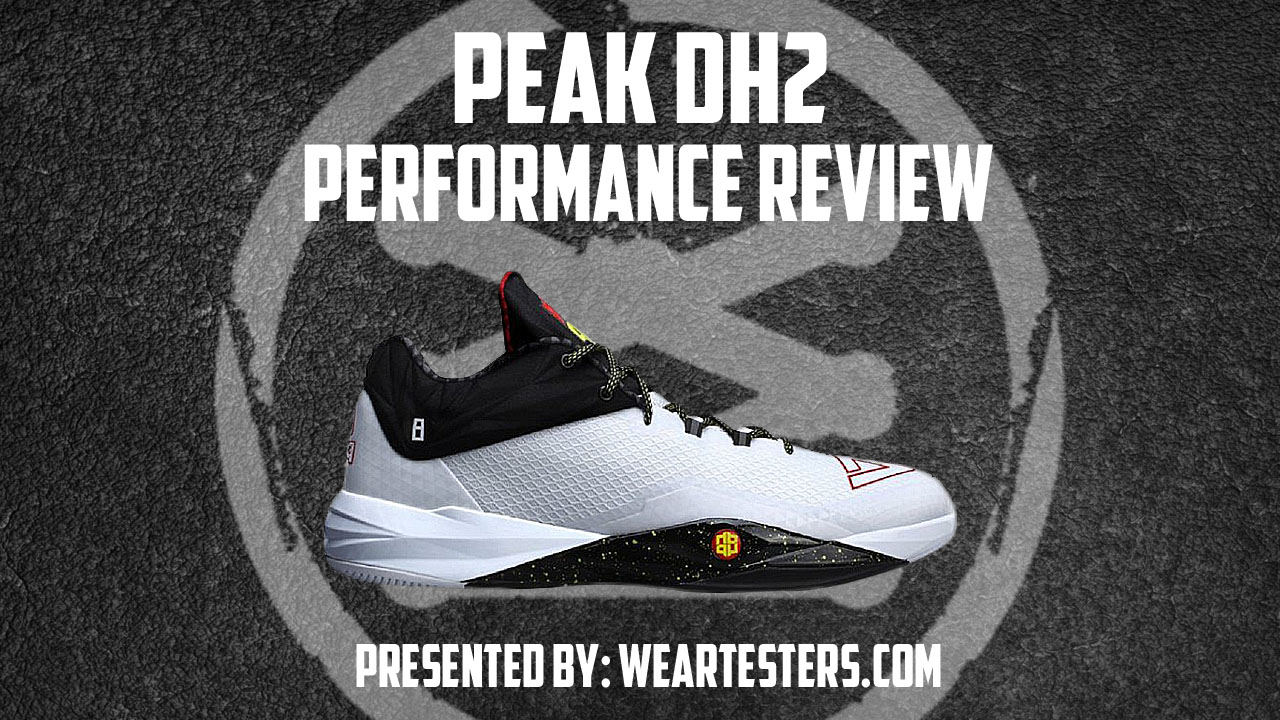 Ever since PEAK decided to try its hand at the US basketball market it realized signing NBA players was a priority. Two years ago, the brand signed a huge player — Dwight Howard (who currently leads the NBA in defensive rebounds). Last season saw the release of the DH1, his first shoe from PEAK, designed by a contest winner. That wasn’t a bad thing because the DH1 had serious traction, good materials, and the aesthetics were head-turning. The goal is to continue the good feels with the PEAK DH2, and from looking at it, the evolution is obvious, as the look has been cleaned up and streamlined. But, as you loyal fans know, looks ain’t everything — or are they?! (cue the evil laugh here)… 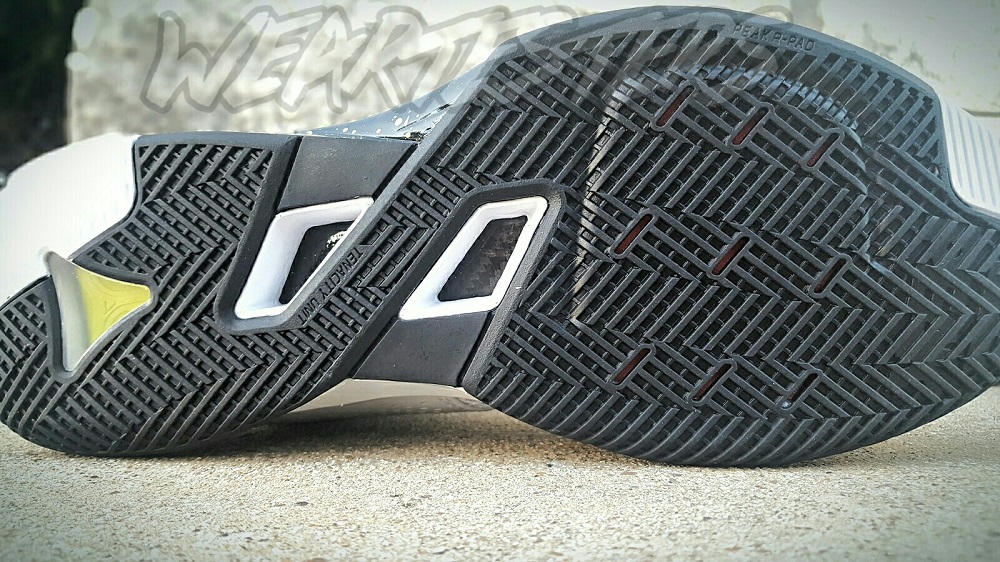 TRACTION – Last year’s traction was absolutely beastly, and it was easy to see why: full-length super-aggressive herringbone. So, like most companies, once something works…change that $#!+. PEAK went with a basket-weaving 101 design, criss-crossing flat lines across the sole, so it is almost herringbone.

On clean courts, the traction the PEAK DH2 offers is fantastic. On outdoor courts, the compound is thick and hard and will last for a long while. Add some dust, and you are in for the ride of your life. The pattern holds dust in the recessed areas between the cross-hatch and just hugs it like a long lost puppy, never letting go. Add to that the harder white areas on the lateral heel and toe, and just when you think you are safe to plant on the outside to push off, well, no one is safe. Continuous wiping helps a lot, but I still never got all of the dust off, even with a towel. Again, on clean courts, the pattern worked great. Just know the conditions on which you are playing, and bring an extra back-up pair to play in. 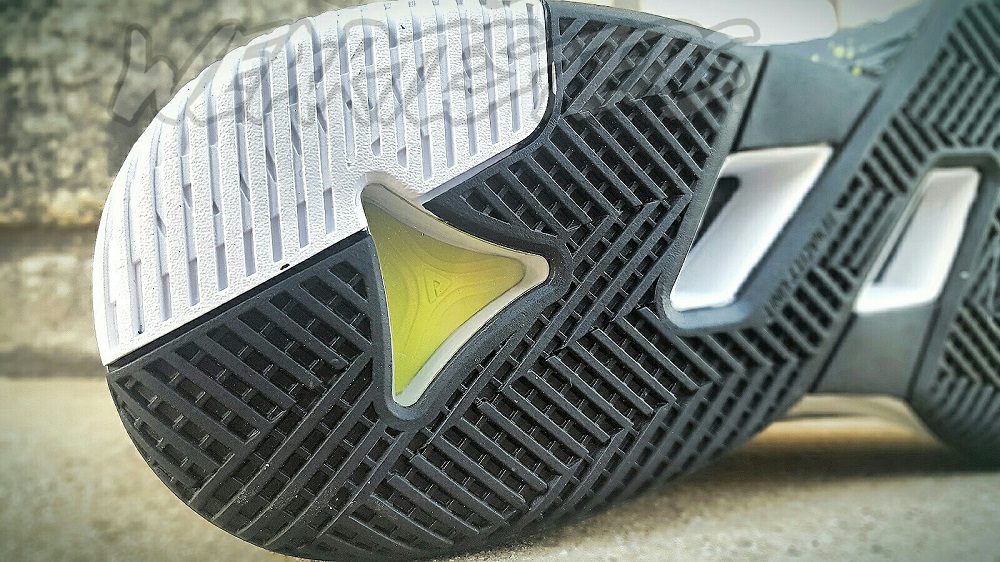 CUSHIONING – The DH2 utilizes Cushion-3, the same cushioning system as the DH1, which used the same cushioning as the Battier series. The technology has been around for a while, and while it is older, it still gets the job done. The set up works like this: there is a clear window with air inside for initial impact, foam insert to disperse force, and a denser foam around the soft yellow foam for stability. Much like a Lunarlon and Phylon carrier, or Micro G inside Charged, the softer interior absorbs impact while the harder carrier provides stability (the window is mostly for good looks). If you are looking for dynamic, bouncy, responsive cushioning from PEAK, it isn’t here. If you like the old school, dense, padded, impact protection stuff, this is your ride. The Cushion-3 absorbs force and impact so nothing comes back to haunt you while driving home (you know, when that back tightens up or those knees start to ache), but that lively feeling everyone looks for these days is just not there.

The forefoot of the PEAK DH2 features something new, at least in name, as the Team Lightning IV had the same setup: the PEAK R-Pad. If you look back up at the traction picture, you see the bubble on the forefoot — looks like Unlocked Zoom, or the Hyperrev 2016 Zoom. It isn’t, but the cushioning is a little softer for friendlier landings. It is actually a higher rebound foam (the red you see in the slots) for quicker steps and response. Does it feel responsive? Not really, but it is better than the DH1. 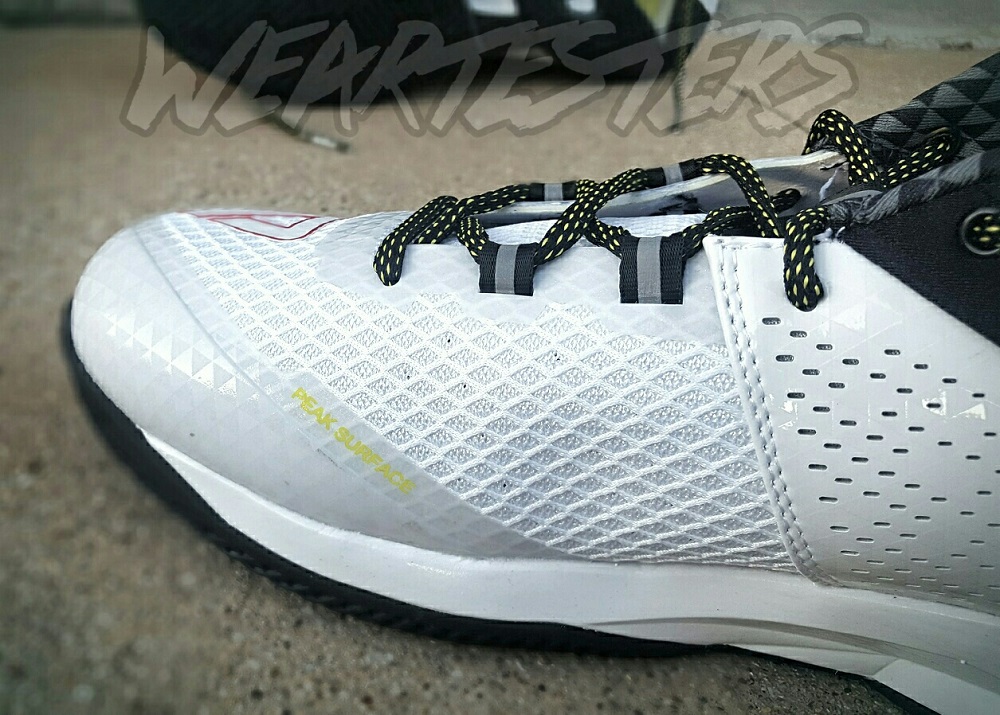 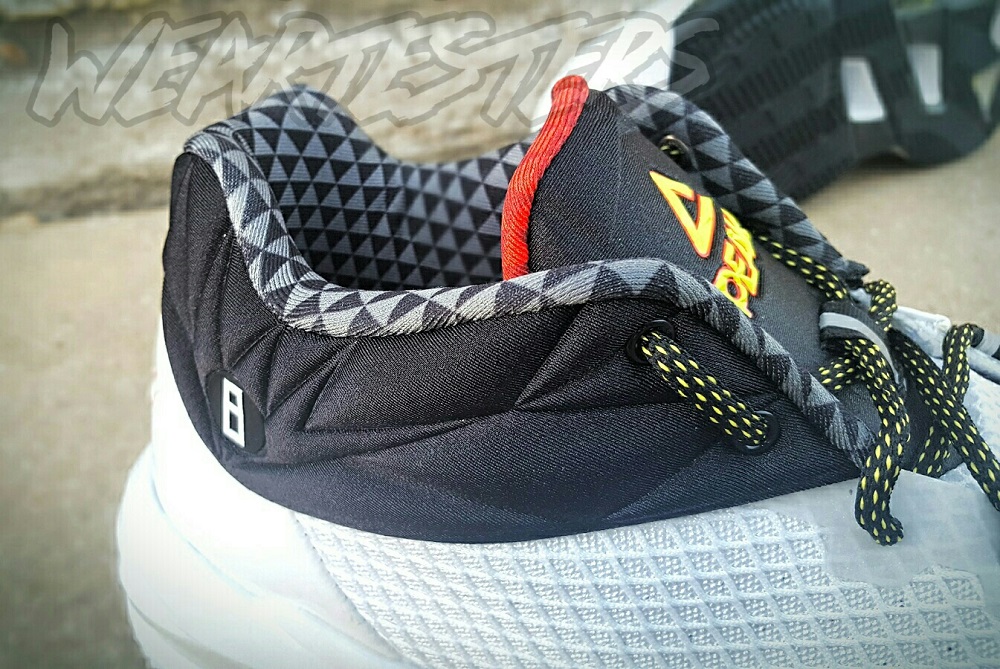 MATERIALS – Last year was exciting for PEAK, with the DH1 introducing the brand’s new upper material, PEAK Surface. The material was a stiff, overlaid textile and it was a step in the right direction from the past rubber and plastic fuse constructions that were offered. The PEAK DH2 takes it a bit further; it’s still a little stiff and has a fabric backing, so it isn’t a true woven feel, but the fuse overlays are smaller and fewer so the material does break in nicely. Plus, there is more of it; the DH1 only used it on the midfoot lace areas and toebox, where as the PEAK DH2 runs out from the heel around the toebox to the other side, stopping in the midfoot panel to be replaced by a patent synthetic material.

The bad thing about PEAK Surface is heat; there is no escape for it and your feet will roast. The tongue is open mesh, so a little flows out there, but the thick padding and reeeeally thick insole soak that sweat in and make it a science experiment in there.

The All-Star of the upper is the ankle collar. The padding is very much Nike Pro Combat — thick padding covered by a neoprene mesh, and it feels great around your ankle and heel. 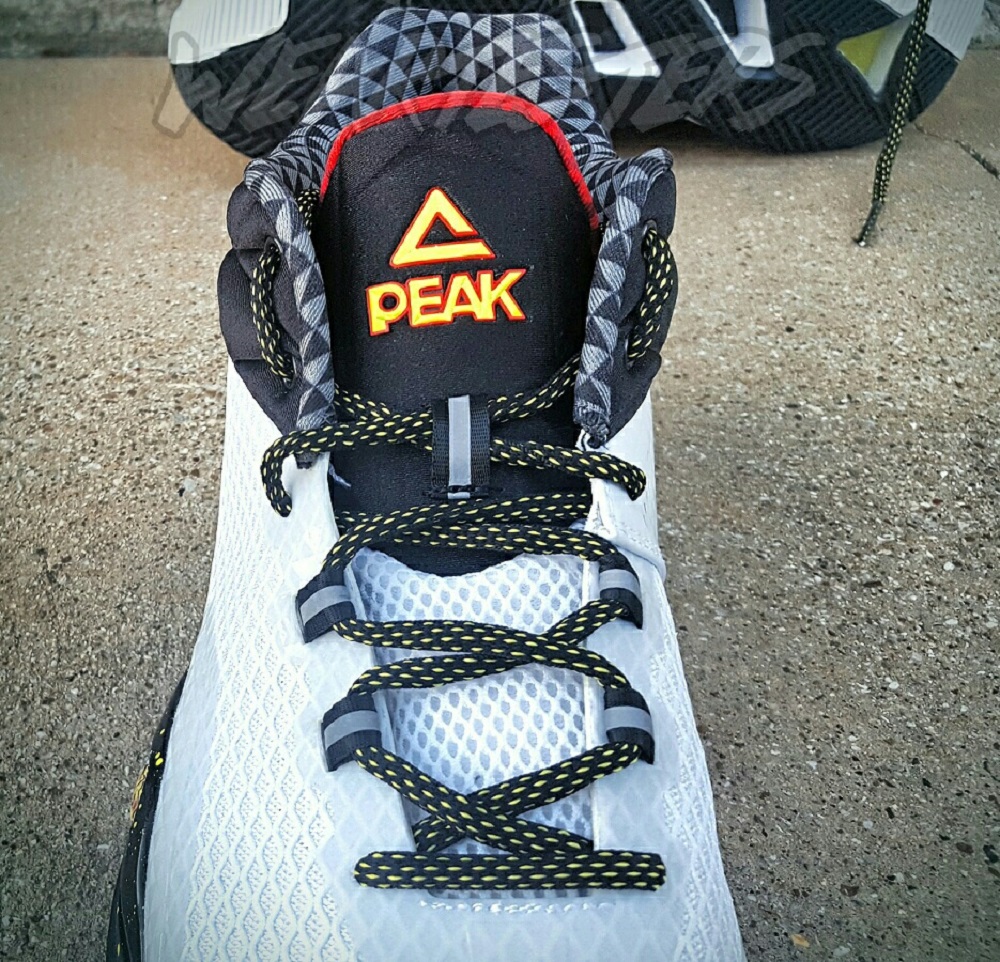 FIT – The more things change…fit still kills the PEAK DH2. Last year, as I stated in the DH1 review, I was sent an 11 in the Lighting and a 12 in the DH1, and they both fit the same. This year, I was sent a 12 in the PEAK DH2 and a 10.5 in the TP-IV. The DH2, lengthwise feels perfect, but there are vast amounts of space above the toes. The shoe bubbles right at the bottom laces and has a horn effect — like I’m smuggling baby rhinos or something.

It’s a shame, because the midfoot and heel are perfect fits. The PEAK Surface does mold quickly around your foot, and we already talked about the ankle collar and how well it fits and feels. The lacing system has fit straps that pull the foot directly into the footbed and the spacing on lace holes really lets you adjust and pull as needed. If they could only eliminate that rhino problem.

SUPPORT – One area with no problems at all is support. The midfoot is held up with the PEAK Tenacity unit, which is basically a midfoot shank. The unit runs completely across the midfoot arch area and extends forward almost to the ball of the foot and back to the halfway point of the heel. You are not going to bend your foot down under your arch. The PEAK DH2 uses a TPU shank where the DH1 used a carbon fiber, but the properties still work (I actually think if the shank was sized down the cushioning would improve, but what do I know?).

There is a wide base in the forefoot topped out with an outrigger that is just right; it never got in my way on cuts or moves, which is ideal. Well-placed fuse at the lateral forefoot helps with containment, keeping your foot locked over the footbed. The heel used the lacing system and the padded ankle to really lock in with no movement, so none of that sneaky sideways shifting. The heel counter is actually kind of soft and not overly large, but the molding of the midsole keeps you upright.

Transition for a shoe with a large shank is sometimes blocky or slappy (yes, it’s a word), but surprisingly, the PEAK DH2 feels natural while running and changing direction. It would seem Dwight needs help with his speed so he opted for a low cut that would feel better while moving, and he got it. 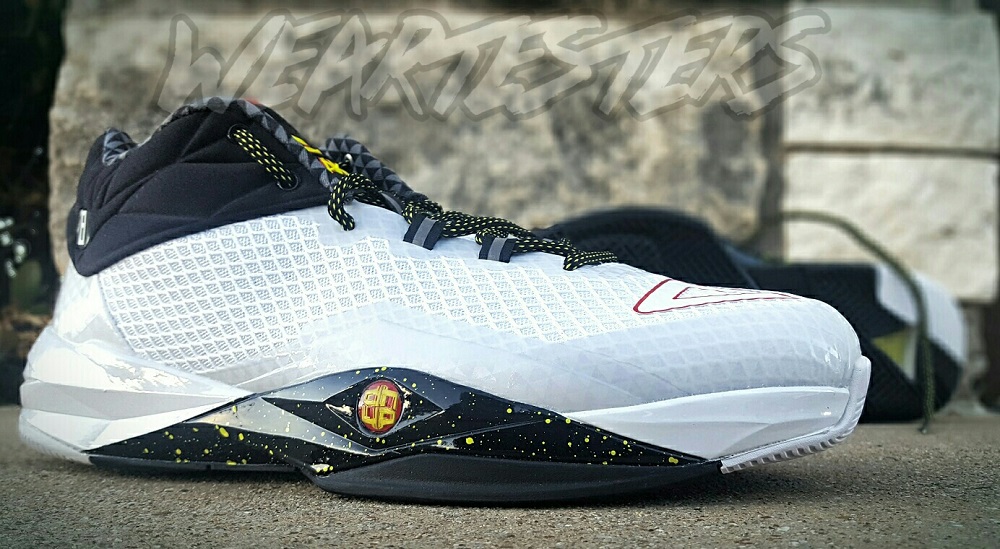 OVERALL – This is the evolution of a shoe and the evolution of a brand. As PEAK becomes a bigger player in the market it will have to make advances in performance and marketability to stay relevant. The PEAK DH2 is a good step. It utilizes a material that mimics many factors of “big boy” innovation, cushioning that is serviceable but has a technologically advanced name (what happened to Cushion 1 and 2?), and honestly, the PEAK DH2 looks cool as hell. Seriously, that is a great looking silhouette, and the contrasting materials just look good, and honestly, that is what draws the consumer’s eyes on websites and shelves.

From my perspective, the PEAK DH2 offers almost great traction, good materials, and support that will make any aging warrior happy. Tweak that cushioning and give us back the herringbone pattern and the DH3 could be great. Oh, and let’s fix that forefoot area — no one needs room for the in-laws to move in. 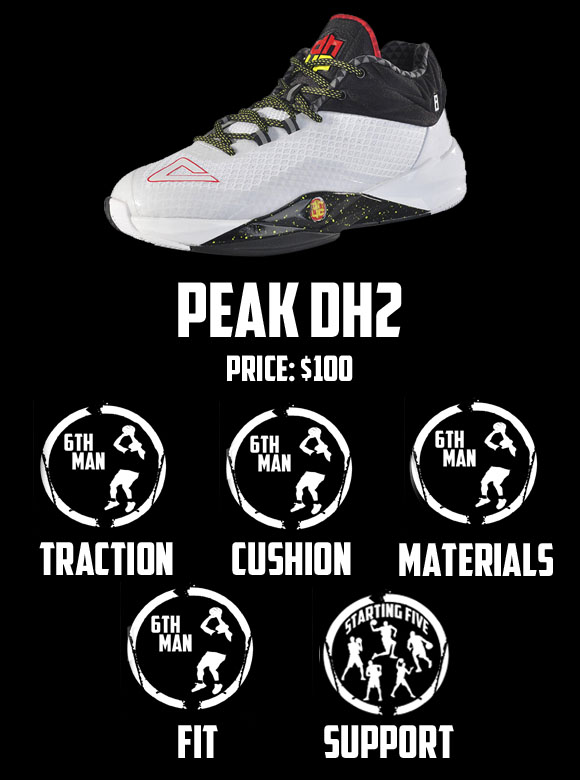