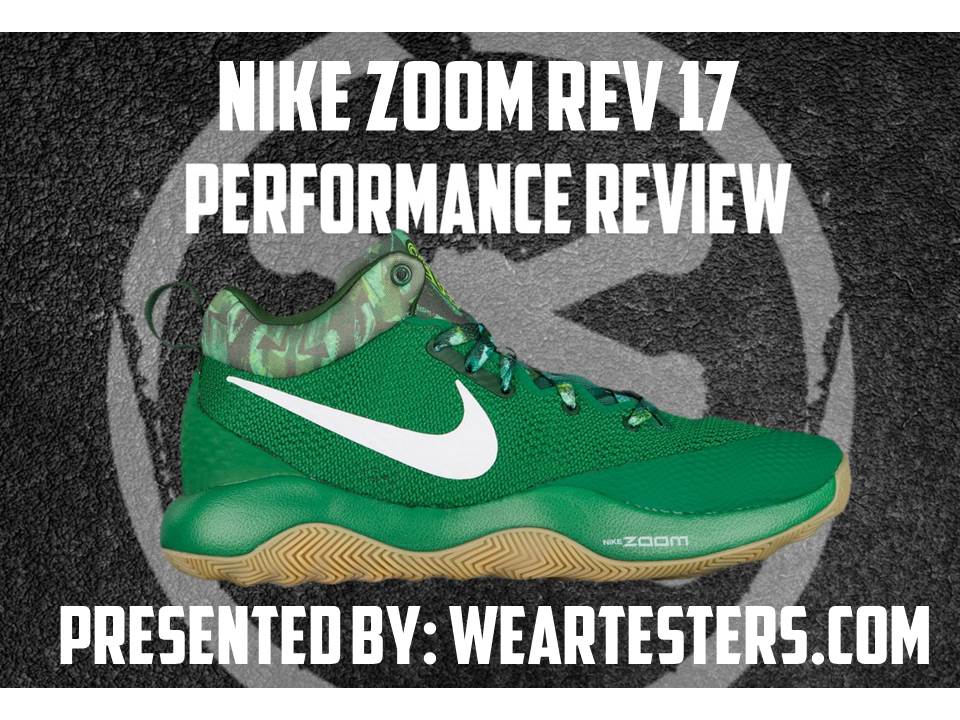 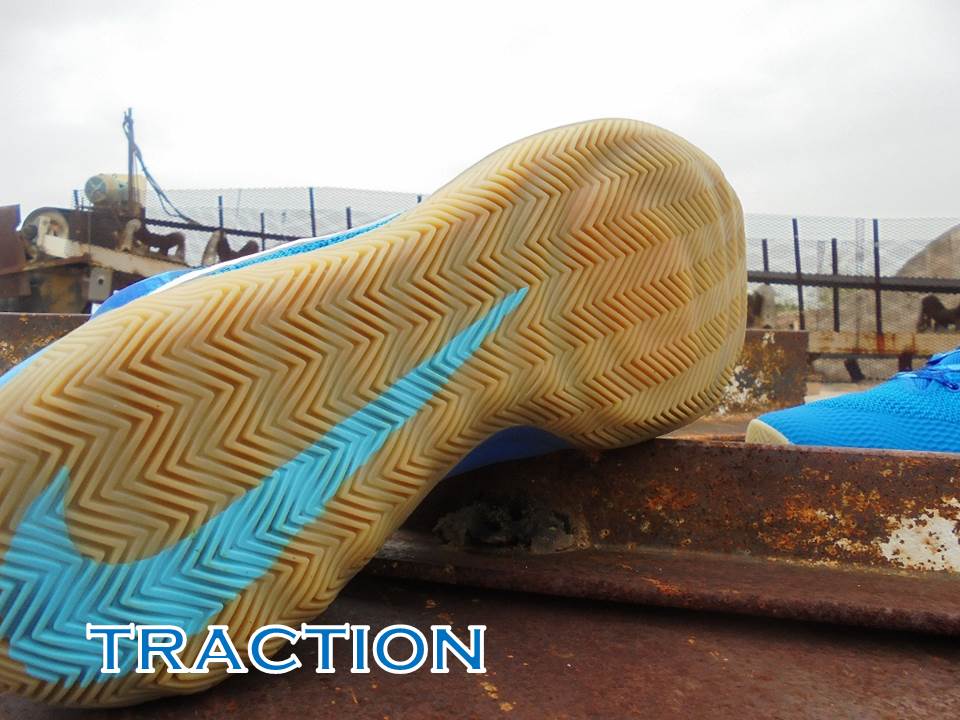 Tricky, tricky traction. The gum bottoms seemed to stick perfectly in warmups and on lateral moves they stayed in complete contact with the floor, holding on defense and pushing off to change directions. However, on straight-line starts and stops, the traction was less than stellar. The shoe didn’t slip every time, only on really heavy, hard changes — such as running full speed on offense and the other team gets a steal, so you stop and head back on defense hard — then the stop was slow. But slight jab steps or fake cuts, when you are just trying to get a little motion? The Rev was on.

Here is the problem, though: it didn’t happen every time. Much like the Jordan XXXI, it happened just enough to make me wonder what the shoe would do, which is never a good thing. This has to be the wavy outsole coupled with the flat herringbone — peak that traction pattern and the grip would have possibly been all-time. 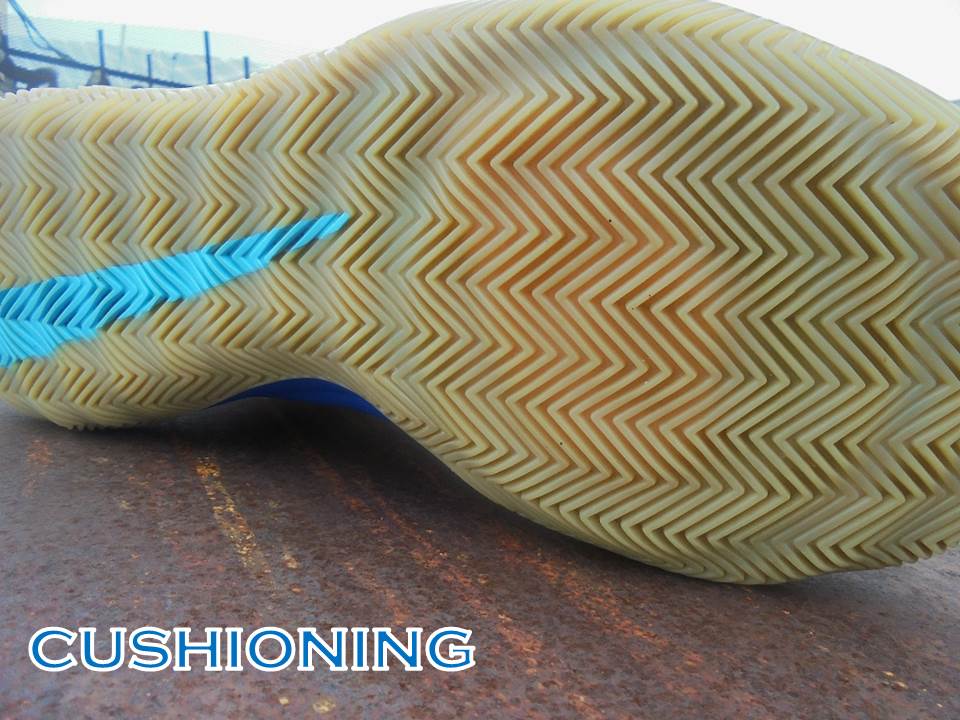 The cushioning may have been the most surprising part of the Rev 17. The forefoot is a bottom-loaded full area Zoom unit and it can actually be felt, continuing the Rev legacy of forefoot response. This isn’t unlocked, but the compression and spring-back feels great while playing — no delay in motion, no bottoming out on landings, and lateral movements are steady and stable.

The heel is just Phylon, but honestly, you can’t really tell. It compresses perfectly while playing and is stable on landings if you happen to be a little off on a rebound. Don’t let the lack of Zoom affect your opinion of performance, it still works well; it just may not last as long since most Nike foams break down before the internal Zoom does. Until then, enjoy a smooth, low ride with great response and impact protection.

Another detail of the shoe that affects cushioning is the wavy outsole. The idea is very much like the Zig series from Reebok, only not as dramatic. The midsole waves compress on impact, allowing the sole to flatten and rebound, providing a “crash pad” effect. This smooths transition (in theory) and absorbs energy. It can be felt when playing, and at first it distracted me a little, but after a couple of trips up and down the feeling became secondary. 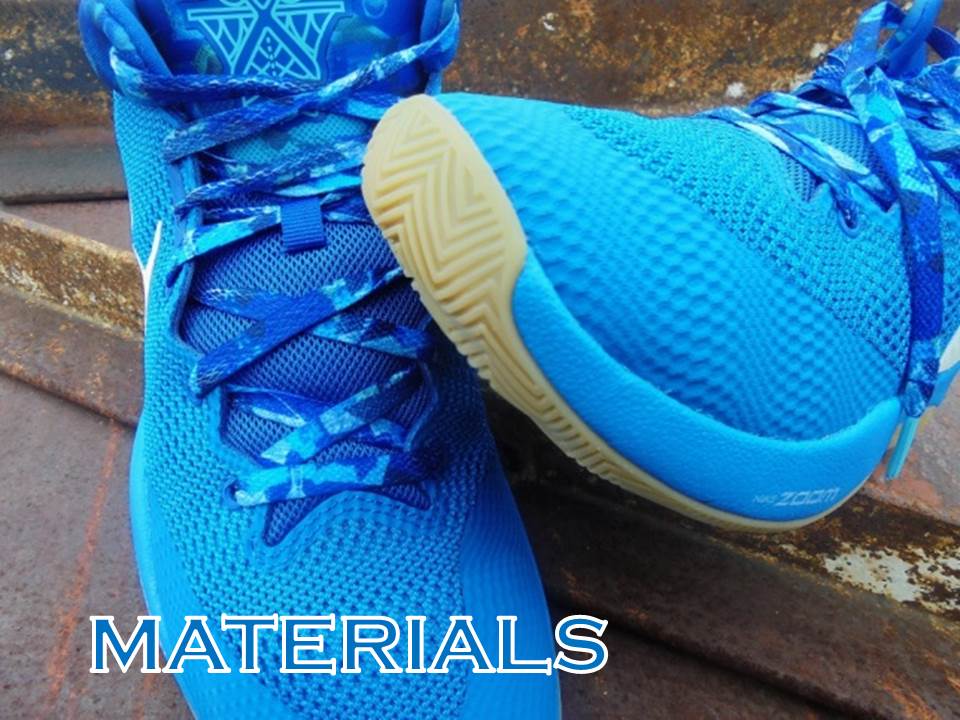 Although the upper looks like the Kyrie 2, it ain’t. Made up of a soft mesh with thick foam backing, the Rev 17 is flexible and comfortable from the start. The mesh is almost running shoe comfy, which was a complete surprise with the recent history of Nike putting nylon backing and stiffening up its team shoes (for…durability? shape? general pain?).

There are some fused areas placed in the high wear zones like the toebox and lace holes but those are practical applications that improve the shoe. The ankle collar is thin everywhere except the last inch of height. There you meet a thick, rolled padding that is almost adidas Geofit-like. The collar wraps up tight and holds the shoe from up and down sliding while playing. The tongue is more of the same; it’s thickly padded and wraps nicely around the front of the foot. Overall, a very ’90s design as far as padding and looks, and it works. 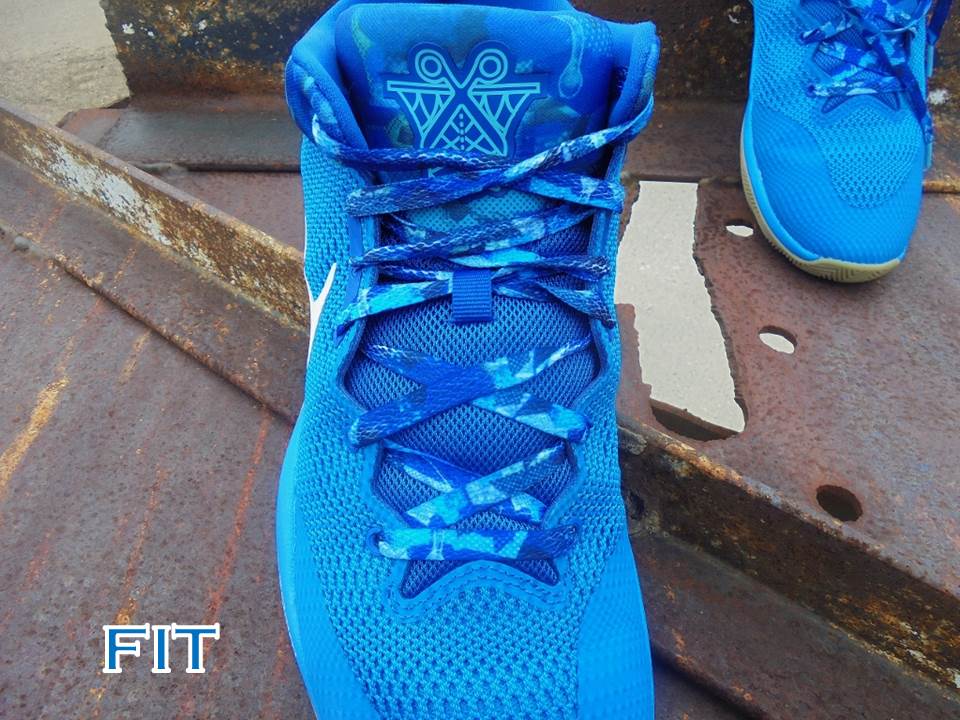 BAM! Fit is dead-on. The magical thing about mesh, when it isn’t backed by hard nylon or fused over, is that it fits and feels great on-foot. The mesh on the Rev 17 is technically a textile, according to Nike.com (although the site has been known to make mistakes), but it is very much like the original Hyperfuse — only soft, which makes it form fitting and little to no break-in time.

The forefoot was wrapped like a second skin, even with a little space at the end (my normal .5 inch between my toe and the shoe). The lacing system is easily adjustable and pulls the upper around the foot in all areas, so there is no slipping or sliding inside the shoe. Normal to a little wide feet should be perfect. For really wide-footers, beware; a try-on in store will help you out.

The ankle collar talked about in the Fit section works to grab and hold your heel while that lacing system pulls the shoe up and around, pulling your foot down into the heel counter. The padding on the back of the mesh works to take up any dead space without feeling super-constrictive. Wide, old-school laces don’t apply too much pressure, except for that next to last hole right at the ankle. I felt a little pressure there but it was easily remedied by a little loosening. No compromise on fit because of it, and the extra comfort was needed. Honestly, this may be the fit of the year. 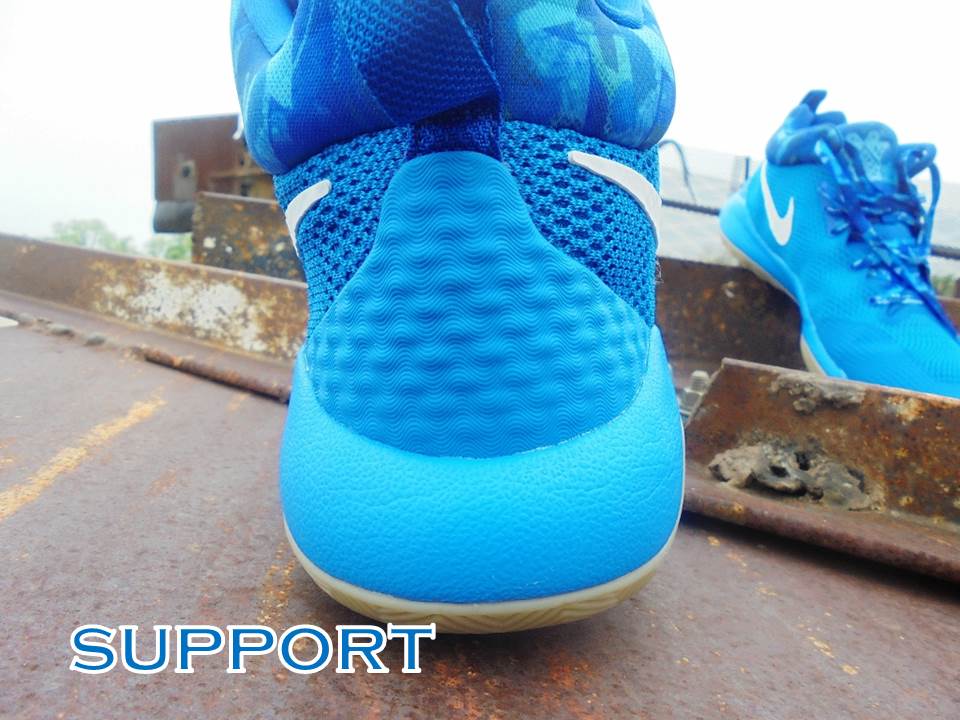 Support comes from two things: fit and the midsole. The fit we talked about, but when a shoe has little to no movement then your ankle is more likely to stay upright — and your feet will love you. The heel counter is just a fused area, on the outside; inside the heel there is a solid plastic counter that rides just below the painful height — no achilles rubbing, but you still feel secure.

The midsole is your biggest help here, as it wraps up around the outside of your foot and keeps you centered over the footbed. Hard cuts and lateral movements were solid and quick — I could push off the outside of my foot like a starting block and get into my next move with no delay. Again, wide-footers, this is where you may have some problems, as the Phylon wraps snugly up and around and doesn’t have much give. The laces pull you into the midsole tight and keep your foot and shoe combo feeling like one unit that is connected and ready. 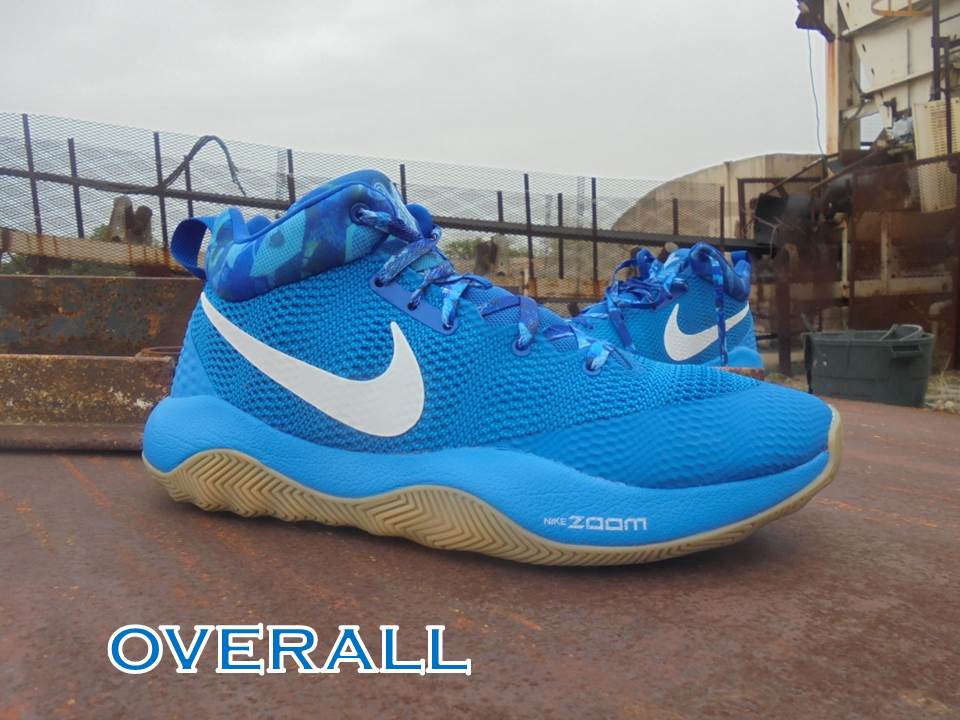 We at WearTesters were worried when we saw the initial images that flaunted visible forefoot Zoom and the wavy outsole. Then we saw the tech specs and got more worried because it was only forefoot Zoom and the upper looked like a step back as far as materials. Well, on-foot, all of those initial tech specs and ideas were confirmed, except one: the shoe doesn’t suck — far from it.

Although the Zoom Rev 17 is still a step behind the 2016 (and 2015), it is an extremely solid option for someone looking for quickness, forefoot cushioning while still riding low, and a great fit. If you need extra support or rock a wide foot, you may want to try these on first.

I’m not sure what else Nike can strip out of the Rev line and still make it work, but I hope we don’t find out – the Hyperrev line had been a favorite of ours for the last 4 years. If Nike is smart, they will keep the idea of an actual high-performing Team shoe at the front of the line. 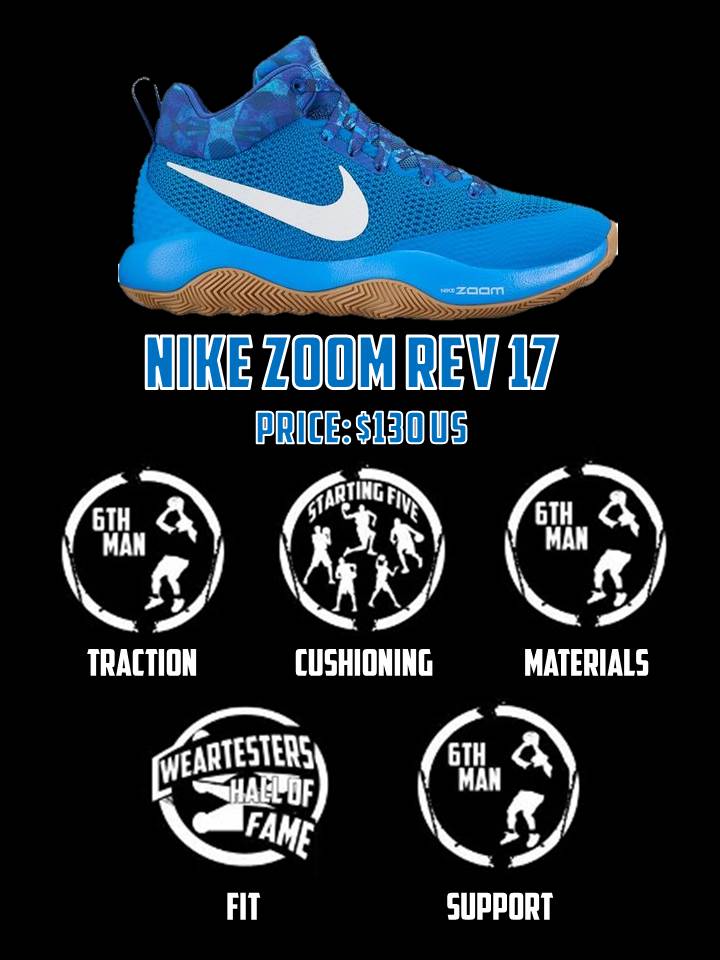