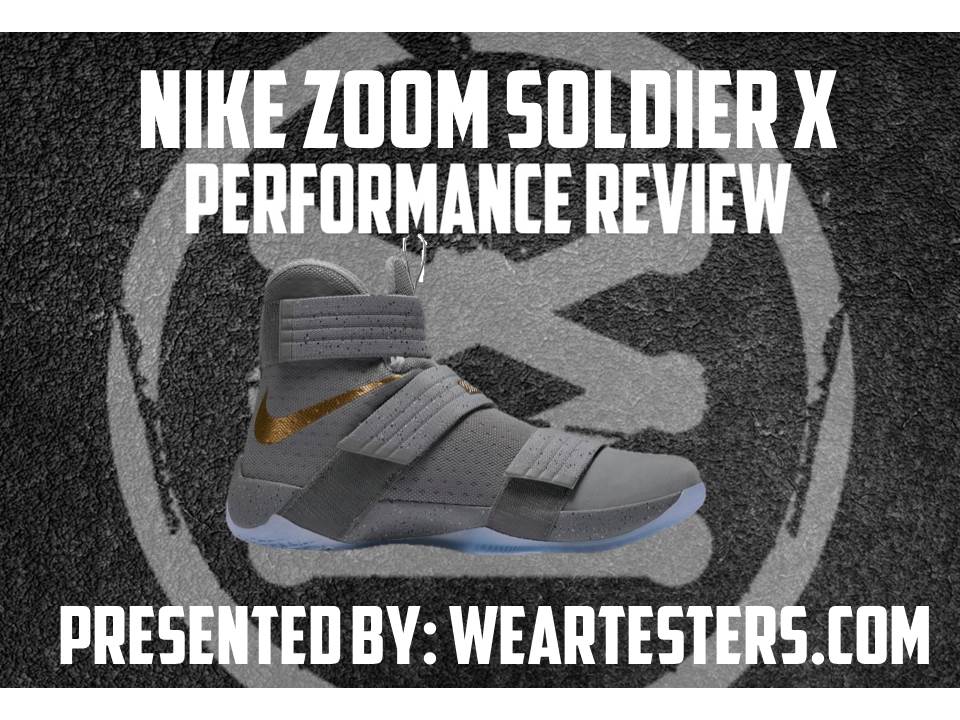 The LeBron Soldier line was originally a concept for teams who wanted the “Witness” mystique without the LeBron price tag. Pushing $200 just doesn’t make sense from a high school team perspective, or mom and dad’s wallets either. To build the name, much like Jordan Brand in the mid-’90s, Nike delivered the Soldier. Over the years, the line has taken pieces from the past year’s game shoe and hints at the next year’s game shoe, all while coming in time for the NBA Playoffs (one would think the Elite would be for Playoffs…). What started out as a budget line for LeBron James has, in the last three years, turned into his preferred game shoe. But is the Nike Zoom LeBron Soldier X better than the LeBron XIII? Or the Soldier IX? Stop, let’s review before a chariot race breaks out (Roman numerals, get it?)… 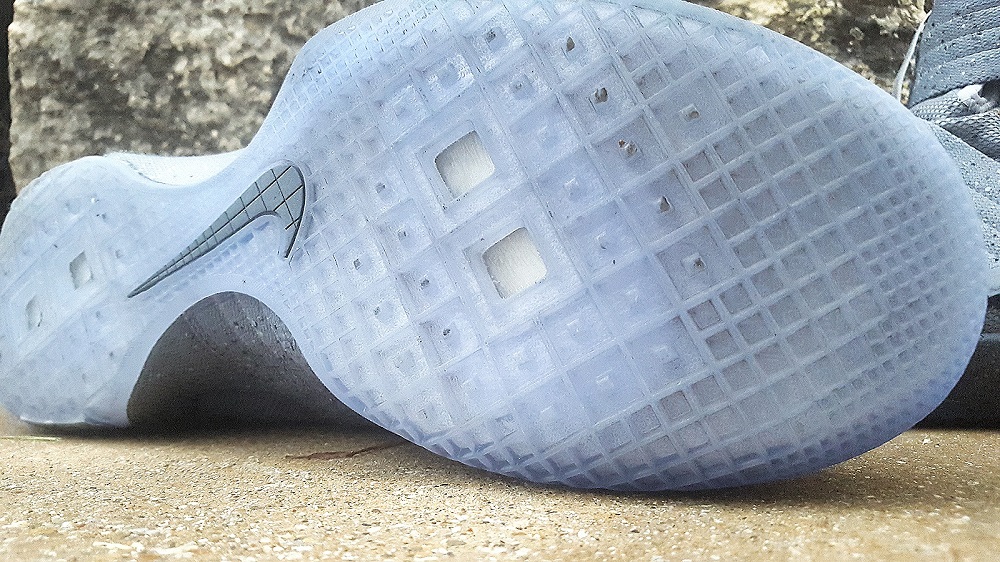 TRACTION – Okay, little disclosure if you don’t know me – I am a little heavier than some. At 5’10” and 200-205 pounds, the build is a little more LeBron than most reviewers. Traction, believe it or not, was not an issue except on supremely dusty courts — and 24 Hour Fitness had some on days I tested. The pattern isn’t the best, but it worked. Maybe the softer translucent rubber just stuck better than the solid. The nubs that stick out from the diamond pattern compressed and acted like a brush, back and forth, gripping the floor. The pattern has enough angles to it that it almost works like a herringbone, just extremely spread out. It isn’t on Rose 7 or Kyrie 2 level, but again, the only slipping I had was turning corners when the floor was way nasty — even the JC2 had issues those days.

Outdoors? Maybe for the solid outsole; the translucent here has already started wearing just from indoor courts, especially around the edges. 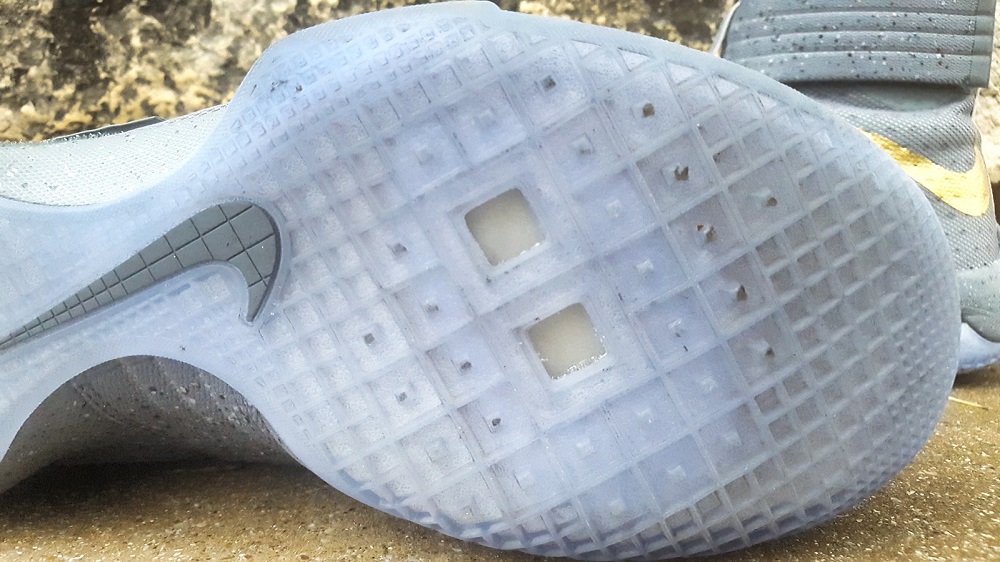 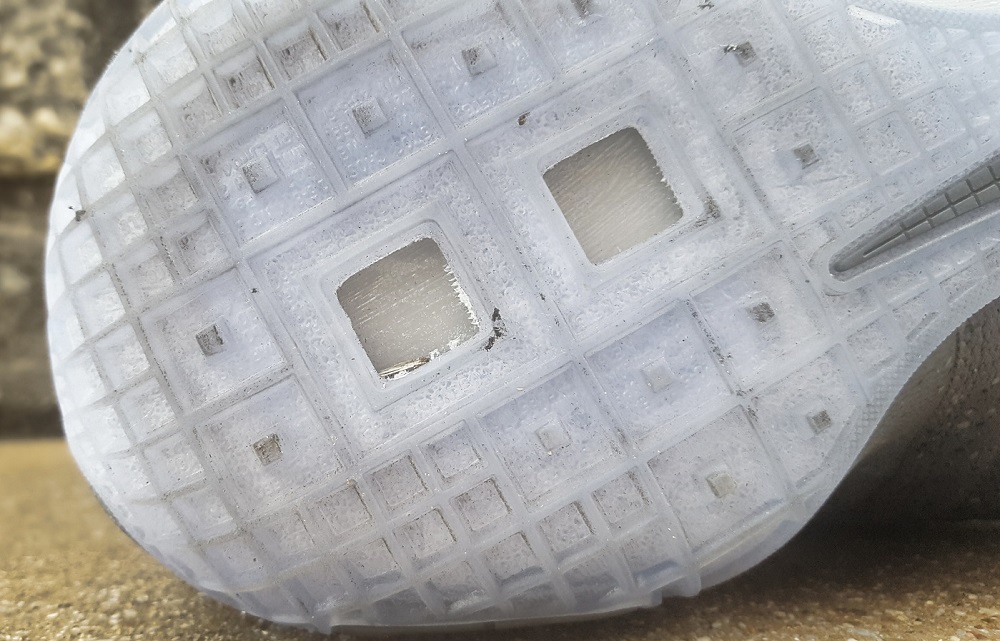 CUSHIONING – Well, it says Zoom. You can see the units in the windows, and you can see the outline in the pics above of how large the unit is, but that is about as far as the Zoom goes. After the excellent throwback Zoom performance of the KD9 and the Hyperdunk 2016, the Soldier X, with its huge bags underfoot (you can see a deconstruction of the shoe here — the heel Zoom unit is thick), should have been a bouncy and responsive beast. It ain’t. Dead is the nicest thing to say about the midsole, and this from a reviewer who puts a little extra landing in the jumps. I have worn the Soldier for two solid weeks, three nights a week, and there is not even a compression wrinkle in the Phylon.

However, there was no pain or shock when jumping or landing; the midsole was dead, but it absorbed the impact. The lack of bounce also contributed to a major plus on the Soldier X: response. With no sinking, the next steps were quick with no delay. Stability was also better because of the solid midsole, but more on that shortly. 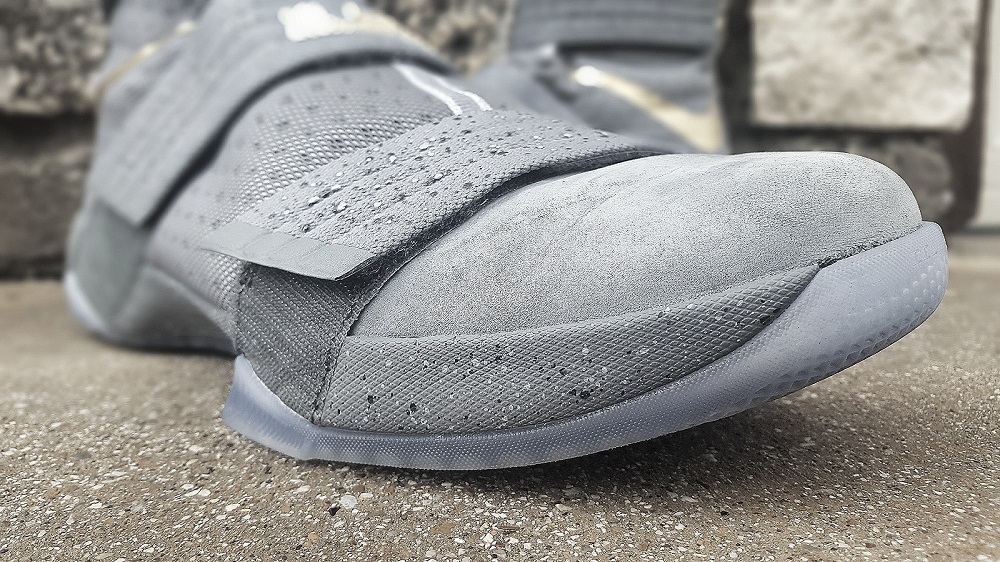 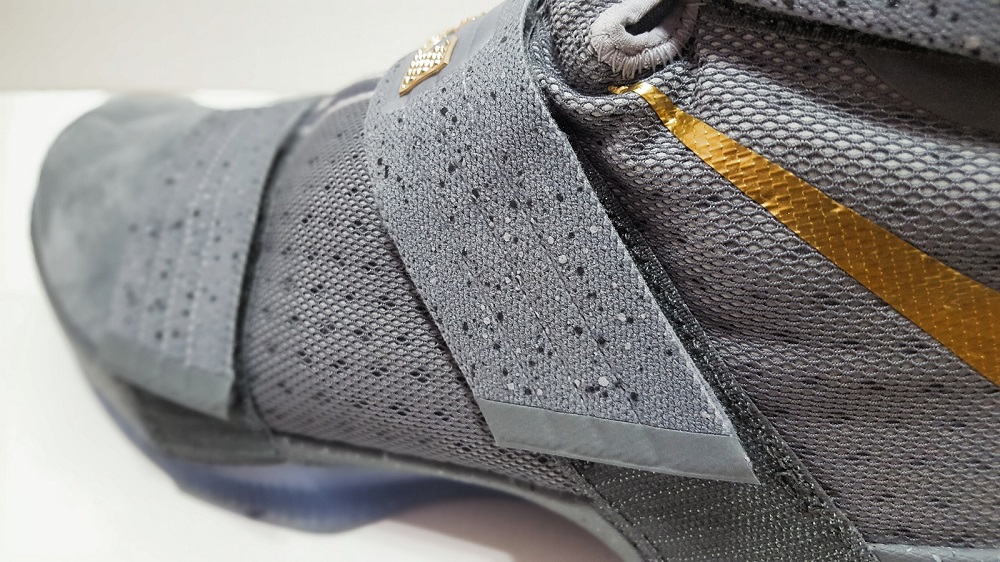 MATERIALS – The best thing about the Soldier X, at least this version (SFG PE), is the toebox. Grey nubuck covers the toe and it is niiiice. Yeah, it wrinkles and creases, but it’s supposed to — that’s what makes the shoe flexible and transition smoothly. The regular versions have the same mesh and foam materials as the rest of the upper, and those ain’t bad either. The base is perforated (has holes in it) thick foam covered by a performance mesh and it is comfy. Flexibility is key with the Soldier X, where as the LeBron XIII was stiff and supportive. The high collar has huge pads around the ankle and heel for a snug fit, and that really helps the lockdown with no laces. Overall, if you hated the Posite pieces and the stiff areas of the LeBron XIII, the Soldier X is the answer. 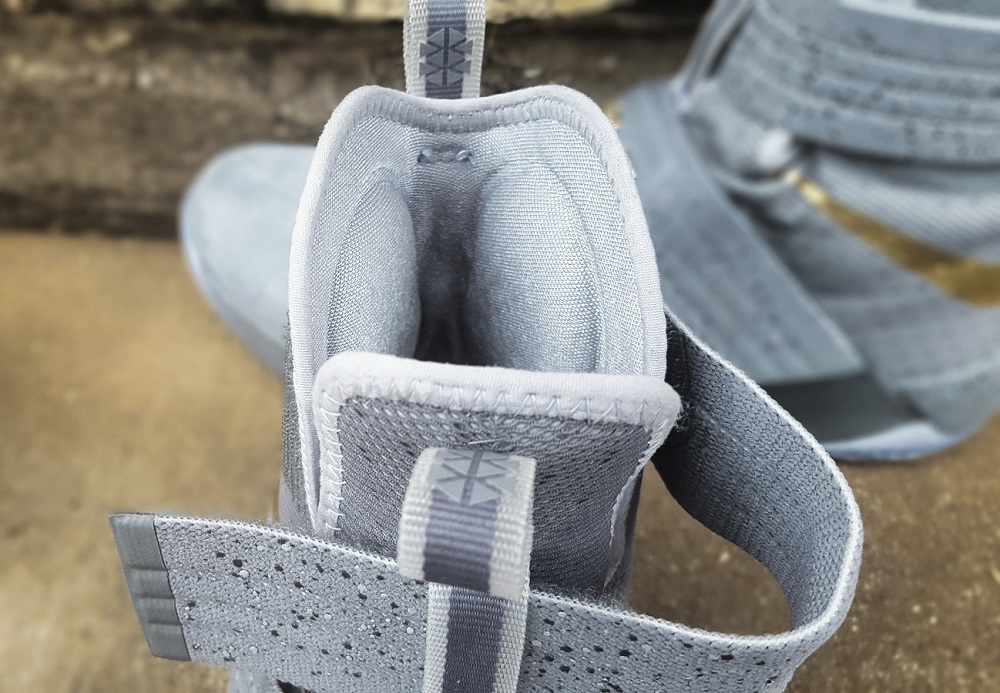 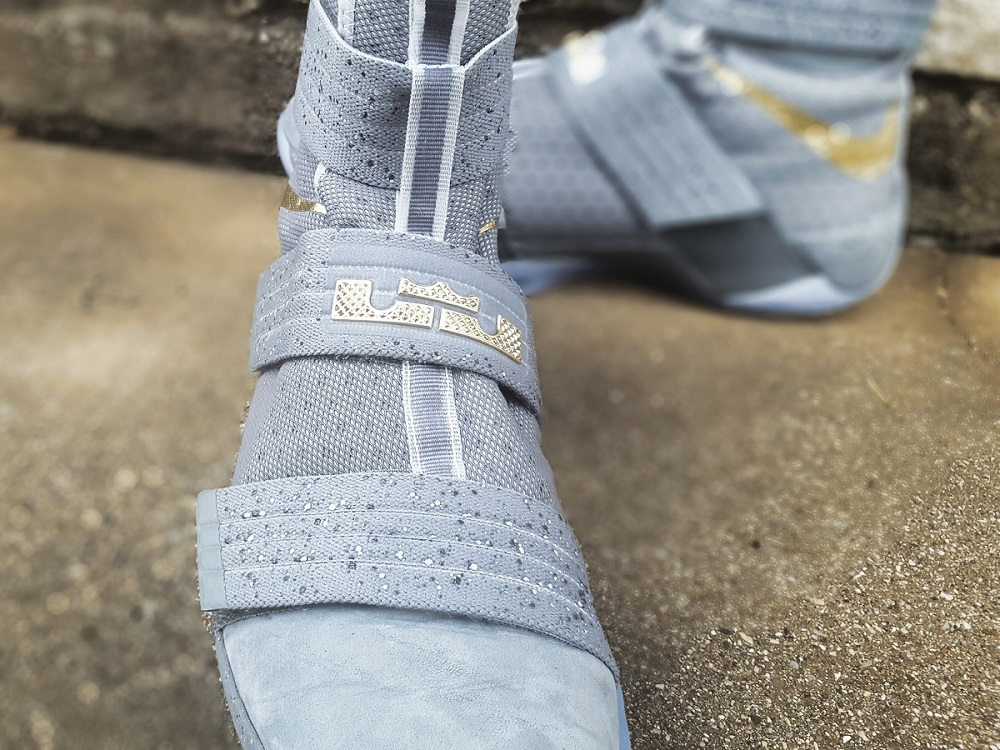 FIT – Another strong point, which is extremely surprising, given that there are absolutely no laces. Getting your foot in the shoe is the real task, just like the KD9, but once in, the sculpting and interior padding form around the foot. The last is contoured to run right with the foot, so there is minimal dead space. The straps tighten nicely around the ankle to stabilize the roll over and the middle strap pulls the foot straight into the heel, although if it would have been a wrap-over (loop through a strap and pull back over, like the LeBron V), the lockdown would have been even better. The forefoot strap is nothing but decoration, like chrome wheels on a Corvette — not needed, but looks good.

Stay true to size. I got these in an 11 because that was my KD9 size, and they are slightly long, but double socking made them perfect. If I had gotten my normal 10.5 they would have been perfect. 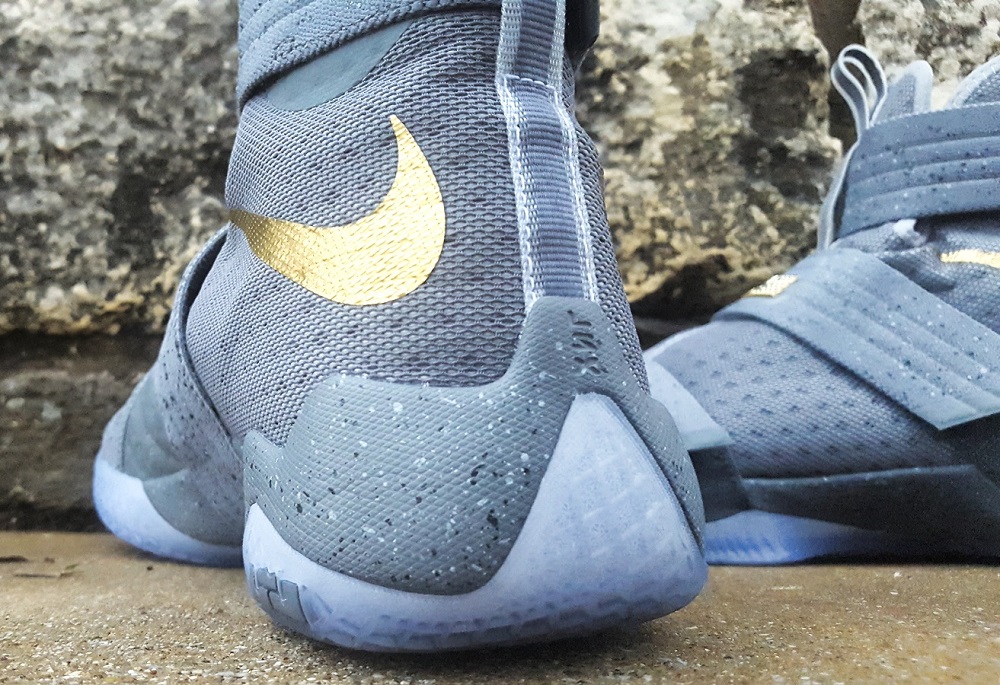 SUPPORT – Annnnd, you know it isn’t a LeBron game shoe if it isn’t supportive, and the Soldier X is plenty supportive. Again, with no laces, one would think the shoe would feel sloppy and therefore allow movement and kill your security. Not so. The internal structures, padding, and molding put the shoe right with the foot, so when strapped in, there is very little movement side-to-side or front-to-back. The heel counter runs about halfway up the back of the foot and really isn’t very solid; however, with the ankle strap locking in that area and the midfoot pulling down and back, the ride is low and a hard counter isn’t really needed.

The midsole cuts extremely narrow under the arch, like the Jordan XX9, and would be a rollover problem if the forefoot outriggers were small. They aren’t; they are some of the most pronounced ever made and keep the foot stable on hard cuts and spot-ups (and that’s good since the strap is useless? Oh, did I mention that already?). The heel area is slightly rounded on the sole but still wide enough to not be tippy.

Under the arch, there is an internal shank behind the Swoosh. It’s small and focused, just a square area right under the arch. No worries, because the Phylon midsole is sculpted under the foot and provides plenty of help. 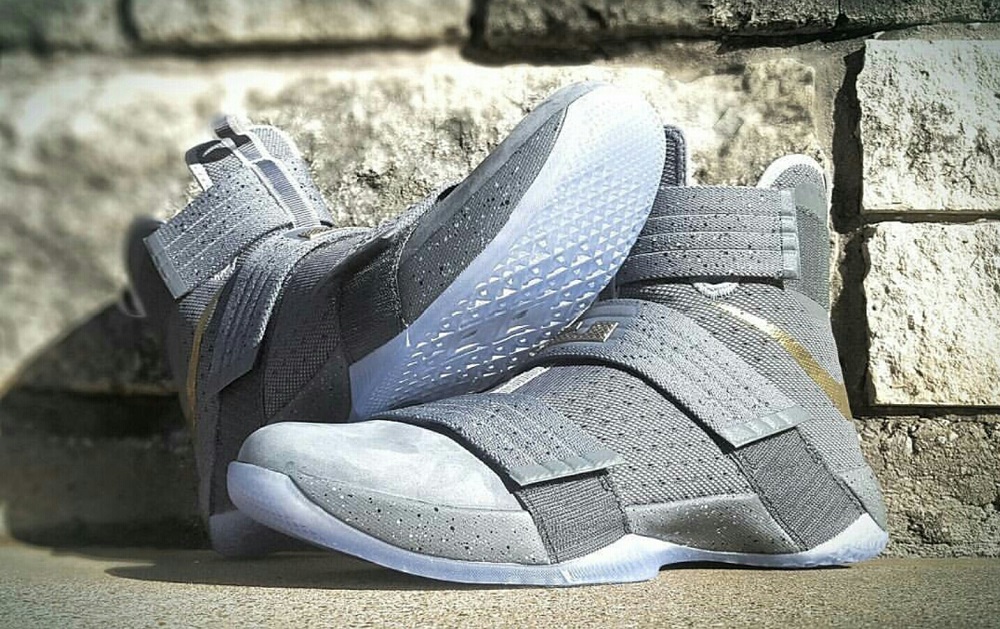 OVERALL – As criticized as the Nike Zoom LeBron Soldier X is, overall, it isn’t a bad shoe — pretty good, actually, to this reviewer. Sure, the Zoom could be better, and the strap system could use a little tweak, but overall, solid. If you are a bigger player, or play big, or are big for your size (see the buzzword?!) the Soldier X may be exactly what you are looking for — solid midsole and support, good fit, durable materials, and traction (at least on the translucent pair, softer rubber) is good on all but the nastiest courts.

And aesthetically? Normally reviews don’t talk about it, but this one will. The “Can it be worn casually?” question always comes up, and yes, any shoe can be worn casually. I think these look sick from a design standpoint, and yeah, they rise a little high, but that’s part of the fun — taking a shoe meant for courts and making it straight street. Be creative and let it flow. This is a shoe that is still getting tons of love from Nike with Team Bank colorways all over Eastbay (and on the feet of NBA and college players) and new colorways from dropping almost every week.

Is the Soldier X a top pick of the year? No, not really, but it is in that “almost great” category so many shoes are in these days, which is not a bad thing. Just know what your style is and what your needs are going into the purchase. The reason multiple weartesters do reviews of the same shoe is because we all play differently, so keep that in mind. Don’t give yourself Westbrook abilities in a Demarcus Cousins body. Be honest, have fun, and play. 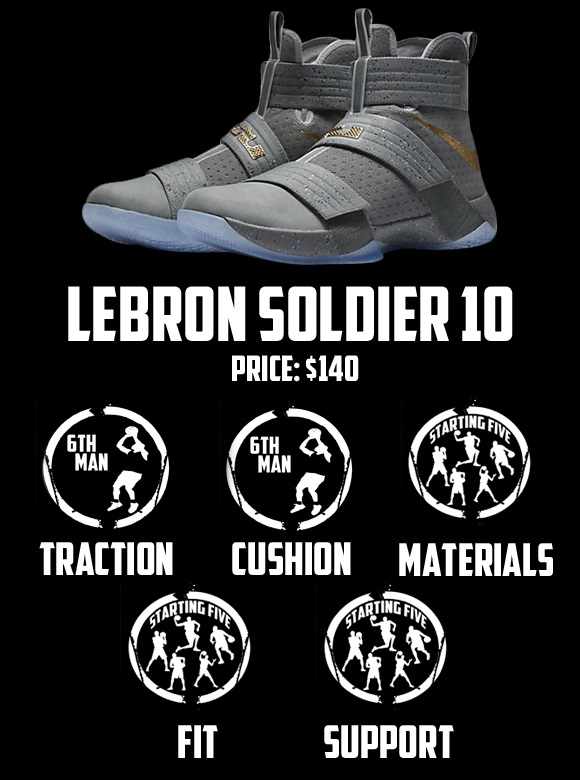