Affordable signature shoes are all the craze as of late. However, being affordable doesn’t mean they’re the next big thing. Here’s our official Nike PG1 Performance Review.

Traction – The Nike PG1 features an interesting pattern that will serve you well on-court. This particular version of the shoe features translucent rubber, and while it’s better than what Nike Basketball has put out in the past, it still isn’t the best option. Why does Nike insist on using clear rubber? It’s mostly to showcase the technology within the shoe. However, upcoming colorways of the PG1 feature solid rubber — what I’d recommend over the translucent options — while highlighting the cushion within the midsole by changing the color of the rubber in that particular section. I believe that is the best route and I’m surprised Nike hasn’t done it sooner with so many complaints about the lack of tackiness its translucent rubber offers.

The good news is that the pattern here really helps the rubber compound out and dust doesn’t stick to the pattern much. A quick wipe every so often will do the outsole good, and I’m almost positive that the solid rubber options will far exceed this version on-court.

Cushion – Forefoot bottom loaded Zoom Air is what is offered in the PG1. This setup is for those that want a more responsive ride for greater reaction speed. You won’t sink into the cushion and you won’t feel it bounce back as you would if it were directly underfoot, but it gets the job done for the most part. At the heel it’s just Phylon so nothing special there. Some may feel the setup is a bit lackluster if they’re expecting an abundant amount of cushion, but if you are more into court feel then this will prove to be a worthy setup.

Materials – This is one of the best material options we’ve had from Nike Basketball in a long time. It offers a little bit of everything, but not in a way that would make the shoe feel awkward or cluttered with tons of gimmicky materials.

The forefoot is free feeling with the open mesh and it’s protected by a layer of fuse in the high wear areas. This is great for players that stay on their toes and do not enjoy breaking in shoes. Meanwhile, the rear panel, on this colorway, is made of nubuck and it feels like the good ‘ol days when nubucks and leathers were being used to construct a sneaker. The overall build feels good, looks good, and plays well. Can’t really ask for much more than that. Materials and fit on the Nike PG1 are my favorite aspects of the sneaker. Speaking of fit…

Fit – The PG1 fits true to size. However, they are very snug — just the way I like it. The overall fit reminds me a bit of the Zoom Kobe 5 — one of the best fitting shoes I’ve ever worn — especially at the forefoot. And that’s before I even adjusted the strap. If you’re a wide footer then you may want to go up 1/2 size as the one-piece construction doesn’t offer much stretch once they’re on your foot.

Lockdown is incredible. The midfoot feels perfectly secure and there are only four lace loops. That one-piece bootie construction is so snug that it keeps your foot from shifting while in motion and the lacing just ensures your foot stays firmly locked down onto the footbed. Then we have the strap. I admit, it looks useless, but it works. My first few runs in the shoe I never even bothered tightening it as the shoe felt good as-is, but when I finally decided to mess around with the strap the forefoot containment went from really good to really awesome.

Support – Most perceive low top shoes to be less supportive than a mid or high, but that isn’t the case — especially not with the PG1.

The traditional support features are in place and work moderately well but, it’s the shoe’s midsole sculpting that is doing most of the heavy lifting. This midsole cups your foot and it’s something I feel is very beneficial for players. It’s a foolproof method to ensure your foot and the footbed are one while wearing the shoe. Feeling separate from your footwear will cause sloppy movement and will eventually result in an injury if you land on someone’s foot. Being contained within the upper and the midsole together provides you with the feeling that you’re not just wearing a shoe, but that the shoe is part of you. Yes, the midsole and outsole are rounded, which is strange, so they look like they’d be unstable. For whatever reason, that is not how they play.

Overall – I’m not going to say the Nike PG1 is the best shoe of the year. Nor would I say it’s one of Nike’s best hoop shoes ever. I will say that the Nike PG1 is very good if you’re looking for a shoe that feels like an extension of your foot without breaking the bank.

Two years ago this would have been a shoe that retailed for $125-$140, but with the competition creeping up quickly, it comes in at a very reasonable $110. Yes, there are other shoes from other brands that will offer you a little bit more in the cushion department, but the fit and containment here are key features that will benefit those looking for something that will allow them to play their game without restriction. Don’t waste your time with the translucent soled versions either — just go for the solid rubber options and avoid any potential traction issues.

Nike’s PG1 is a perfect blend of new and old. The materials offered will remind you of the past but won’t leave you feeling as if they’re stuck in the past. It makes me excited to see what Nike does in the future. 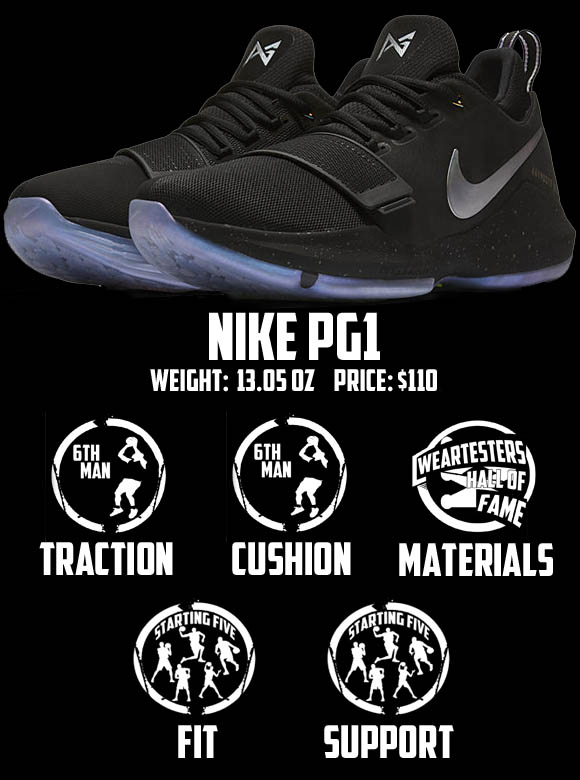