After weeks of testing, the Nike LeBron 15 Performance Review is here.

You Can Find the Nike LeBron 15 Available Now at Eastbay.com

Traction was solid for the most part. You can feel the triangle pattern bite and grip the court really well from a linear standpoint. Unfortunately, laterally I can’t say the same. The way the pattern is implemented seems to be straight across the surface. If some portions of the pattern were turned a bit I feel lateral coverage would’ve had that same bite that it offers linearly.

While I did play in a pair (for a very short time) that featured clear soles, the court I had played on was one of the most pristine surfaces I’ve had the pleasure of encountering. To be safe, rather than sorry, I’d opt for solid rubber. I know there are some killer colorways releasing that use translucent rubber that will be more enticing than some of the offerings that use solid rubber, but (there’s always a but) just keep in mind that if my pair with solid rubber didn’t offer as much bite laterally as it could have, imagine what it’d be like on a “normal” surface and the translucent rubber outsole.

I would not recommend playing in the LeBron 15 outdoors. Exposed Air units almost always pop once the outsole grinds down to the cushion’s surface and the rubber used here is soft, so it’ll likely happen sooner rather than later.

Beast mode! If you’re a cushion-above-all-else type of player then you’ll love these. The bounce and feedback felt from the Zoom units is incredible. This isn’t the first time this type of cushion has been utilized in a LeBron model (the last time was the LeBron 10) but articulation is present this time around so overall mobility has greatly increased.

Is the setup perfect? While it’s as close as it’s ever been, it still has some issues. Lateral stability — while a bit better than the LBJ10 due to wrapping the front portion of the Air unit in Phylon — could benefit from the implementation of an actual outrigger. I’m not sure why there isn’t a true outrigger on a shoe that rides on a platform made of Air, but that’s what we’ve got to work with here.

If you’re a linear player, like LeBron, then you shouldn’t have many issues with stability and support. However, if you move laterally often then you’ll likely feel the instability and it’ll hinder your on court performance. It caused me to hesitate instead of moving as I normally would around the court.

I believe the tooling could be the cause of LeBron’s recent ankle issues. While he usually sprints from one end of the floor to the other, there are times when he’ll move laterally. The tippy nature of the LeBron 15s tooling will be loud and clear when someone moves laterally in them — and you can see LeBron’s body jerk a bit to recover.

A wider setup or a larger outrigger could likely resolve the issues I’ve been experiencing. I hope we see something on the LeBron 16 that adds lateral stability while retaining all of the awesomeness that is Max Zoom Air.

Some areas of the knit are thicker than others while high wear areas are glued a bit for durability. Once on-foot I felt comfortable and secure, and if you’ve worn Flyknit hoop shoes before you’ll feel the evolution throughout the years.

I went down half size from my true size in the LeBron 15 due to the materials and build of the upper. One piece uppers can be tricky to get just right and I’d rather have them be a little snug than a bit too loose — especially with the tooling setup the way it is. Trying them on in-store is the best option, and make sure to bring your brace or orthotics with you to ensure everything works.

Lockdown was surprisingly nice from heel to toe. While the lacing structure relies solely on Flywire, it did its job rather well. The top “eyelet” or Flywire cable draws the heel into the rear section of the shoe nicely while additional heel padding takes care of the rest.

Once you’re in the LeBron 15 and laced up, especially if you opt for going down half size, you’ll be locked in and ready to go.

Support in the LeBron 15 is a bit lackluster due to the tooling setup. Traditional support features like a torsional midfoot shank and TPU heel counter are all in place and work well. Hwoever, the midsole and outsole lack a wide enough base and it really hurt the lateral stability and overall support. Again, if you’re a linear player then you should be fine. If you move around laterally then you may have the same experience I had in them.

I love pieces of the LeBron 15. Materials and fit are highlights, and the cushion is the best Nike has offered in years. Stability made them a bit concerning for me while on the floor and I never ended up feeling as comfortable as I wanted to be.

If you’re willing to sacrifice lateral stability in lieu of cushion then you’ll enjoy the LeBron 15 immensely. If you’re a low profile player that roams the floor and curls off screens to get an open look at the basket then you may want something a bit different. 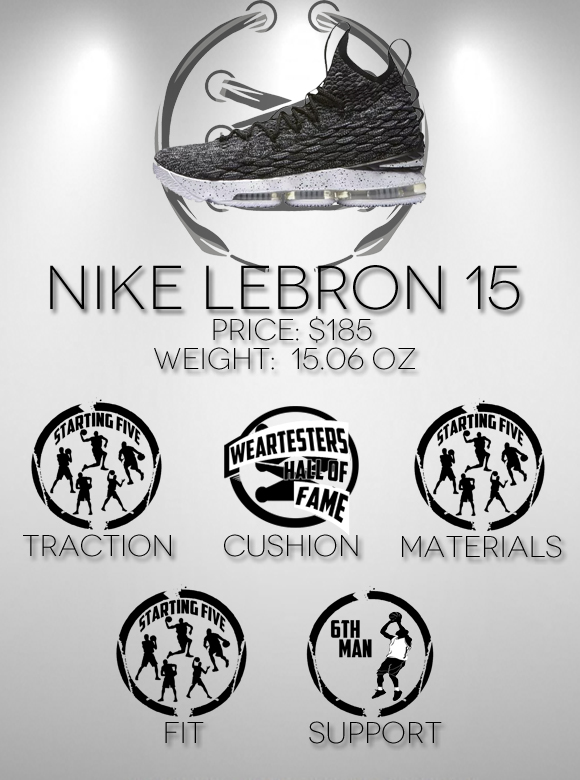