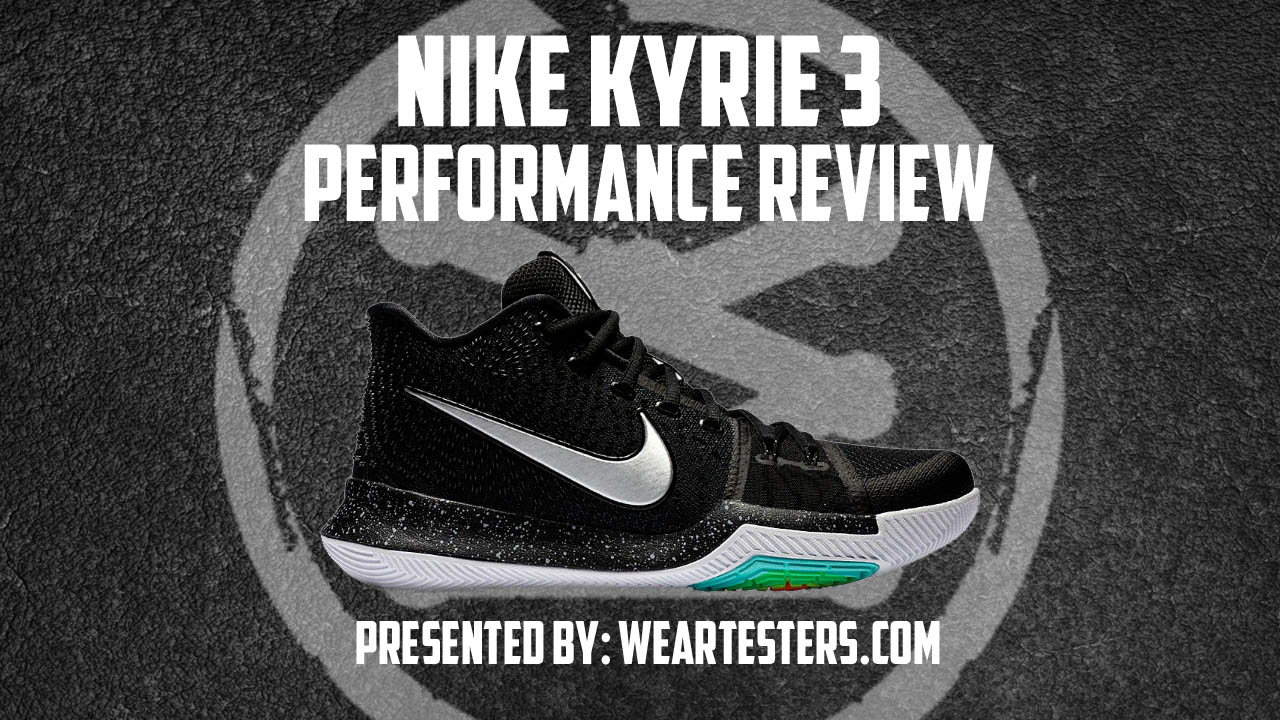 The improvements made between the Kyrie 2 and Kyrie 3 aren’t huge, but they’re important.

Traction – The Nike Kyrie 2 offered some of the best traction available in 2016, and Nike continues that trend with the Kyrie 3. Aggressive herringbone is featured from heel to toe along with two multi-directional pods. These pods are intended to allow the wearer to grip the court while swiftly changing direction while the herringbone covers linear movements.

Near perfection is the simplest way to describe the setup and while most would applaud a brand for using such a pattern, it only has me scratching my head wondering why this isn’t just how traction is — as in, all the time. Why would you try to tell a story down below where very few will see it when you can just use a setup like this. A setup that works. This isn’t me calling out one brand in particular either. This is me legitimately wondering why a setup similar to this isn’t just a given when it comes to basketball footwear. Yes, there are a few exceptions to the rule — blade traction typically works well. As do nubs when thick enough and places in a circular motion (Kyrie 2). But this is it right here. This sh*t just works. We’re talking about traction — not stories, traction. We’re talking about traction. Just do this. Every time. Trust me. Nobody will be mad at that.

Is this particular setup flawless? No. The area that looks like an “X” placed between the pods takes a little getting used to — especially in the middle. That’s where the tooling “peaks” because it’s rounded. It isn’t aggressive like the rest of the outsole, but I think that was the intent. It’s almost like a pivot point dead center within the tooling. It’s just a little weird when you first put them on, but it gets less noticeable the more you play. The only thing you will definitely notice is that you’re not slipping on-court.

Additionally, dusty courts will require you to wipe the soles clean periodically. But that doesn’t mean that the traction is failing. Your court is. Or the cleaning crew. However you choose to look at it.

Cushion – This is where brand snobs will get mad at me because I don’t sugar coat sh*t. I just tell it like it is. The Kyrie 3 has no cushion aside from the heel Zoom Air unit. Not sure why anyone would be mad at me for that. I didn’t make the shoe, I’m just reviewing it.

Court feel is the primary focus here, court feel at any cost. There are players that enjoy this type of setup, so if that happens to be you, then you’ll likely enjoy these a lot. The shoe’s heel Zoom unit is there in the event that you crash down on your heel after a rebound, jump-stop, landing etc. I rebound more often than I should — for my size — and the cushion wasn’t a major issue. Jump-stops were. I’ll blame that partially on the cushion setup and partially on my aging body. But, like I mentioned, if you require court feel then this is your shoe.

On a personal note, I do feel that court feel and cushion can be met with compromise. Weather it comes in the form of Cushlon, Podulon, Podulite, Lunarlon, and even the OG of “low profile responsive cushion made for a Guard” Zoom Air. This is like OD-ing on court feel to me. Yes, you’ll save yourself a millisecond of time as the cushion under foot isn’t there to suck a tiny bit of your energy up while in motion. Does that millisecond actually matter? No, not really.

Materials – The main difference between the Kyrie 2 and 3 comes from the materials — and I really love the materials. Mesh is the primary feature at the toe and midfoot to heel. Meanwhile the flex zone at the forefoot is a foam reinforced with Flywire. This setup is far greater than the one we received in the Kyrie 2 — fuse shell with mesh glued on top of it — and it actually made the tooling setup a bit more enjoyable on-court. Everything was able to flex and move properly instead of having the materials and tooling work against each other.

Materials can be very hit or miss depending on player preference, but they’re an essential part of a shoe’s build. The materials are the shoe’s build. Without it you’re merely wearing sandals.

While mesh is the main material, Nike added fuse to high-wear areas for extra strength and durability. Along the entire rear section of the upper we have a rubber — Kurim — overlay that acts as a three dimensional design along with a layer of protection against abrasions. Again, I love this setup and feel it aids in the minimalist tooling they have built upon for this particular model.

Fit – The Nike Kyrie 3 fits true to size. Wide footers may find them to be a bit on the narrow side so going up 1/2 size may be required for some.

The lockdown fit my feet perfectly from heel to forefoot. The throat of the shoe is simple, but extremely effective. While the heel is nice and secure and the ankle structure allows for a pain-free fit. There isn’t much else to say. They fit TTS and I felt locked in the entire time without a single issue. Well, a minor nitpick would be the laces. They’re so damn long. Nitpick complete.

Support – The support features are basic throughout. An internal shank is at the midfoot for some minor torsional support while the heel has an internal heel counter. Tooling isn’t flat, by any means, but it’s wide and cradles your foot well. Having the midsole and outsole rounded definitely takes some getting used to, but once you’ve gotten used to it you’re playing as you would in any other shoe. Materials work well and without too much structure.

Except for the toe. Holy hell they fused the sh*t out of the tip of the toe. Why? I have no idea. You can use fuse without it being so hard. Hopefully they try that out with the four because ramming your toe up there was really enjoyable — sarcasm.

Overall – Surprisingly enough, I enjoyed playing in the Kyrie 3. The Kyrie 2 had great traction along with lockdown and containment, but it wasn’t enjoyable for me. These just felt more complete. More…thought out? Not sure how to describe it exactly. All I know is that they played well for what they offer. I definitely need more cushion as my knees absolutely hate me the following day after wearing these, but other than that I think the shoe is pretty solid.

It really comes down to what performance attribute you have as your top priority. If cushion is your main need then you should already know what that means for you and the Kyrie 3. But if court feel and traction are your only concerns then these might be your new best friend. 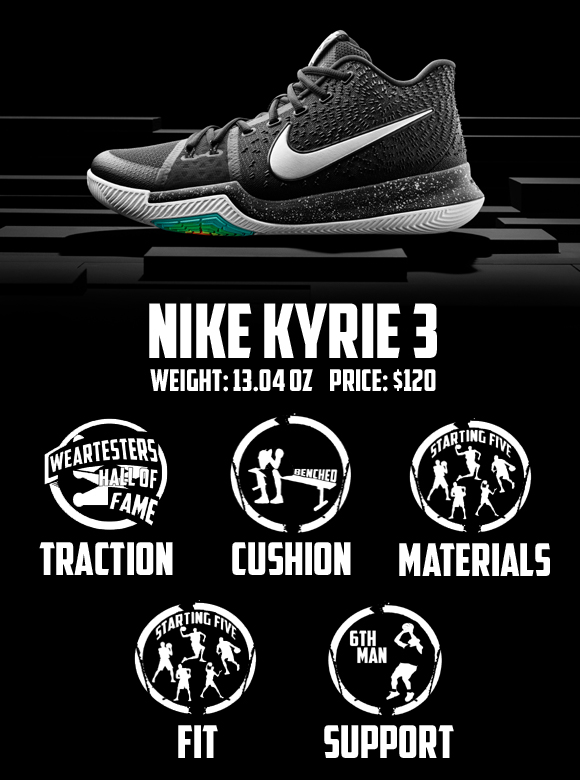