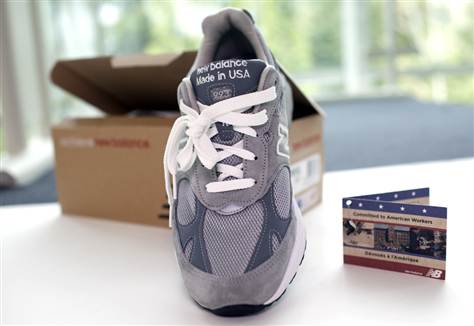 Recently, the brand has again come under scruple of the Federal Trade Commission. Not 100%, not 90%, but only “about 70% of the value of its U.S. made shoes reflect domestic content and labor” (Aeppel, WSJ). The U.S. Federal Trade Commission states that products must be ‘all or virtually all” made in this country to qualify as ‘Made in the U.S.A..’ Few know that the FTC has been in continuous contention with New Balance since 1990, when the FTC brought an enforcement action against the brand and their ‘Made in the U.S.A.’ claims. The FTC has since dropped action against the brand.

While New Balance does not hide their 70% threshold. However, that percentage simply does not meet the standards set by the FTC. States like California require that 100% of the product must be made in the U.S.A. to qualify for the label.

“We look at the New Balance shoe case as clear proof that the federal law is not being enforced,” says Richard Holober, executive director of the Consumer Federation of California.

Via WSJ / Photo via MSNBC.