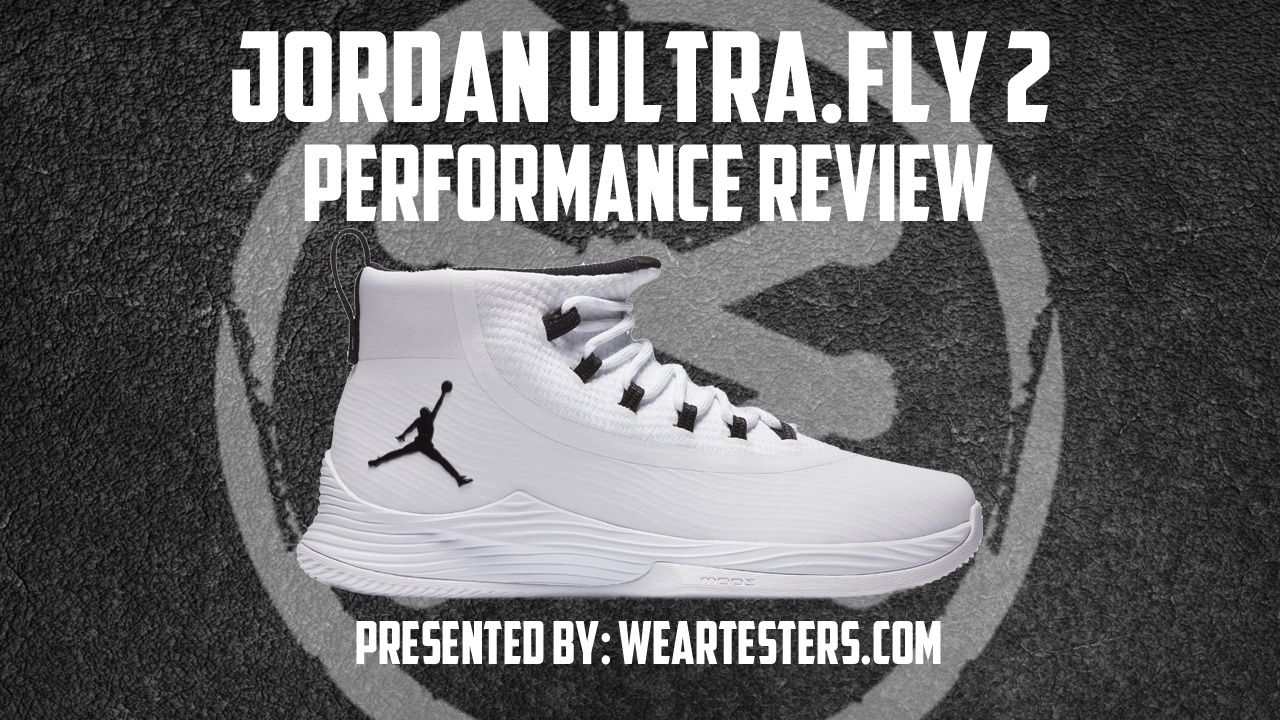 The Jordan Ultra.Fly 2 took everything the original Ultra.Fly was and threw it away.

The Jordan Ultra.Fly 2 is available now at Eastbay.com

Traction – I had a love/hate relationship with the traction. The pattern itself looks awesome, and it is — for the most part. However, dust collected quickly within the black portions of the outsole which resulted in an inconsistent feel at times. I’d be interested to see how much of a difference it would’ve made had the pattern been consistent throughout because the white sections gripped the floor without issue — dust or no dust. Again, it was mainly the black pods that needed regular on-court maintenance.

When things were gripping, the coverage was very close to being Hall of Fame level. When it wasn’t, it was frustrating. Outdoors, the outsole worked extremely well — a pleasant surprise. Will everyone experience what I experienced? I’m not sure. I can imagine the grip varying depending on the court condition; if you play on clean courts or outdoor surfaces then I wouldn’t worry too much. However, if your court needs to be refinished or is cleaned irregularly then you may be disappointed.

If I could have given the score half 6th Man and half Starting Five then I would have — I kept changing the score because the traction didn’t let me down regularly, which I feel is worthy of a Starting Five, but when it did let me down it was a huge let down.

Cushion – The Ultra.Fly 2 uses heel and forefoot Zoom Air. Yes, a shoe from Jordan Brand that retails for $125 features heel and forefoot cushion. Whoever has been holding onto the budget with an iron fist was either fired or has finally come to their senses. Welcome back to being part of the equation as far as value is concerned, Jordan Brand. It’s about damn time.

The Ultra.Fly 2 starts off feeling a bit heavy feeling underfoot. This is due to the fairly dense Phylon midsole used here. Despite being on the dense side, the foam did feel like it had some rebound once broken-in. This then allowed me to feel the Zoom Air that was installed within the forefoot of the shoe quite a bit.

On top of that, the tooling is rounded ever so slightly which caused the tooling to flex a bit with weight added — furthering the feeling of the Zoom located in the forefoot. Kyrie 2 and 3 — I’m giving you the People’s Eyebrow right now.

The heel Zoom unit is a poor excuse for Zoom Air as it’s one of those quarter-sized Hex Zoom units. However, it’s better than having nothing at all. As you can see from the image above, provided by FastPass.cn, the Hex unit is on the thicker side so not all is lost. When enough force is applied you can feel it and its doing what it’s supposed to — absorbing impact.

Would it have been better had it been the same size heel unit that was used in the Kyrie 3? Definitely. I’m just happy that Jordan Brand seems to be moving in the right direction again. Unless the next few models from Jordan Brand don’t feature heel cushion — then we’ll just chalk this model up as a fluke.

Materials – The upper of the Ultra.Fly 2 is an engineered knit that feels amazing on-foot. However, this is a one-piece construction upper so some might not enjoy the overall fit, but we’ll get into that in a bit. The knit used here on the stretchy side so lateral containment and support would greatly suffer had the designers not placed a TPU overlay on most of the shoe.

TPU overlays are not really my thing, but there are times when it’s done in a way where you don’t feel like you’re trying to play basketball in a rain boot. This is one of those times. I felt like I was wearing a knitted shoe but with the reinforcement of an upper constructed of TPU; it was a very nice blend between the two and it feel pretty well balanced. The materials function well, and they’re durable — only furthering the shoe’s overall value at its $125 price point.

Fit – The Jordan Ultra.Fly 2 runs true to size, but being a one-piece upper, they are not going to please everyone. Wide footers should try the shoe on before buying as the fit is a bit suffocating initially. Actually, the fit is always suffocating, but you get used to it.

Padding is abundant within the upper which makes the shoe feel comfortable despite it’s tight grasp to your feet. Once laced up you really aren’t going anywhere and I feel it’s one of the shoe’s better features once you’re adjusted.

The eyelets run all the way down to the footbed of the Ultra.Fly 2; they grab ahold of your foot and act like steel cables while the top eyelet draws your ankle and heel into the shoe to ensure they stays locked at all times.

Support – The support features one would expect to be in place are all here and accounted for. Lateral outrigger? Check. Dynamic lacing system? Check. Internal heel counter? Check.

A couple of features that set the Jordan Ultra.Fly 2 apart from the rest are the way the upper is constructed, allowing motion while still retaining the ability to properly contain and support during lateral movements, and the sculpted midsole. It looks like it’s just aesthetic but the way the midsole swoops up along the lateral midfoot and medial heel ensures that you and the footbed are one. It cradled my feet at all times and did not allow me to ever feel like I about to be ejected off of the shoe’s platform.

Overall – I’m really hoping the Jordan Ultra.Fly 2 isn’t a fluke and that this is just the beginning of Jordan Brand coming back to its senses. You can no longer get away with reducing tech and hiking up the prices on performance footwear. Not when every other brand is releasing shoes for under $150 that feature full-length cushion in addition to all the standard bells and whistles.

This is the first Jordan Brand performance model I’ve bought in a long time that doesn’t make me feel like I was ripped off. Well, these and the Air Jordan XXXI Low. The Ultra.Fly 2 is a bit heavy with a suffocating fit, but if you give it enough playing time you’ll find that it performs well and breaks in very nicely.

The Jordan Ultra.Fly 2 takes everything the original was and threw it away. Now this is a basketball shoe. 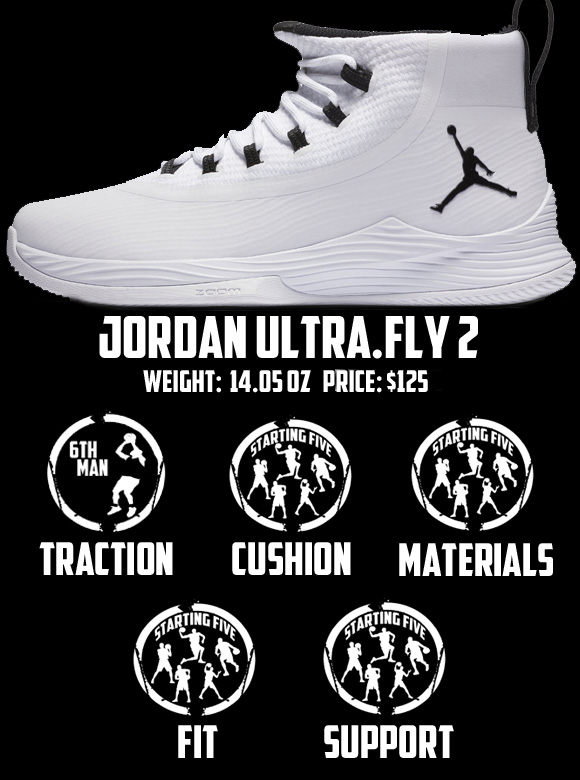