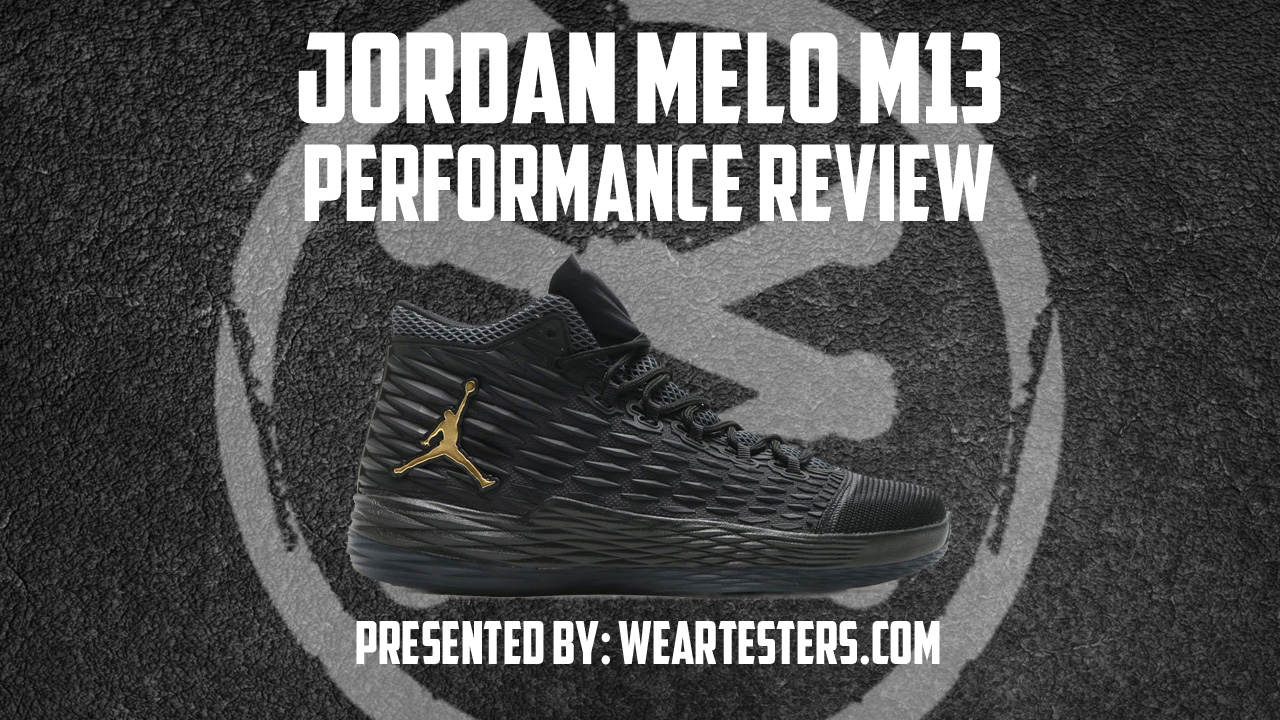 Thirteen?!?! Hard to believe Melo has been in the league as long as he has, but yes, here it is, his thirteenth signature from Jordan Brand. The Melo line was long thought of as the “luxury” sig, right below the Jordan model as far as materials and technology. How will the Melo M13 compare to the rest of the line? You know how we do… 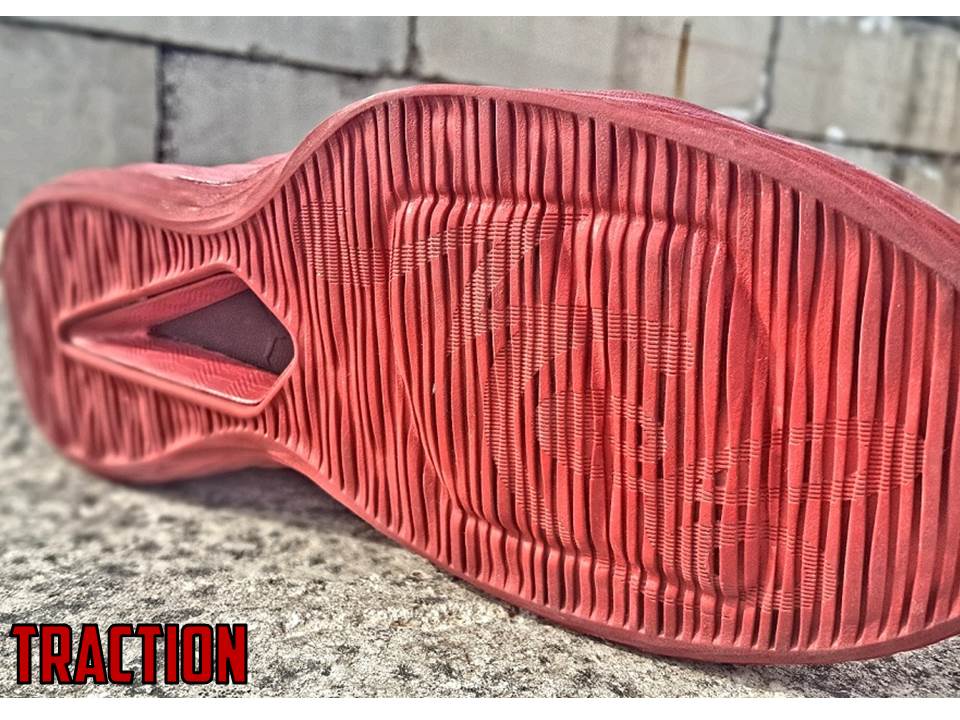 How do I say this? Oh, I know: not good. To start with, the pattern only has lines that run across, and nothing breaking up the pattern to give the shoe something to hold on to when playing laterally. These work decent on a really clean court, but for the normal courts most of you will play on, not so much.

Then JB added moguls to the Melo M13 sole pattern. Yeah, moguls — like on a snowy mountain and you ski down them. These are supposed to give the sole more of a cleated feel, to compress and give texture to the flat sole, and really, they don’t. The nubs end up compressing completely and then you get a flat sole with only horizontal parallel lines for traction. Again, if you play on NBA, college, or even well-kept high school courts you should be good. For the rest of us who play where we see a hoop, well, good luck — the next Winter Olympics is looking for skaters.

Outdoors, I don’t even know. The grooves are shallow and the rubber is not extremely hard or durable, so I wouldn’t recommend using the Melo M13 outdoors for very long. 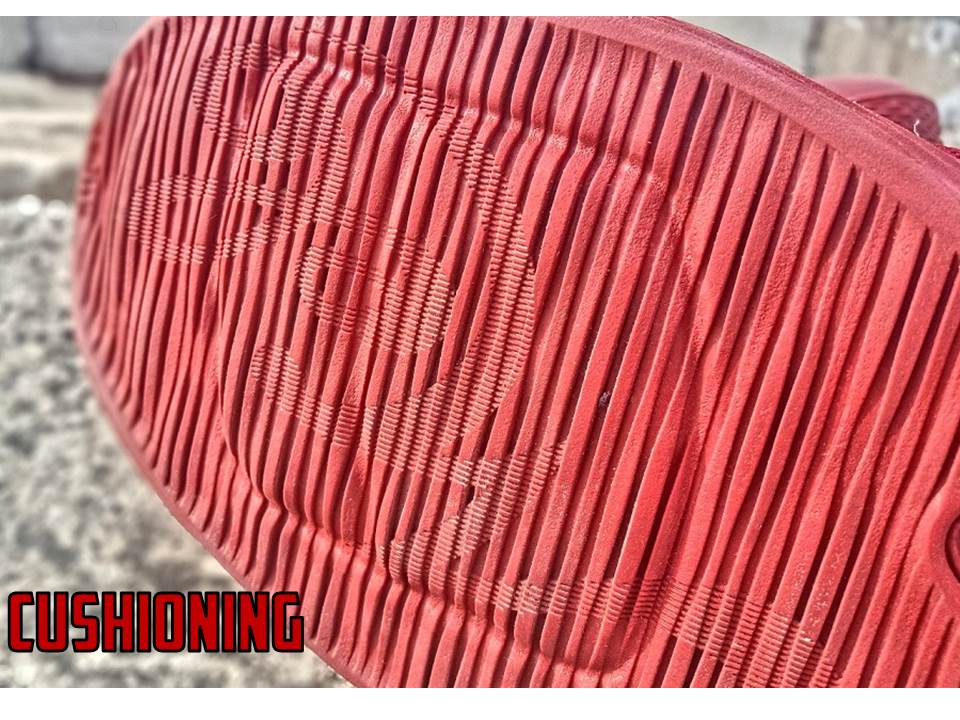 Jordan hit a massive home run with Unlocked Zoom in the XX8 and has since modified and evolved from there with some good iterations and some bad. The Melo M13 uses the Flight Speed system and Unlocked Zoom from the Jordan XX9, which rides lower and more stable than the original example. The forefoot is well cushioned and responsive with the Zoom pushing your foot back on compression. The nubs on the bottom give a weird sensation when added to the mix, adding even more compression under the ball of the foot for a more forgiving ride. Honestly, this is the XX9 forefoot because it feels exactly the same; it rides low with great impact protection and springs back to place quickly.

Jordan Brand decided with the Jordan XX9 that heel Air was not needed, so we were introduced to a cored-out section of foam in the heel of most of its shoes that year including the Super.Fly 2 and the Melo M11. Nothing has changed, as the M13 stays with the concept. Still a Phylon base, the heel area didn’t have any problems absorbing impact or taking force and was extremely stable on post-ups and hard plants. Foam done right does the job, as we have learned these past couple of years, and this Phylon is very close to correct. Cushioning is not the issue with the Melo M13. 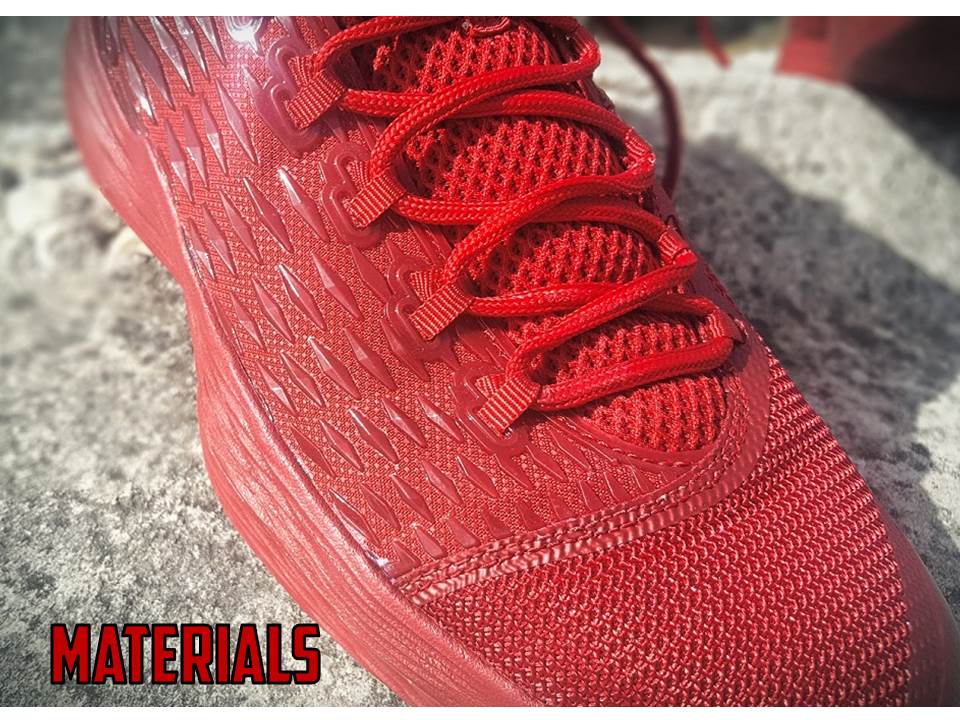 The Melo M13 uses a mesh upper with Kurim overlays around the lateral side and heel, and the mesh feels great on-foot. Soft and flexible, there are no hot spots at all and the upper forms right around your foot when laced. The mesh isn’t as soft as the KD9 heel or the Hyperdunk 2016, but for the focus of the Melo line, this version is better because it provide a little more structure. Of course, there is the fuse area over the toecap (for drag) and along the seams (for strength).

Not sure what the Kurim is for, other than design. The individual pieces aren’t connected in any way, so besides looks, the only thing it could possibly be for is to protect the mesh from side swipes. The tongue is regular open cell mesh for some breathability. A little leather stripe placed along the heel for Melo’s signature is actually a nice touch — JB should have just made the heel wrap completely out of that leather. 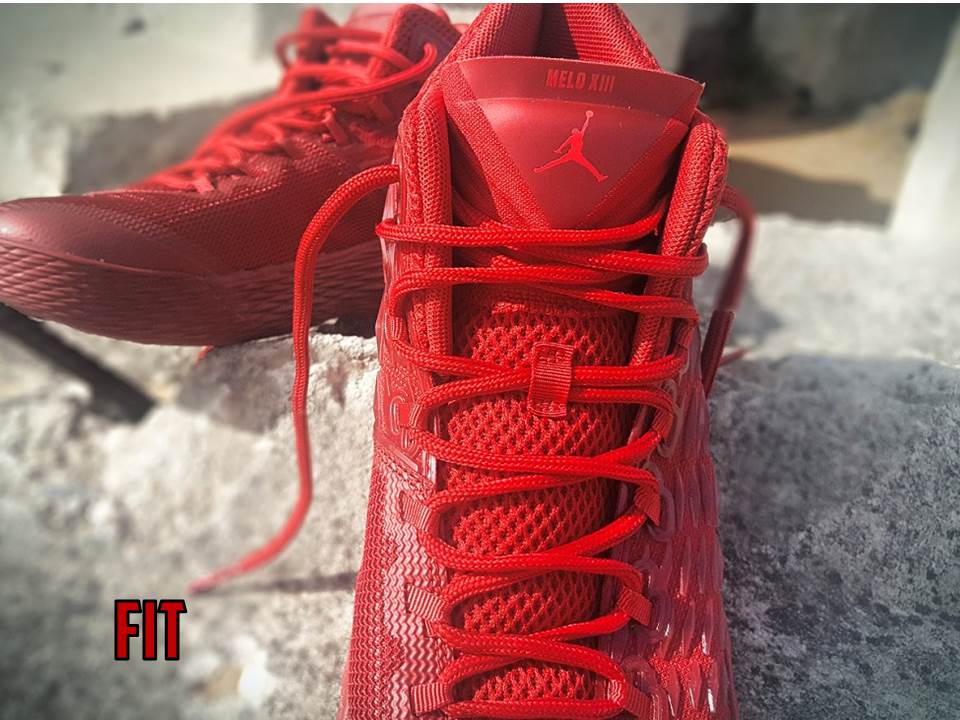 The fit of the Melo M13 is nothing special, which is perfect. There are five fit straps through the forefoot and midfoot and two regular lace holes on the ankle, along with an internal bootie/tongue system. Altogether, these allow the shoe to be laced however tight or loose you need (for me, extra tight). Once laced solid, there is no heel slip or midfoot movement to really complain about, at least before playing (more on that next).

Sizing is dead on; a size 10.5 fits just like a 10.5 should, about a thumb width in the length from the end of my big toe. There is very little dead space over the toes in the toebox, so some wiggle room is there but not enough to move the wife and kids in. Even without the ankle pillows from the M12, the heel is locked when laced tight — no pulling your foot out without loosening the laces in the Melo M13. 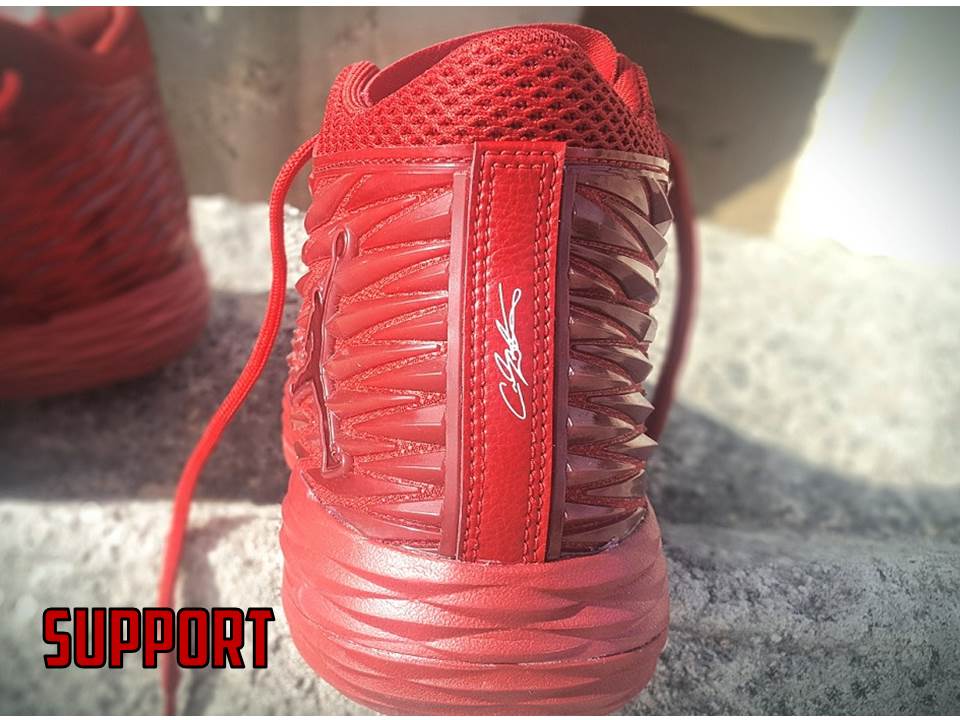 And here is another problem with the Melo M13. First, the heel counter. Do you see it? Can you find it? Me either, because there isn’t one. That can be a problem, especially if you like a little extra help on bad landings or post up moves. Maybe Melo liked that omission, I don’t know, but I don’t.

However, the midfoot is supported by the Flight Speed system and it does a great job, like always. The plate keeps the midfoot straight and solid while making the transition smooth and fluid.

Now for forefoot containment. Again, there is none. Maybe not none, but the foot sits right on top of the midsole, so no sidewall help. The mesh is soft with no overlays, so no upper help. The lacing straps are just nylon ties going into the footbed — a little help but not enough. My foot, when it wasn’t sliding from lack of traction, was all over the place inside the shoe while cutting and stopping. The first two things I need are traction and stability/support/containment, and the Melo was far behind in both, at least for my game. 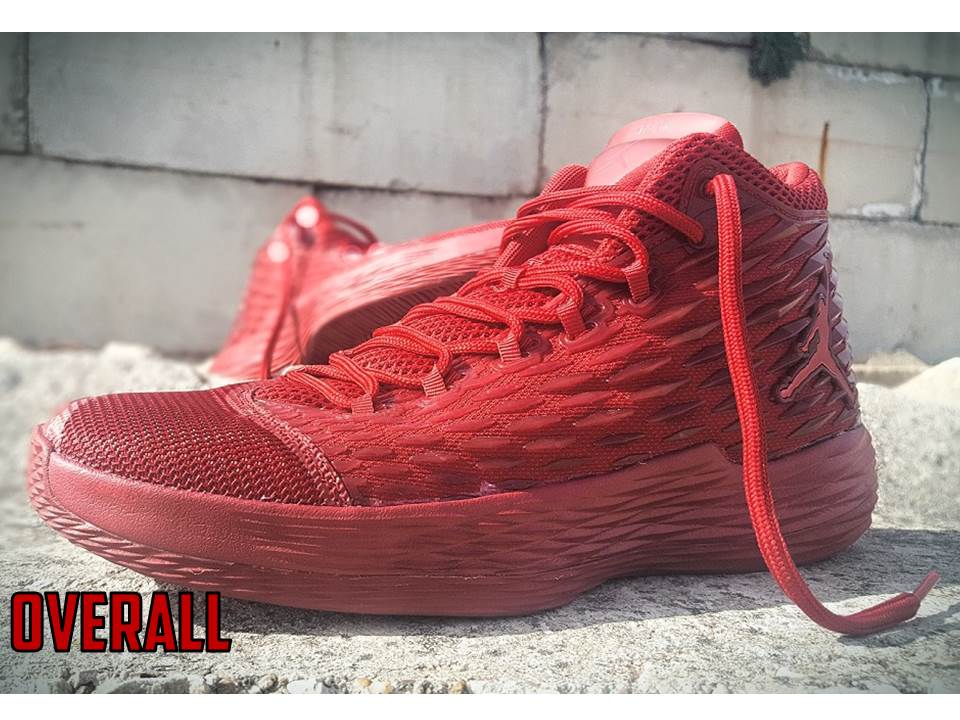 Nice try, but not quite. Felled by traction and support, the Melo M13 had potential. Cushioning was nice, even without heel Zoom. The materials were good, and aesthetically, I think it is one of the best Melo’s ever. That traction, though. Can’t do it. I hate, hate the feeling I get when I come off a screen and plant for a jumper and my lead foot keeps going. After that, it’s a guess whether the shoe will stop or not, and when it does, the upper can’t handle the torque, letting my foot roll over the footbed completely on some occasions.

If you are a stationary player, shooting endless 25 foot threes, or a real post that plants in the block for a 10 count, then the Melo M13 may be for you. If you are a dynamic player looking for movement and containment on hard cuts, nope, nada. The search continues for you. Much like Melo’s game, it seems the best years of his signature model are behind us as well. 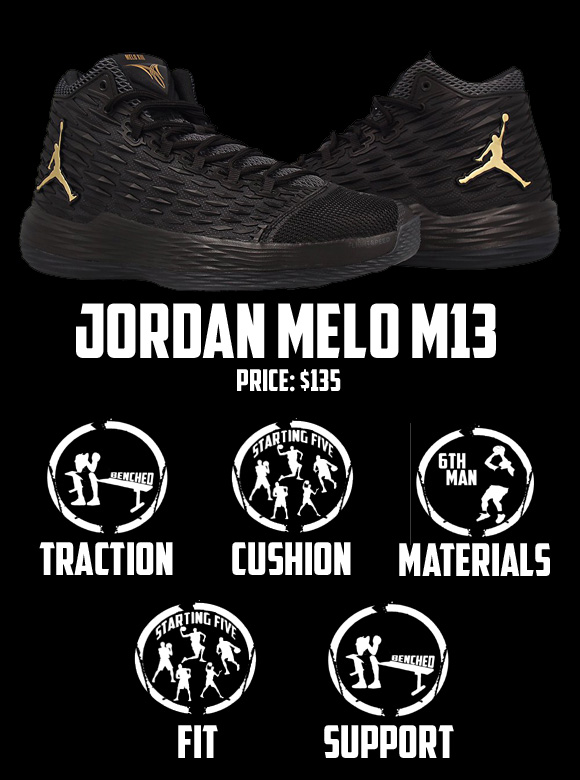