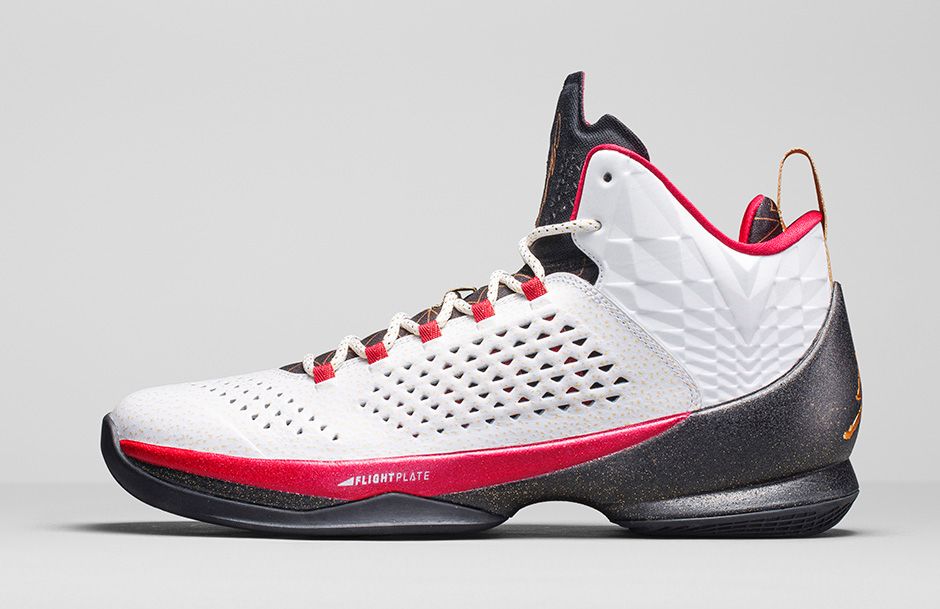 Return of the Product

Love, hate, or couldn’t care less, Carmelo Anthony never seems to be ignored. So far, his shoes have been a different story – but not because of performance, as most have been bangers on court, but because they aren’t retros of bygone eras. So we now have the Melo 11, and, well, let’s just get to it… 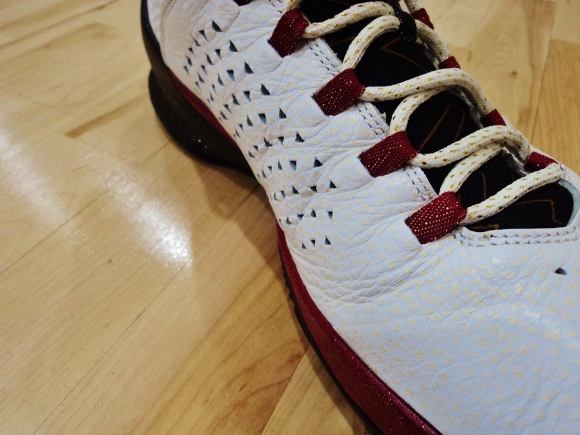 Materials – First things first, as Nightwing covered in his preview review, the Christmas colorway reviewed here (thanks, JB) is leather. Real. Genuine. Leather. Following on the materials used last year in the CP3.VII and Melo M10, the 11 comes again with the good stuff. It creases, it bends, it molds to your foot, and generally feels better, to me, than any material ever. If you don’t like creases look somewhere else, because these do crease, first wearing, and they look great doing it. The other colorways are synthetic and not as flexible at first but break in nicely after a few hours wearing. To me, the extra $10 is worth it, but up to you. 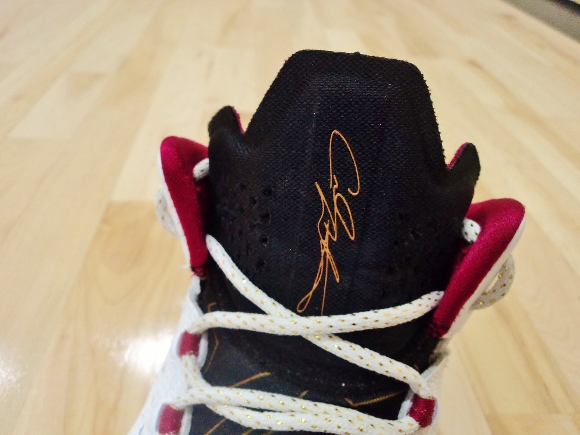 Fit – Dang near perfect. I have been extremely lucky this year testing as most companies have figured out the fit problem (BrandBlack, JB, Nike, Adidas for the most part – c’mon, Rose 5). For you readers who know my previous reviews from another site, I like NO MOVEMENT in my shoes when playing – heel, forefoot – nothing. I lace tight and hard. I didn’t have to with the M11 – even with the two last eyelets looser than normal I was comfortable and secure. I had a problem with the M10 and midfoot fit – I just could not get locked in completely. It seemed the “fingers” would loosen as I tried to pull tight, leaving some movement in the shoe. The M11 is cut narrower and more on a running-type last to lock in from step in and my foot was held in place on hard cuts and pullups and sliding on defense was no problem. The heel is made of a hard-shell synthetic almost Posite – like so there was the extra stiffness needed for security, but the shoe just felt good. For sizing, I always say try them on, as everyone is different, but I stayed true (10.5 in EVERYTHING) and the length gave me about a half inch (just like I like). 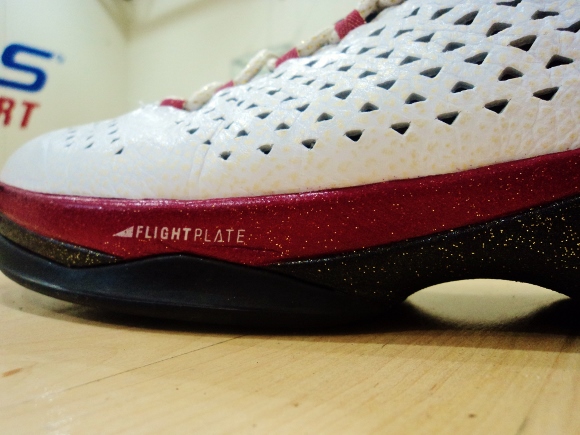 Cushioning – If you have heard of a shoe called the Jordan XX9, you know the cushioning story – unlocked Zoom in forefoot, Flightplate, and foam heel. Go ahead, complain because there is no Zoom in the heel and they “owe” us for the price – I’ll keep playing in the Air-less shoes with no problems. I like the firmer feel under the heel – coming down from rebounds and a little off center, the stability is better in solid foam than an Air bag. I did feel the Melo was softer in the heel than the XX9. Where the XX9 is encased foam under the heel, the M11 is opened up and almost has a crashpad effect. The forefoot is basically the XX9 – not as bouncy as last year’s unlocked models but more stable. I didn’t feel sluggish or slow at all – the Zoom responds under foot, it just doesn’t have the “snap” like the XX8/SE/M10. 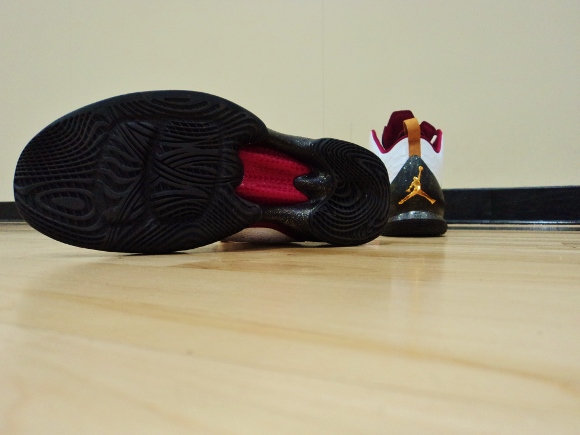 Traction – Hate to keep comparing the M11 to the M10, but it’s my review, so here goes – this is the one area that I felt was worse than the M10. Much like the XX9 was a little behind the XX8, and for the same reasons, the M11 was just a little off. Main reason I can see – the outsole is almost a flat traction. By that, I mean the grooves, instead of being a wiper blade or tooth shape, are flat on the edges facing down. This makes it easier for the shoe to slide across a surface instead of biting in. I stuck, but it too effort and hard stepping to get to the level of the Kobe IX, Rose 5, Clutchfit, M10. Again, not bad, but I could feel on cuts and drives, trying to turn corners, my feet giving away some. Defense was not as noticeable, as staying in front was not harder. Give us some teeth or a softer rubber and good to go. 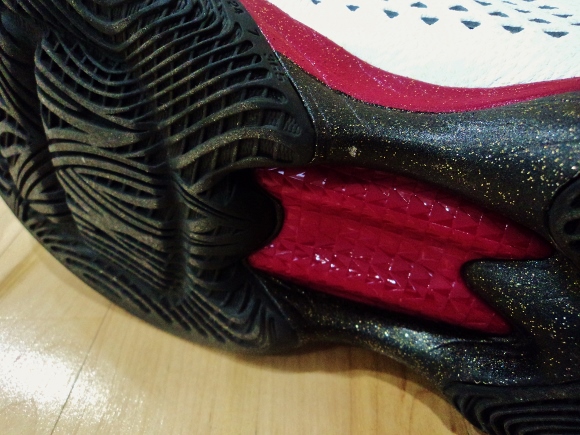 Support/Transition – This is where, to me, the shoe shines. Again, back to the materials, leather just hugs a foot like your blanky on a sick day, and after a couple of games of full-court the midfoot and forefoot was locked in. FlightWeb supplies the midfoot lacing and it helps the leather wrap you up, pulling the foot down into the midsole, helping keep the ride low and fast. Not as low as a shoe like the CP3 pr Kobe VI, but very much like the Rose 5 or Clutchfit, so unless you just NEED a rocket like the Rose 1 you should be good with court feel here. The heel is again supported by the harder synthetic, although the ankle cut keeps it from boot properties. To be honest, this ankle cut is perfect for me. I went through the “lows only” phase like just about everyone else, but lately I have been loving higher cut shoes again. The M11 doesn’t cover the ankle but just below giving that mobile but safe feel.

Transition is SMOOOOOOOTH. Where the decoupled M10 had a bit of slap, and then some flex under the midfoot, the cage under the M11 midfoot and around the shank keep your forefoot and heel in harmony. Not as smooth as the XX9, I still felt great backpedaling in transition defense (where I really noticed the toe to heel transition) and coming off screens planting for jumpers. I know Melo isn’t making a living off dive cuts or defense, but if you do, then you will be good. 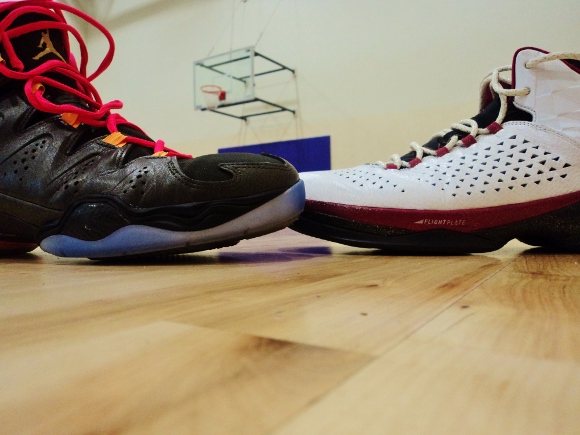 Overall – Like most of the Melo line, especially the M9 and 10, I completely and thoroughly enjoyed this shoe. Of course, certain aspects could be better, but the perfect shoe ain’t out there yet, and if it was, I would be out of a job. Traction was the weakest point, and it wasn’t “throw ‘em out” bad – just a little worse than I expected. Cushioning, fit, transition, comfort, and MATERIALS are all good to great, and I see myself playing in this shoe long after the review is done (not always the case). As most of you know by now, the Jordan Christmas series for 2014 takes cues from the Air Jordan VII Cardinal Red colorway worn by The Man in 1993 (NBA on NBC!!!!!). The M11 is the closest in the series to replicating that shoe, using the Cardinal for the lace loops, inner lining, and midsole. Wearing these won’t make you MJ, or Melo, but they will give you everything you need to play to YOUR best. Keep sleeping on JB performance – these are the future classics.