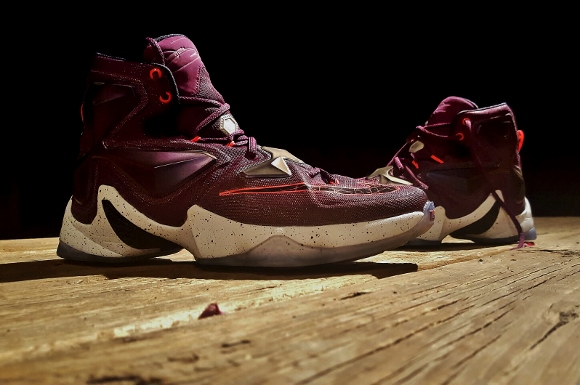 For the last ten years, there should have been NO DOUBT who the best player in the NBA is. Yeah, Kobe and Timmy are up there, but Lebron has been another level of great.

Losses in the Finals aside, who else can match his skill and overall physical abilities? Not one. And if you are going to be a superstar, you have to have the kicks to get you there. The Lebron X was a consensus top performer, save for a stiffness in the midsole. The XI – I liked them, but LBJ sure didn’t. The XII was a step in the new direction. Now, with the XIII, we get a redesign, not a redirection, and the evolution of the Hex Zoom and Hyperposite upper gets Nike back on track. The camera’s here, and the microphone…Let’s go… 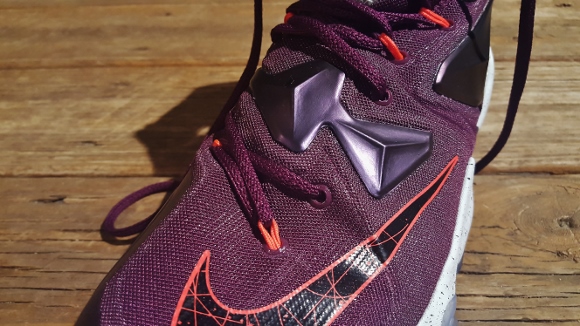 MATERIALS – Lightweight mesh upper for a sock-like, breathable fit? Ehhh, hold on. Socks stretch. Socks widen to allow the foot entry. The Lebron XIII is a pain in the @$$ to get your foot into, and there is no stretch. And I wouldn’t say they are breathable – I have had serious Shrek foot wearing these. There are some additional vent holes under the mesh to help, but not much.

There is a huge Fuse overlay on the medial toe/forefoot for Euro’s (not the money, the steppers) and then we get to the Hyperposite overlays. Call them what you will – ugly, unnecessary, overkill – the one on the forefoot does a great job of containing side-to-side movement. Additionally, there’s a Phylon midsole with iced-out soles and the thickest Zoom units yet, and Flywire for help with the lacing; we have the recipe for success. Let’s play… 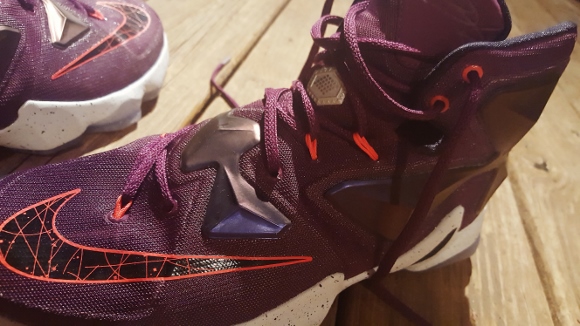 FIT –  Don’t misunderstand – the shoe, once you pull and tug and yank to get your foot into – fits great. They fit my foot perfectly, length and width. I have heard some say .5 down, but not me. TTS all the way. The lacing system is set up asymmetrical (not down the middle like normal) which takes that lace pressure off the top of the foot. The Posite on the forefoot, again, really does help in lateral containment, but be warned – IT DOES NOT GIVE. It does warm up and flex to the foot, but it will not stretch, so if you are a wide footer, well, first you have to get your foot into the shoe. Then the Posite will probably eat you alive Land Shark style. The heel is locked in by the high ankle collar but not constricted. The low cut in the back of the shoe let’s you move and run with no problems.

This is one of a few shoes where I didn’t have to pull and tighten completely to feel locked in. I love when my foot has no movement in a shoe, and the XIII accomplishes that goal. 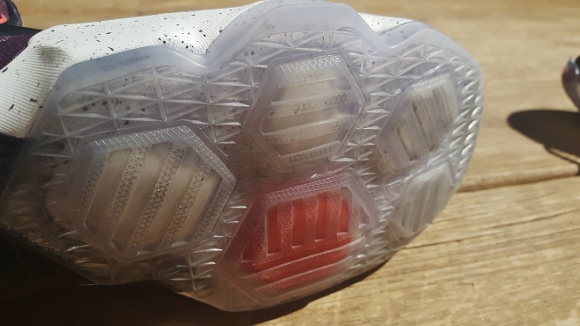 TRACTION – For a storytelling pattern, I was NOT impressed…at first. Like most, I saw a serious lack of pattern across the pods, and it didn’t look promising. Wrong. On only an EXTREMELY dusty 24 Hour Fitness court did I slip. On the D-1 college court, my church court, and a different actually swept 24 court, I was Spider-Man–sticking to every surface.

It has to be the materials and the way the pods are segregated. The actual pattern is just straight lines across with the XIII triangle pattern in the recessed areas, so that doesn’t even touch the floor. The rubber is soft and extremely pliable, so it sticks and grabs all. However, it also grabs every spec of dust on the court, in the hallways, in your car driving to the gym, and some from your closet at home, so you will be wiping every chance you get. I’m anxious to see how the rubber behaves and if it affects overall performance when the different colored outsoles release. 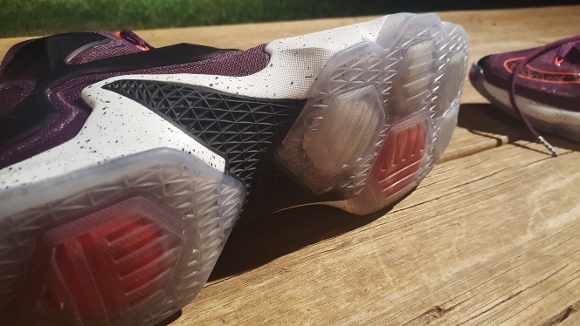 CUSHIONING – Here is where it gets good. Big, BIG Zoom units in the forefoot and heel. Thickest ever, according to Nike. I’m not cutting them open to find out but they are large. The unit under the ball of the foot is an evolution of the Met bag the Kobe’s used to use (when they were good) but ‘roided out. I actually did feel the bounce from this unit and it made me wish for real Zoom all over again. There is a definite upgrade over the XII in this area.

Where the XII had nice impact protection there just wasn’t a ton of feedback. Just the one large pod has the forefoot already bouncing and pushing more. The heel unit is thicker this year as well, but not near as pronounced as the XII. The XII had that unlocked Zoom instability feel (almost TOO bouncy) but the XIII solves that issue. One reason might be the exposed midsole. The XII had the double-lasted (upper covered the midsole) upper and it was harder to “hide” the sole. The XIII goes back to an exposed Phylon carrier where the pods can be recessed. And it could be Nike fixed a problem. Who knows. The two smaller pods are there. That’s it. 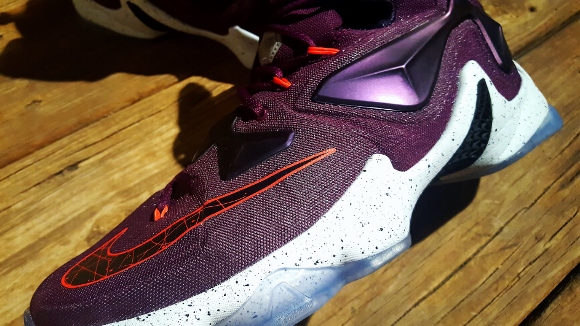 SUPPORT/STABILITY – Surprisingly not as stiff and strait-jacket as you would think from looking. Sure, the ankle is cut high, but dips low in the back for flexibility. The Posite wings aren’t attached to any other structure so, honestly, they are just a stiff cover (don’t believe that “Zonal Protection” story – it’s about technology and pricing). The real stability and support comes from the fit and lacing, and both are good/great. The asymmetrical lacing system takes the pressure from the top of the foot and spreads it across areas where you won’t notice. There are also Phylon wings built into the lateral sides extending from the midsole to keep you standing straight and tall.

The Posite lace piece, at first, seemed pretty, well, stupid. Posite doesn’t stretch, in theory, and that would seem to be an area that needs some give for comfort. Playing, though, you want that area secure and locked, and the Posite fully takes care of any movement or shifting by holding the shoe together when lateral forces are applied. In other words, push left or right and the shoe doesn’t give. Makes reaction times quicker when you aren’t waiting on ] your shoe to catch up.

OVERALL – I expected to hate this shoe. I really, REALLY, liked this shoe. No other way around it, the LeBron XIII performs well on all levels. Cushioning is WAY improved, transition is buttery smooth, traction is great on clean courts and playable on the dirtiest of situations, and support is there but not restrictive. Looks-wise? Don’t care – they are basketball shoes. Ask the guy you go around or over how they look if you are that concerned about it.

They won’t make you Lebron, probably won’t even improve your game a little bit, but they will give you every tool to work for your own Superstar status. Finally, it seems Lebron has a shoe he can actually wear. 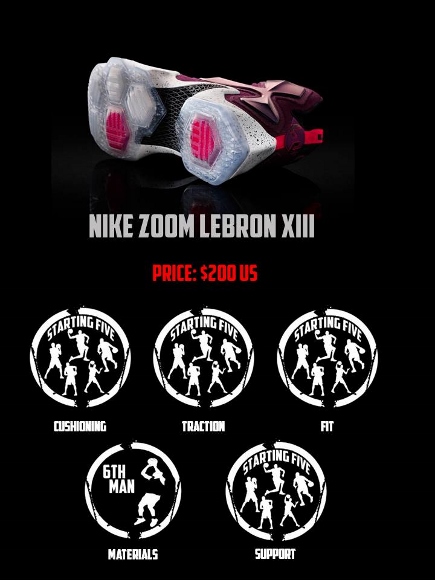