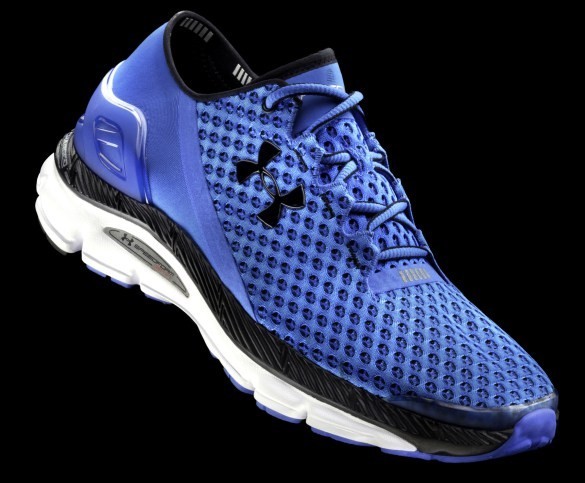 Have you seen the new Under Armour Speedform Gemini yet? You haven’t? That’s because Fortune has scooped the sneaker bloggers. Imagine that, a real news outlet reporting some sneaker news. If this continues, some of the less reputable sneaker blogs may be in trouble, because heaven knows, what passes for journalism at some of those sites will never match what the big boys can do to get juicy scoops.

But I digress, let’s get back to the kicks. The Under Armour Speedform Gemini continues Under Armour’s crusade to use apparel factories to make shoes. Though the Speedform Apollo was a let down to some, I’m glad they’re sticking with it and trying to get better. I love it when sneaker companies use new materials, especially those that could act more like clothing than fuse. I’m pretty much done with Fuse after the Jordan XX9 and the various Knit sneakers have shown me a new level of comfort. I just need something that flexes the way my foot wants it to. I’ll be staying away from plastics for the foreseeable future.

But that’s not all we learn from the article by Fortune reporter John Kell:

Under Armour has debuted a new, $130 running shoe that will land on retail shelves next year — the athletic-gear company’s latest bid to make a bigger dent in the competitive world of running.

Called the Speedform Gemini, Under Armour’s new shoe that has cushioning that hasn’t been used in any of the company’s earlier shoes. Although the bulk of athletic shoes sold in the U.S. aren’t used for participating in sports, Under Armour said this shoe is meant for dedicated runners. Dave Dombrow, vice president of footwear design, said the shoe was designed “as a shoe for running, we want people running the marathon, the half marathon, any distance. It was originally designed for going long.”

So, not only do we learn that this shoe releases early next year, we learn it will be priced at $130, AND uses a new type of cushioning.

Given Under Armour’s track record with Micro G cushioning, I’m excited to see what their next cushioning system brings to the table. And at $130, it doesn’t feel too expensive. What does everyone else think?

There’s a few other tidbits on Under Armour, the Speedform Gemini, and their revenue growth in the article. To read the full article, click here.