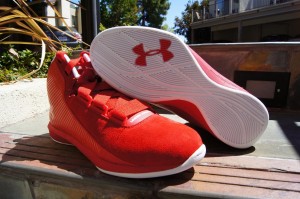 My first Under Armour basketball product has arrived; find out what my first impression on this particular model is after the jump… 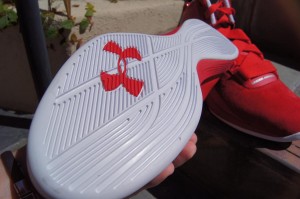 Traction- It looks nice. The solid rubber is something that I typically prefer, translucent soles work just fine don’t get me wrong… I just like solid rubber. Spacing between each traction groove is great and the rubber is soft enough where it moves freely with your fingers so it should grip nicely on court. 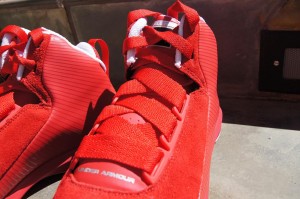 Fit- Honestly, just from trying them on… they were perfect. It is a solid one piece upper so who knows what will happen to the shoe (while flexing) when you’re running around in them but they were nice and snug. The fat lacing system is sort of weird but that’s also what got me to pick them up, reminds me of the 90’s era when swapping out fat laces in your kicks was cool. Spacing within the lacing system is also great. The eyelets are far enough apart that once fully laced there is no warping action in the toe box. 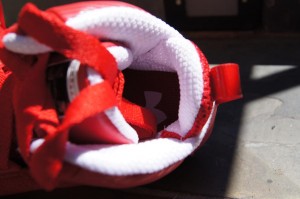 Inside the shoe is pretty darn comfortable as well. The lining used is soft and plush. 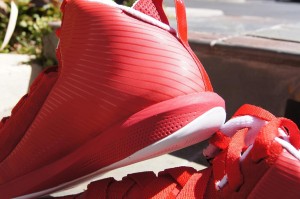 Cushion- It’s Under Armour’s Micro G tech. Something I’ve never tried before. After pulling the insole out (ortholight insole) all that it’s made of is very soft foam. The entire midsole is the Micro G, I believe, and it felt nice just from standing in them so I assume that once I start playing in them I will get some nice cushion under foot. 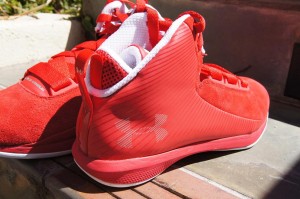 Materials- It’s a half and half mixture of synthetic and suede. The synthetic is basically plastic, like Flywire without the thread aka strands inside. UA used nice suede however the quality and craftsmanship was pretty bad… Jordan Brand type of bad. There is glue marks and creases all over the midsole which was prior to me even trying them on. Scuffs and other small marks are all over the shoe as well. This is something that I have come to expect from Jordan and Nike, but Under Armour is a ‘newer’ brand so I expect better… even though they are at the lower end of the price spectrum. 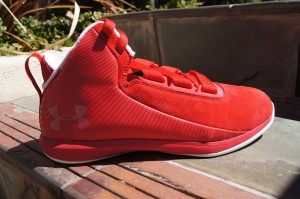 Overall, they are very nice shoes. They feel good so far and look like they may end up being a good on court option. I will start playing in them tonight so I will give you guys some updates throughout the wear test and keep you filled in.