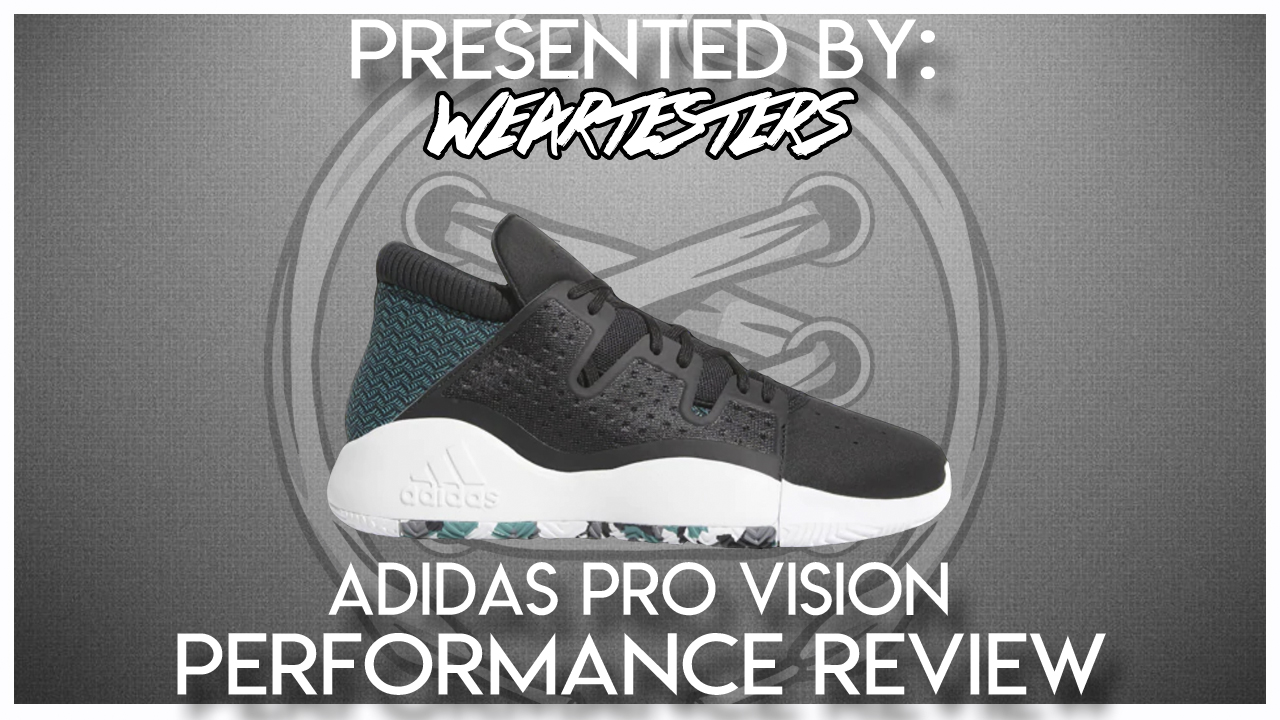 The most affordable model in the recent trio of basketball shoes, the adidas Pro Vision performance review is here.

Once again, we have herringbone but this time around, a slightly different implementation gave different results. As expected, these played well on clean courts, but the difference came around dust. Though it wasn’t great on bad floors, the shoe was able to maintain adequate bite for quite a few plays between wipes.

Improvements over the last shoe I tested, the adidas Marquee Boost, resulted from wider spacing between treads throughout, further coverage up the outsole edges and solid rubber – which has been on most, if not all, Pro Vision colorways if I can recollect.

A couple hours outdoors and traction still performed well. I’m still not sold on its durability, however, despite this being marketed as a shoe that transitions seamlessly from hardwood to blacktop.

Bounce cushion is used in the adidas Pro Vision and it rides low to the ground in the forefoot. The heel is a little heftier and has enough plush, comfort and protection.

Something about the court feel in the Pro Vision gave me a different kind of confidence. I’m knocking on an already cracked door of 30 years old so I haven’t felt this quick in a while. I found myself cutting and driving to the basket the way I used to – all thanks to the response and flexibility of the tooling.

Although I said there was enough impact protection in the Pro Vision, but I still prefer a little more underfoot. However, the Pro Vision was enjoyable for a setup that typically isn’t my cup of tea.

There’s mesh on ¾ of the upper, a tailed collar, felt-like material over the toes and rubberized-ripstop overlays that integrate into the lacing system. It’s not much to expect at the Pro Vision’s price point but functional nonetheless.

The mesh has a crinkly sound and feeling that screams “cheap”, but it is reinforced with an internal heel counter and lacing wings to get the job done. The felt-like material in the toe had me worried at first, but honestly, it felt good and conformed to my foot very well. Initially, I had a slight pinch in the left shoe where the material meets the tongue but after a couple of wears, it was a non-factor.

The collar cut is odd but was never uncomfortable for me – just keep in mind I only ball in crew socks so rubbing might be an issue for some. The felt material sure gets dusty as hell but that’s from getting stepped all over. Otherwise, everything looks intact so durability shouldn’t be bad in that area.

Overall, the materials aren’t great, but there aren’t bad either. They are just kind of…there.

Fit was almost perfect for me, but I can easily tell it wouldn’t be the best for a lot of wearers. The shoe simply runs narrow all the way through — something I could tolerate, but wide and even average width-footers may be bothered by it. If you are a part of the latter, prepare to start out trying at least a half-size up or just them skip entirely.

Lockdown was okay, but kind of a nuisance. The ripstop overlays hold all the eyelets, so it was nearly impossible to keep the laces tight throughout. The overlays split into three sets of panels and the more adjustments I made going up, the more the laces just loosened up between the first and second panels. Ultimately, I just had to accept it and keep it moving.

This is kind of veering away from fit, but watch out for the Pro Vision tongue. It sits over the upper and under the overlays, so if you aren’t careful making adjustments, it can create gaps or fold underneath itself, which can cause discomfort. It’s not a good look to have those type of concerns lacing.

One of the highlights of the Pro Vision is support, and it has an abundance of it while maintaining a lightweight feel. As I mentioned, the fit was good for me personally, so the other support features put it over the top. A huge outrigger, a midsole that cups your foot and strong overlays placed for lateral containment. If the fit works for you, everything else will fall in line perfectly.

The adidas Pro Vision has some good spots at a good price, but I can understand why it doesn’t seem to garner as much interest. If you are looking for a cost-efficient sneaker that plays light enough for guards but has enough support to satisfy a big man, these will work. However, I do think there are other decently-priced sneakers out that give you more without sacrificing too much of the benefits.

Price may come first for some — and there is nothing wrong with that — so if we are talking $100 and under for retail, I can’t think of anything that has this type of versatility.

It goes without saying, but thank you for taking the time to read. I appreciated the support from my first performance review for a hoop shoe and I hope you find this helpful if the adidas Pro Vision is on your radar. Until next time folks, Leak out! 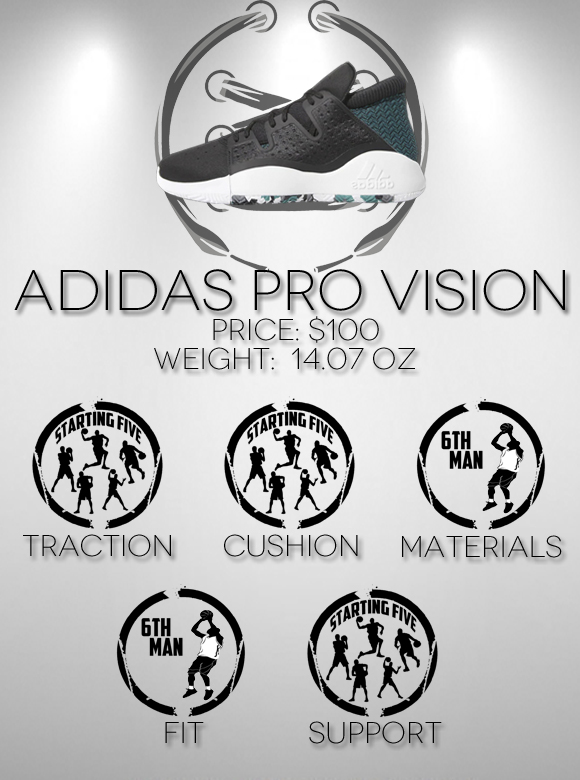