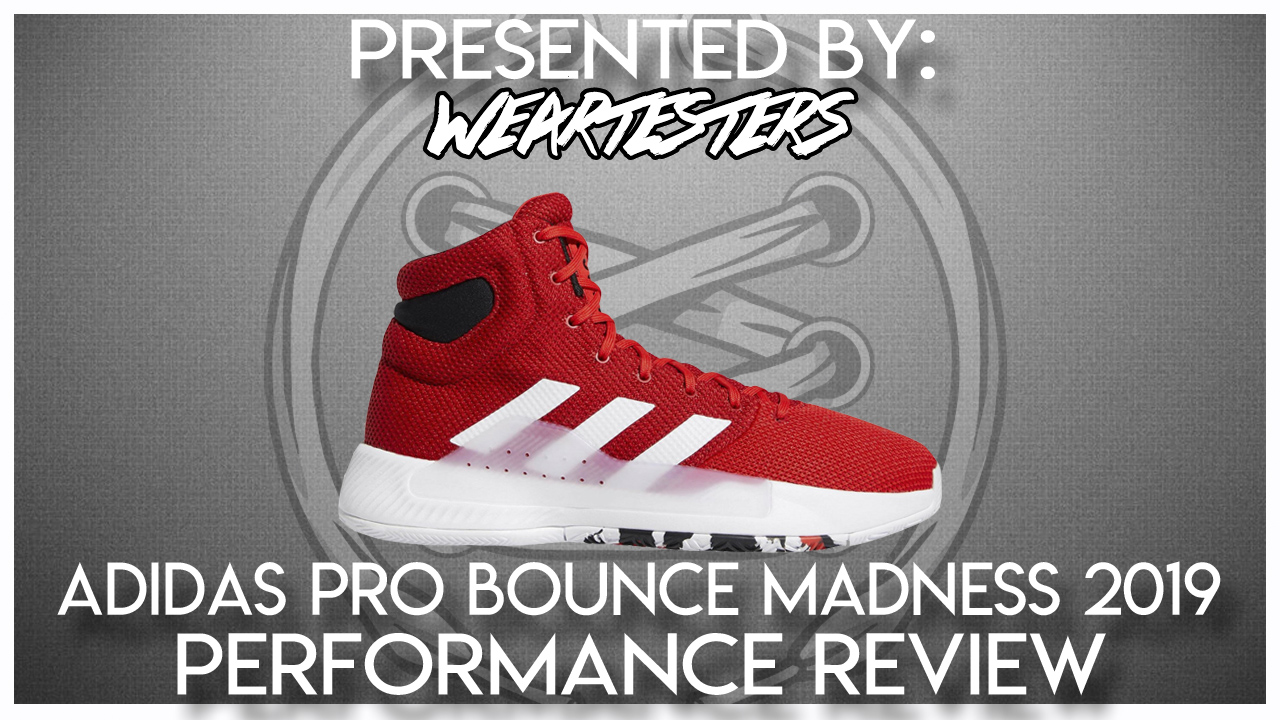 With March Madness underway, we bring you a performance review on adidas hoops’ latest team model: the Pro Bounce Madness 2019.

adidas. Basketball. Herringbone. At this point, that should be no surprise and I am not tired of the pattern. On a diverse set of gym floors, some with major flaws like humidity or general slickness, the Pro Bounce Madness’s traction was as reliable as a certain Samuel L. Jackson outburst, which was honestly a surprise given how tightly packed the herringbone is.

I surmise that the consistency of the traction is due to good rubber compound, though I suppose a ton of herringbone coverage for both linear and lateral movement did help so long as a ton of dust isn’t present, which somehow was the case for the most part of three weeks testing.

As a team shoe with soft rubber and not much depth, I wouldn’t even consider these as an outdoor option.

Full-length Bounce was on point from day one until now. You get a lot of it in the Pro Bounce Madness 2019 as the name would imply, but using a word like ‘chunky’ would be a disservice in this case, being that you still get a lot of court feel and smooth transition compared to some other sneakers.

My favorite part of the Pro Bounce Madness 2019 cushion is the added impact protection and feedback it gave. I’ve needed it in league games recently where I’ve been relied on for a lot of rebounding. Having to play a somewhat inside-out game, I can understand why this type of Bounce is used for what can be considered an everyman’s basketball sneaker.

This may be an unpopular opinion, but I generally liked this Pro Bounce Madness 2019’s materials. It’s nearly 100 percent mesh with near minimal (but still unnecessary) fuse and synthetic suede overlays. The rear panel mesh on the lateral side and tongue is a bit beefier while the rest of the shoe’s upper is super lightweight with minimal layering underneath. Inside, you have nylon lining which I hope is now standard with adidas, and there is a molded collar on the high cut that is comfortable, but still not my cup of tea.

As much as I liked the upper, there was still a bit to be desired. The materials just did not feel substantial in the forefoot. No required break-in is great, but it nearly felt like nothing was there for containment, which was a little bit of a distraction. It wouldn’t have helped make the shoe feel premium but I would have liked to see ForgeFiber return for some reinforcement and added aesthetic.

Durability has been surprisingly good minus the dirt and grime of getting stepped on constantly down in the paint. I expected all kinds of fraying by now at the toe, but everything is still intact – including that cheap felt-suede, though that is likely because it is a little more protected on the medial side of the shoe.

I have no regrets about going true to size. They do stop a tad short before the toe for me, but the mesh is forgiving enough for multiple foot width’s unless you are on the extreme end of either side of that spectrum.

With a near traditional tongue, there is enough room for lacing adjustments. Midfoot lockdown was good and going with the high cut will allow you to get good heel lockdown without having to lace through every eyelet. There does seem to be a tiny bit of space above the toes but again, I think that is more of a material issue than the actual fit.

Not enough forefoot containment? No problem. Everything else about the adidas Pro Bounce Madness 2019 lends itself to the support department. The Bounce cushioning is stable, the base is wide with massive outriggers, lateral TPU banking barriers are present with the look of skewed Pizza Hut logos and the internal heel counter is decent enough. While my forefoot issues didn’t give much assurance when putting the shoe on before games, I was totally fine on the footbed when things got going, so there really isn’t much to worry about.

I think the adidas Pro Bounce Madness 2019 is a solid basketball sneaker. As much as I enjoyed it, I still can’t recommend it over something like the adidas Dame 5, which is a very similar sneaker with even better traction, making it a better value at a price point right in between the Pro Bounce Madness high and low versions.

adidas has hit us with a ton of good options this season but as a team shoe, the Pro Bounce Madness 2019 stands on its own and because of that, I don’t think you’ll be disappointed if this happens to be a shoe provided to you, no matter what position/style you play on the floor. In a vacuum, I give these a thumbs up.