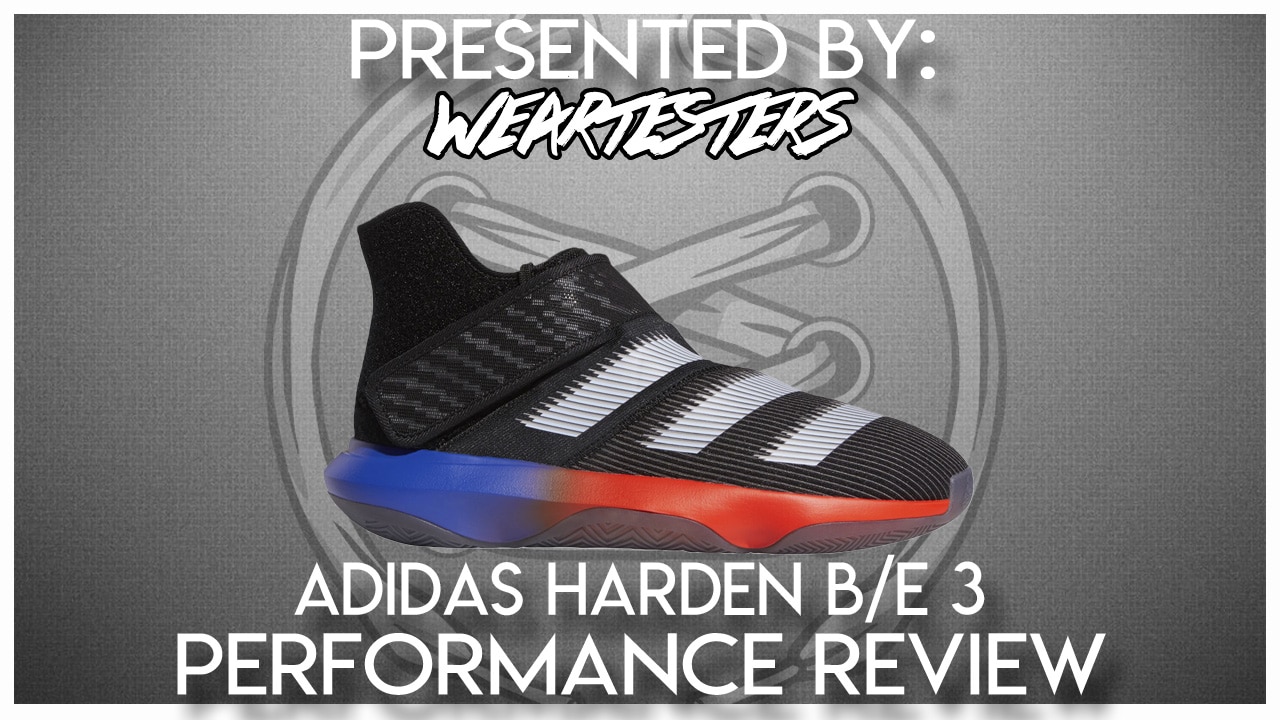 Full disclosure, this adidas Harden B/E 3 pair didn’t make it as far other sneakers in testing, but far enough to come to a fair conclusion. So, what happened exactly?

Different variations of herringbone throughout is great, but the semi-translucent rubber of the colorway tested did no favors for traction. On clean floors, the positive results were consistent, however, if any dirt or dust is present expect to wipe frequently because it will accumulate quickly.

A solid rubber colorway may alleviate the issue, but from what I experienced, it just wasn’t great. From a durability perspective, the fraying process didn’t take long at all, so I’m not sold on it for outdoor use.

The Harden B/E 3 comes with a hefty slab of Bounce which wasn’t the greatest implementation of the foam, but at the same time it’s the shoe’s strongest feature — in my experience. It doesn’t provide a ton of rebound, but it also isn’t mushy so response doesn’t suffer. In transition, Bounce always seems to provide smooth transition for me and this FTW-esque tooling only made it better. For such a puffy looking base, mobility was not an issue at all.

It was hard to love the upper of the Harden B/E 3. On the back half, you have a huge panel for hook and loop on the lateral side along with some sort of screened textile on the medial panel. Up front is more of an open-cell-like mesh covered by a very stretchy textile shroud.

This all resulted in good heel containment, but hardly any from midfoot forward. I recall comments stating the B/E 3’s resemblance to house shoes (or Deebo slippers, as we called them growing up around my way) and that’s exactly how it felt up front. They’re hella soft and comfortable, but not really reasonable for the sport they were made for.

Oh yeah, these get hot as hell under the shroud, just like rocking Deebo slippers outside in the summer would.

Side note — Doesn’t the toe down of this colorway look like Venom just straight sat on Spider Man for no good reason? Okay, I’m sorry…

Because of the lack of structure up front, trying the B/E 3 true to size was a joke. I immediately asked for a half-size down, then even tried to check out a whole size down, but none were available at the time. I ended up going with the half down and still needed to stack a second set of insoles to get a better fit which did work a bit, but not enough unfortunately.

Getting good lockdown was a task with the lacing system. Not only do you have the shroud’s elastic band to combat and get under, once you lace up further you then have a strap to keep out of the way to finish up adjustments.

Overall fit was just bad from the get go, and the shoe gets in its own way towards making it any better.

Questionable material choice and bad fit/lockdown – you know where this is going. I will say the back half of the shoe was secure as far as keeping the heel in place (partially due to the strap system, but it was the opposite of what the front half provided. For a sport you should play on the forefoot near all the time, it sure wasn’t something I felt at ease doing with the lack of structure up front.

Strange enough, the midsole itself provides more stability on the medial side to me, and regardless you sit atop all of it without good caging or some kind of reinforcement. I still did my best to make it work but a few too many close calls coming off the footbed and things were never the same for me. Fortunately, I wasn’t hurt and I’m not necessarily putting the “dangerous” stamp on this pair – but from that point the lack of security in the shoe became too limiting.

Again, I didn’t put the same amount of time into testing the Harden B/E 3 as I typically would, but the fact is the little good in the shoe wasn’t going to change drastically and the negatives were surely not going to get any better at the point of testing.

Aesthetically, these weren’t turning many heads in a positive way and, unfortunately, I wouldn’t suggest performance to be a saving grace for the adidas Harden B/E 3. Though $100 is more pocket-friendly than many, there are other pairs around the price point that just will perform better, including some options I’ve already moved on to… 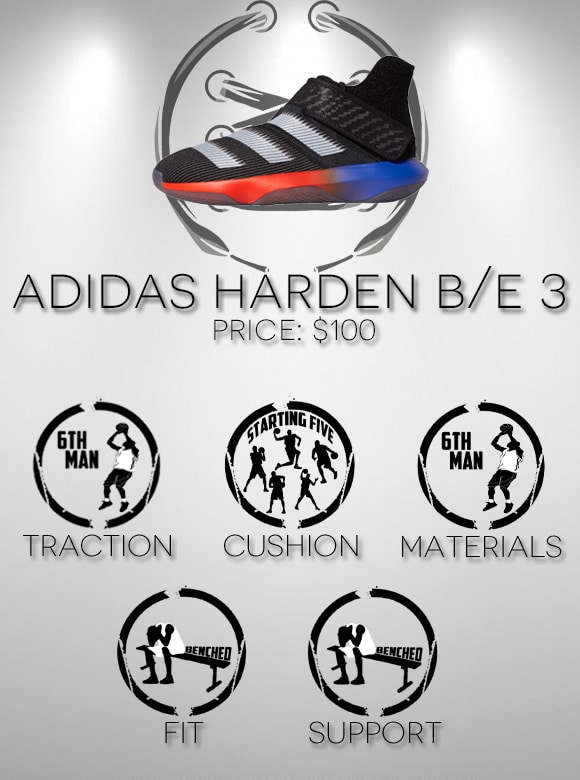