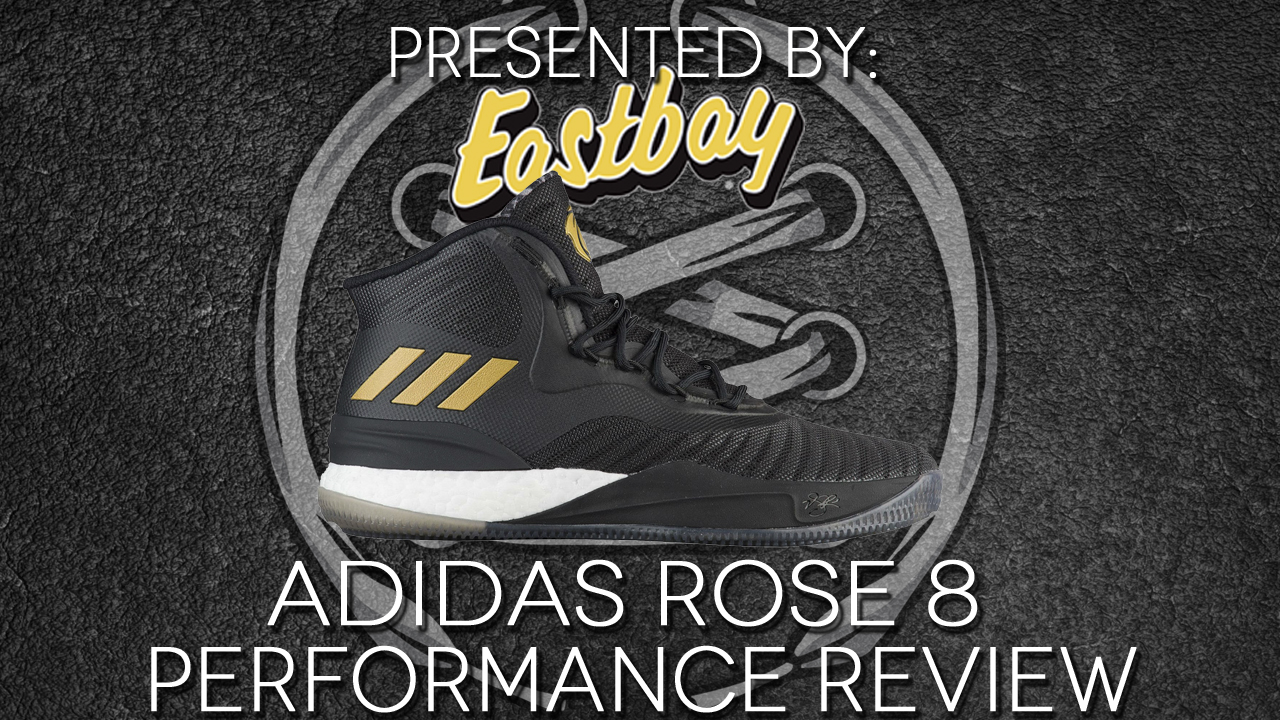 You can find the adidas D Rose 8 available now at Eastbay.com

Traction /// I wish I could say the traction on the D Rose 8 was as beastly as it was on the D Rose 6 or 7 but it just wasn’t. That was a letdown because traction has always been a strong attribute in the D Rose line. As a player that relied on his speed and agility he needed a shoe that would be able to keep up with him from the ground up.

Some people may say that Rose’s declining health doesn’t require amazing traction or  that adidas has simply given up on Rose and his signature shoe. However, I don’t believe that is the case. Making up excuses for brands isn’t something we do here. adidas designed and released a shoe that doesn’t offer the same level of bite previous versions had, simple as that.

Do I feel the translucent rubber was the cause? No, not this time. It felt like the pattern was the actual issue because it’s aggressive, but it’s also flat. Flat traction rarely works well on all surfaces unless its comprised of some heavy duty rubber.

The rubber used on the Rose 8 is the same tacky stuff that adidas has been using on previous models — all of which have excelled in performance due to the compound and the pattern. This time around, only the rubber compound excelled while the pattern left a little to be desired. It worked really well when it worked and not so well when it didn’t.

No, there isn’t that jump out of the gym feeling when wearing them, but you can definitely tell that it’s Boost and that this isn’t just some basic cushion system. It’s top tier cushion in terms of impact protection and it doesn’t sacrifice stability or much court feel.

adidas opted to cage the lateral forefoot with a rubber panel, and just like the Crazy Light 2016, this proved to be a great addition to the midsole because it ensures its lateral stability despite its restriction on that Boost-y feeling. I actually prefer the way this cage played more than the D Rose 7’s forefoot cage, which was the actual outsole wrapping up and around the Boost. On the Rose 8 it felt more fluid and less restrictive but still stable.

If you want a little bit of everything out of your cushion then this might be the setup you’ve been waiting for.

Materials /// When I mentioned this on Instagram there were some people that took this as a dig on the entire shoe and got a little defensive, even though those people likely didn’t have the shoe themselves, nor did they intend on buying a pair to try out. The D Rose 8 has the worst materials used on a basketball shoe in 2017 other than the Nike Kobe AD Mid.

Now that I’ve said that, the materials worked. So, while I don’t like the materials that were chosen after receiving the D Rose 6 and 7 in wonderful Primeknit variations, they still played well.

The forefoot is primarily mesh with foam acting as the structure. It isn’t anything new but it allowed for a lot of mobility and flexibility in the forefoot area, which is great. But, and there’s always a but, the material choice allowed for the forefoot section to feel like it sat above your foot rather than resting on your foot. This left a lot of dead space in the toebox and if it wasn’t for the plastic rear section of the shoe that has little to no give to it, the overall fit could have been very sloppy. Ventilation was great though, for those wondering.

Now, about that rear section of the upper. Well, that felt like it was ripped right out of 2010 and brought back into the future. We still see fuse used a lot on footwear, but nowadays it’s much more strategically placed; it’s mostly used to merge panels without the use of stitching, or it’s used as a thin overlay to protect high-wear areas and stress zones.

Luckily, this section does break-in and offer a very nice fit — it saved the forefoot from feeling sloppy as hell — so it isn’t a loss. It worked really well on-court, it just isn’t what I like.

Fit /// Like most adidas models, the shoe doesn’t run perfectly true to size. I went true to size due to the rigid heel and the way it’s sculpted and that worked out for me. If possible, try on the shoe before purchasing, and I’d say that wide footers will likely be okay going true to size with the volume within the toe.

Lockdown, in the midfoot and heel, was fantastic in the D Rose 8. The materials might not be what I like, but as I said above, it worked — and it worked well. This section of the shoe felt like it was a built-in ankle brace without limiting mobility.

Once laced up I felt secure and that is exactly what a wearer would want. If using these materials was the only way adidas could have achieved this type of rear fit then I’d willingly make the sacrifice because it’s a trade that is well worth it.

Support /// The adidas D Rose 8 has all the support features that you’ve come expect in 2017. The heel counter keeps your heel on the footbed and your ankle stable and safe. Remember, real ankle support isn’t collar height, it’s all about heel lockdown and containment.

We’ve seen the same torsional plate used on the Crazy Light 2016; it worked well on that shoe and it works well on the D Rose 8 as well. Stability is also on-point with the wider forefoot and lateral cage around the Boost. Then you have the upper. Yes, fuse is plastic and its a cheap stiff material. However, it does have its benefits and for that it’ll get a pass — although leather could have done the same thing and felt a lot better, just saying.

Overall /// The adidas D Rose 8 is a very solid shoe. I just don’t think it was as solid as the 6 or 7 in the Primeknit options. I’m still holding out hope that we’ll see a Primeknit edition of the D Rose 8, but I won’t be surprised if we don’t see one at all.

Traction is my main gripe with the Rose 8. I understand wanting to try something new, but adidas knows better. We don’t need funny looking patterns that tell stories. Just give us aggressive herringbone that works. On the bright side, everything from the midsole up worked really well and I would recommend the Rose 8 when it goes on sale. 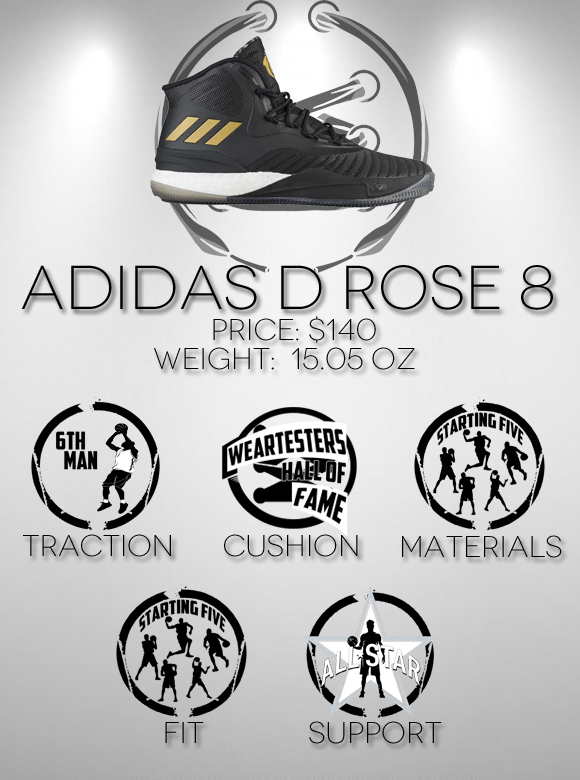