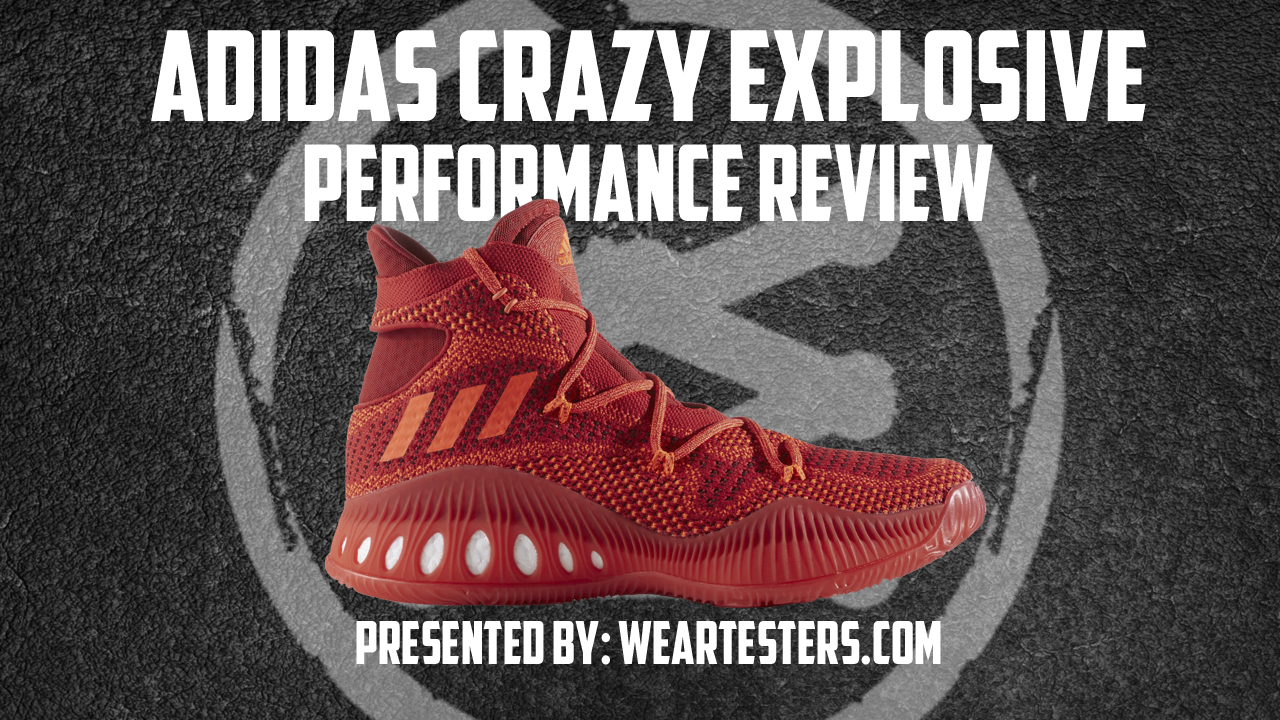 adidas has seen a fundamental change in design and performance over the last three years, and it all starts with two words: Boost and Primeknit. What would a shoe with both feel like on a basketball court? Luckily, we already know because the word is out and the adidas Crazy Explosive is a top shoe for 2016. What is one more opinion when we already know the tale of the tape? Hopefully you’ll learn something if you are still undecided, so read on… 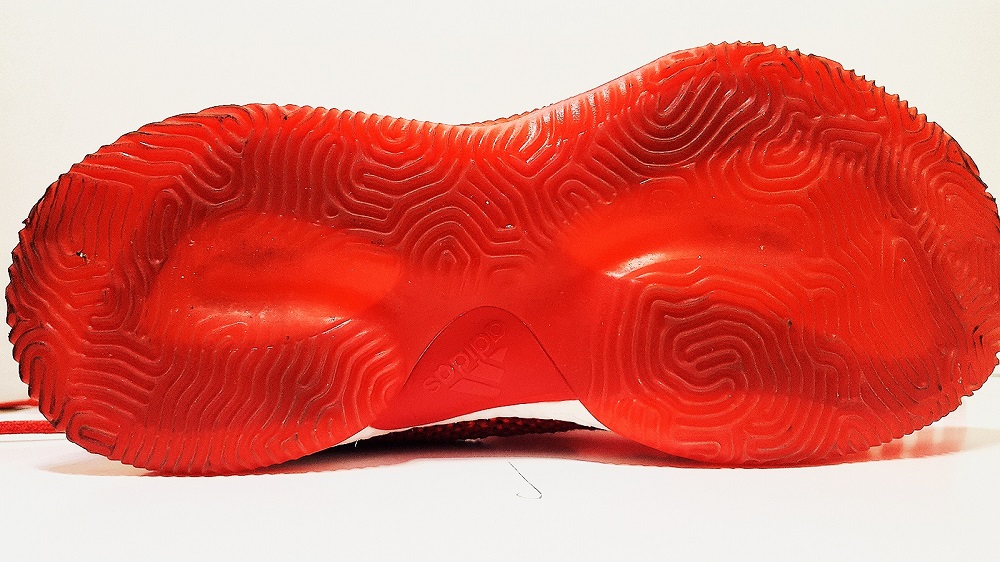 TRACTION – Who knew coral would make good grips? That is what adidas is calling the pattern, and it works on any indoor court surface. Not exactly biting, more of a smooth grip and release, making coming out of stops smooth and quick. Where the Rose 7 is a dig in, hold, and push off, the Explosive is more long stride and transition. Durability was not in the blueprint, however, as the rubber began peeling off the edges within about three jumpers’ time — okay, not that quick, but definitely sooner than wanted. Outdoor asphalt or rough concrete will eat these like Krispy Kreme — one quick bite. 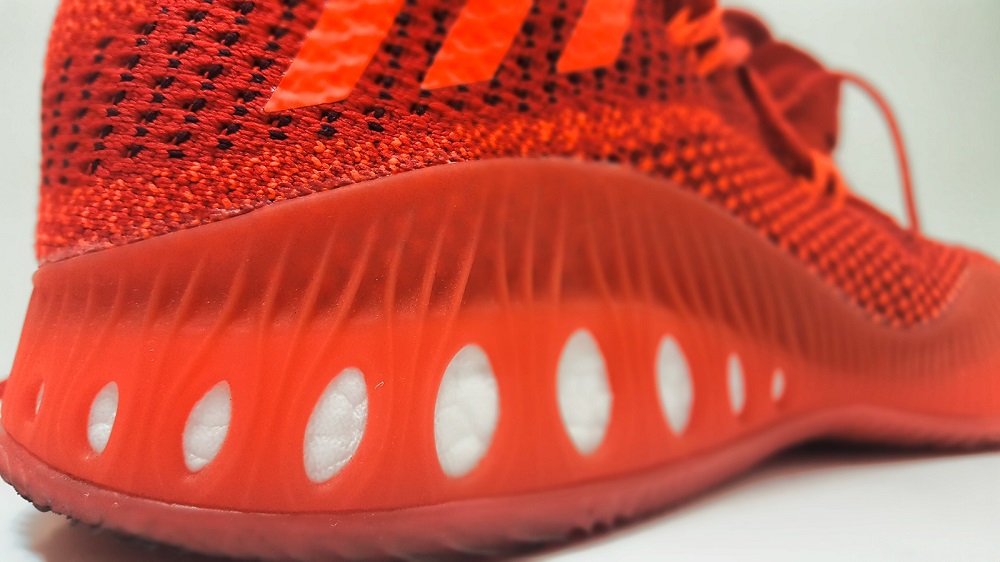 Kidding, kind of. Boost has been a little different since it hit courts two years ago; it’s too unstable to pack like the runners unless there is a caging system. If the instability is cut down, the cushion properties are cut down also. A fine line to walk, but the Crazy Explosive gets it right. The heel is packed thick with pellets but the lateral side is caged in a polyurethane to keep the Boost from expanding too far out. This accomplishes two missions: first, it keeps the shoe from tipping out, and second, the Boost stays underfoot for quicker response. The forefoot is encased also, but as thin as the Boost is this may have been more for containment and design. Either way, impact was NUH-UH while response into the next step was easy and smooth with very little lag or sinking feeling in the forefoot.

There have been some “opinions” floating that the Boost is not as responsive or “dead” in some pairs. Speaking for this reviewed pair, there is no issue at all with response or impact protection straight out of the box. From the first day until now, 3 almost 3 months later, the Explosive is responsive and cushioned without feeling too soggy and mushy. 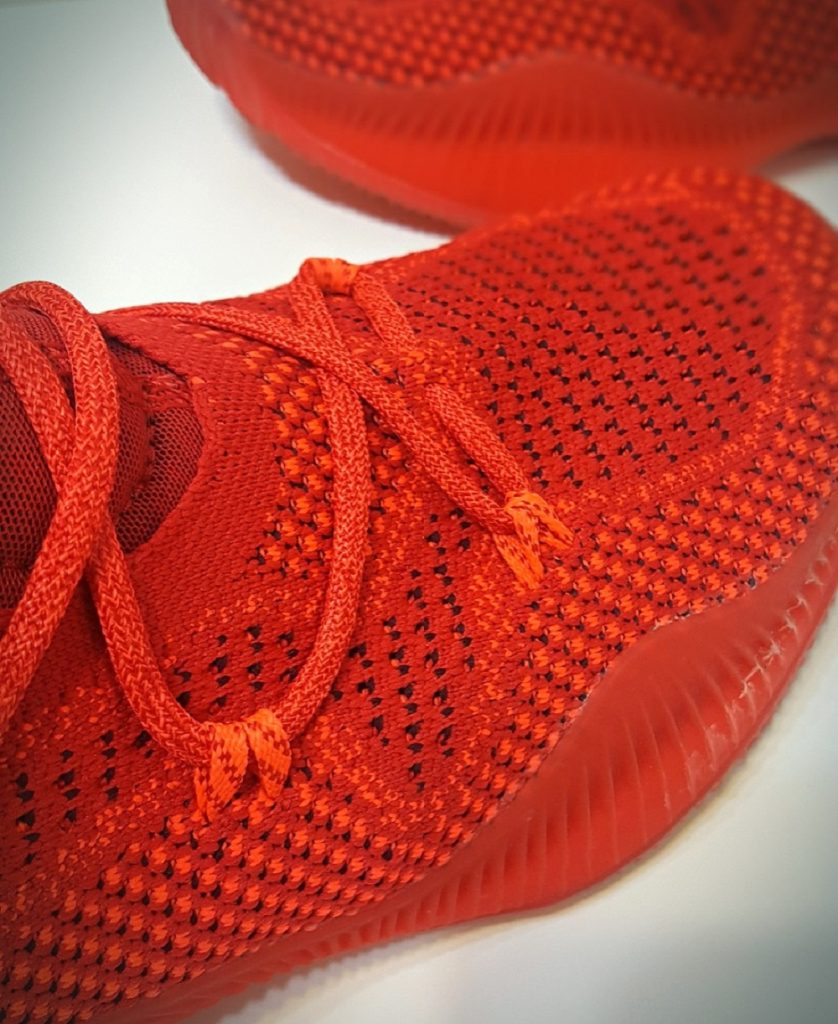 MATERIALS – It honestly gets no better if you need or want a fabric/woven upper. The Primeknit here is flexible and soft but reinforced in high stress areas with a tighter weave. No fishing line disguised as support wire, just woven upper — almost. The parts of the shoe that don’t have the brighter threads (the infrared color) have a nylon backing material behind the Primeknit for a little extra support (the mudguard basically). Those areas are responsible for keeping the foot over the footbed, but that goes into the Support category, coming later.

The Crazy Explosive also features a full length GeoFit inner bootie to form-fit the CE to the foot. For those not familiar, GeoFit is a system of strategically placed pads around the ankle and foot to secure the fit comfortably. First seen on the Rose 1 in basketball (at least by name), the pads aren’t thick but dense and keep pressure away. 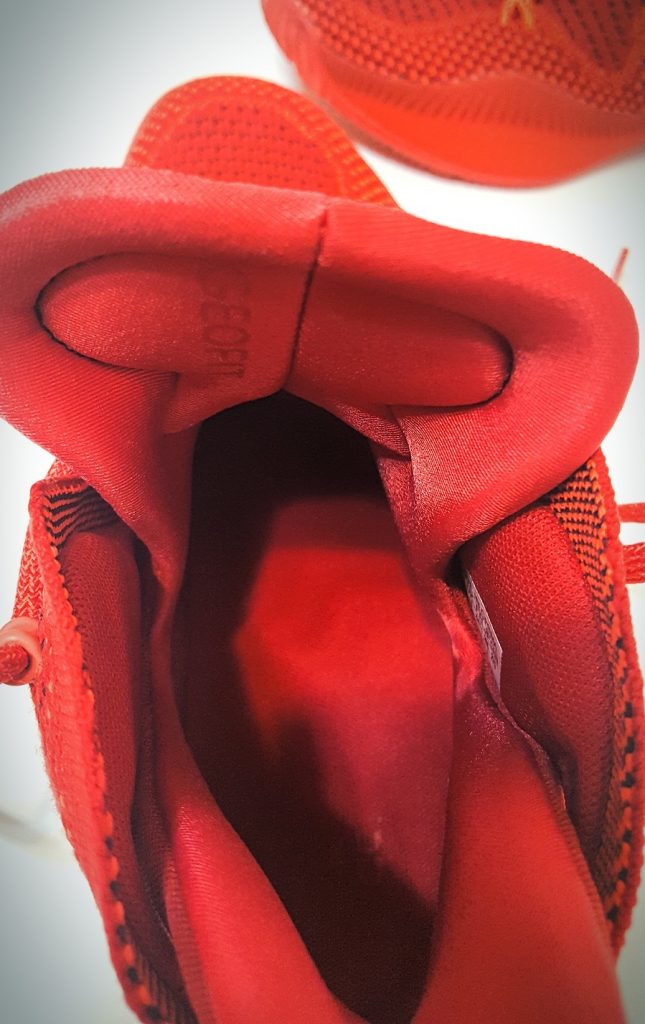 FIT – Speaking of Fit, here we go: while the Rose 7 seemed to fit most people a half size small, and the Crazy Light Boost 2016 fit a half to full size too big, the Crazy Explosive is just right — no doubt thanks to the inner padding, but the wider toe box and feel overall makes the CE more accommodating to different shapes without changing sizes. Being wider, it would almost make sense for the CE to feel clunky, but the form-fitting ‘Knit keeps the shoe flexing easily with no fight of the foot, so even though the fit looks wide, it moves right with your grooves. The ankle and heel are locked in with the combo of the Geofit and the Achilles wrap around the ankle, so even without a really solid heel counter, there is no movement at all in the heel. Best fitting adidas shoe ever? Yeah, exactly. 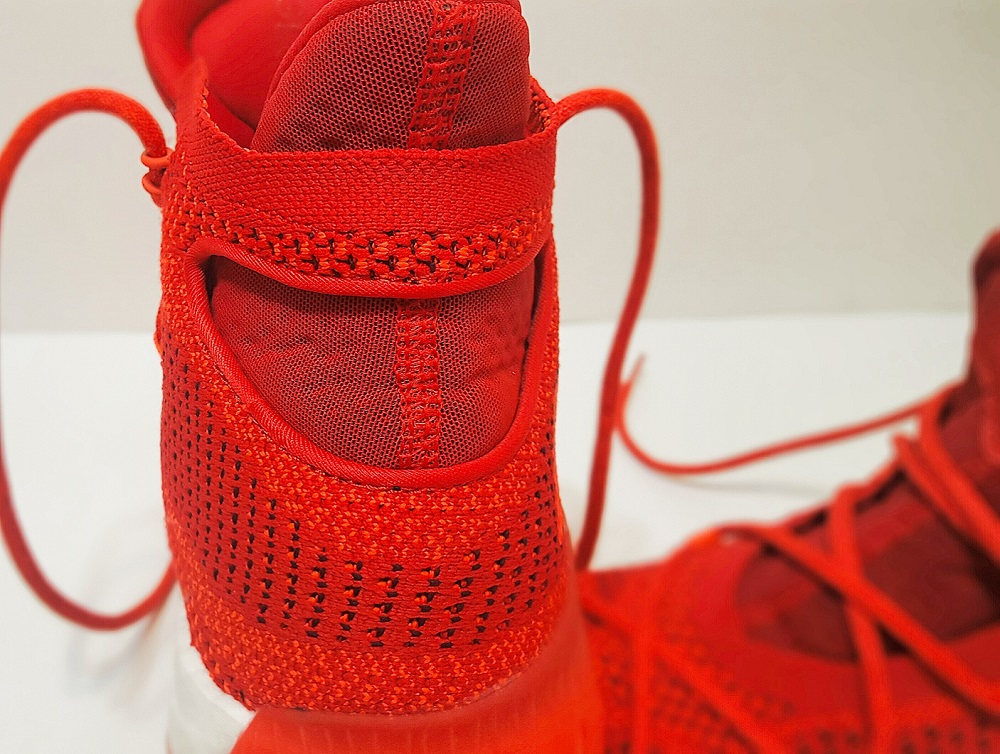 SUPPORT – Primeknit can’t be supportive, right? Because it’s too soft, won’t hold up or contain the foot? Nope. Nuh-uh. Wrong. Like we covered in the materials section, the knit is reinforced in the high stress areas with a nylon back and a tighter weave, so stretch and pull in those areas is minimal. The huge infinity shank under the midfoot (under the whole foot, really) keeps the arch from arching the wrong way. It also helps with transition, keeping running smooth without being too mushy and slow, but also lets the Crazy Explosive bend in the right spots.

The Boost is caged in the forefoot and heel to help with this category specifically. Boost is completely unstable by itself — its foam balls made to rebound off of each other. The cages allow the Boost to compress, to a point, and hold the Boost in shape to keep the shoe from rolling over. This cage also keeps compression from completely bottoming out and pushes the Boost back into shape for quicker moves. If the Boost was allowed to expand outward with no limits, it would take time to recover and slow down the athletes. See, cages are good.

The heel is without a solid counter but the wide base and fantastic fit keep the foot from going over except in extreme cases. 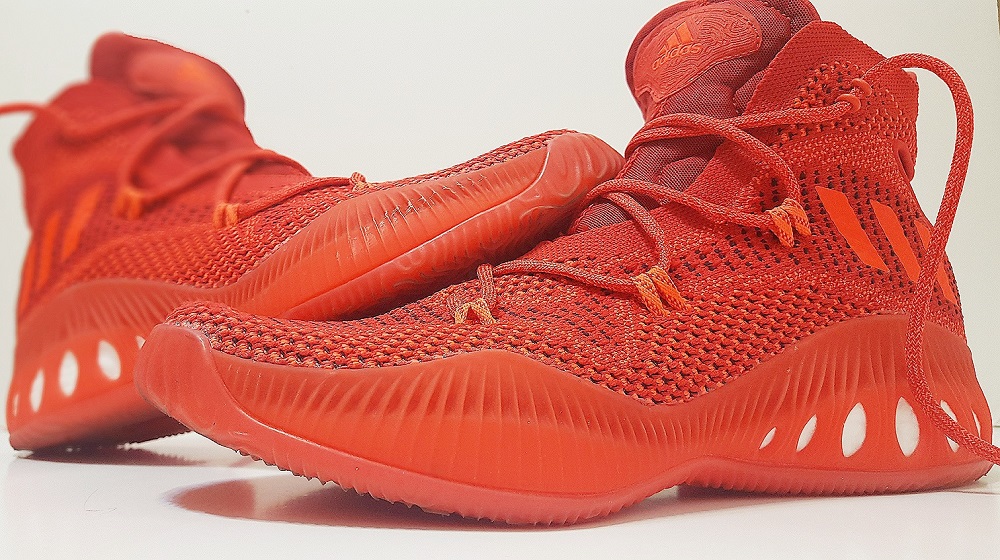 OVERALL – Best adidas shoe ever? Some are saying it, but this reviewer still prefers the Rose 7 (and the Supernatural Creator, but good luck finding those). The Crazy Explosive is definitely on the list of top shoes of 2016 (which is coming soon), and to ruin the list, it is top 5. Perfect materials on the upper, almost perfect cushioning, fit is dead on, and traction is solid on any court. The main thing to hold the CE back is the durability of the outsole – it peels from indoor use after a few wears, so making it through practices and a full season of basketball with one pair may be asking too much.

If you can afford it, and with recent price drops to around the $110 level it becomes an even better value, the Crazy Explosive has everything you could ever want in a shoe, and excels in the pieces, making the whole a great, GREAT shoe. The revival continues for Three Stripes because performance and aesthetics together make for a good time. Blow it up. 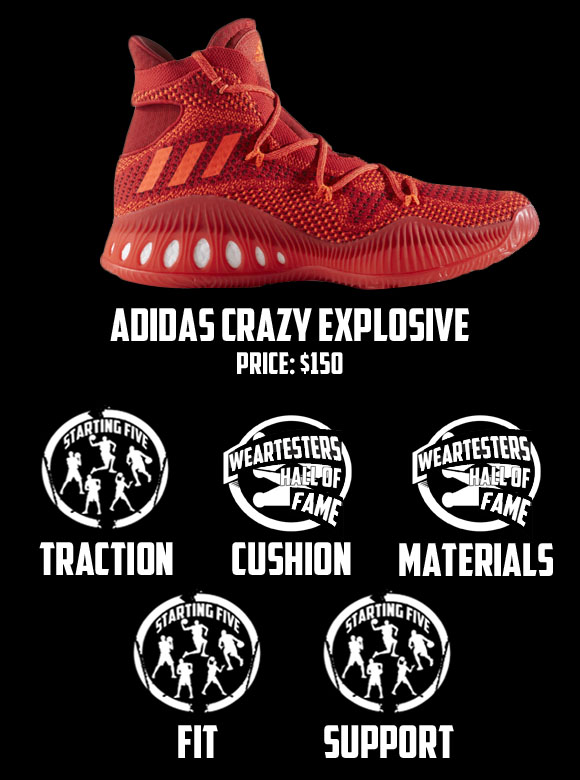