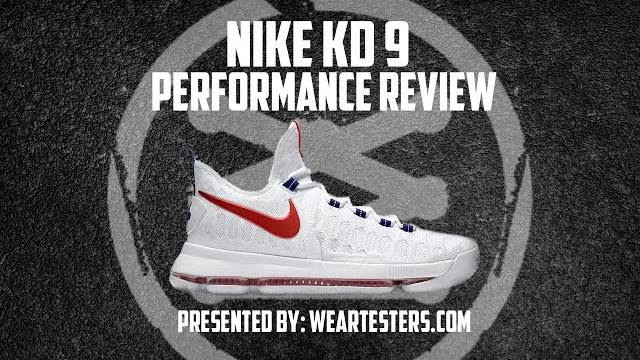 Yeah, this is late. Yeah, the shoe has been out for three months. Yeah, the Nike Zoom KD9 has already been reviewed by everybody. Sorry, but when a shoe is this good it deserves all the praise it can get. Yeah, I just ruined the review for those of you wondering about the final overall opinion. Who cares — read up and enjoy… 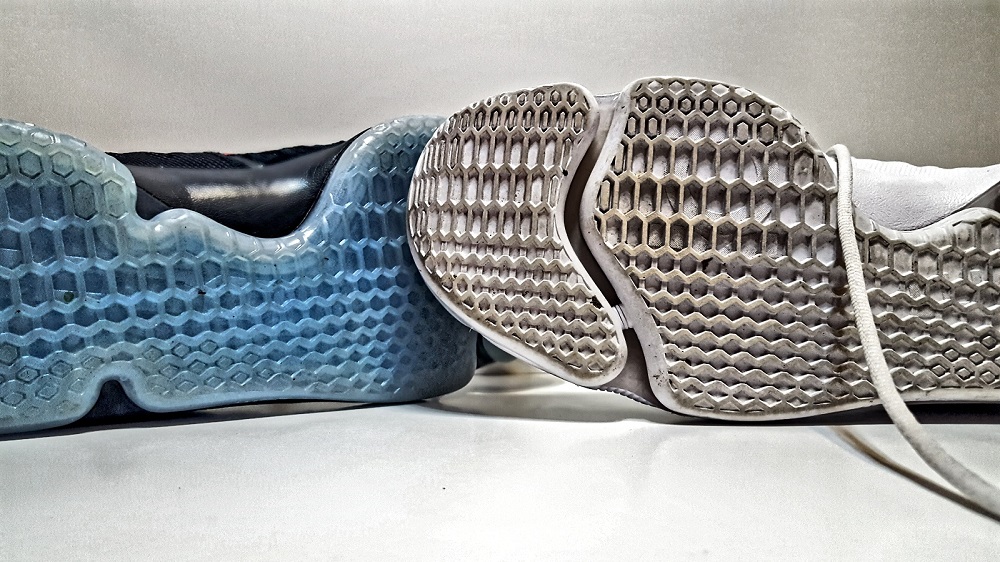 TRACTION – For this review, two different shoes were used (the reason for why this lagged) in order to test two outsole options: the translucent option featured on the ‘Gold Medal’ colorway and the solid outsole of the original ‘USA’ colorway. On clean floors, both provided some of the best traction on the market — grippy, sticky, durable indoors, and doesn’t hold much dust due to the honeycomb cells being wide open. On semi- to really dirty courts the translucent stuck but had to be wiped frequently. The solid was good, no matter what nasty, grimy courts they were tried on. Outdoors? The solid will last a little longer, but probably not much, and once you wear through that rubber you are playing on Zoom bags. From a cushion standpoint, that’s great, but for traction, Zoom bags suck. 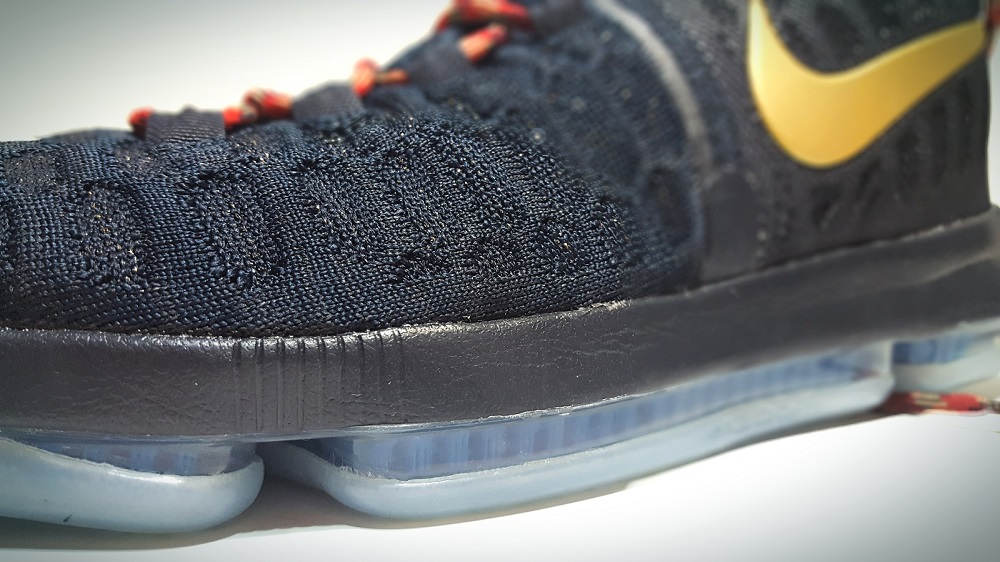 CUSHIONING – Thank you, Leo Chang, or whoever decided to use REAL ZOOM in this year’s Nike shoes. When given Zoom bags like these in the HyperRev 2016 and the Hyperdunk 2016 all is right in the little court in my mind. This is the bouncy, responsive, energy returning Zoom that was supposed to be; there are no Phylon-encased quarter bags or not-really-there dime bags (Kyrie 2, looking at you) — just pure, unadulterated fun bags. Some have said in other reviews that the bags had a lag time, that lateral response was a little slower due to the softness of the bags. Nah, not really. Up and down the court is so smooth, running off cuts and screens is easy, and staying in front on defense was not a problem.

This setup is way more flexible than previous Max Zoom units and the bag didn’t leave feet hurting or tired from overworking to flex the midsole. And the separated units in the forefoot are magical; the flexpoint sits just at the foot/toe joint to roll into steps and jumps. Dang perfect. 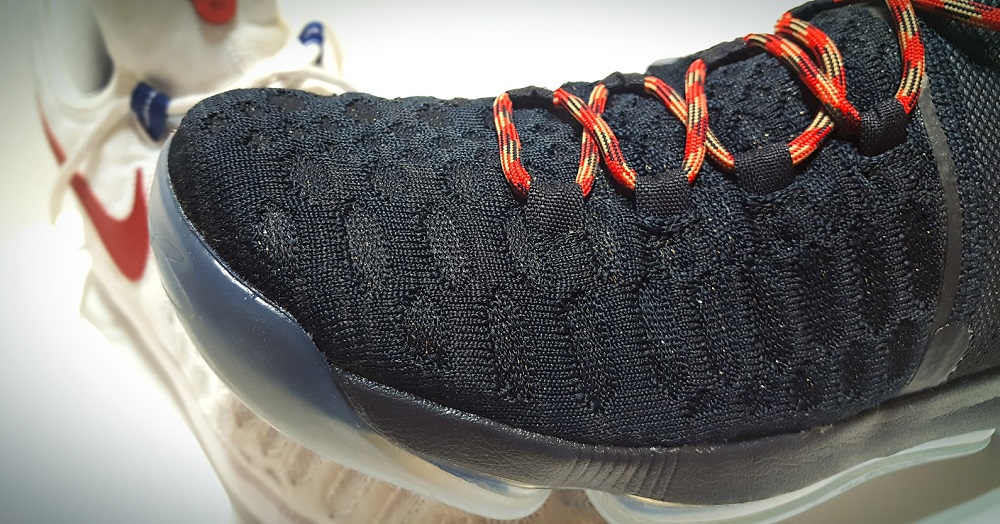 MATERIALS – Look!!! Nike put Flyknit on a basketball shoe!!! Oh, the Kobe series already has it? No, it doesn’t, at least not like this. True knit is flexible, comfy, and requires no break-in time. The KD9 completes the trifecta, but by a nose — it only has the knit in the forefoot and midfoot. No hotspots, no rough edges, and surprisingly, it keeps the foot on the footbed. The tighter overlay cross-pattern provides the hold by keeping the lateral stretch to a minimum. It isn’t as solid as a fuse or synthetic upper but slipping around in the shoe was never a problem while playing.

The heel is a mesh/fuse material which is nothing new, but it gets the job done. One question: with the solid internal/external heel counter, which does a great job in stability, why not go Flyknit all the way? Maybe on the KD10? 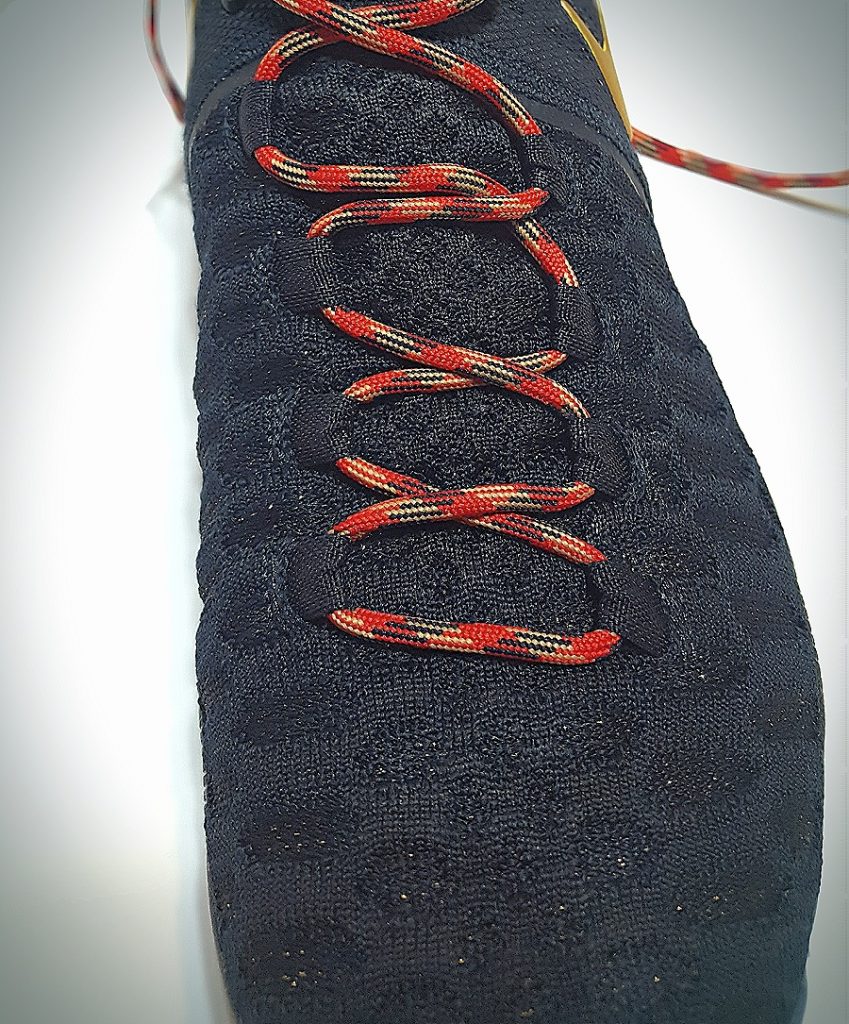 FIT – Ahhhh, now we get to the “problem” area. This is, by far, the most debated shoe, as far as sizing is concerned, in 2016. When wearing the ‘USA’ pair in my true size of 10.5, I almost pulled my shoulder out of socket getting them on. I don’t think I have wide feet (no Shrek in the building) but the collar would not let me in. But if you keep working you’ll eventually get it in (so. many. jokes.). The 10.5 would have probably worked, but an 11 felt way better on the piggies.

A note: I do like about a thumbnail width at the end of the toes for some comfort space. Once on, and with that little extra room, magic happened. You don’t even need the lace loops, just yank and go (again, jokes). The heel has extra padding just below the topline of the ankle collar and the placement cuts slip completely off. The midfoot area is a little tight where the mesh meets the knit, and it does not stretch, so if you’ve got the fat feet you are in trouble. The forefoot Flyknit wraps perfectly and believe it or not, keeps the foot over the footbed on just about every move. 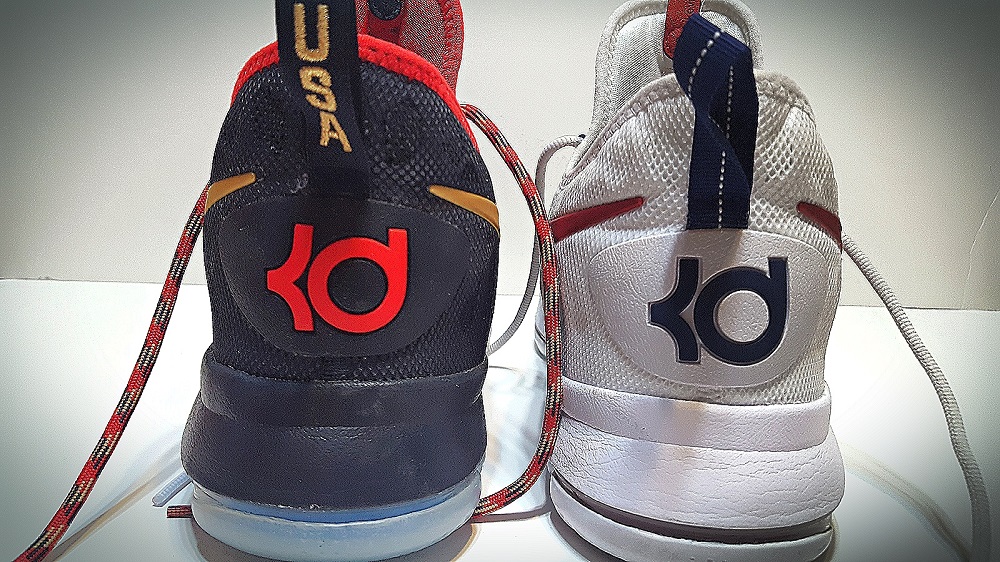 SUPPORT – Basically a sock with a sole, so support structures are not at the front of the design ideas here, although the fit helps. There is an internal heel counter under that KD logo that does a good job holding the heel in even though the lacing system stops low on the ankle. The base of the shoe is wide, especially for a KD shoe, so the stability side to side is on.

The Phylon midsole is sculpted under the arch for a little stiffness there and the Zoom Max is cut away in that area to keep that sinking feeling away from that area. For someone with foot problems, and looking at the KD7 and 8, the support on the 9 is surprisingly light, although KD did say his shoes are designed for the now, not what may happen, or to prevent something later from injuring. 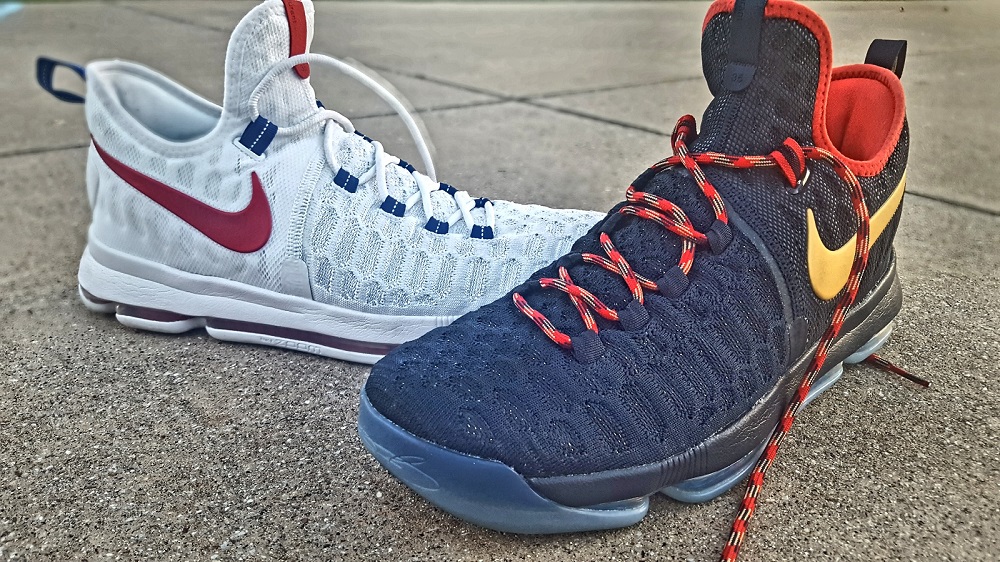 OVERALL – Best. KD. EVER. Seriously. Besides a little less support than some need, there are no problems with this shoe. Traction — excellent. Cushioning — beyond excellent. Materials — the best Nike has to offer. See a pattern? Actually, this is the best Nike shoe in years.

Hyperbole? Exaggeration? Maybe, but the KD9 just shows what the Swoosh can still do when it wants to — make killer performers with comfort that look okay off-court (in a few years this may be a killer casual retro). If you want the best Nike has to offer, look no further: the KD9 is all you need to know. 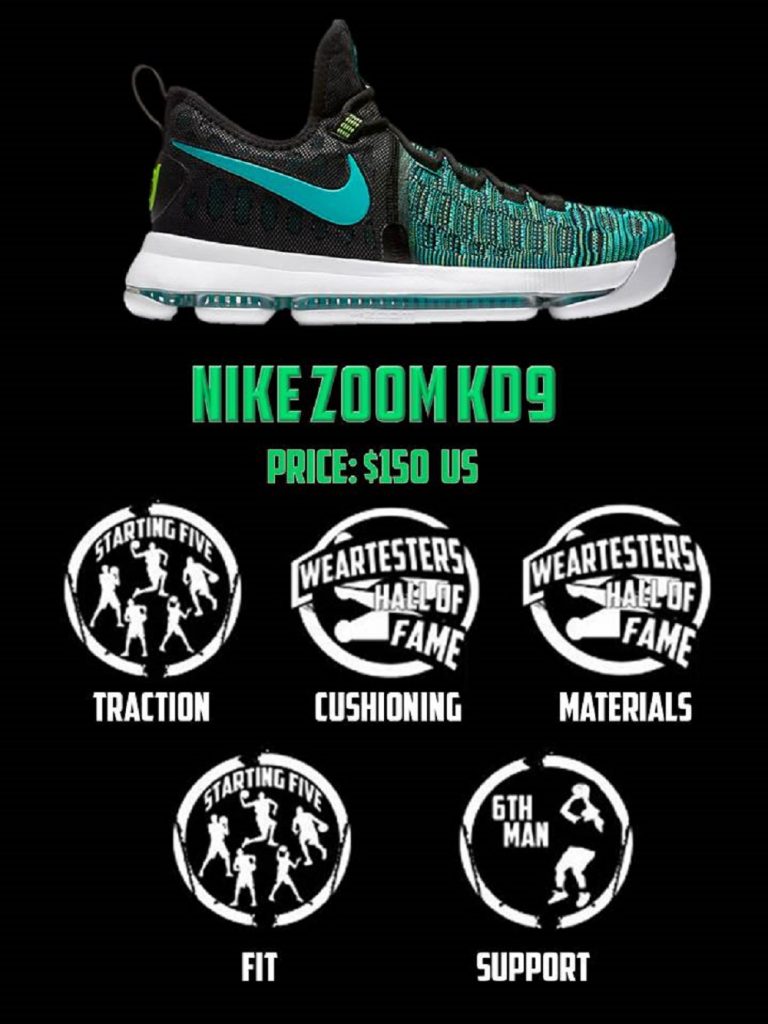