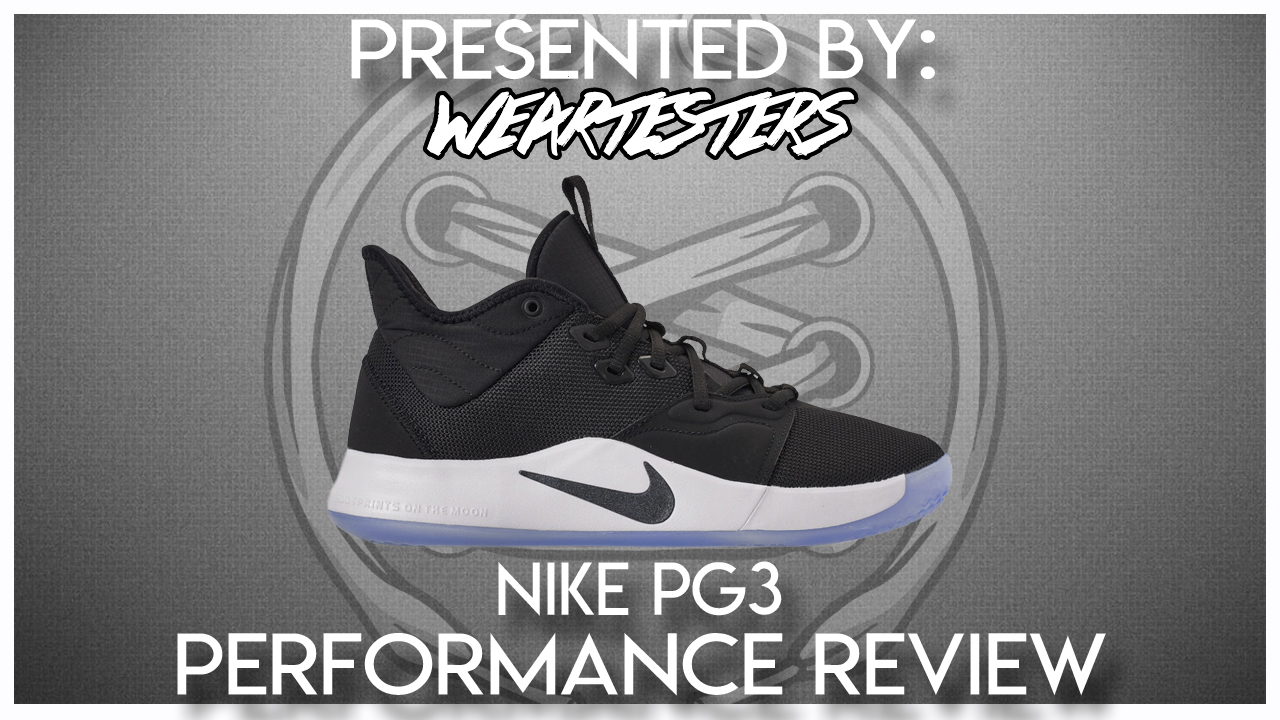 Paul George is a beast – that much can NOT be debated. He may even be the MVP of the NBA. If so, will the shoes be the reason? Possibly. Welcome to the PG3 Performance Review coming in 5…4…3…2…

Well, why wouldn’t little suction cups work? The PG3 traction stuck like glue on every surface and court I played on. I don’t want to say it was perfect, but it was real close. The best thing? I don’t think I wiped but maybe 5 times during the whole testing. The cups are spaced far enough out that dust doesn’t really clog anything up and the openings of the holes don’t really have a surface for the dust to stick to. The other best thing about the traction? It’s not harsh or “too grabby” – it is a smooth stop that lets your foot release into the next step without hanging onto the floor. I really noticed it when playing full court and pulling up off-the-dribble for a three pointer. Some shoes will grab the floor so hard the upper will fold from the stress (this could be a containment issue as well). However, the PG3 stopped smooth and allowed my foot to naturally lift off. That makes sense, right? Bottom line – it’s just a really good design.

As for durability, the NASA colorway has a solid rubber outsole that so far, has been durable indoors. A little wear is showing under the ball of the foot where the high-torque happens but for the most part, the pattern is still intact. Outdoors? Nah. The circles are shallow and that rubber isn’t the hardest, so I don’t think you will be happy in a couple of months.

One thing has been consistent in the PG line – large forefoot oval Zoom units. The PG1 was bottom loaded under a stiff Phylon and it took a few wears for the foam to soften a little. The impact protection was still good but could have used a little more bounce. The PG2 went to a top-loaded unit right under the insole and strobel board – this meant the Zoom could be felt and response was better. However, there was still the stiff Phylon in the heel. Enter the PG3 – same top-loaded Zoom unit as the PG2 but with a noticeably softer Phylon carrier/midsole. Don’t believe me? Put one on each foot and see. The Zoom unit is one you can absolutely feel and the response while playing is quick and immediate. Whether on offense driving through the lane or defense and staying in front of your man, the PG3 lets you explode into your movements with no delay.

The downside of foam that starts off softer is the longevity and durability. After one wear, the midsole was looking like “Bad Grandpa”. Aesthetics don’t bother me, I prefer some creases and wrinkles, but the more foam compresses and wrinkles, it means it isn’t bouncing back and the midsole’s life is slowly draining away.

Ooooohhhhh, this isn’t good, at least initially. The materials on the PG3, at least the NASA colorway, are a heavily-glued mesh with a nylon backing for the main structure. The forefoot wings are a nylon synthetic and the silver ankle material is space suit. Seriously, it feels like it should be in a museum with “ARMSTONG” stitched on the ankle. It reminds me of my first ever pair of Nike’s – 1985 silver nylon Nike Vandals, bought for $14.95 in a small town in West Texas. That was actually why I had to grab these – I love some nostalgia. The heel is a thin Durabuck that adds a “premium” touch, with different patches for the different space programs stitched in (the programs depend on the size – my size 10.5 has the Apollo 15 patch). All in all, not an impressive shoe – in hand. However…

The materials work. They are soft enough that the upper forms and feels great on foot after a couple of break-in games. The wings have almost no stretch due to the materials so they hold the foot down. The ankle still looks and feels funny but it has no effect at all on the performance. So yeah, overall, the materials aren’t premium or even really nice, but they work great on-court and are durable enough to last.

The PG series has already become known for snug fit, especially if you are even slightly wide of foot. The PG1 had wearers going up a half-size almost universally while the PG2 was better but still a little tight and the PG2.5 was back to half-size up (must be the strap). The PG3 starts off just like the PG1: way narrow feeling and stiff but breaks out of the shell in about 2.78 wears (rough estimate). The wings aren’t as restrictive as the PG1 or 2.5 strap – they are actually completely independent – allowing the forefoot to be loosened and tightened as much as the mesh will allow. Once broken in, the upper hugs and conforms almost perfectly.

Heel slip is a non-issue as the interior of the area is heavily contoured and padded. The lacing comes high enough to really pull the foot back into the heel area, taking advantage of the stiff heel counter. The opening for the foot looks wide but it is deceptive – it’s just an elf collar.

As far as length, stay true to size. The length gave me about a half inch from the end of my big toe to the end of the shoe, which is just how I like them.

Not much. The wings on the forefoot do lock you in for any lateral slip-and-slides, keeping your foot on the footbed on the harsh cuts. The lacing system locks you into the heel, solid and stable. So far, no problems, but that’s about it. This is a fast, quick, low-top feel and built for mobility and speed. It isn’t bad, but for those looking for a Lebron/Soldier/Jordan 33 shoe, keep moving. There isn’t even an outrigger, but given the support wings and the way the midsole rises up at the midfoot, you are solid underfoot. Honestly, this is a case of the sum being greater than the parts, where the whole shoe works well despite not having any built-in structures to push it over the top.

Best PG shoe yet? Hard to argue, honestly. The PG3 has great fit, almost-great cushioning and great traction. Yeah, the materials are low-end for a signature shoe, but they work. The support isn’t built for really big guys, but it’s not terrible. Here is what the Nike PG3 is – a really good option for a team shoe, just like the PG1 and PG2/2.5. It is an any-position, do-everything shoe, for the do-everything player. That make sense when you think about who the shoe is built for: quick, bouncy, slashing players or even a spot-up shooter who plays some defense and rebounds.

It’s a great shoe for anyone looking for a, well, shoe. It’s a fun ride, with the only frills being the multitude of colorways we all know are coming. Paul George may not be the NBA MVP this season, but it for sure won’t be the shoes’ fault.