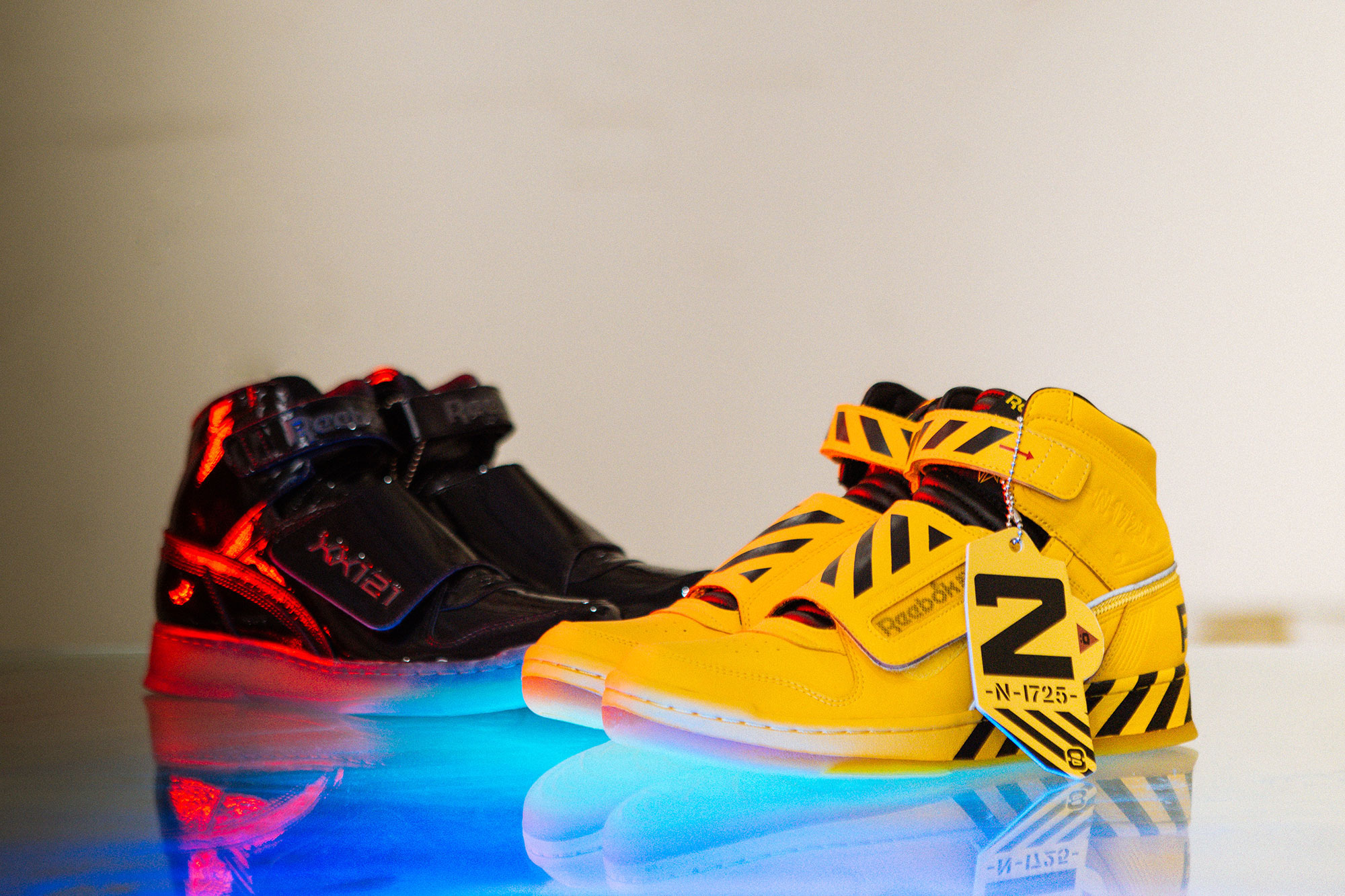 After announcing the launch of the Alien Stomper ‘Final Battle’ pack on Alien Day (4/26), Reebok is ready to unleash the pack.

Today, from 10am to 9am ET, the Reebok FitHub in Union Square will be pre-selling 50 of the packs (unisex sizing 4-13). Customers will receive custom Alien-inspired pins  as a gift with the purchase and have the opportunity to pick up limited edition numbered unisex t-shirts inspired by the Alien Stomper. There are seven designs to pick from.

At 12pm ET tomorrow, July 18, the Alien Stomper ‘Final Battle’ Pack will hit Reebok.com and all Reebok Certified Network and Affiliate accounts for $325 in unisex sizing. The pack’s release date coincides with the original launch date of the film Aliens.

I caught up with both designers that worked on this two-part pack, Chris Hill and Xavier Jones, to discuss how the Alien Stomper ‘Final Battle’ pack came to be and the intricacies of a grand endeavor like this one.

Chris, at the unveiling of this special project between Reebok and 20th Century Fox you mentioned that there were hundreds of man-hours spent working on both the packaging and shoes. Please, tell me about that.

Yeah, there were 300+ hours put into the design of the box alone. I didn’t count footwear design hours because that’s not something I usually do and at the time we hadn’t planned on adding a box. But the box seemed never-ending so I started counting.

The brief for the box came in after both shoes were cooked for the most part. I designed the box for the OG release so this came my way as well and I was told just make something cool. Reebok has never done a double box before so I had to design that, how it opened, the paper thickness, dimensions, grommet finish, etc. It’s completely custom — I wanted to add red lights when you opened it but I figured that was pushing it.

I started off coming up with different concepts and aesthetics. I rewatched all four Alien movies for ideas and inspiration. I probably could have just watched Aliens but I why would I do that when I can watch all four back to back? I probably watched Aliens three or four times and once I decided to theme the box on the final scene I paused every still of the final battle so I could recreate the icons, type, and logos as accurately as possible. I did a lot of online research, the Alien wiki page, fan forums — I referenced the toys and read some of the comics for illustration reference. 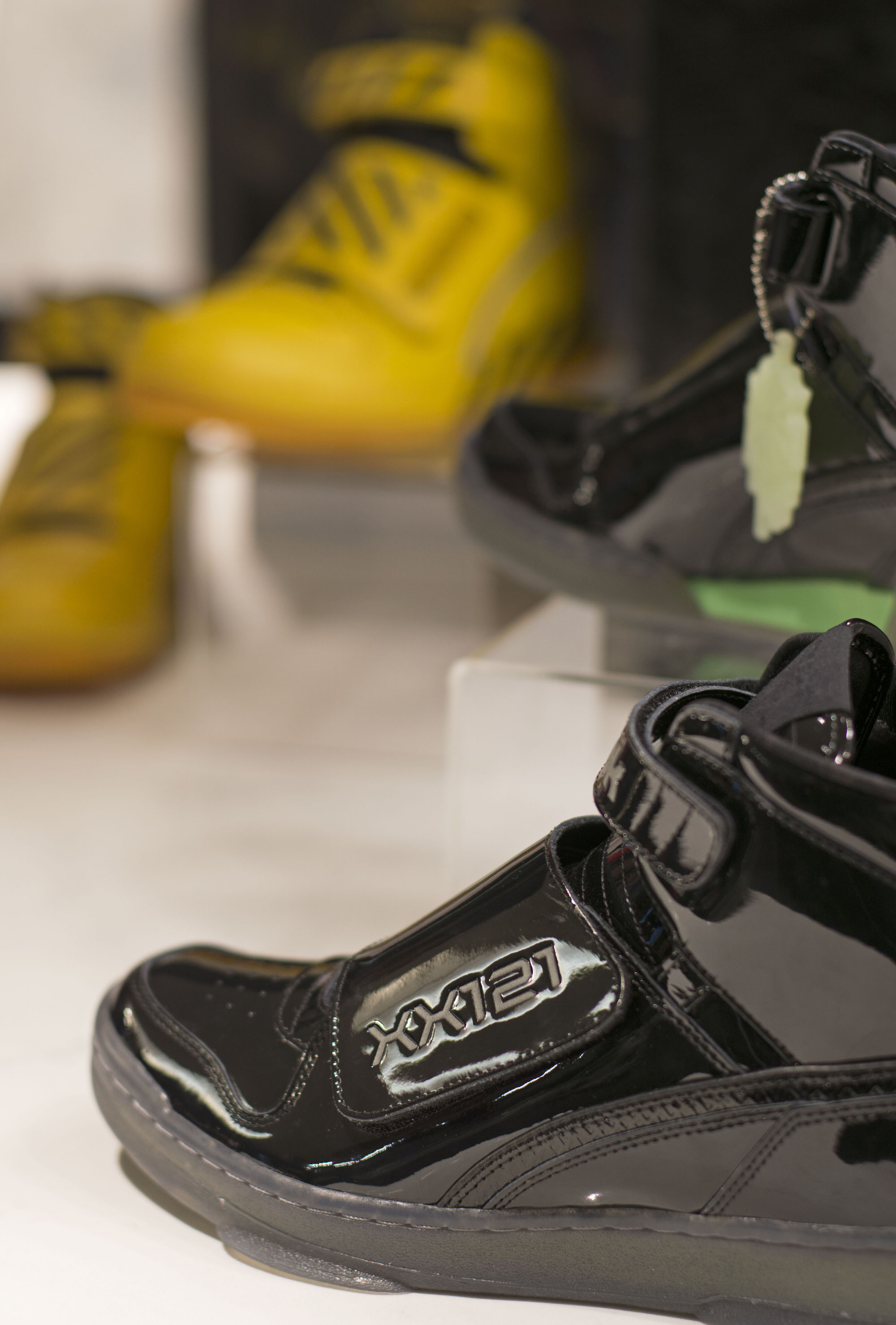 Once I finalized the concept, which was inspired by the loading dock door and bay area where the final battle takes place, I mocked it up in Photoshop and pulled in my brother, Jon Hill, who worked for me at the time, and my apprentice Alejandra Bucco to divide and conquer. All of the icons on the exterior box are either directly from the final scene or play on words from the final scene so if you look closely you will find a lot of hidden gems/easter eggs.

I think there are 50 or more hidden details in the entire box, the date the film released but in UK format as a nod to Weyland, the iconic acid blood eating through the box and altered recycling info to name a few. The exterior is CMYK printed with multiple foil hits and debossing details. The majority of the inner boxes were hand drawn then taken into Illustrator, the hive, the typography, all of it.

The inner doors have the final battle scene hand drawn and rendered, which took over 100 hours alone and required Sigourney’s approval to use her likeness. She wasn’t impressed with the first rendition of her so we had to redo just her face weeks after we handed off the final design.

The script on the innermost part of the box is actually from FOX, which is different from the version you find online. This is the real deal Holyfield… 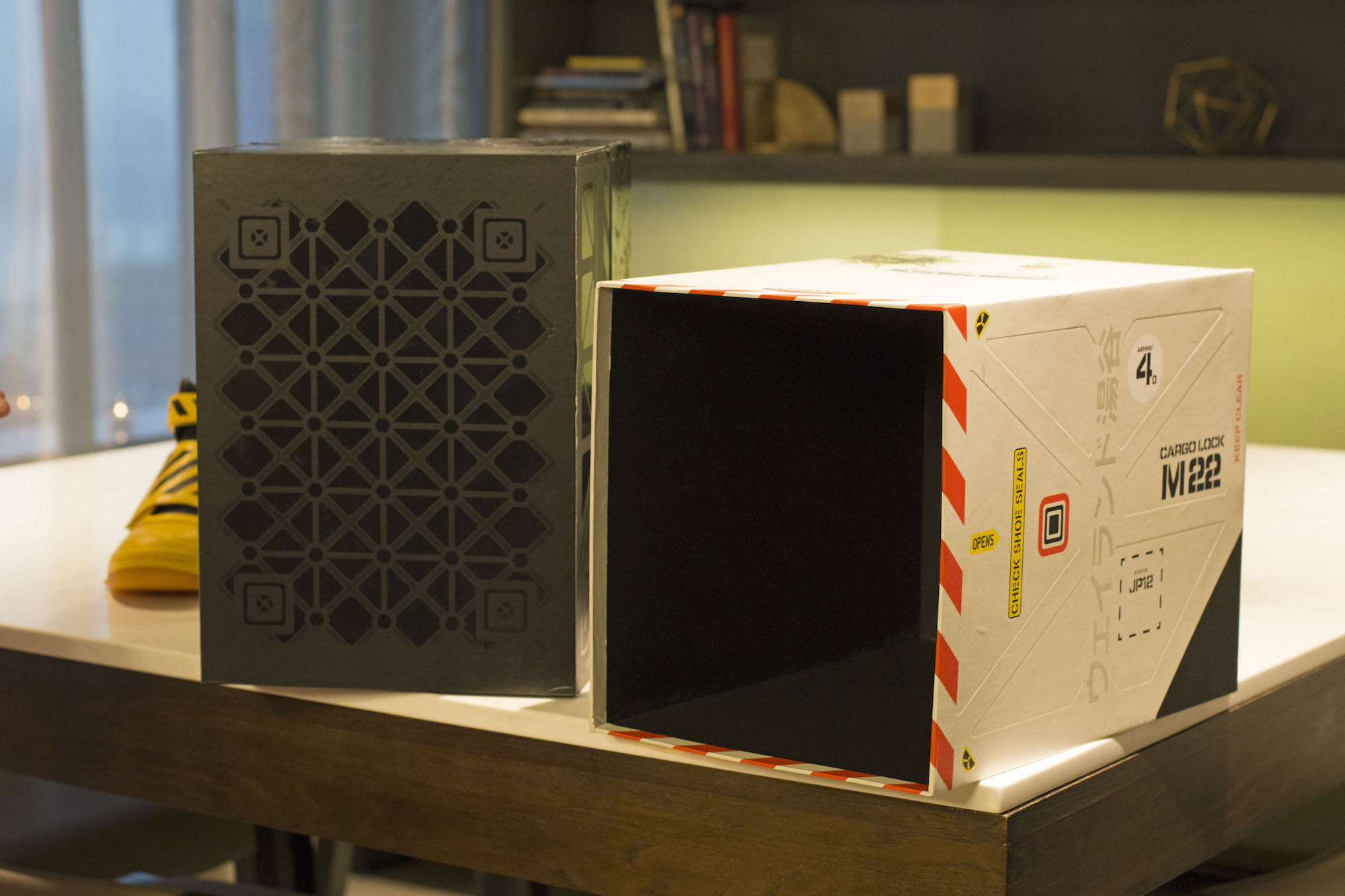 You co-designed this pack with Xavier Jones, a Reebok designer. How did y’all decide which shoe each designer was going to work on?

Well Xavier was actually briefed the yellow shoe first and at the time that was the only piece, there was no second shoe or box. It was presented to FOX, they liked it, but asked what else we were going to do. The OG release was wildly successful and had two different boxes so FOX wanted to push this release further. I had worked with FOX in the past and we had a good relationship so they asked if I could mock up another option.

I was pitching doing a Queen shoe since before the OG bring back so it worked out perfectly. Most people don’t know this but the entire tooling of the Queen shoe has a hidden glow in the dark acid blood graphic on it. We presented both options back to FOX and it was unanimous that we should do a two-pack this year. The story was easy and authentic so it was a no brainer. We handed off the shoes and then the PM Josh Yucius and I met about doing a box for each shoe. He had the idea to do one double box and the rest is history.

Are you an Alien fan Chris?

I’m a huge Alien fan, — I’ve seen all the movies multiple times even the Alien vs Predator series and I have a few collectables. I wasn’t allowed to watch the movies as a kid because they were “horror” flicks. I saw Alien anyway one late night after my parents went to bed and I was scared everyday of my life that a chest burster was going to pop out of me at any moment. It was a perfect mix of alien sci-fi and horror genres and Giger’s Alien is the most iconic alien of all time. It was so scary but so well designed and original.

Xavier, please tell me all about the Alien Stomper you designed for this pack.

My Alien Stomper was inspired by the Caterpillar P-5000, also known as the Powerloader. The machine was famously used by Ripley in the fight against the Queen Alien. My goal was to take the iconic characteristics of the machine and to scale it down into shoe form.

When you first pitched your shoe to FOX, how was it received? Were the suits impressed?

I believe so! After I finished my design I sent it over to Josh Yucius (Global Product Manager). Within a week or so he told me that Fox loved it and that we had the green light to continue the project. So we were all pretty pumped! 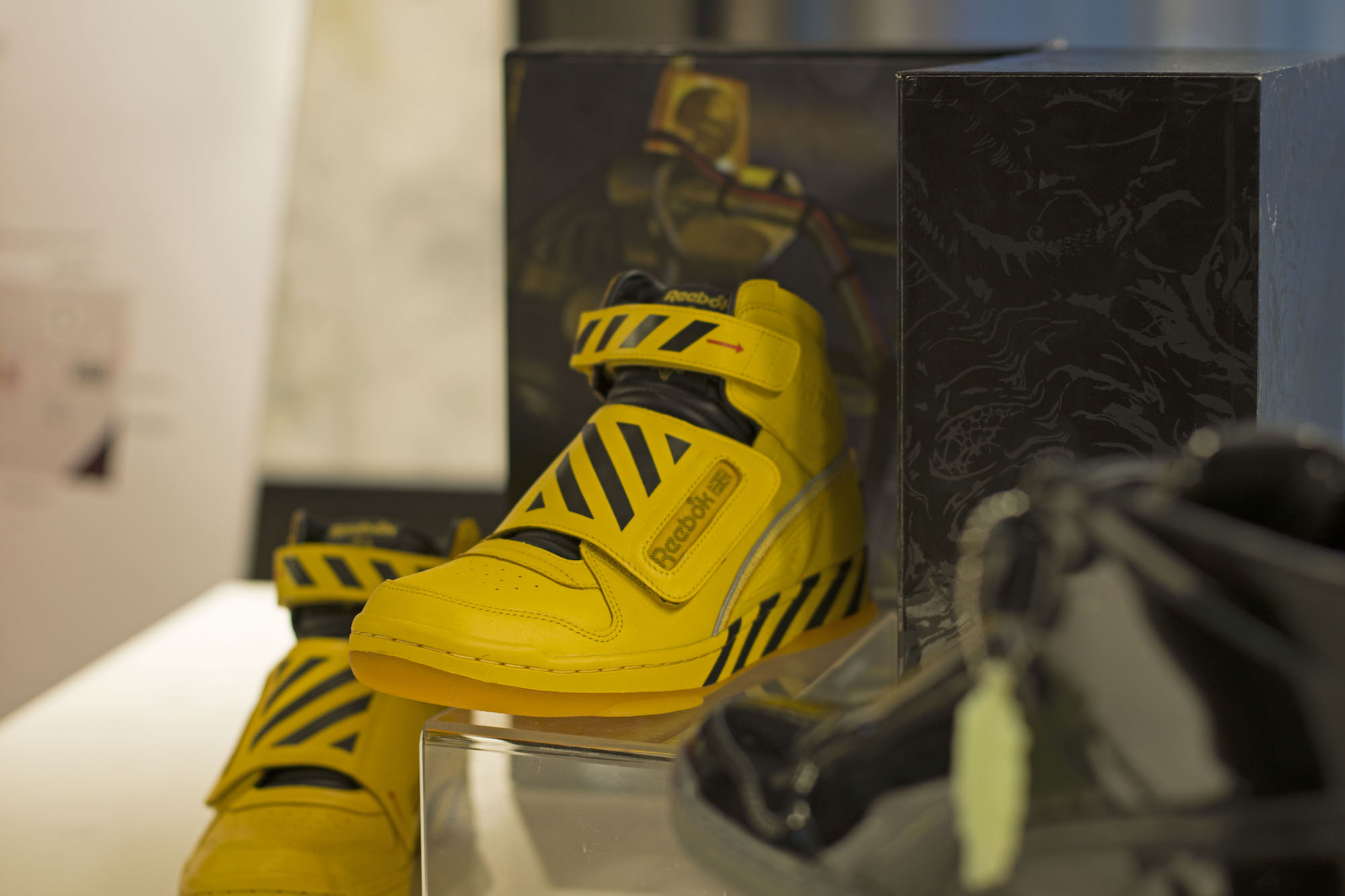 Are there hidden details on this shoe that enthusiasts will spot but I might have missed?

Yes! it’s a few details that enthusiasts will spot. Like the serial number on the collar of the shoe, which references Ripley’s Powerloader. As well as the red arrows on the straps that signify motion, which were a nod to arrows found on the Powerloader’s hydraulic systems.

It was a great experience! I’m extremely blessed and humbled to have worked on this project! I think this pack will be amongst the great treasures from Reebok when we look back a few years from now. 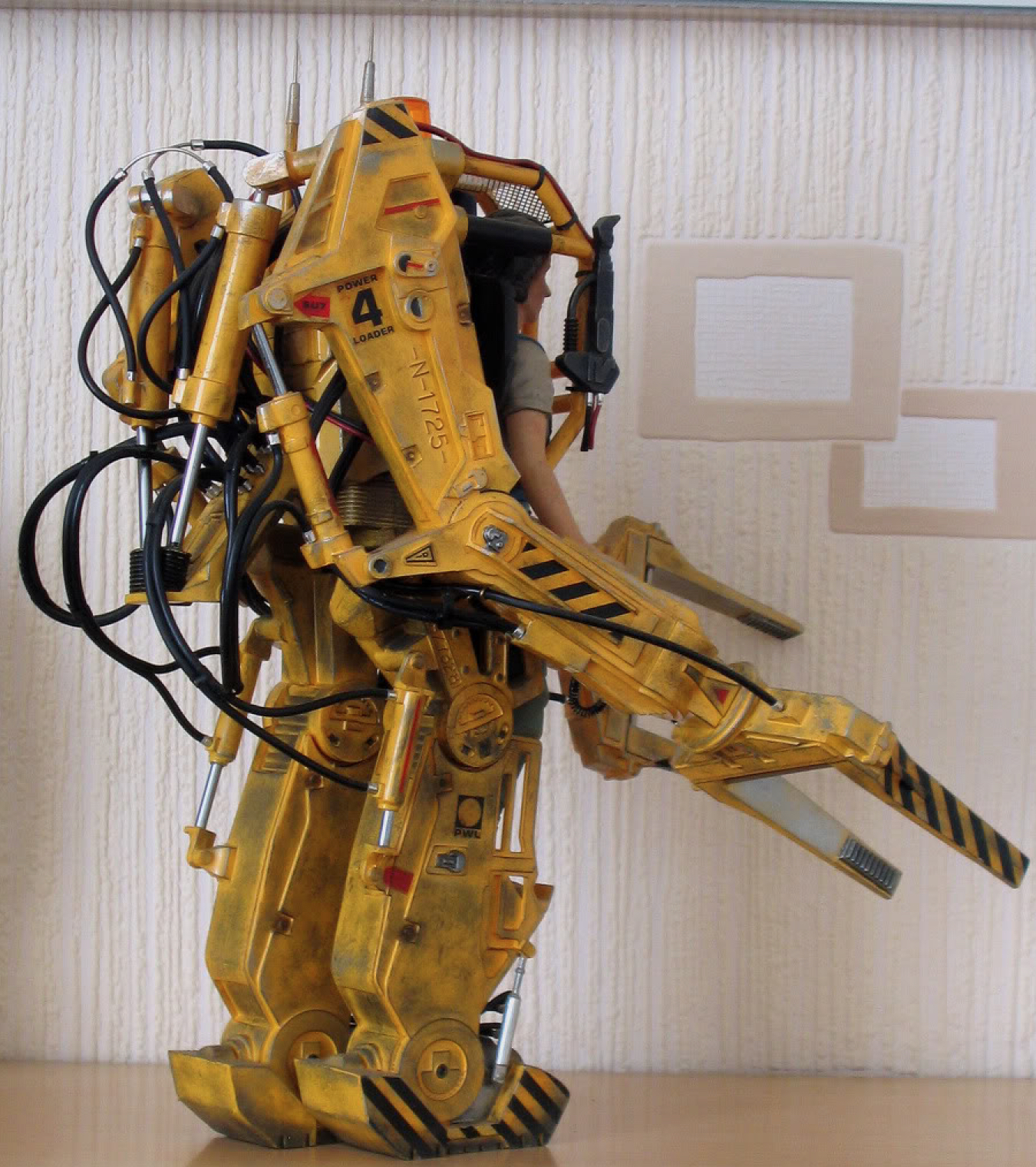 Are you an Alien fan Xavier?

Honestly I wasn’t too familiar with Alien prior to the project. My introduction to the franchise was Alien vs. Predator when I was a kid, but this project definitely got me up to speed. I did lots of research and watched the original film a few times to understand the significance of the franchise. It was so ahead of its time and pushed the boundaries of sci-fi. So I would now call myself an Alien fan!

The Reebok Alien Stomper ‘Final Battle’ pack is extremely limited and feature tons of hidden details for hardcore fans. Check out the images below and let us know if you’re feeling this unique Reebok project. 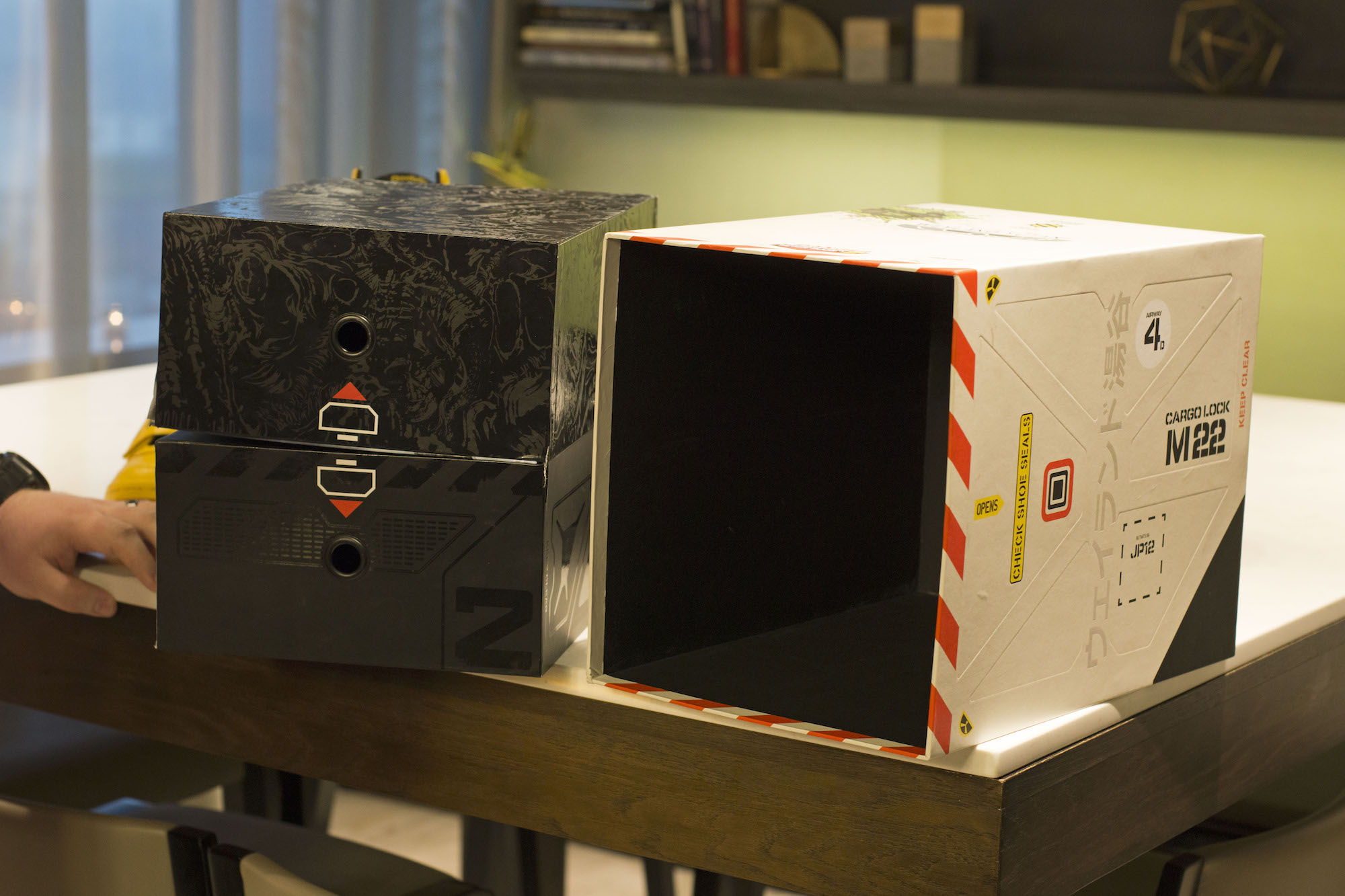 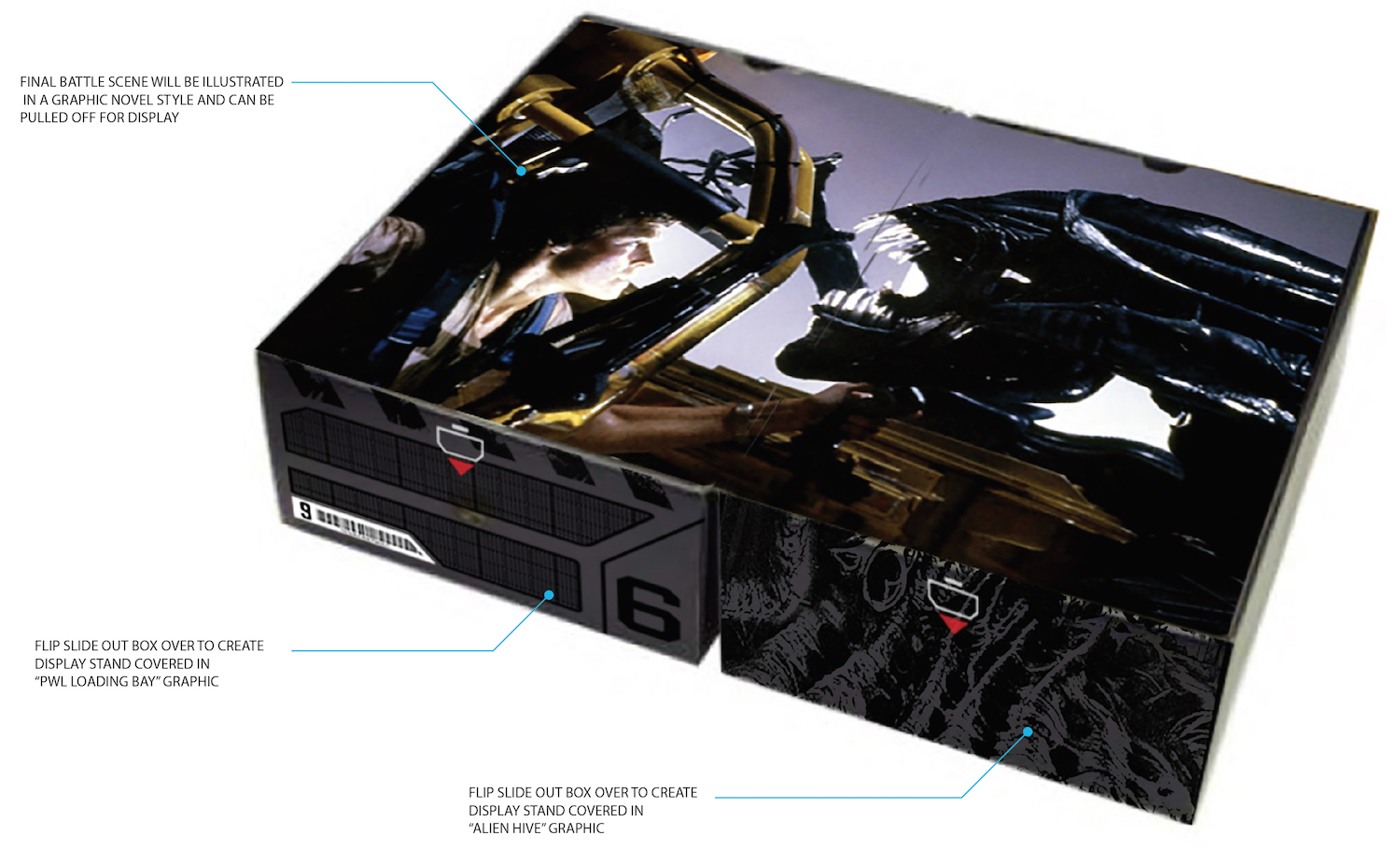 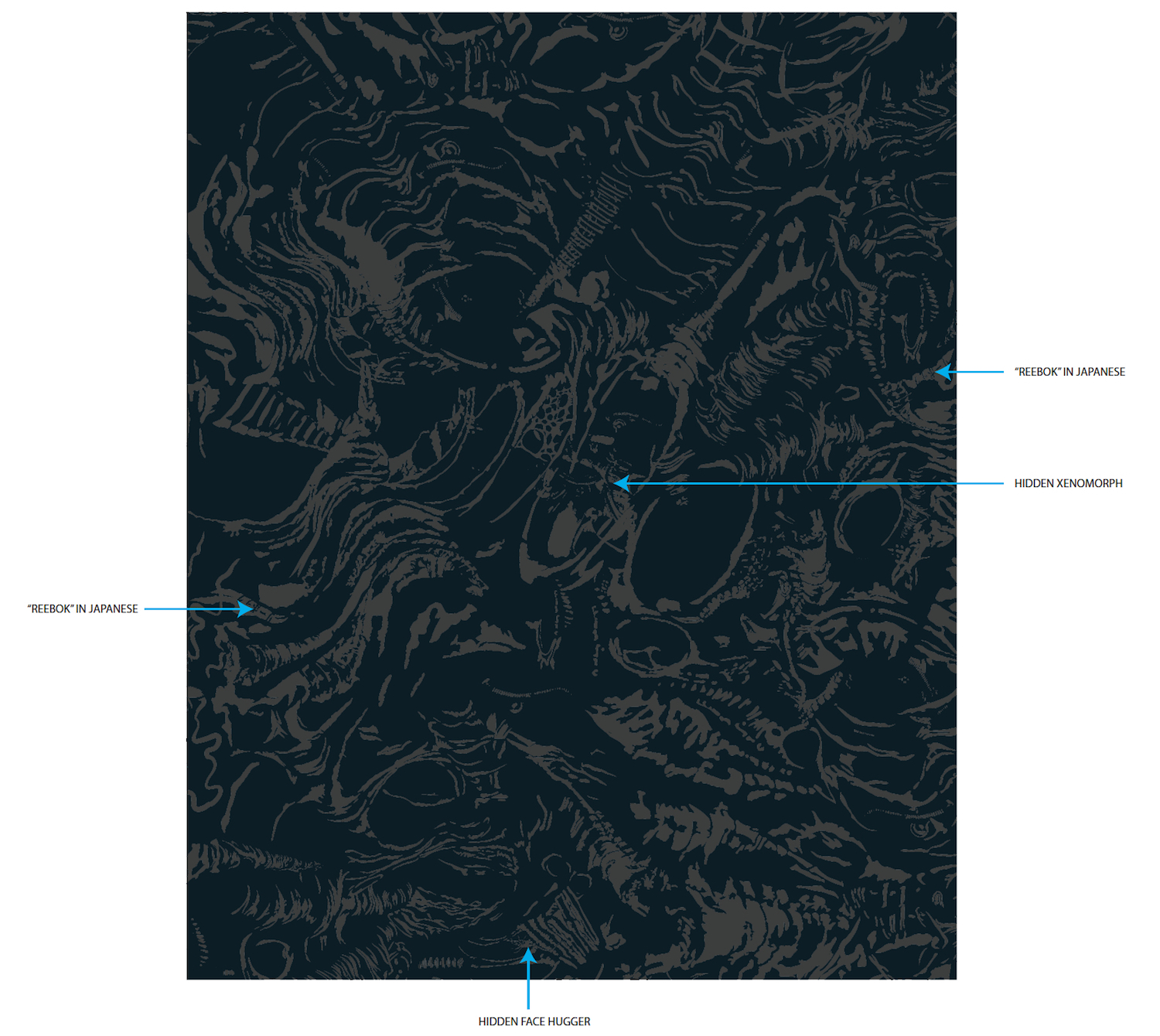 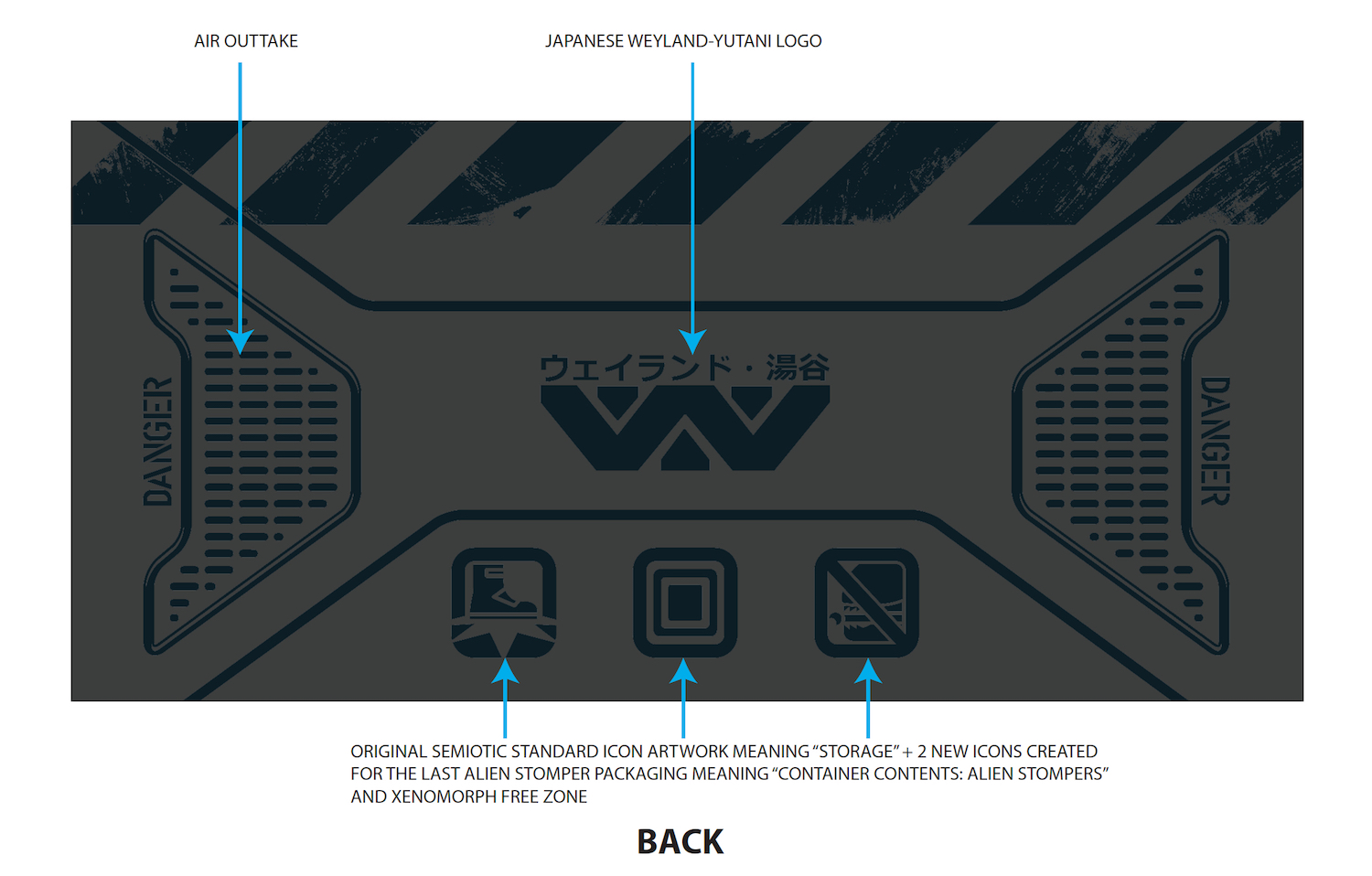 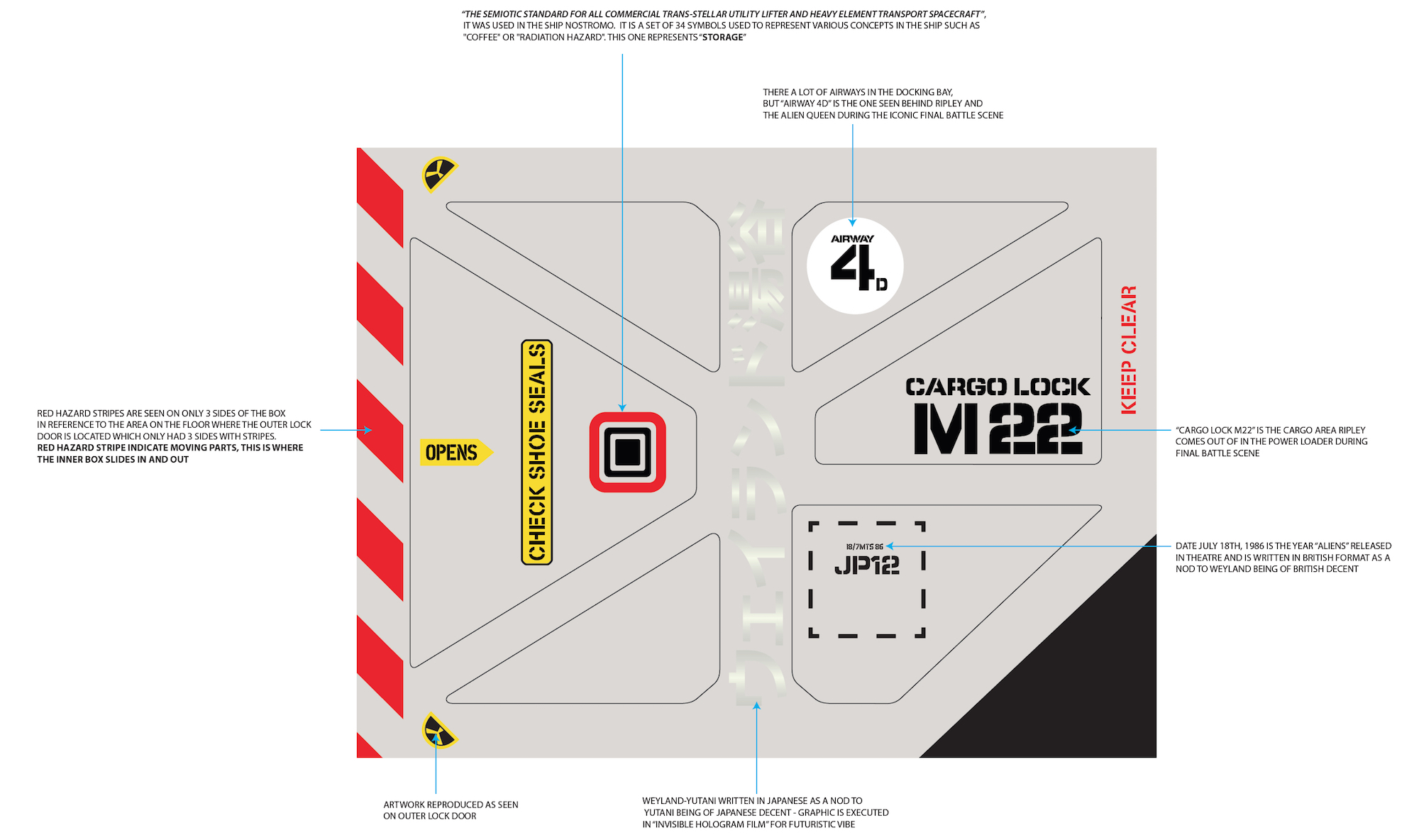 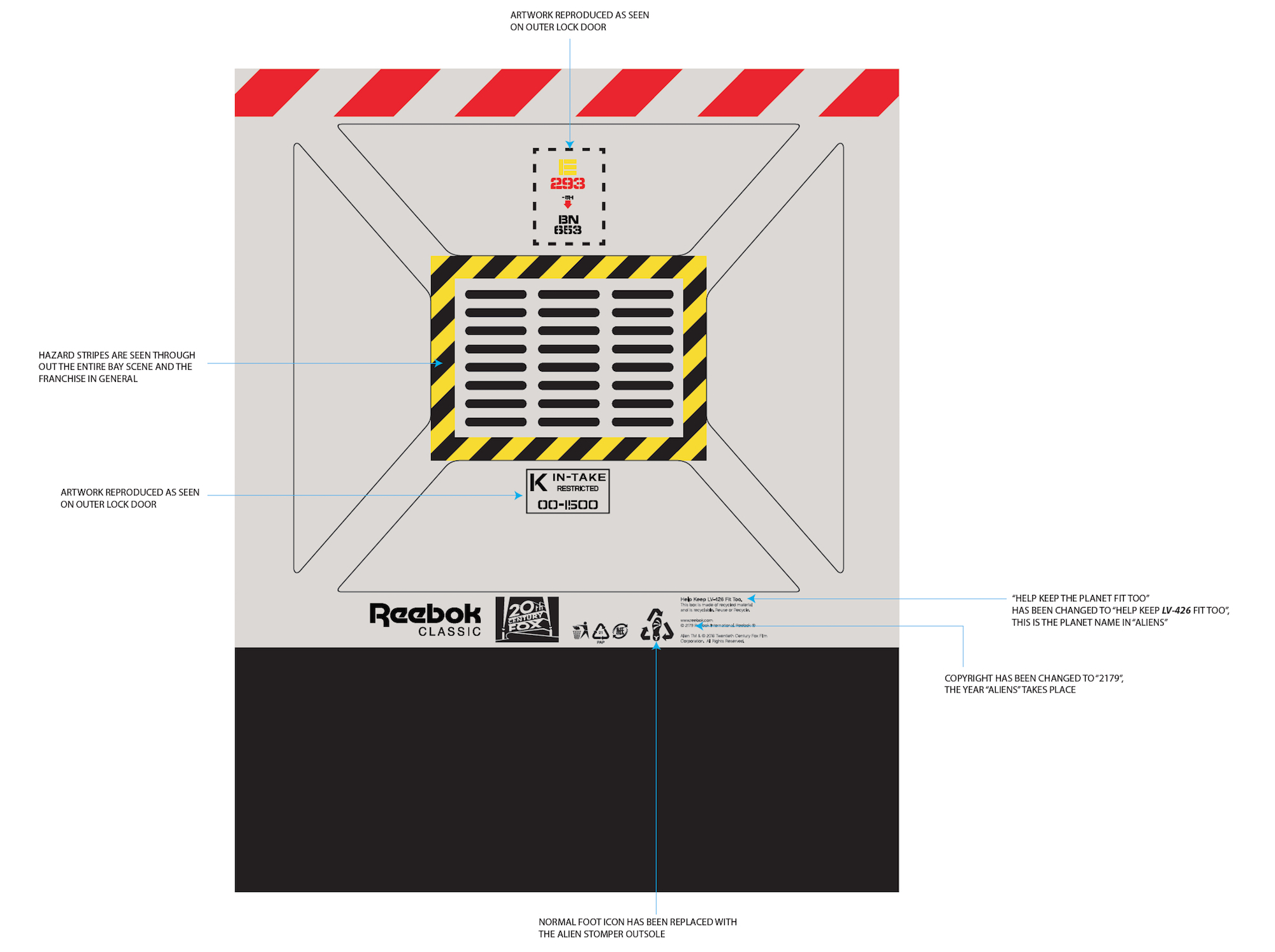 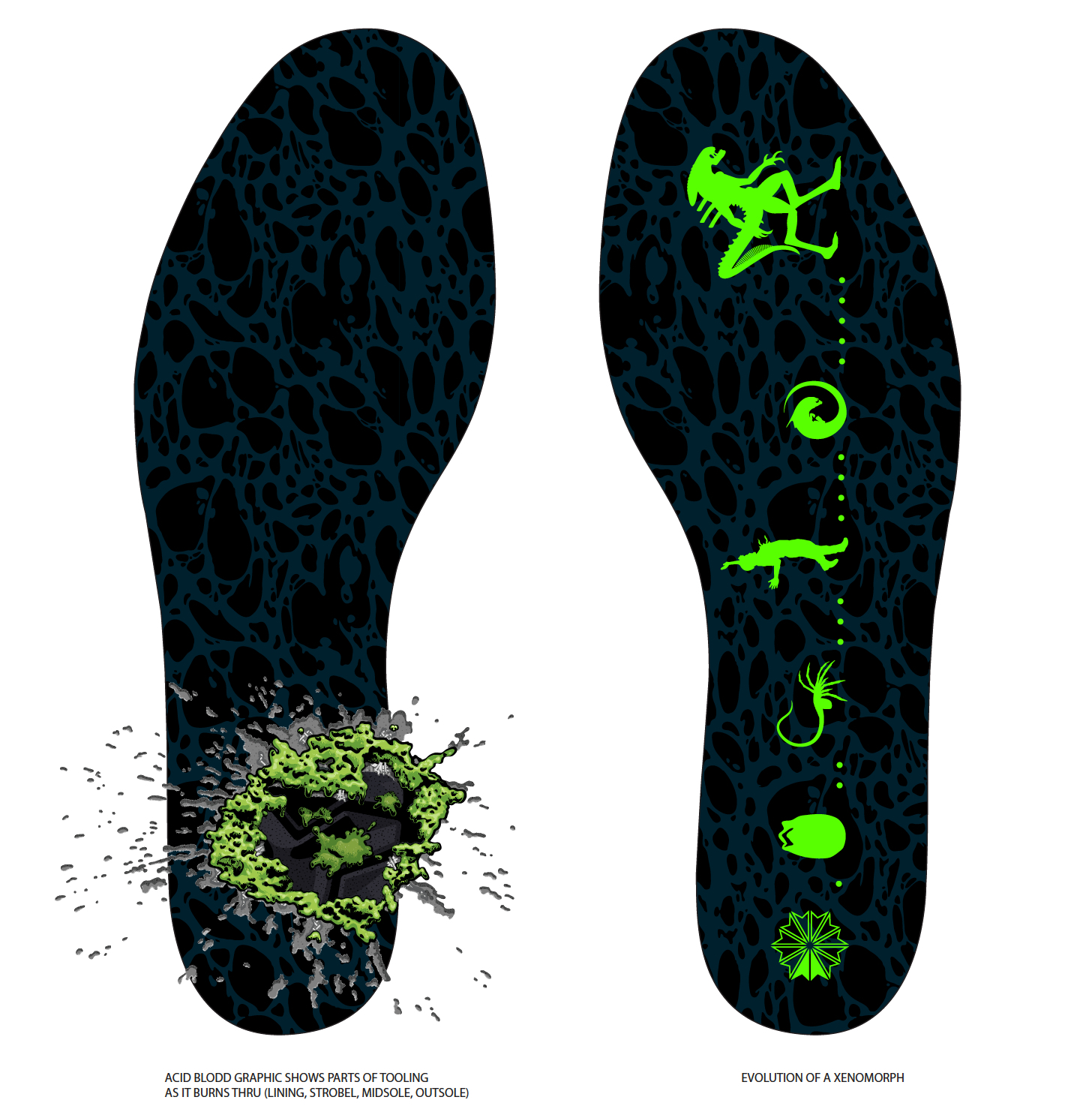