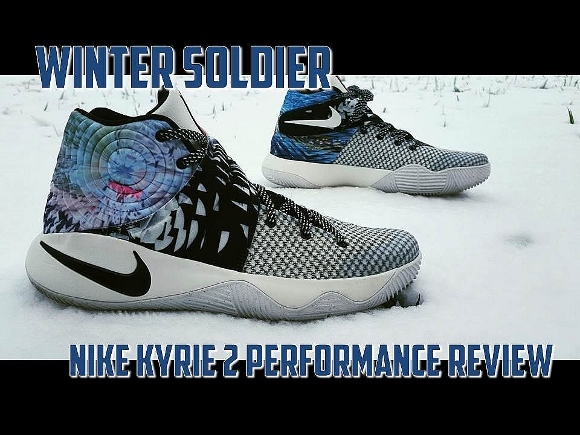 With Kobe retiring, someone has to take over the winter signature release for Nike. Why not Kyrie? After the success of the 1 last year, the 2 was one of the most anticipated shoes for this season.

Just watching NBA games this season, it seems like half of Nike’s roster was wearing the Kyrie, so something must have been done right (I reviewed them here, and it was an alright shoe, nothing special). For an entry shoe, it was an impressive debut. Compared to shoes like the Curry, Rose 5, Lebron XII, and even the HyperRev 2015, it was a step behind (in my opinion).

Now, the 2. New and improved. Better materials. Better traction. Better fit. No, really, all of those are better. But don’t take my word for it — just watch this video about the shoe and read along below. 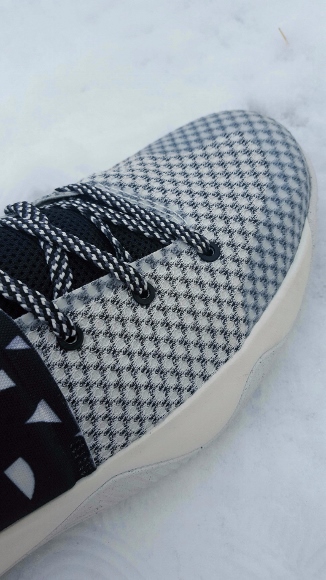 MATERIALS – Last year we got first generation Hyperfuse, and it was stiff and hard from the box. Again, entry level. This year we get an upgrade of the same Fuse material — not as stiff or hard. Actually, I thought the line between support and flex was walked proper — stiff enough to hold but still thin enough to not overwork the forefoot when running.

The heel is a fantastic Lycra/mesh wrap that fits perfect around the ankle; I wish the WHOLE shoe was out of this material. It had a little Speedform feel to it but more padded. Thick ankle strap to pull the foot into the shoe. The sole is a one-piece rubber and thick but soft. One touch I like is the added leather/synthetic on the tongue, heel Swoosh, and ankle strap Swoosh. Little lux things. 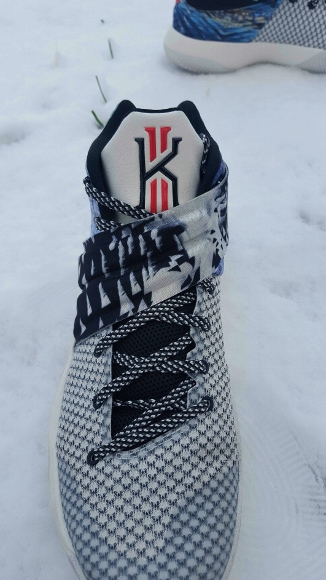 FIT – Simply put, one of the best fitting shoes I have ever worn. It’s funny, the last few shoes I have reviewed have had one category that the shoe really excels in. Either I’m getting soft or the companies are focusing efforts to fix problems. Either way, the narrow forefoot and harsh break in time from the 1 are a memory.

The 2 is cut slightly wider but still snug without over-tightening. In the forefoot the laces are off-set but not quite asymmetrical. That looks really cool but I’m not sure of the benefits. Midfoot and heel are tied in together thanks to the strap.

The STRAP. Not the KD4, but the Kyrie 2. I hated playing in the KD4 because of the strap. The Kyrie is WAAAAY better. Simply pull and close. The placement pulls the heel and ankle straight into the heel counter and with the higher lace holes and ankle cut, you are locked like Oz. The fabric heel allows for all the right moves without too much dance. I know I sound like an echo, but honestly, NO SUDDEN MOVEMENTS. The fit is the best I have tried in 2015. It would have won the category if I had them sooner. 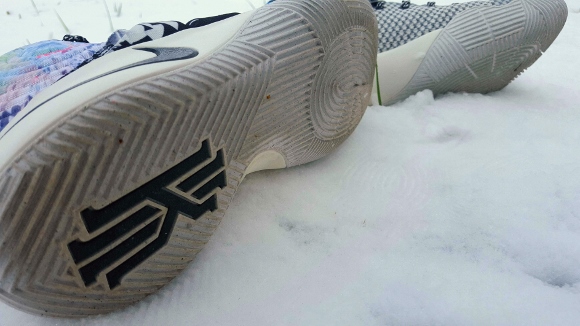 TRACTION – OOOOOOOOOOOOOO-WHEEEEEEEEE!!!!! Gimmick or not, traction works. And since they are so closely tied together in this shoe, we will get into transition also. The outsole of the Kyrie 2 is made on a motorcycle tire design — specifically, the drifting tires — the treads go up the sidewalls for tight cornering and quick changes in direction. Kyrie is quick and makes changes in his direction, well, quickly. See the pattern? Last year’s herringbone was too tight and a little dust had you sliding. The circular Aztec crop circles this year grip in every way like Kung Fu Joe. The grooves are wide, rubber is soft, and the outsole touches the floor in every direction unless you go Turtle ston your shell.

I did find the curved sole a little, well, unstable at first for shooting, but getting into movements the roll and traction pushed my foot into moves. I push hard off my medial forefoot, especially going left off of my right foot. A squared shoe would slide. A rounded shoe pushes and catches (don’t think this is new — another company tried this in the mid-90’s, Feet You Wear, and it worked then too). The thing is, they aren’t over-sticky, which sounds really funny, but sometimes a shoe sticks and won’t let go. The shape and sculpting are made for transition and movement and after three games I was in sprint mode. Smooth and low-riding, the Kyrie 2 is made for open court play. 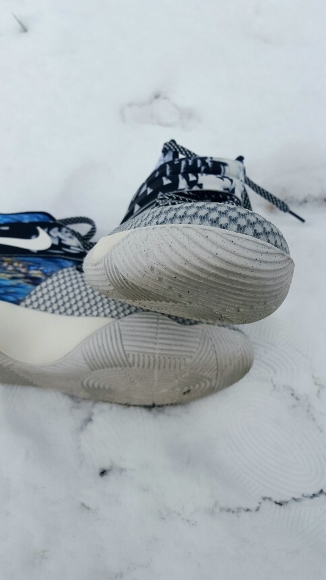 CUSHIONING – And then there was none. As good as fit and traction were, cushioning was the complete opposite of that. And again, not a new concept: the cushioning in the old FYW shoes sucked too. The idea is low, responsive, and quick; mushy, sinking foam is the last thing you want or need.

But we are 20 years removed from that era — surely by now a way of incorporating some sort of padding for landings, especially with the dynamic guards in the league and colleges. Guards are rebounders, dunkers, shot-blockers, not ground-bound Steve Nash’s anymore. A Lunar insert, dual fusion, anything (rectangle Zoom would kill the rounded forefoot)! There is a Poron insert, but Poron is basically a foam overlay that will bottom out. Heel is Phylon and a rectangle Zoom, but I dare you to tell me you feel the Zoom. You’re a LIAR!!! The Phylon never broke in during testing so no heel give. Think Rose 1 from adidas — if you liked that court feel and cushioning, you will be right at home in the Kyrie 2. 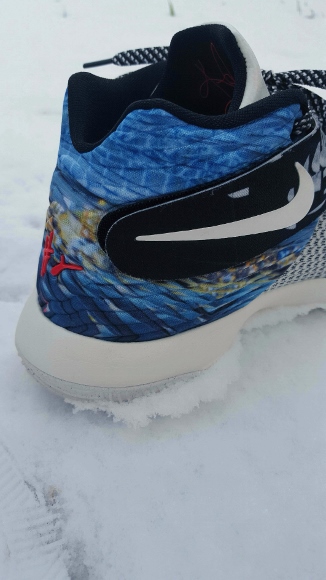 SUPPORT/STABILITY – I changed out of the Kyrie 2 ten minutes into my first wear. The forefoot bubble was too much. I was coming off picks and stopping for pull-ups and feeling like my feet were wobbly, my ankles were moving. The next day, I went and shot for an hour and a half — drills, stations, jumpers, chair picks — and I worked my way into them. After that session I played five games of full and never had a problem again. The shoe is different. Very different. But different is not bad. If you can get past the initial feel, you will get a quick, biting shoe. The sole is wider than the upper, especially on the lateral side, so ankle rolls should not be a problem. Not a large outrigger that feels clunky, but a molded and formed edge for transition. The strap is the tool and with the added lock in provided you have no issues with heel slip or instability from fit.

OVERALL – Foot rocket. Fast. Quick. Traction. Cornering. All of these things make the Kyrie 2 what it is. If you are a quick, fast, light guard who blows by everyone and crosses over without slowing down, you NEED to get a pair of Kyrie 2’s. If you are like me — knees are going from court years — and need cushioning, keep moving. Once a week, maybe two weeks, and you could play in these. Every day, it is just too harsh. I love the looks and the direction, but I can’t wear them too often. That said, I will be all in on the 3 next winter. If the improvements from the 1 to the 2 look like this, the 3 is destiny. Just hope they stay away from those Kobe prices. 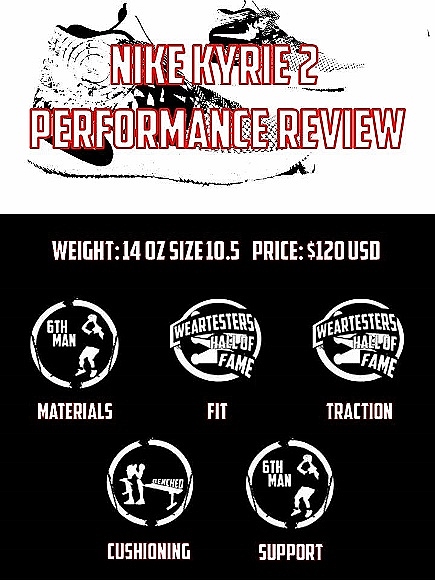