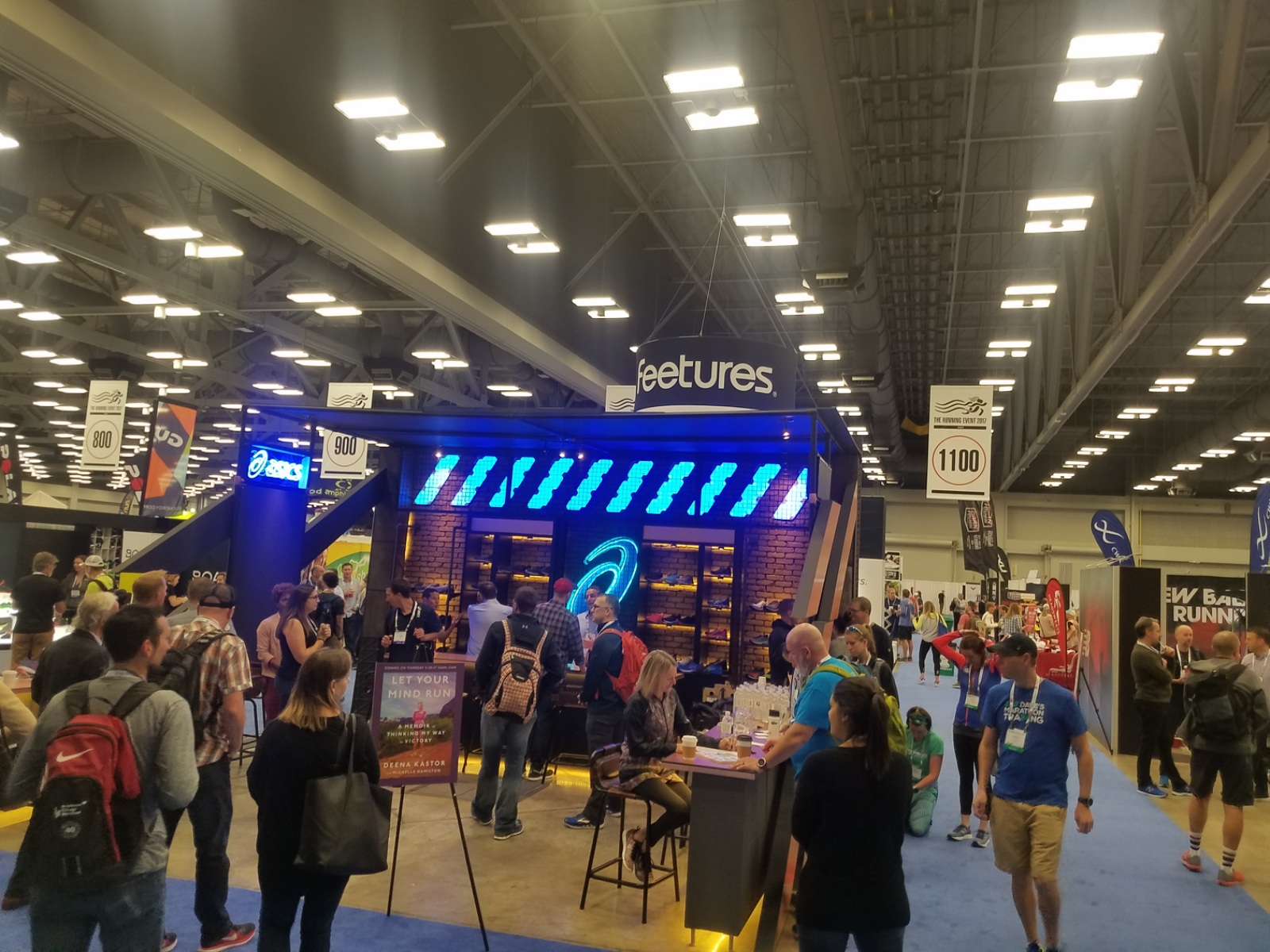 Every year, the running community comes together for an event appropriately called The Running Event.

Two years ago, WearTesters made its first visit to Austin for the event. In 2016 the event moved to Orlando, but this year it was back in the Lone Star State. Knowing the “big boys” would be there, as well as every running shoe company and running product innovator, it was time for me to head south for a three hour drive. 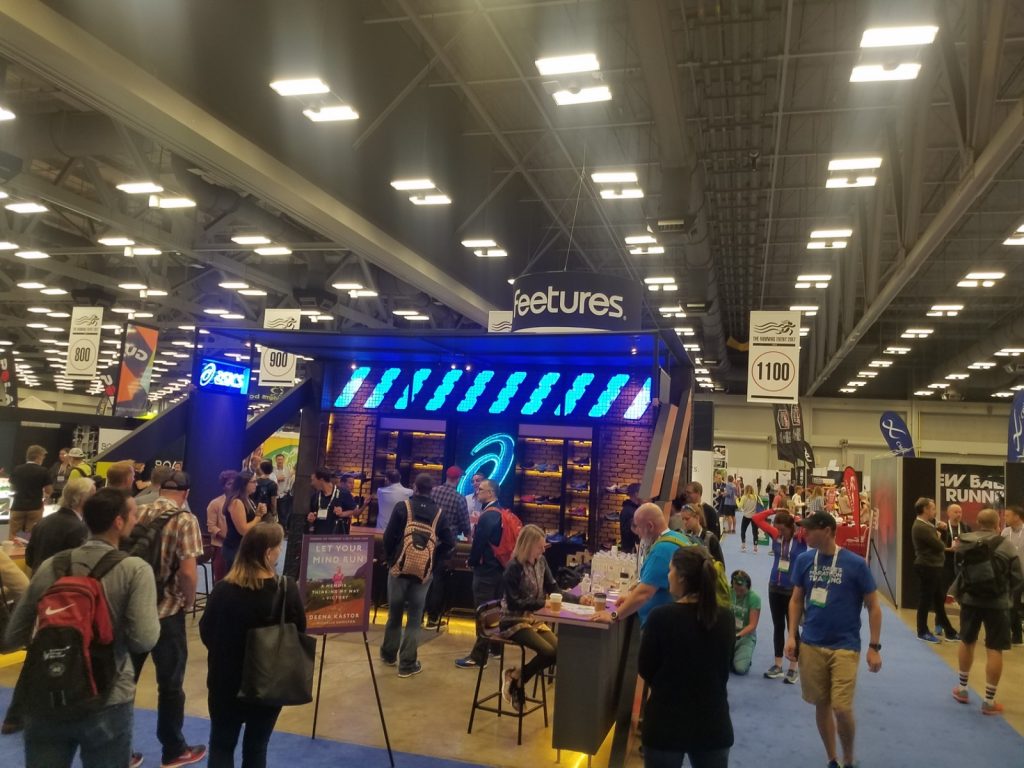 The Running Event kicks off on Tuesday with runs through local areas and parks and dinners galore at night. Wednesday, the trade show kicks off and runs through Friday, with runs, panels of retailers and industry experts, and lots and lots of people — some fit, others not — all checking out the products that will give us our best times in 2018.

First up was a serious appointment, one for the ages, and someone I have the utmost respect and admiration for in the shoe industry: Dave Dombrow, Chief Design Officer for Under Armour Footwear.

I first met Dave two years ago at my first Running Event, and we talked about any and everything, some off the record, some not (you can read it here if you want to catch up). Dave is extremely honest and, like me, an uber basketball nerd. He has been involved in every aspect of the Curry line, as well as the new running and cross training shoes. This year, we have to talk about HOVR. 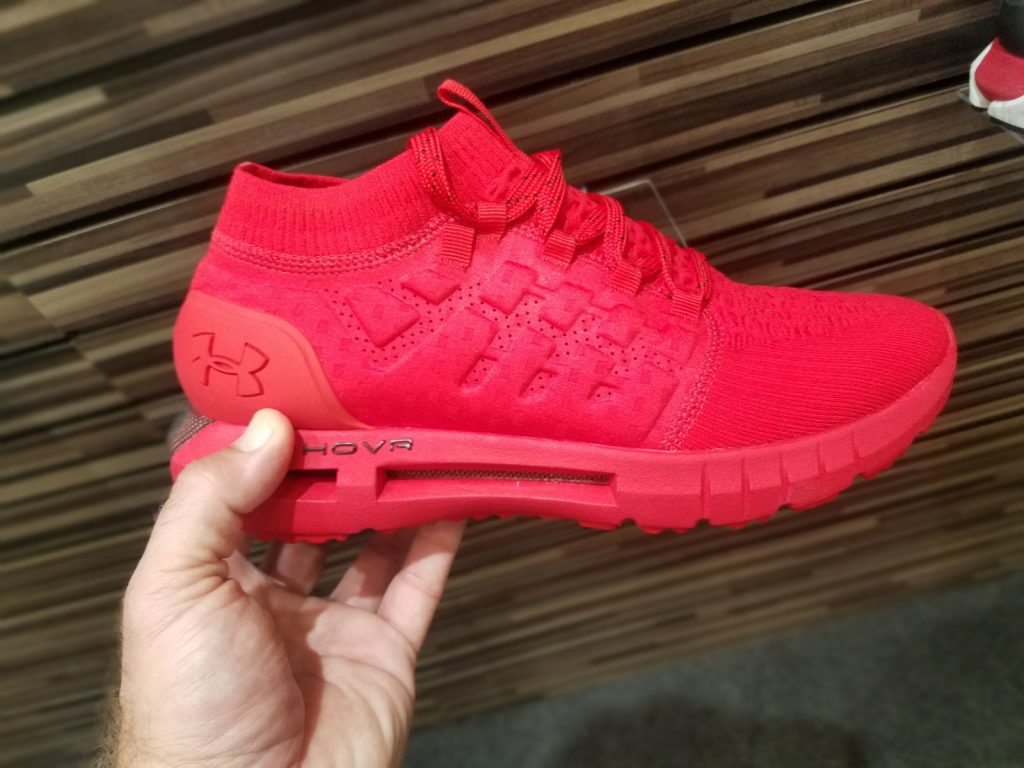 HOVR has been covered in depth by WearTesters already, but this was the first time anyone from WT had a chance to get a pair on-foot. And I can say yeah, UA has something here.

The HOVR Phantom (the collared mid-top) is on my foot and going through review right now; the HOVR Sonic (the lowtop) is on the way. The HOVR Phantom is the Lexus of the line — plush, smooth, and comfy, while the Sonic is the Corvette — low, fast, and quick. No interview with Dave this year, as we have already covered most of what’s coming up, but it was nice to catch up. 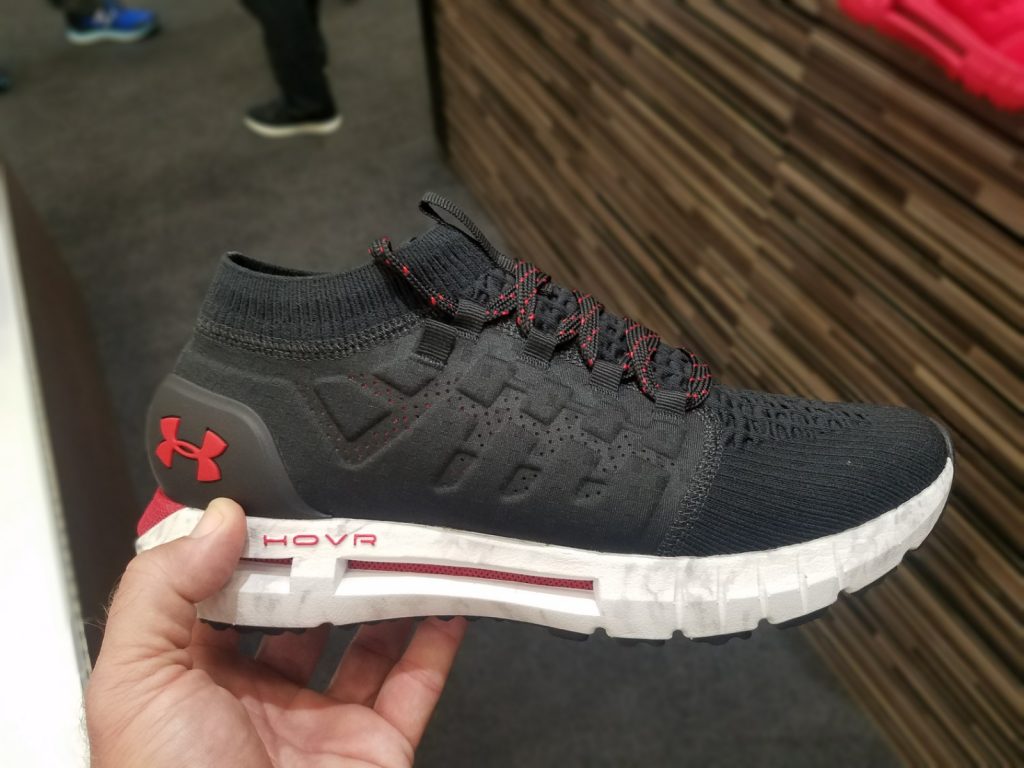 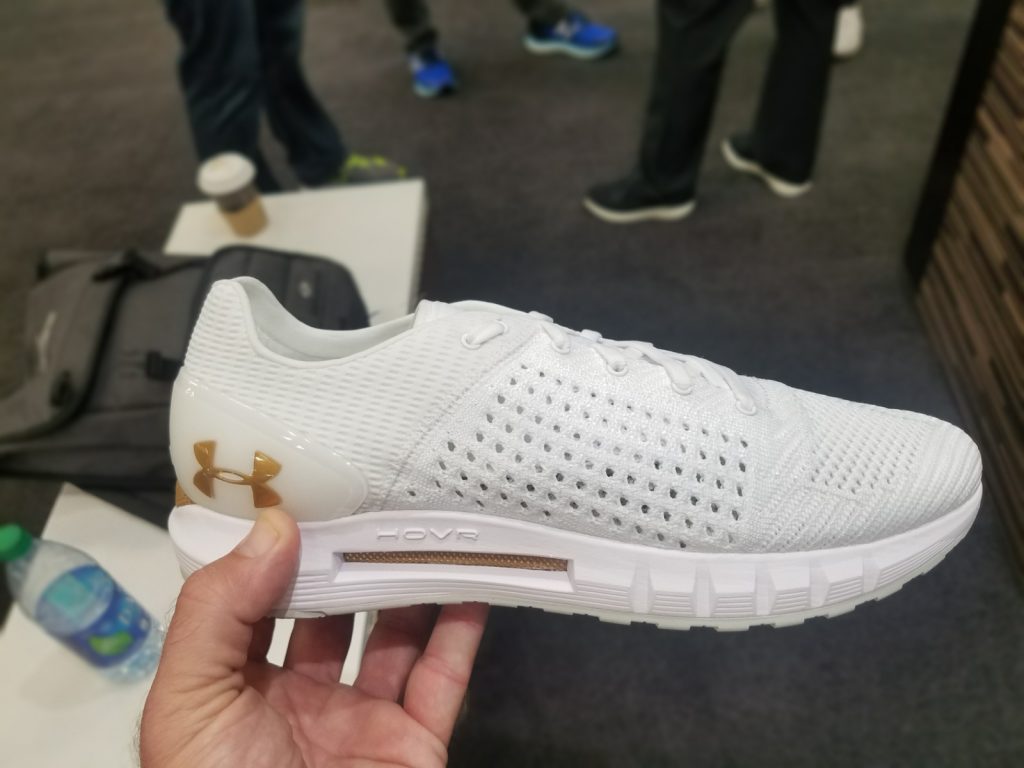 I hit the New Balance booth next to see what was upcoming with Fresh Foam, and although I didn’t find much, I found these interesting models. I would love to tell you the names, but the New Balance reps there weren’t giving out much information. From what I could tell, FuelCell is the new foam, and it seems to be an open cell foam that is extremely light and felt super-responsive in hand (no on foot — they only had size 9 samples). 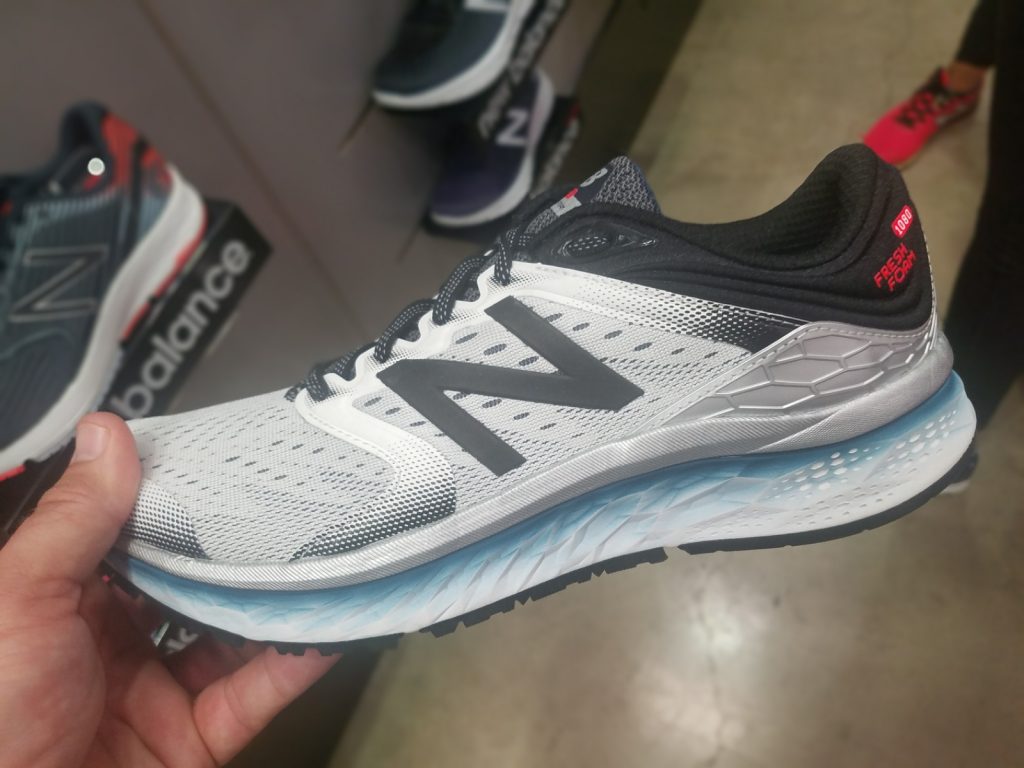 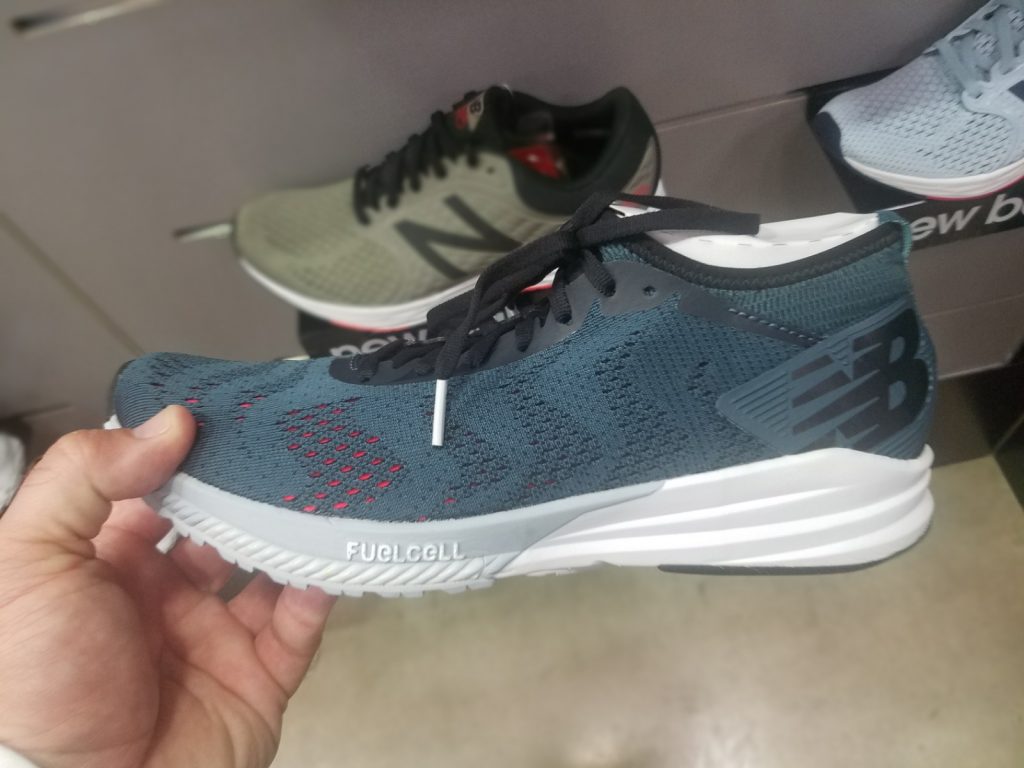 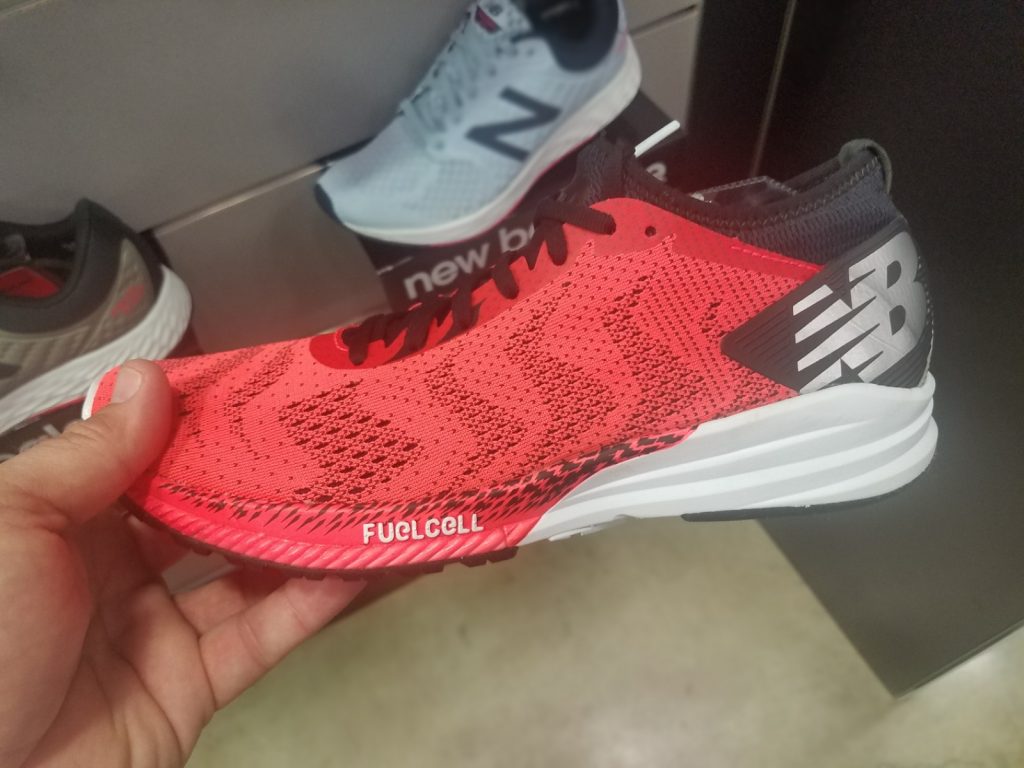 Oofos is a company that first appeared on our radar two years ago. It makes recovery slides and sandals with pronounced arches, a rocker effect underfoot, and a slow-recovery foam footbed.

Seriously, after a three hour basketball session or a long run, nothing feels better than a hot shower. The second best feeling is slipping the Oofos on. Since day one, the company has touted the benefits of wearing the shoes after activity (even during, in some cases), and it is now being recommended by health professionals like podiatrists and physiotherapists.

This year Oofos was featuring the Oomg, a closed-toe stretch-mesh upper with the same recovery foam midsole. 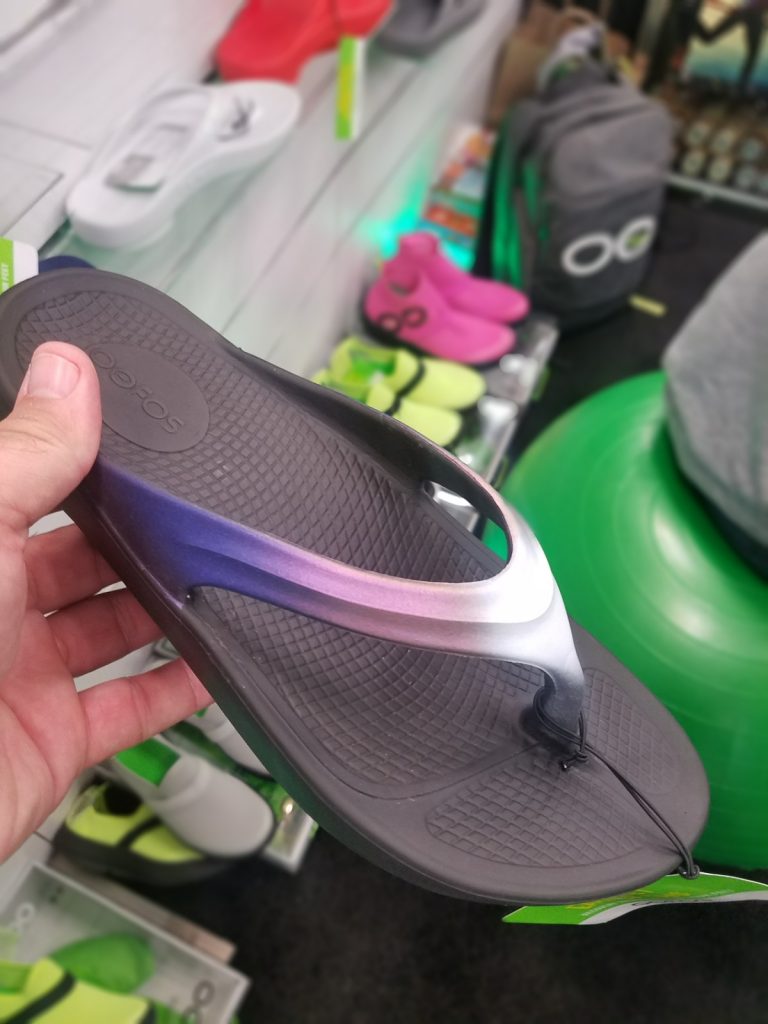 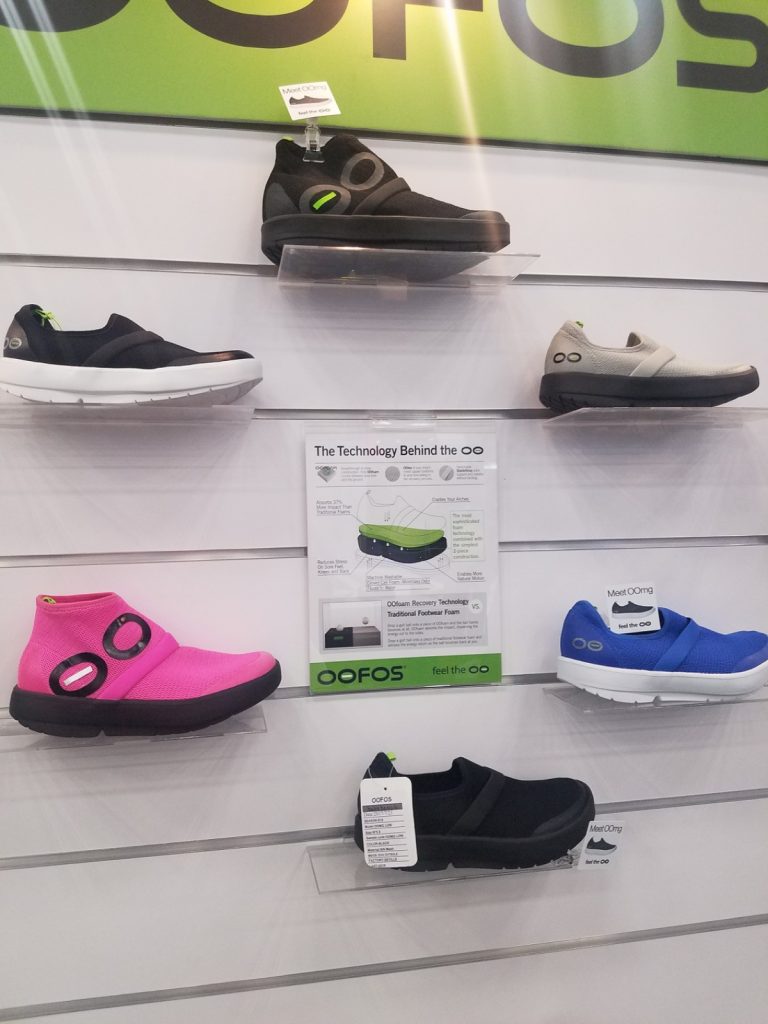 A company I don’t recall seeing two years ago is Reebok. Well, this year that wasn’t the case, as they were right in the front door — for good reason. The Reebok Floatride Run was my choice to wear to the Event, and for good reason: it is easily one of the best running shoes on the market today.

Luckily, Reebok isn’t giving up on the Floatride platform because new designs and new materials will make their way onto it in 2018. There will be an upper made of the Lenoweave seen on the JJ II Trainer as well as more colorways.

I was told the Floatride Run will have a life of 18 months, giving Reebok time to make even more modifications. I still prefer the knit version, but the Lenoweave did feel more stable.

Also in the building was the “astronaut” shoe – the Floatride Racer. This may be the craziest shoe I have held in my hand – it weighs nothing. 3.75 ounces in a size 9 men’s, but the same cushioning found in the Run. I have no idea if it will see market, but if it does, it could be a game changer.

Also on hand was a cageless Run, called the Floatride Run Fast Pro, that takes the same midsole and attaches it to a mesh upper with no TPU support cage. Before you say anything, Reebok and adidas have a “relationship” so all similarities are forgivable. 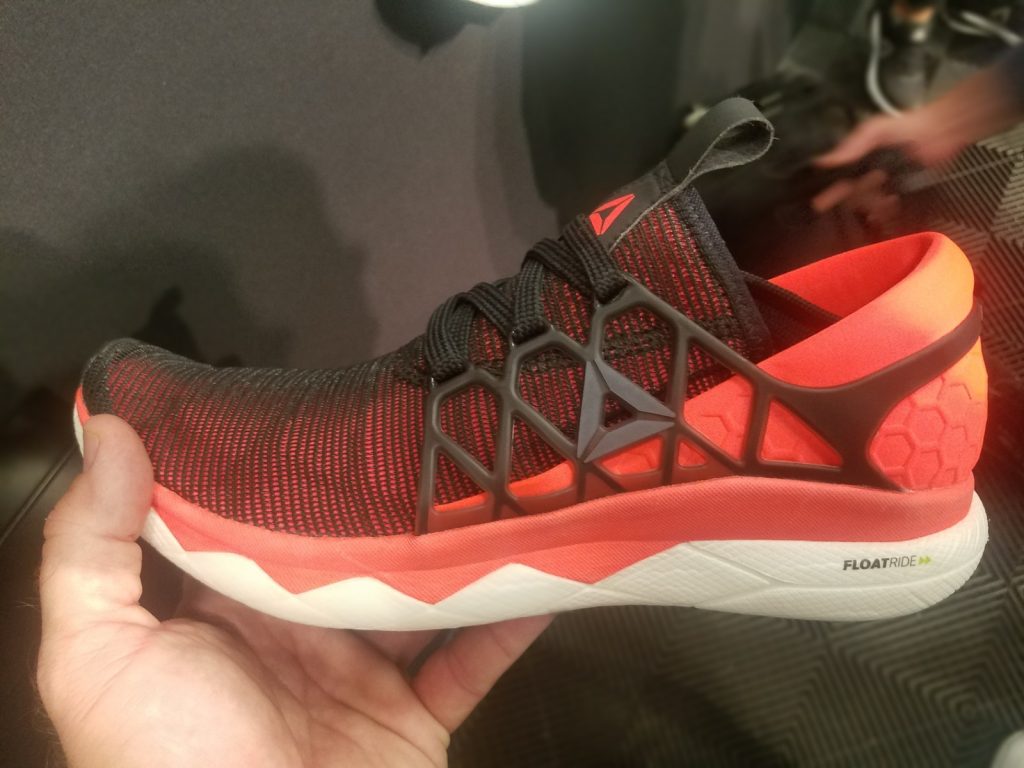 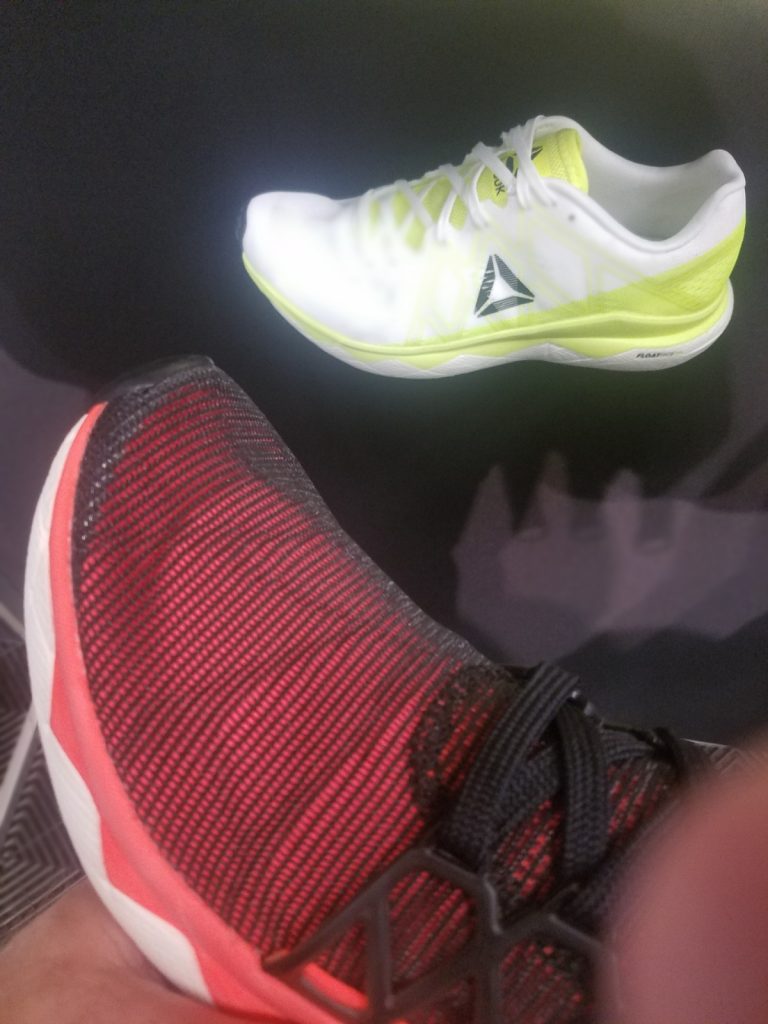 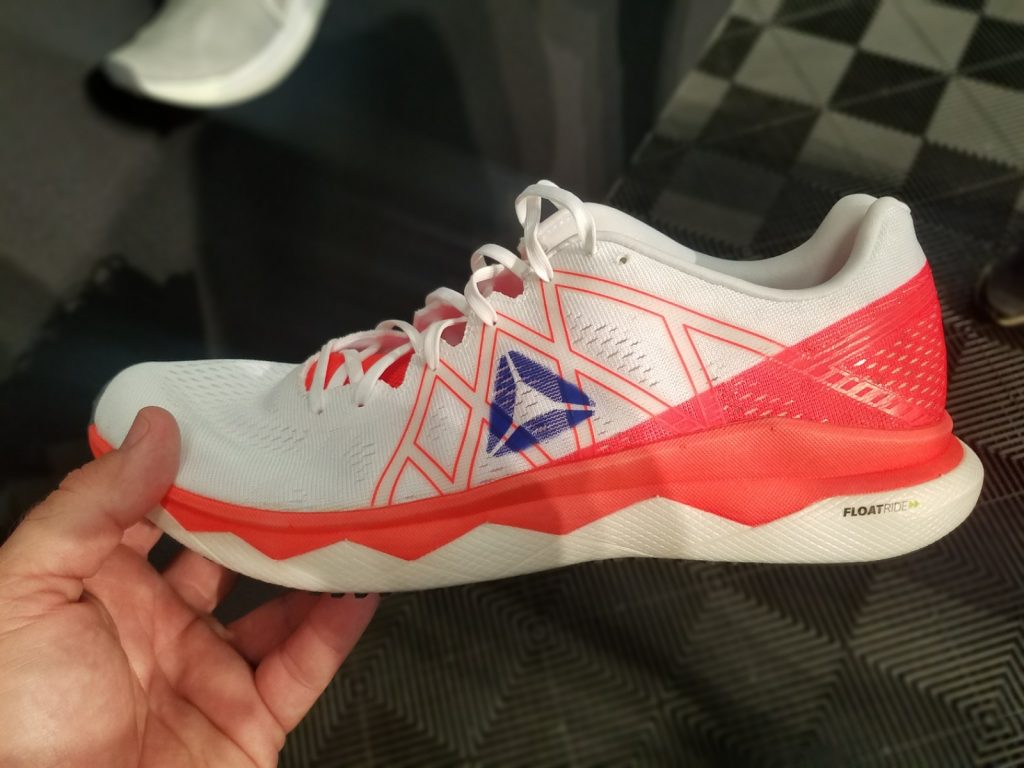 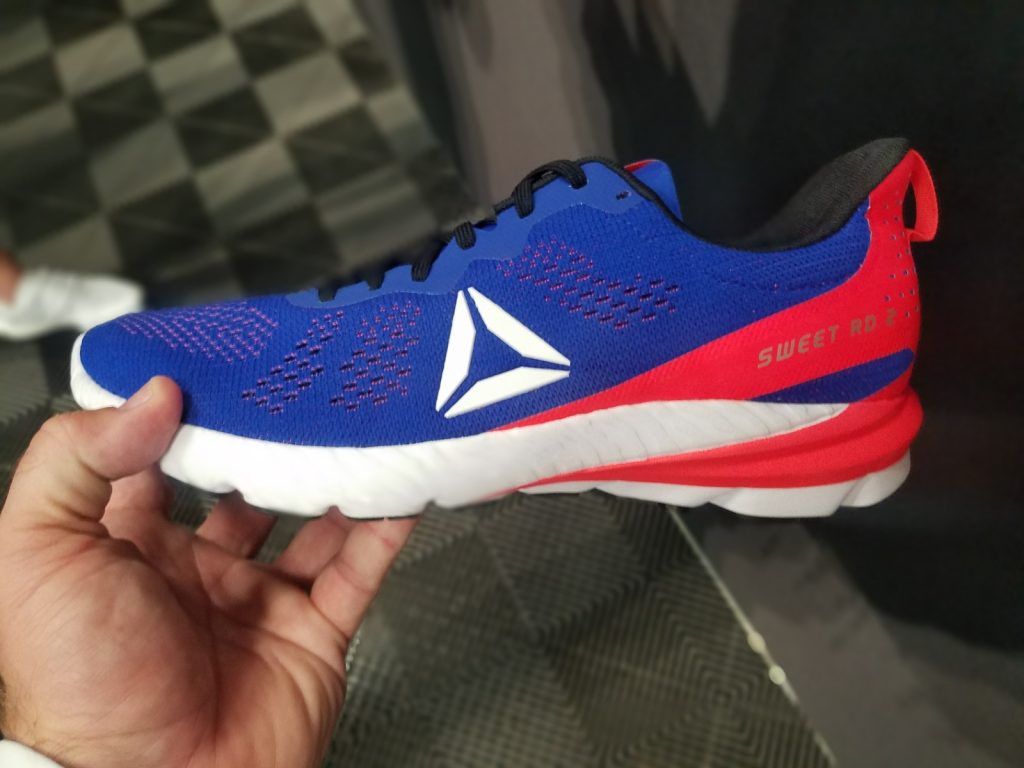 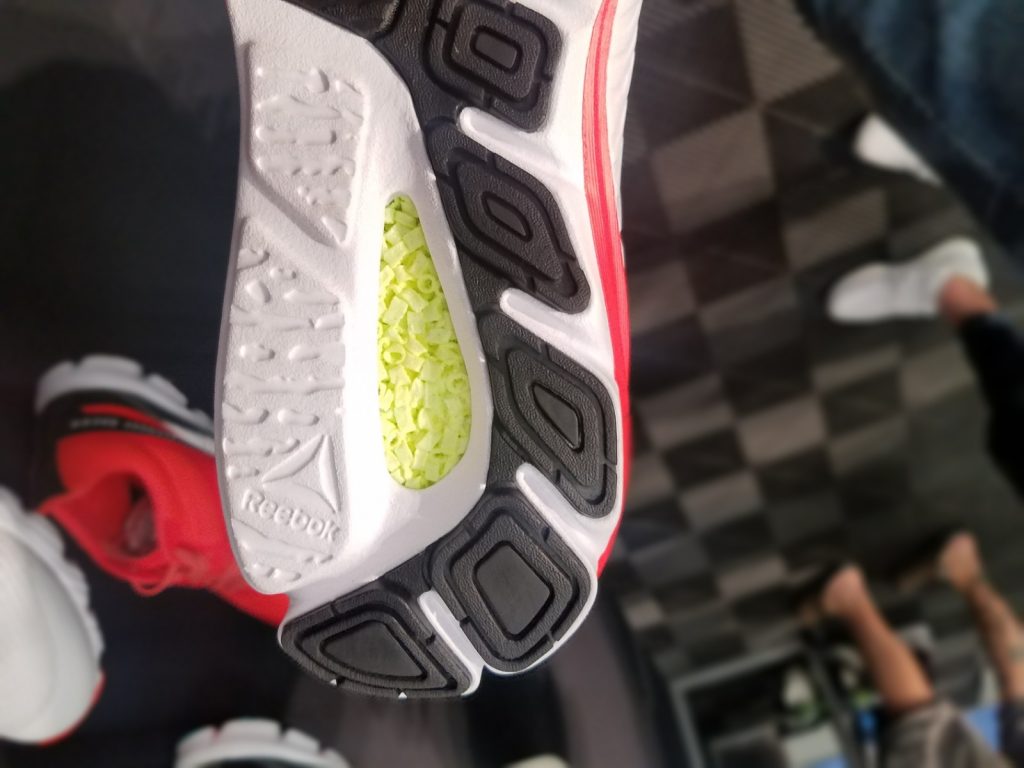 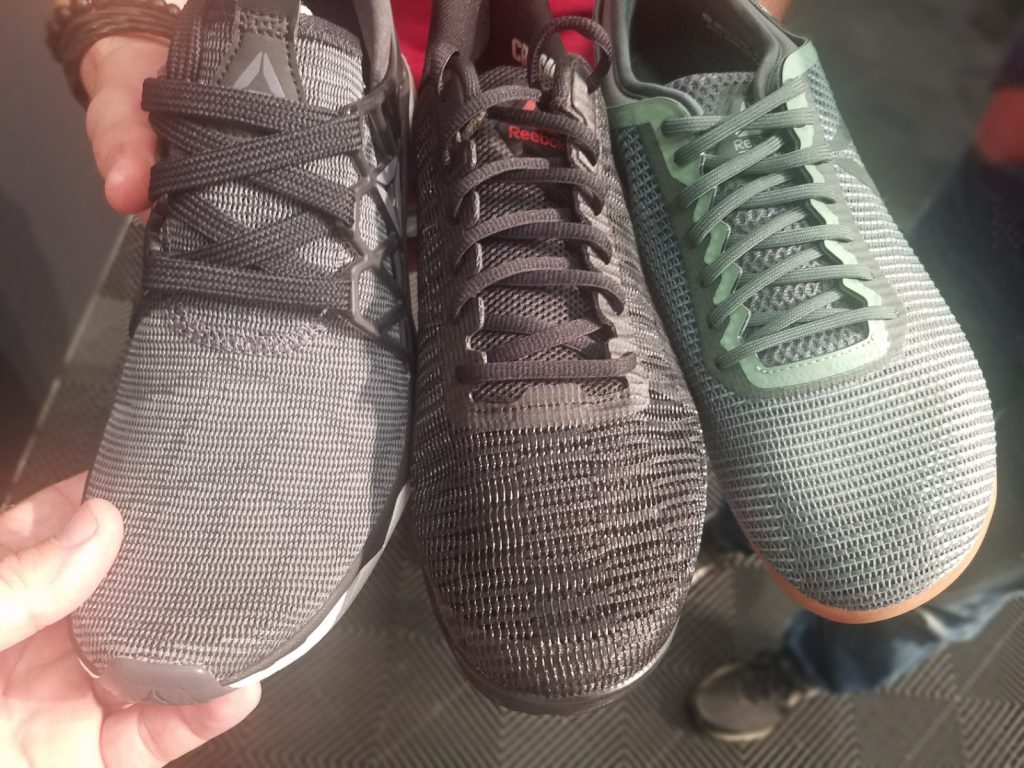 This year, adidas Running was not at TRE. adidas Terrex Outdoors was, and from the images below you can see Boost is going to be a huge player in the trail/hiking line in 2018.

From the 330 (first image) to the 320 (below), the black knitted upper (no name on that one), the Response Trail, and the last image, what was called a “trail Ultra Boost,” the Boost pebbles will be taking on real rocks and pebbles in many forms. Huge lug bottoms (Continental Rubber), fuse in high wear areas, and Gore-Tex membranes make these competitors to Under Armour’s offerings. 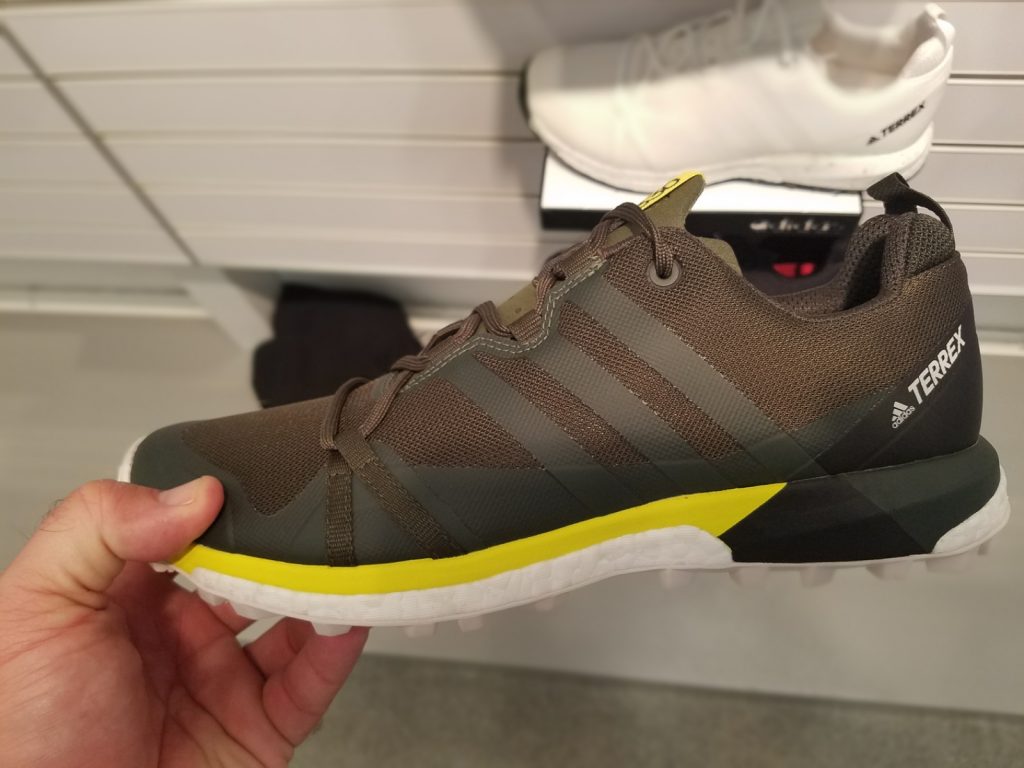 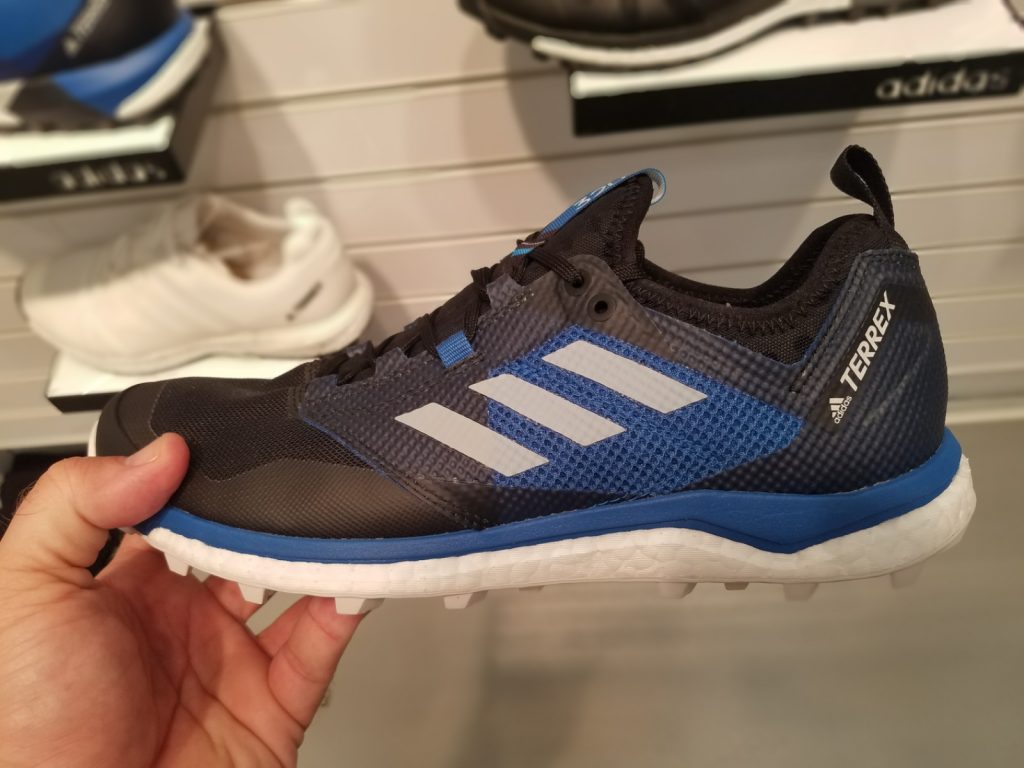 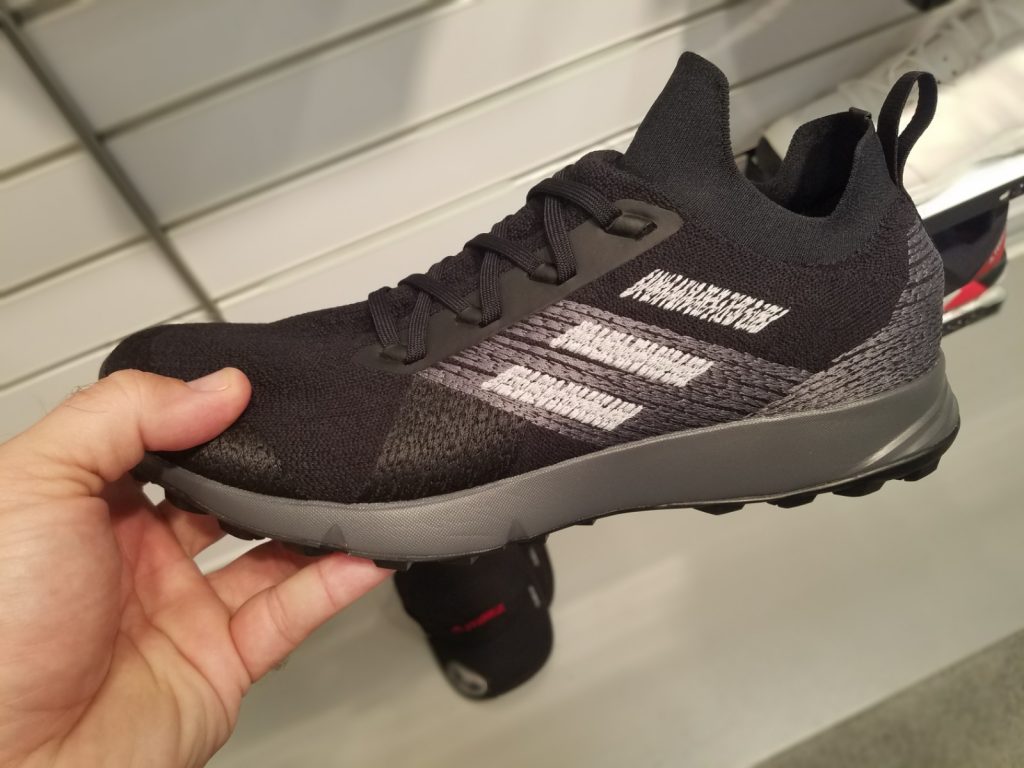 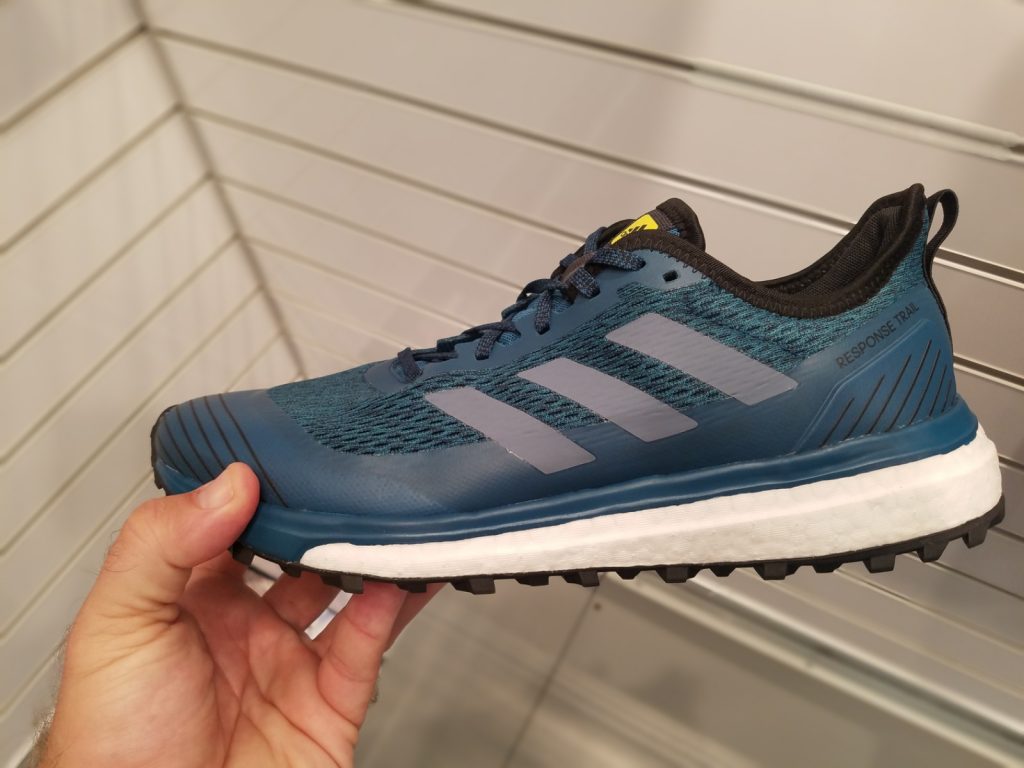 I had to hit some of my favorites, 361° and Topo. Each of these will have a separate write-up in the very near (next week) future, because both brands are doing some exciting things in running.

One of the best things I saw while at TRE was the focus of smaller brands on their product — they don’t worry about covering every product. They pick their lane, perfect it, and produce. Sock companies make socks. Body Glide companies make non-chafing sticks. The Pickle Juice people made all kinds of recovery and refreshment snacks.

Most of all, the interaction within the brands excited me — the designers know each other and are friends. I was asked by company reps what I thought of other brands and products, and when I would give opinions leading with “well, not to bring up the competition,” I was told “No worries, we all know each other anyway.”

One of the greatest innovations in footwear I have ever seen (story coming soon), was surrounded by other companies’ designers “oohing and aahing” like kids at Christmas. It is this kind of wonder and community that the “shoe game” needs to get back to, and I found it in a crowded and flashy monument to running. 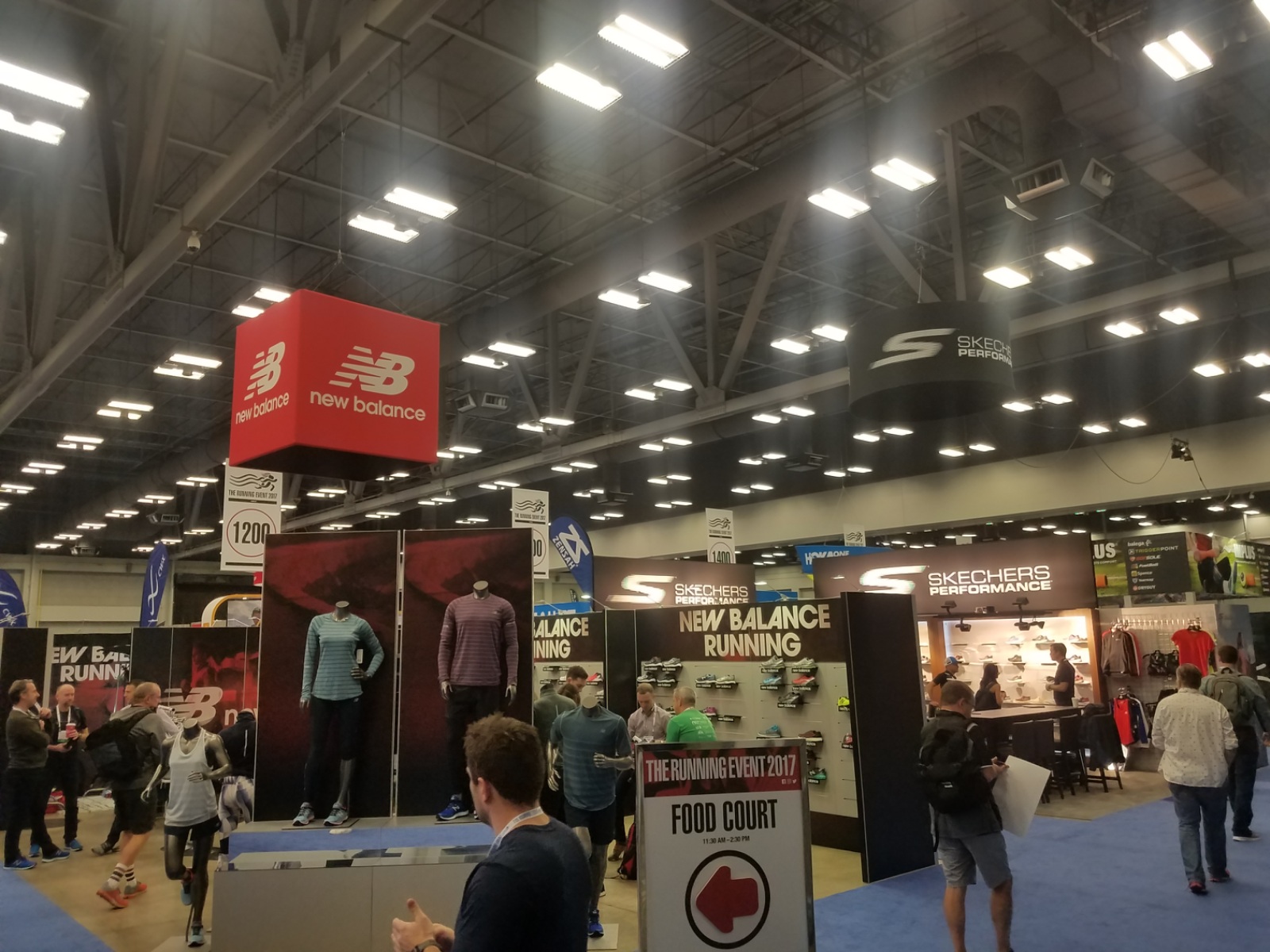