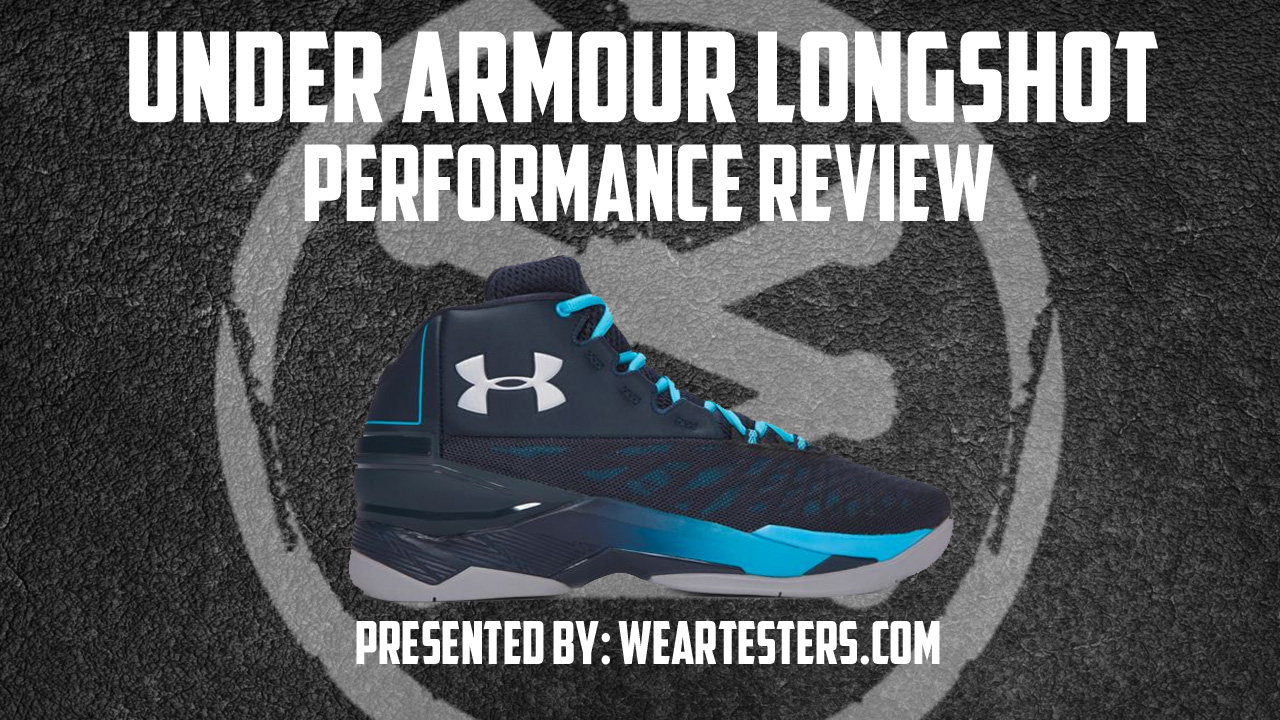 With the success of the Curry 2, it only made sense to take what worked and mold subsequent models after the design. Every company does it, to some degree. Looking at the Under Armour Longshot, the obvious inspiration was the Curry 2 traction, so that’s a good start. However, this was…unexpected… 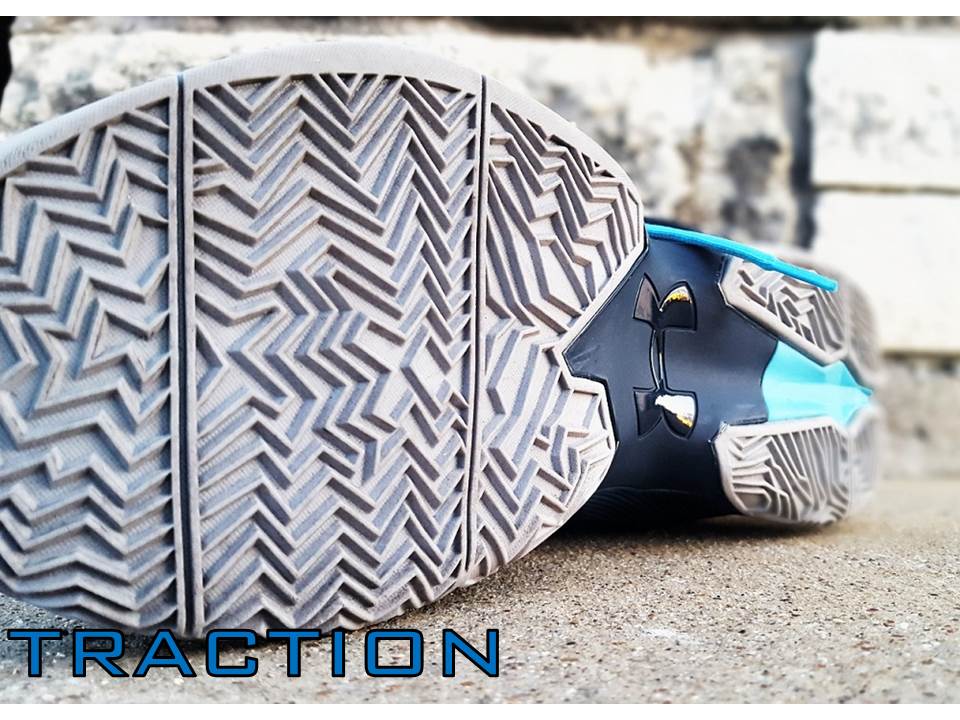 Maybe the best ever, which isn’t surprising, since the Curry 2 had some of the best ever, and the Under Armour Longshot features the same stuff — it’s actually exactly the same. Some would say “well, that’s lazy, cheating, we want something different!” and then complain because the shoe doesn’t bite. Bravo, Under Armour — if it works, keep it. Perhaps after five different shoes have the same UA could tweak it a bit, but for now, nice. It didn’t matter what level of dust and grime was present, the Under Armour Longshot hung on like Shaq on TNT — you just can’t make them move. Any direction, any step, any play, if you don’t want to move, you aren’t.

Outdoors should be good for a while, as the pattern is deep and the rubber, although not the hardest, is still stiff enough to last. Again, good job. 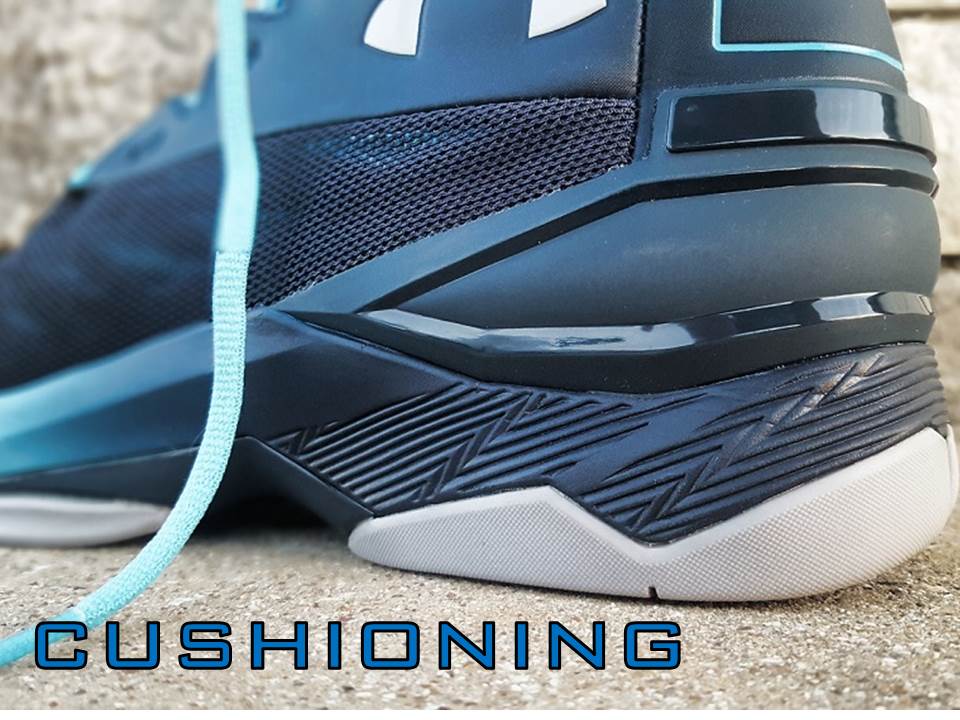 Well, let the questions begin. According to UA’s website, the Under Armour Longshot has: “Full-length Micro G midsole carriage delivers unmatched lightweight responsiveness” and “Charged Cushioning placed under the heel and forefoot to absorbs impact and convert it into a responsive burst of energy.” (Zappos has the same description on its site.) There may be Micro G in there, but it isn’t the Micro G I remember.

The Longshot is stiff and low riding with very little bounce and almost no impact protection as far as compression and return. It honestly feels like the Curry 2 in this regard as well. It is very solid underfoot, so no problem on instability while playing, and again, court feel is fantastic. I never really felt impact or landings, and my legs and back were never in any extreme fatigue or discomfort after playing, so yes, the cushioning worked — but I want Micro G! The bouncy, responsive, fluid foam that worked so well.

The issue with the Under Armour Longshot may be the carrier around the heel is just too hard to allow much compression into the Micro G, but then that just defeated the whole purpose of adding it. 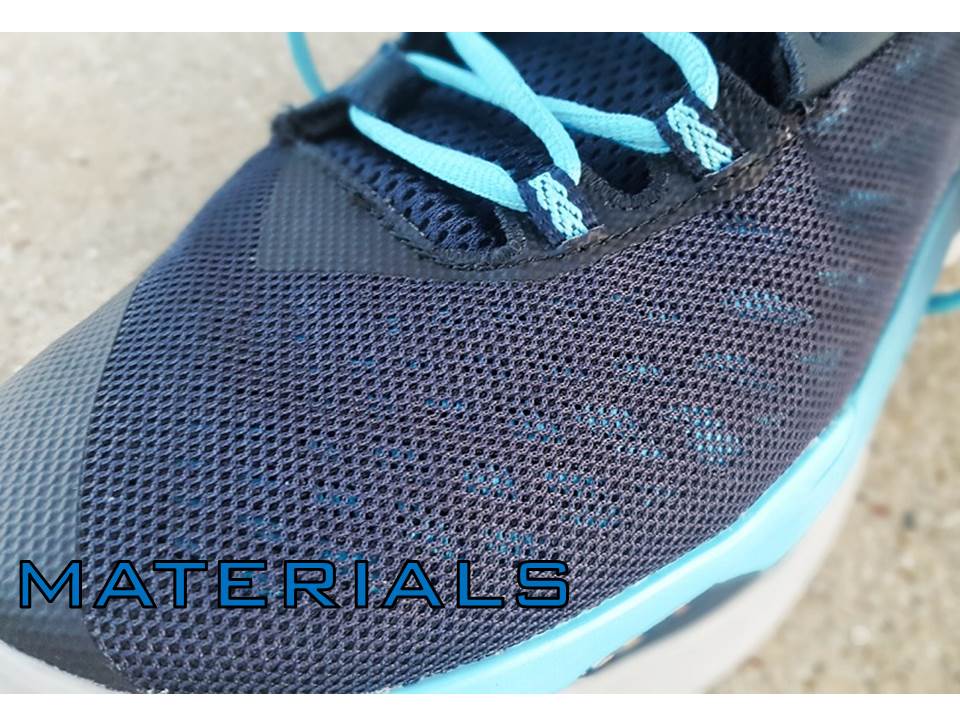 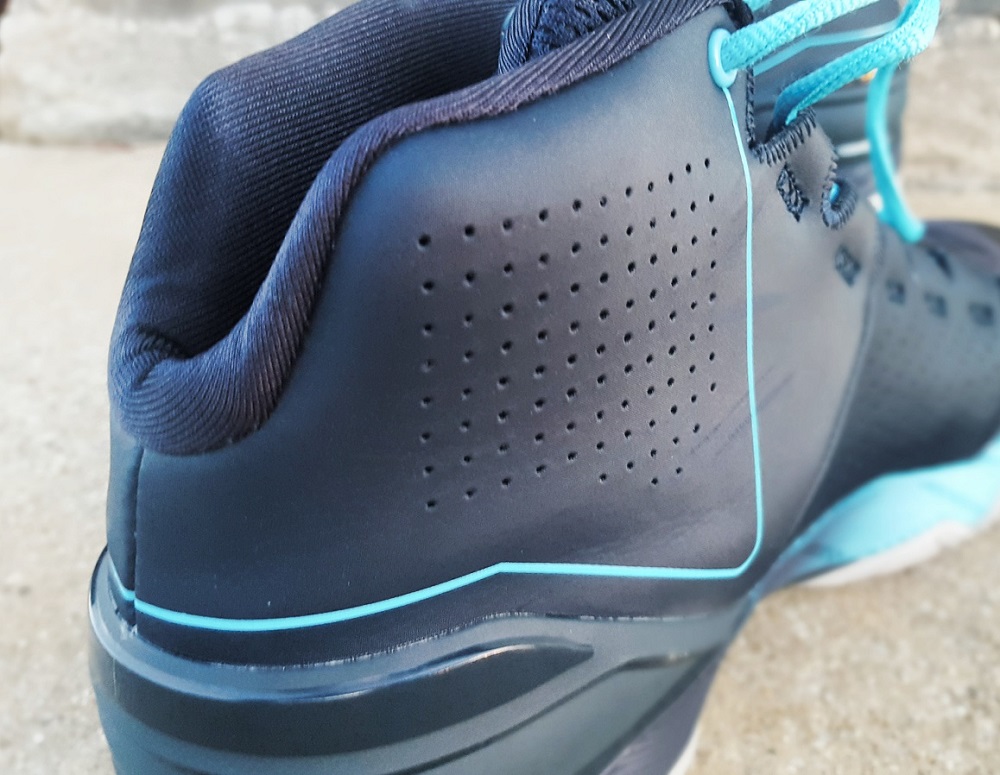 Let the let-down continue. To return to the UA website, we read that the Under Armour Longshot has an “ultra-durable fused mesh upper combined with soft leather ankle collar and quarter panels for enhanced structure and support”. This is what made me want to test the shoe in the first place, and it’s wrong because it isn’t even close. If by leather they mean vinyl that makes a scratching sound so bad Primo would be jealous, then they are dead on. The ankle area is stiff, hard, and took several wears to break in like leather would — because it isn’t leather! How hard is it to get technology right in the product descriptions?

The mid- and forefoot area is an open mesh with foam backing and it flexes nicely with the foot, with a little fuse on the toebox and lace areas for durability — all fairly standard for today’s designs. The same plastic shank under the midfoot as the Curry 2 keeps that arch arched, and it still extends into the forefoot for improved transition. 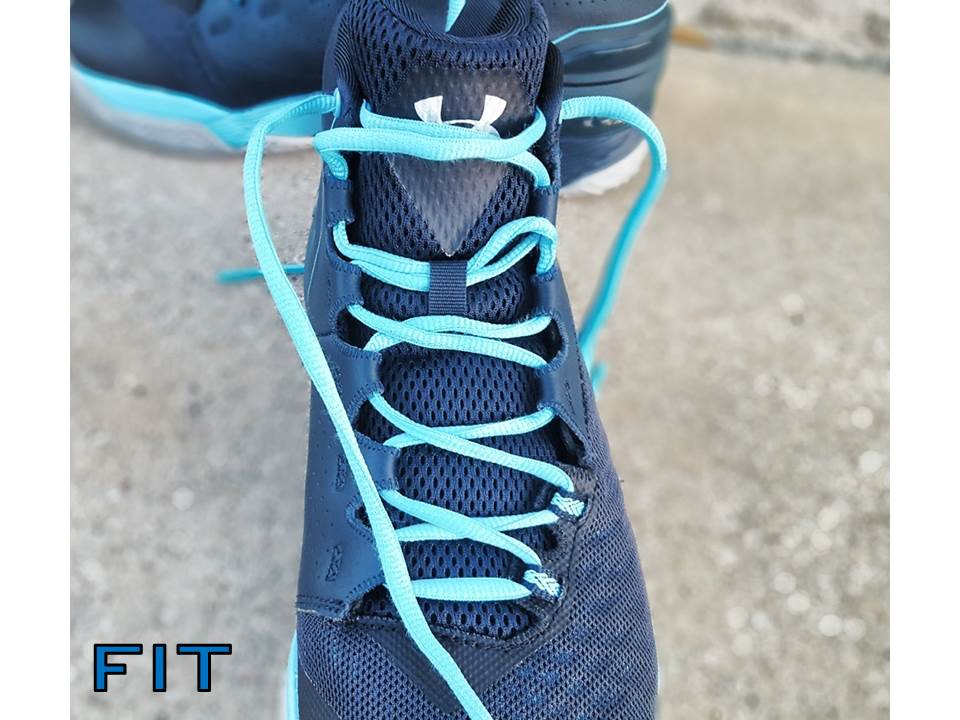 At least the fit was nice, running true to size. Getting my normal 10.5 worked great, and if you have a pair of the Curry 2, these are a little longer, about a 1/4 inch in length. The toebox has a little extra volume above the foot, but not enough to cause a bubble when laced tight — just enough to be comfy when the shoe flexes. The way the forefoot lacing crosses over the foot really tightens and secures the foot from any excess movement, especially laterally. This helps a ton since the traction is so good; it keeps the foot from sliding off the shoe and rolling over or slowing down steps in recovery on defense.

The tongue is nothing special, just a normal mesh and padded system with no internal bootie; again, very much the Curry 2. Ankle fit is secure and locked in, due to both the lacing and the ankle padding being molded just right. No heel slip at all; the lacing system pulls the foot into the heel and the heel counter is just solid enough for lockdown but won’t completely mummify your ankle. Overall, I was able to achieve full lockdown without having to completely cinch my foot in super-tight. 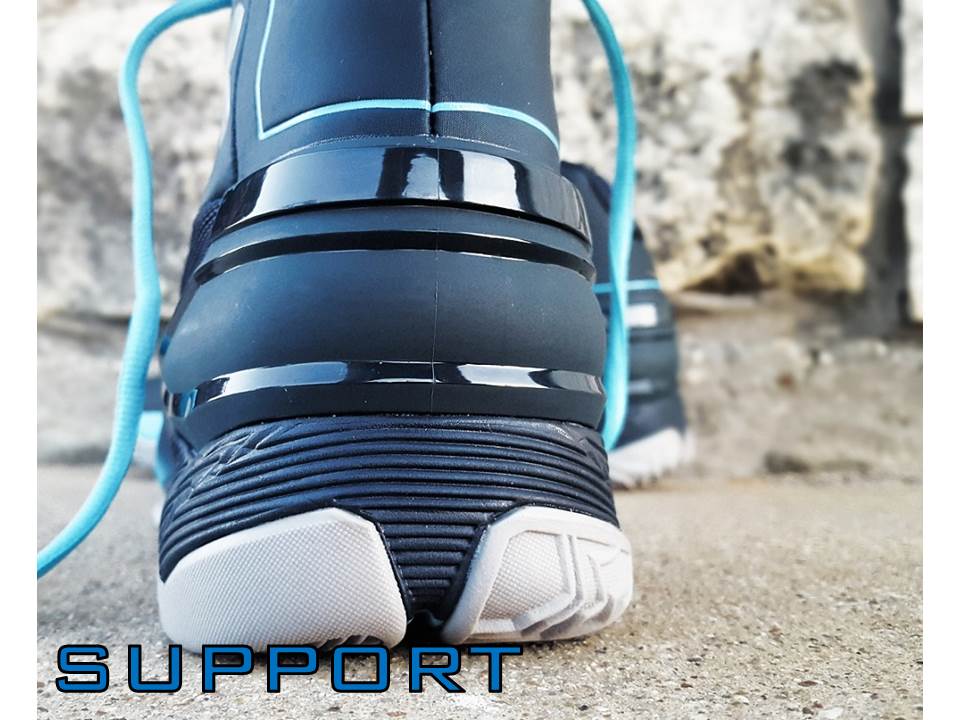 Probably my favorite part of the Under Armour Longshot. Wide, flat, stable base topped by a stable foam cushioning for stable landings. It’s stable. A long outrigger runs from the end of the pinky toe to the front of the arch and it keeps you in upright and locked position without getting in the way in transition. The midfoot is supported by the great shank from the Curry 2 and it runs from the heel into the forefoot, providing stability and a little spring in your step. The heel is split so at least half of it is on the ground for traction on awkward landings or movements.

The upper support comes from the lacing system and it is locked. Using the wider fingers on the medial side really give the laces something to anchor against on hard lateral movements (keeping your foot from sliding too far out). That containment translates into quickness, and we all need help there. The heel counter is external and it is large but not rock hard — just enough to help on normal landings and a little angular movements. However, it won’t feel like a brace when running around picks or curling for jumpers.

Transition was smooth and effortless, helped by fit, traction, and the low ride. One good thing about lack of cushioning is it gets you into your next move easily — it may just hurt later. 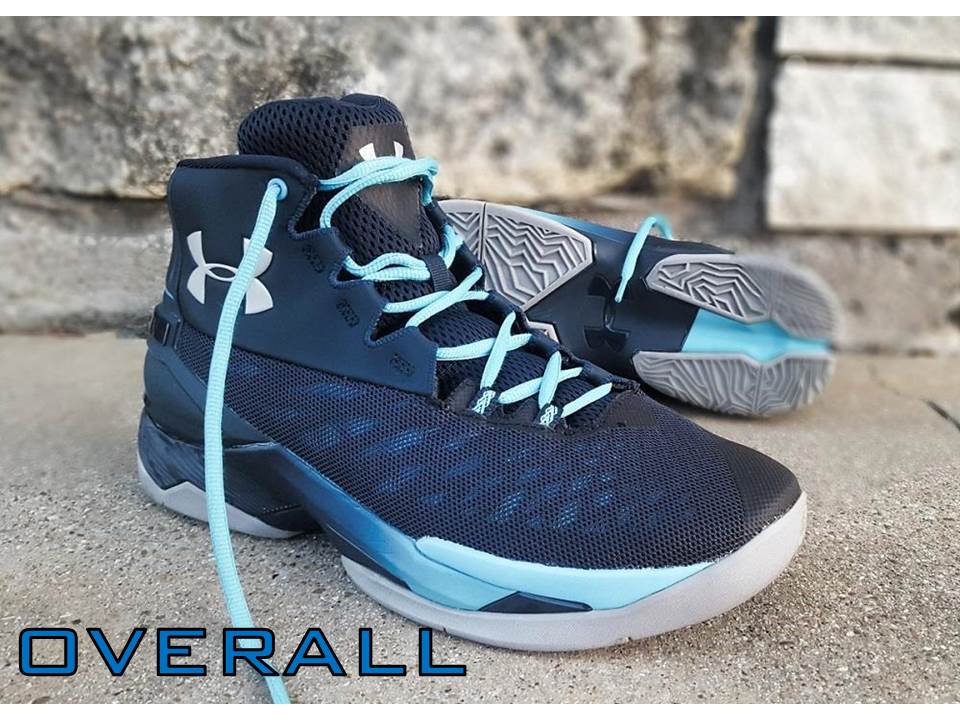 I was really, really excited about the Under Armour Longshot. Micro G, leather panels, and Curry 2 traction? That is a dream shoe for me. Dreams die hard, with a vengeance, as the Under Armour Longshot only hit one of those areas, and it was the easiest one. If the product description had been correct, maybe I would feel differently about the Longshot, but as is, I can’t get past the disappointing materials and cushioning. That isn’t to say that the Longshot is a bad performer because actually, if you ignore what was missing, it performs very well (like a clone of the Curry 2).

Overall, the traction is Hall of Fame material, and if you need a low riding, supportive shoe, the Under Armour Longshot is great. If you are looking for bouncy, responsive cushioning or premium materials that mold to your foot and break in quickly, look elsewhere. But if you need a solid, durable, no-frills shoe that fits your budget the Under Armour Longshot has you covered. We just wish it was covered in leather with Micro G. 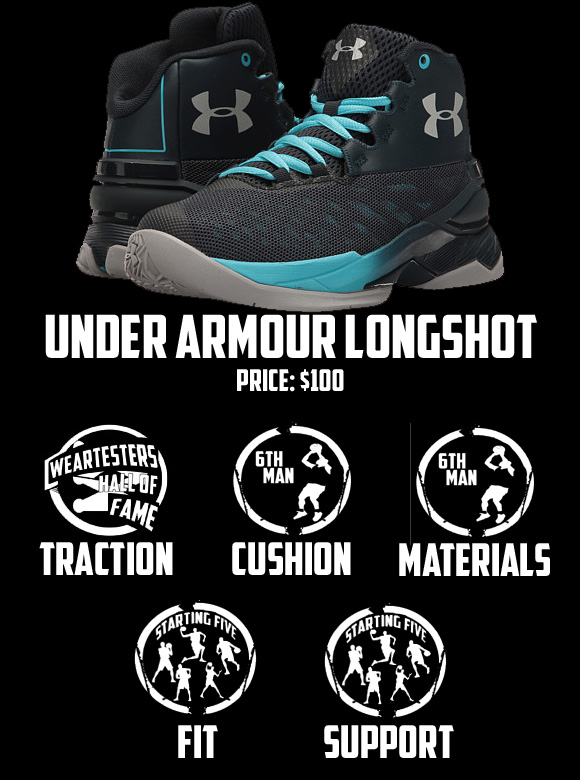