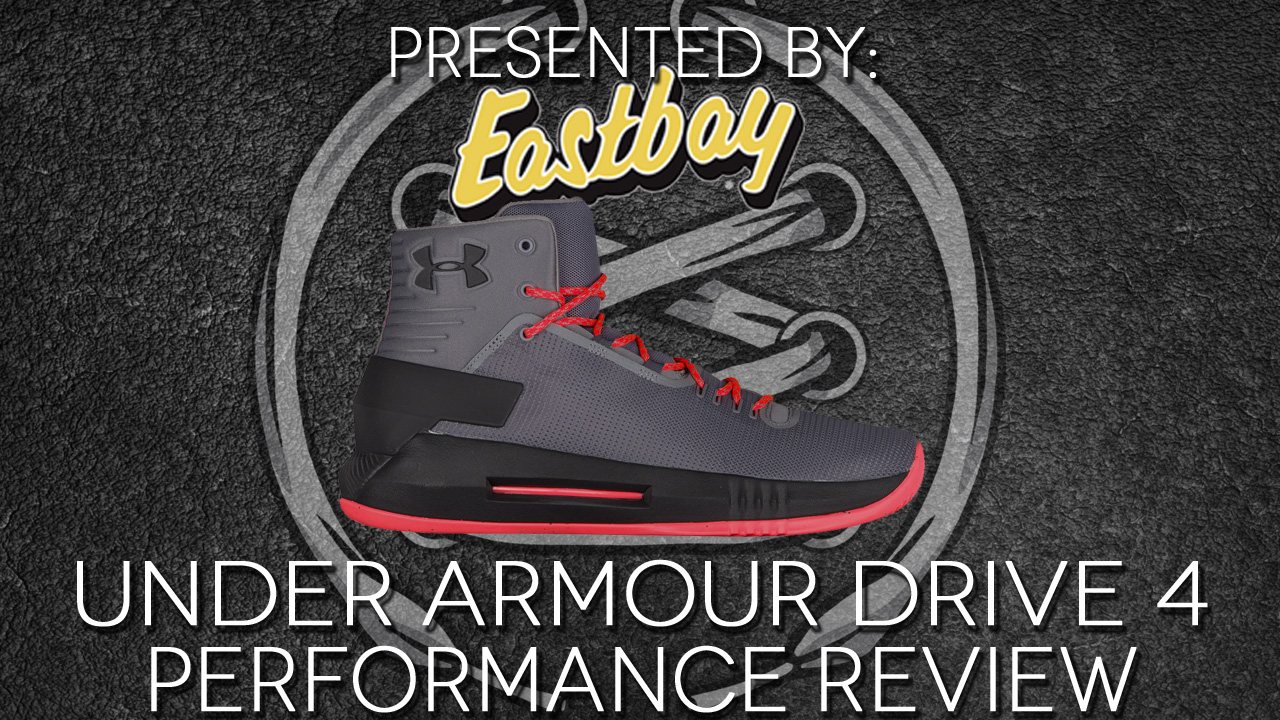 Leaving the Clutchfit out of the Under Armour Drive 4 name and off of the shoe certainly changes the line. Question is, for better or worse? Find out, true followers…

You can find the UA Drive 4 now at Eastbay.com

The Clutchfit Drive! For those of you who haven’t been around long enough to remember, the Clutchfit Drive (CFD) was the shoe that started it all. Oh, sure, Under Armour made basketball shoes before the CFD — the Black Ice, Bloodline, the Spine series, and the Anatomix Spawn — but the CFD was the shoe Curry took over in.

Released in the fall of 2014, the high cut, bright colors, and Micro G cushioning made the Clutchfit Drive a top 3 shoe on every list that mattered. Over the last three years, we have seen some changes — some bad, then back to good. Now, the most major change to the CFD: UA took away the CF. What the F? Let’s get to it… 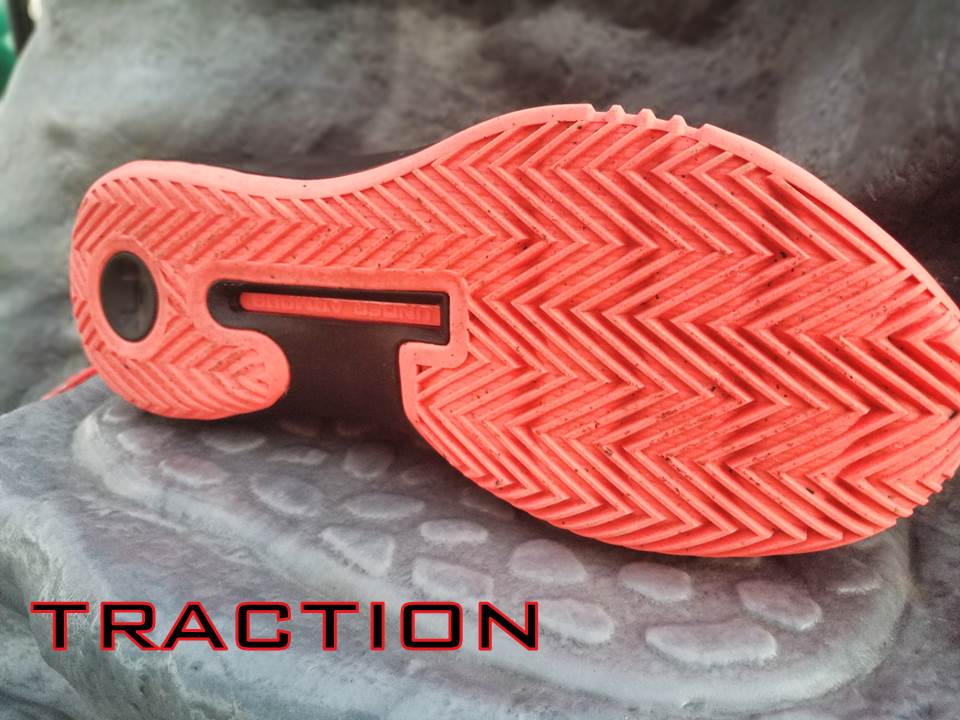 One thing that has been consistent over the life of the Drive line is the traction — herringbone done right (except for the CFD 3). Under Armour went back to what worked, and boy, it worked.

Seriously, look at it! That is thick, deep, and looks like a pitbull on PCP — it’s going to bite and not let go. No matter what floor was played on, the Drive 4 was solid with no sliding or drifting, just solid footing on rubber, concrete, or old wood. And the bonus: it is hard enough and thick enough that it should last for more than two wears outdoors, which is all most shoes give us now.

One design element that was interesting, simply because there isn’t really an apparent reason, is the waves under the herringbone. It is cut for flex, making transition smoother, but it also could have allowed UA to add more cushion under the forefoot.

As for transition, the Drive 4 is no Sade (“Smooth Operator”), it’s more Big Daddy Kane (“Get the Job Done”). The first Under Armour basketball shoes had a “slappy” feel but that had went away around, you guessed it, the Clutchfit Drive. The Drive 4 isn’t as bad as the Anatomix or Bloodline, but it loses some of the fluid movement of the CFD3 and Curry 2. But it isn’t the midsole making the transition off, it’s the collar. So, we will save that for later. 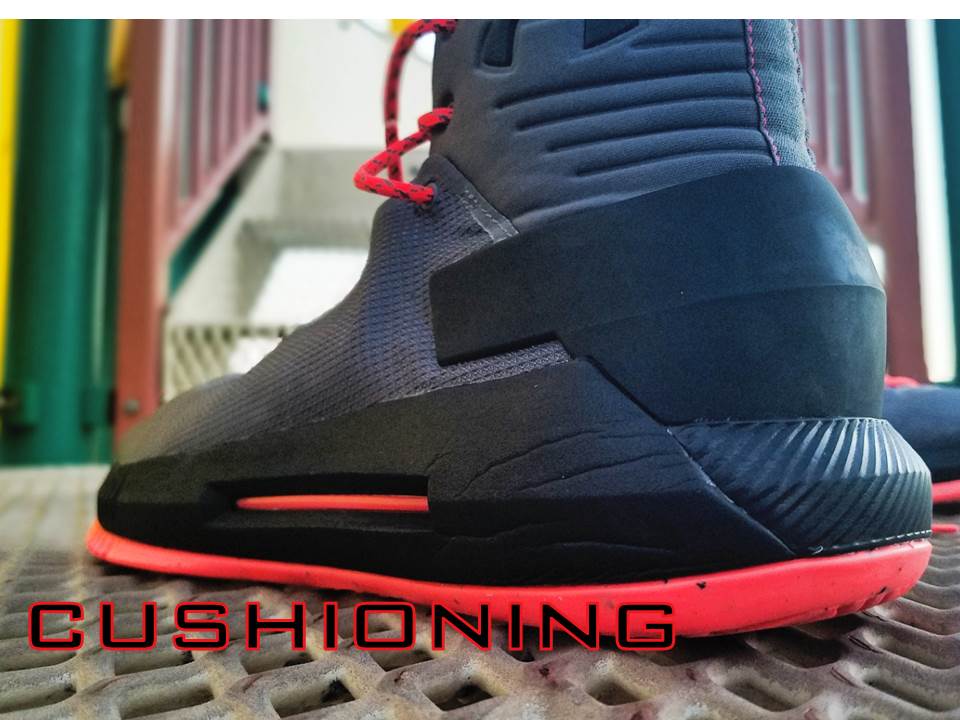 That heel puck with the lines cut into it? That’s Micro G. Three years ago, Micro G was the best foam on the market for basketball; it was dense, responsive, rode low, and lasted. What else could you ask for?

Under Armour decided we needed Charged instead. So, we rocked with Charged for two years. It isn’t bad; it’s stable, rides low, and absorbs impact extremely well. But, it isn’t Micro G.

So, Under Armour Drive 4: the Micro G is soft, absorbs impact, is inside the harder carrier foam so instability on landings is gone, and the response is crazy. No bad back or knees after playing five or six games a night in the Drive 4.

The forefoot, however, is not Micro G — at least not like older models. There has been no definite breakdown, but the forefoot feels like straight EVA. Micro G would have lived for this shoe because the Drive 4 rides fairly low in the forefoot and a layer of G would have improved response and helped with impact protection. As it is, the forefoot isn’t bad, it just feels dead. 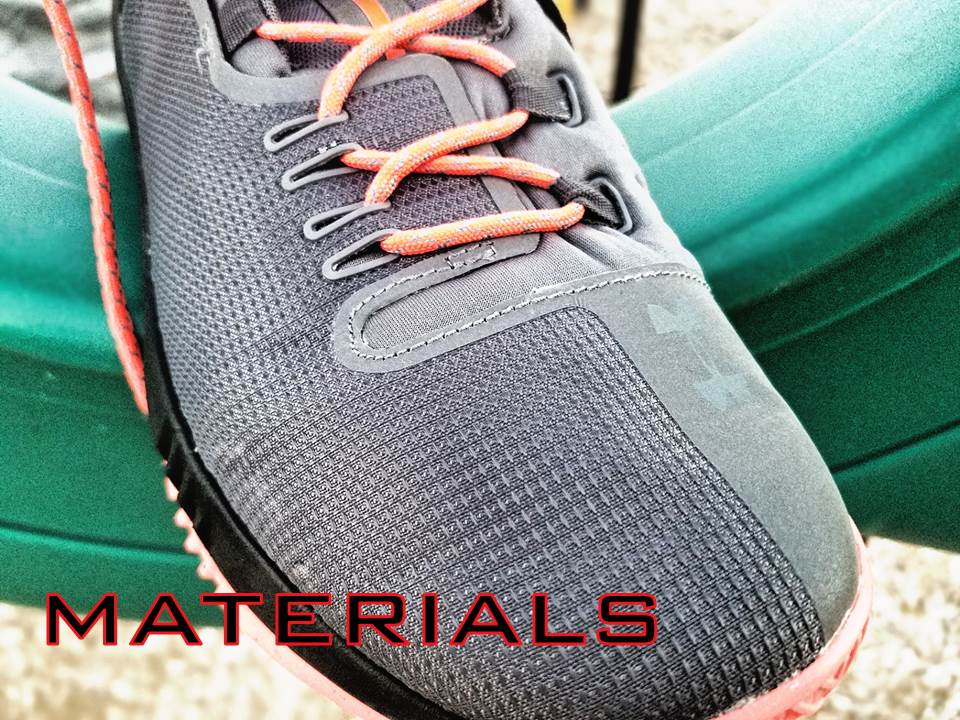 The majority of the upper is made up of a very tightly woven mesh around the lateral toe, midfoot, and the medial midfoot. This material is sort of stiff with no give or stretch at all, but the panels flex easily while playing. It is a strange material — it doesn’t exactly form to the foot, so there is dead space around the toebox and arch, but while playing there is no stiffness or popping associated with stiff materials. However, these are just outer panels.

Under the weave are padded panels covered with the same neoprene-like material as the ankle collar. These try to take up the empty space caused by the overlays but fail to do so in the forefoot. The medial side is covered in a nylon overlay on the toebox with 3M piping for detail around the laces and midfoot. The ankle collar is more of the padded neoprene and it’s soft and flexible straight out of the box. Overall, not much new for the Drive 4, but all the material blend together for an interesting shoe. 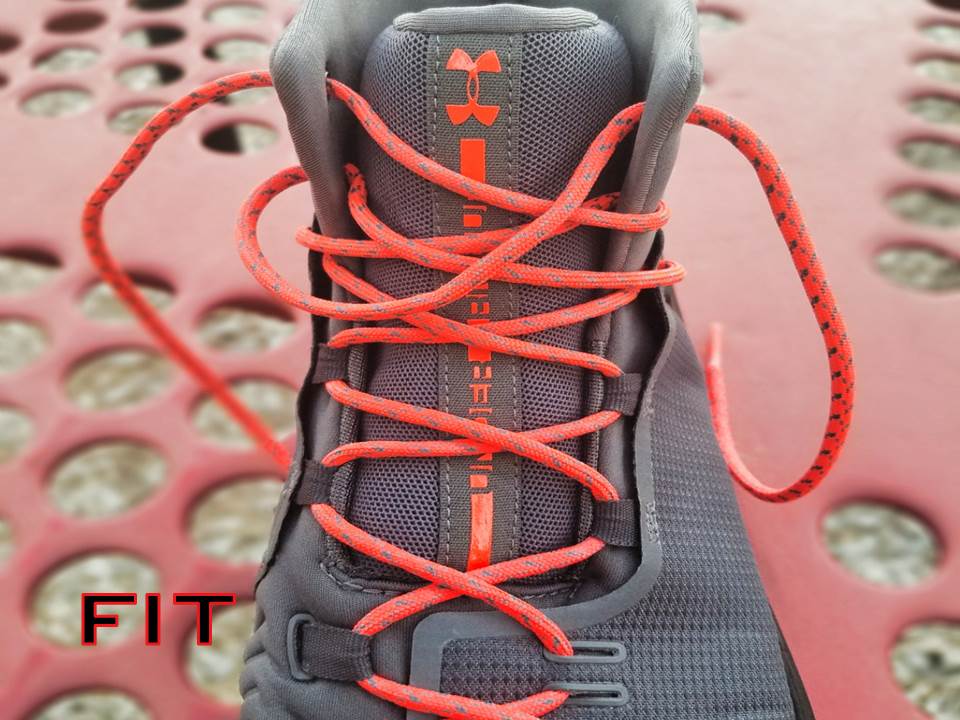 For all of the interior padding, overlays, underlays, highways, freeways, and lace holes, the Under Armour Drive 4 should be a lockdown straightjacket for the feet. In one respect, they are: you definitely feel the laces and straps when laced super-tight, which I had to do to get a confident locked in forefoot fit. If the laces weren’t cinched up, the wide forefoot had me sliding across the footbed on every cut and defensive slide.

Coupled with the killer traction sticking solid to the floor, my foot was taking trips all around the shoe. Spacing the forefoot laceholes a little farther down the side panels, tying more into the midsole, would have definitely helped in this area.

The generous fit continues into the ankle collar. To completely stop heel slip the ankle laces had to be pulled super-tight, which led to a lot of lace pressure across the front of the ankle. This is serious, because the tongue has decent padding, but those thin, hiking boot ropes cut right through. Once the laces are pulled and tightened to that point, there was actually a decent fit.

Still some empty space around the forefoot — the overlays just can’t fit and form to the foot like a regular woven or knit — but nothing that makes the shoe unplayable. There are just better options if fit is your number one priority. 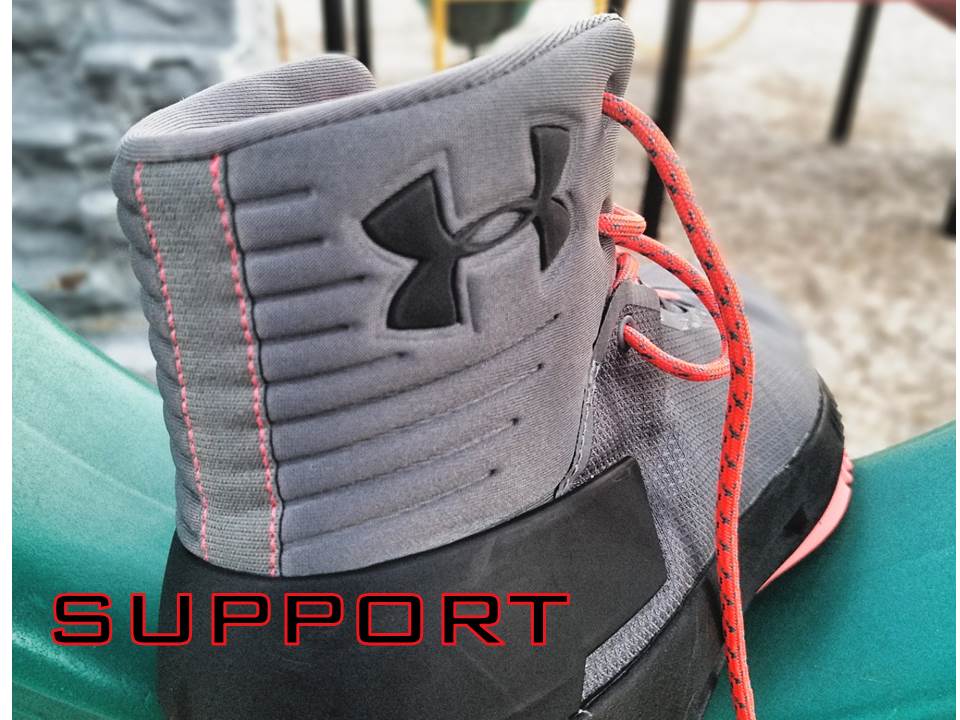 For all of the stiff materials and the loose fit, support comes in solid for those same reasons. Empty space usually leads to instability, but the overlays work hard to keep you upright. The midsole features a plate running from heel to midfoot (that’s the pink line you see in the midsole under the black foam) and it does a fantastic job of keeping the Drive 4 from bending in bad ways.

The base is wide and the cushioning is stable so no worries on heel landings. The heel cup is actually what you see: it cuts out around the bottom for a little extra flexibility but still wraps around the heel for lockdown (and can cut you like a samurai — wait on Nightwing’s review).

The real problem with the Drive 4 is the ankle collar. What looks like a soft, padded collar turns into a stiff ankle brace when laced up tight. The issue? There is no stretch or give in the materials — it wraps up high and tight and becomes way too restrictive. This leads to a drop in transition, from what should be a smooth, low riding shoe to a shoe that feels like it is fighting your natural movement.

Now, if you normally wear ankle braces or feel the need for a higher-cut, supportive shoe, this should fit you perfectly. If the fit was just a little more streamlined, and the ankle collar had at the least a little give, support would be Hall of Fame. As it is, support is still really good and makes the shoe safe for any position. 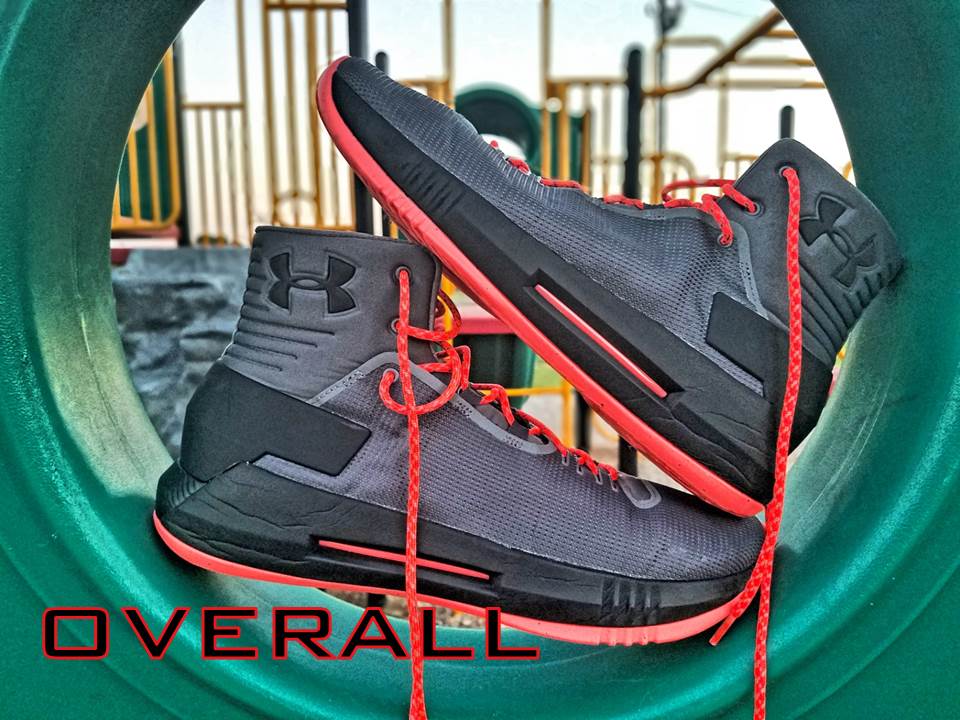 I really wanted to love this shoe — it looks freaky but cool, the design lends well to color, the appearance of Micro G made me happy, and the traction (the herringbone grips). Overall, the Drive 4 is a decent, serviceable shoe — nothing except traction really stands out, yet the shoe is good for players at all positions.

Being a team shoe, and priced at $115, you can expect to see the Drive 4 on plenty of feet this coming season, especially when the Curry 4 isn’t rumored to release until nearly the debut of the NBA season.

Here is the deal: if you are a player who plays all over, from point guard to power forward, indoors and out, the Drive 4 is definitely a shoe to look at. If you are the quickest of guards and want to cut in and out or need more forefoot cushioning, keep looking. The Drive line has been solid since day one — even Steph thought so — but some small tweaks would make the Drive 4 great. So here’s to the Drive 5!