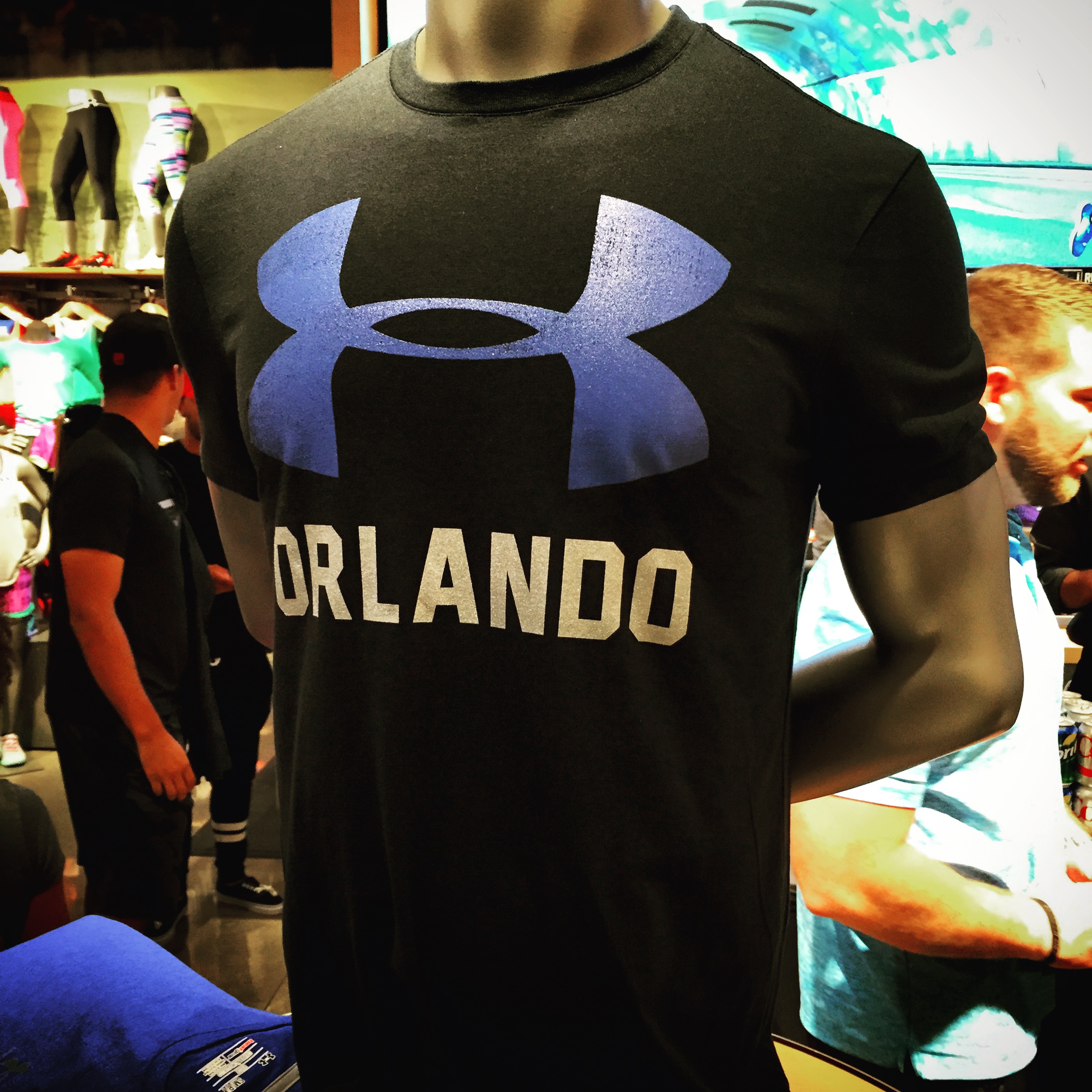 I gotta be honest, I’m a big fan of these sneaker events but not a fan of sneaker event posts. It’s pretty hard to capture what it was like being there in a blog post or video. I’m going to try something a little different with my write up, so feel free to use the comments to tell me how badly I failed.

So as I arrived at the Mall at Millenia, which coincidentally is the ritziest mall in Orlando and situated close to Universal Studios, Wet and Wild, and a bunch of other tourist attractions, I had no idea where to go. So I enjoyed the skylights and tried to avoid wide eyed tourists who are bane of every Floridian’s existence. 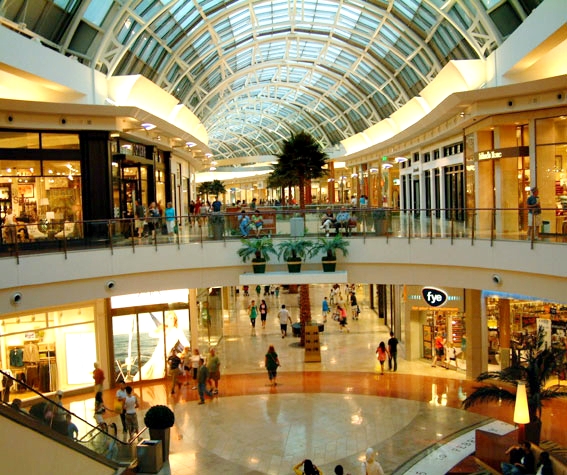 Then I saw this: 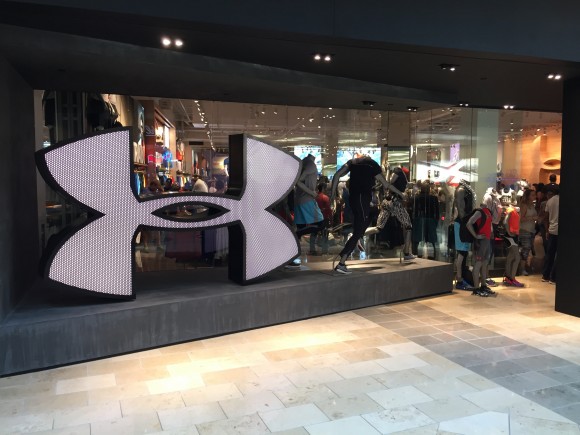 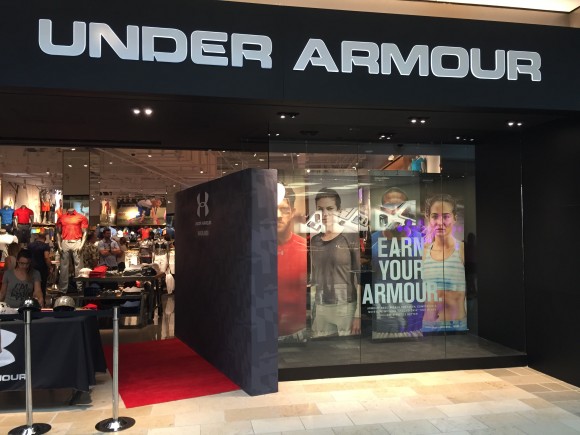 Ah, the red carpet. Under Armour, you shouldn’t have done all this just for me. 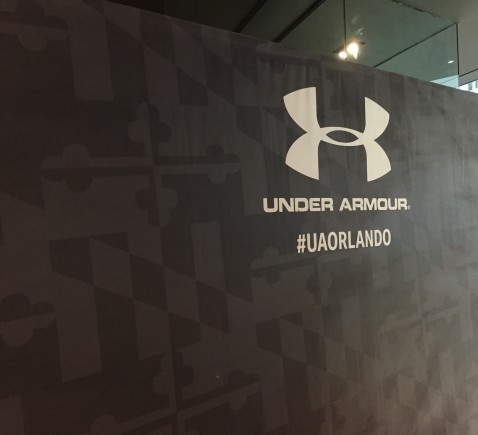 Under Armour was encouraging people to take selfies in front of this backdrop. I have a no selfies policy so I just took a picture of the backdrop. Imagine your goofy mug taking a selfie in front of it.

Music was blasting and on my right I spotted the DJ. I swear he was all party until I pulled out my camera. Then he did this: 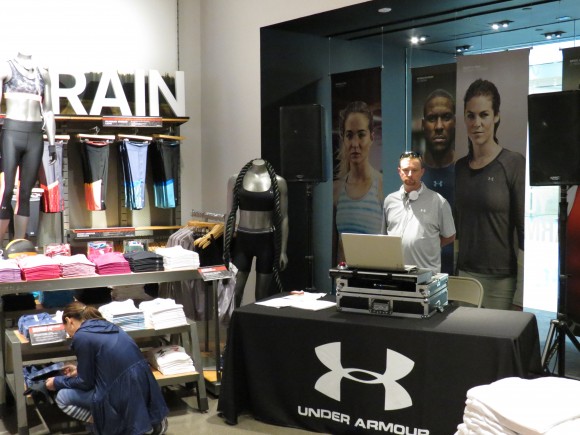 Seriously? Look alive for your moment of sneaker blog fame! Shortly after this, he asked a trivia question to all those in attendance, “In 1999, Under Armour signed a deal to appear in two Warner Brothers movies. What were they?”

Know the answer? Well, no one (except me) in the store knew until somebody looked it up on their phone. The prize? A $100 gift card. It was at that moment I wished I wasn’t there for work. Oh, you want the answer? Even though you’re reading this on a computer or mobile device that presumably has the ability to Google it? Okay, fine. I’ll save you the trouble. Answer: Any Given Sunday and The Replacements. Which gives me the chance to use my favorite The Replacements quote: “Pain heals. Chicks dig scars. Glory…lasts forever.” Gotta love Shane Falco. 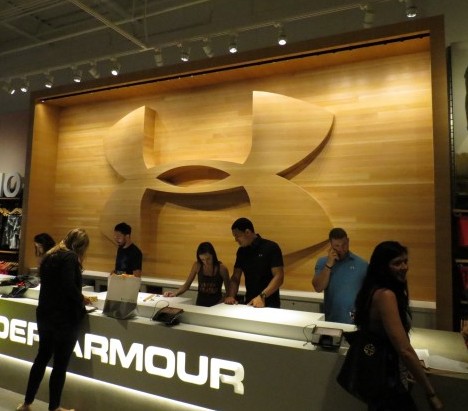 I don’t know how much they paid for that sweet wood logo but it sure looks cool. 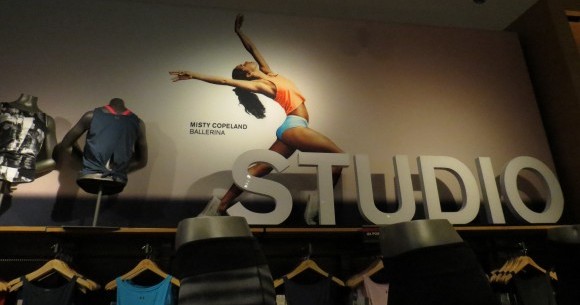 Another good design decision, ample photos of Misty Copeland for those of you that are fans of her, ahem, work. And now for the best part, the shoe wall: 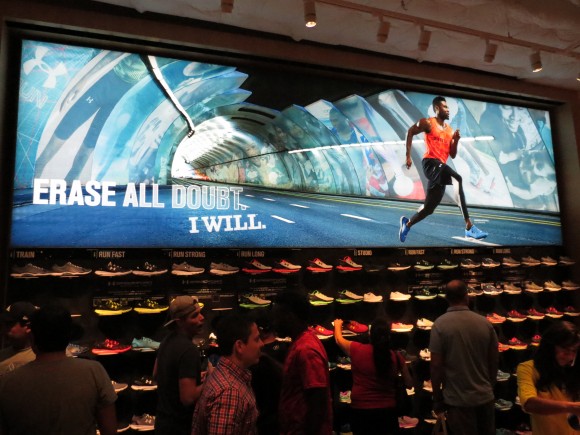 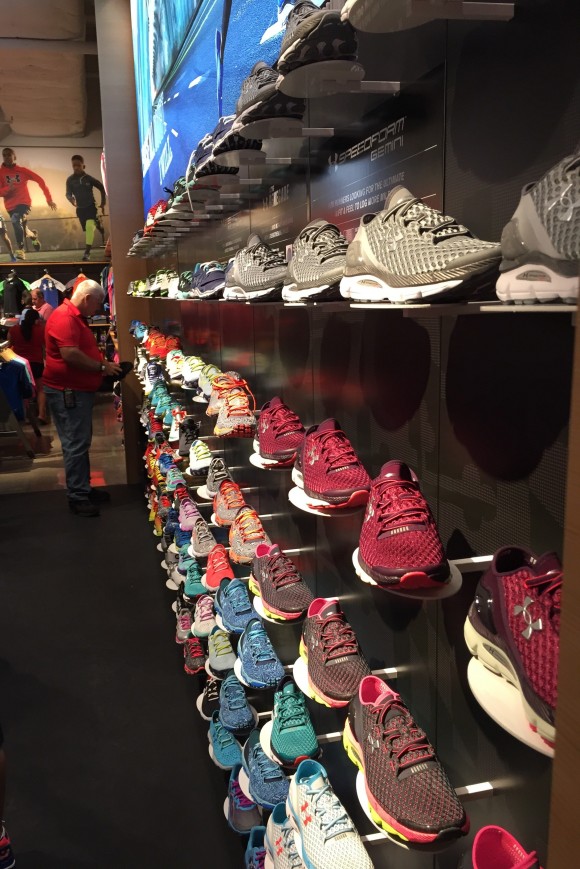 Nice sized wall–not as big as the Under Armour Brand House in New York, but pretty much every apparel company has their biggest store in New York so that’s not a big surprise. Cam Newton was well represented: 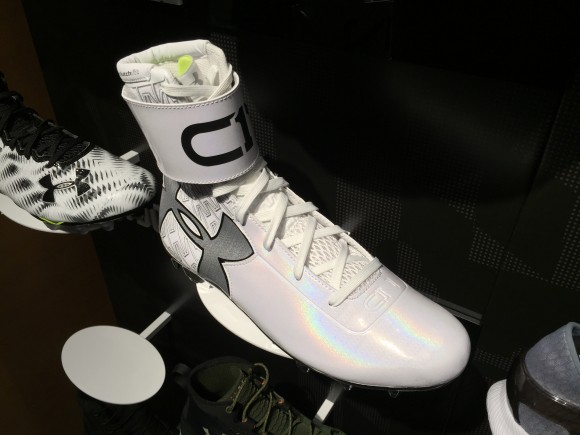 As were Under Armour’s new SpeedFit hiking boots: 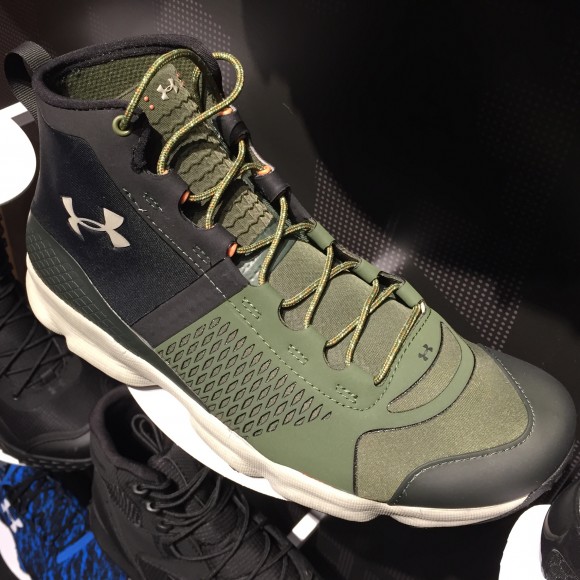 These appear to be a nice hiking option. The traction is fantastic and they’re more like the Under Armour ClutchFit Drive than they are other hiking boots. What drives me crazy about hiking boots is their bulk. The SpeedFit Hike is significantly less bulky than the majority of other hiking boots. If I get a chance, I’ll buy these and test them. I also found another Speedform shoe for Jarron to test: 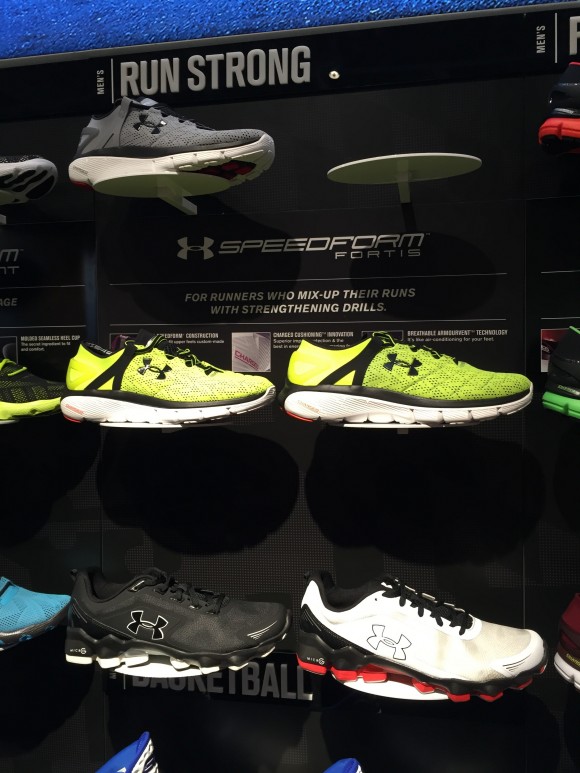 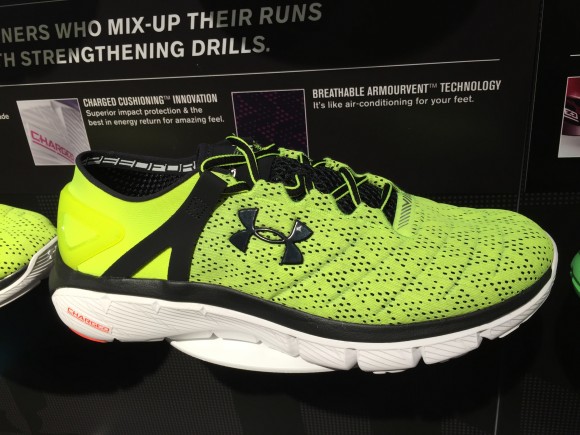 I hadn’t even heard of the Under Armour Speedform Fortis until this event. It’s similar to the Speedform Gemini but has an ArmourVent mesh through the midfoot and toe, a thicker Charged midsole, and a new traction pattern. I was this close to buying a pair to test but figured that since Jarron has done all the Speedform reviews to this point, why mess with a good thing? 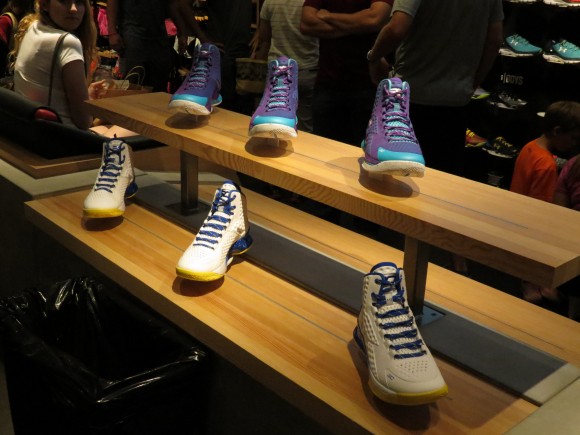 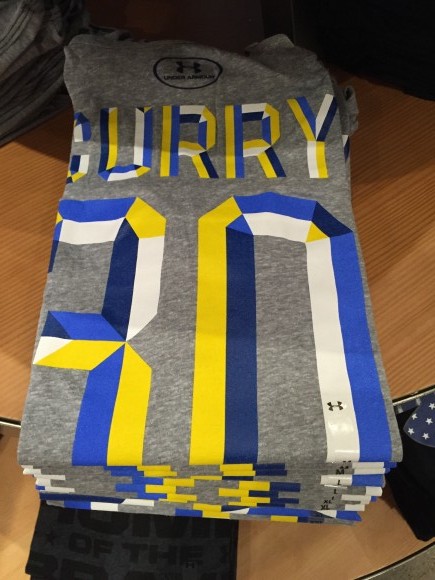 Those kicks were the most popular at the Brand House. It took me a while to get a picture with all six of them actually on the display. And look at these chairs they have for trying on shoes: 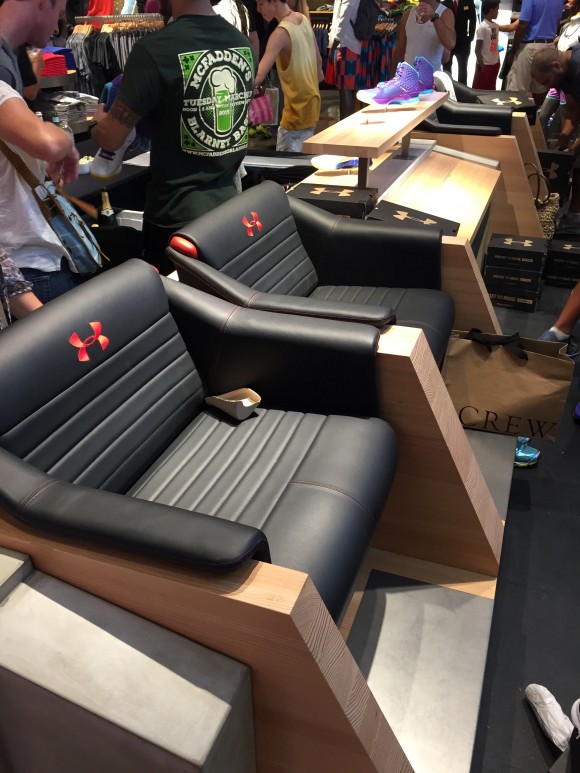 Much better than the normal wooden benches. Under Armour needs to be worried about tired shoppers stopping in to take a nap on those chairs.

As you would expect, their was ample training gear: 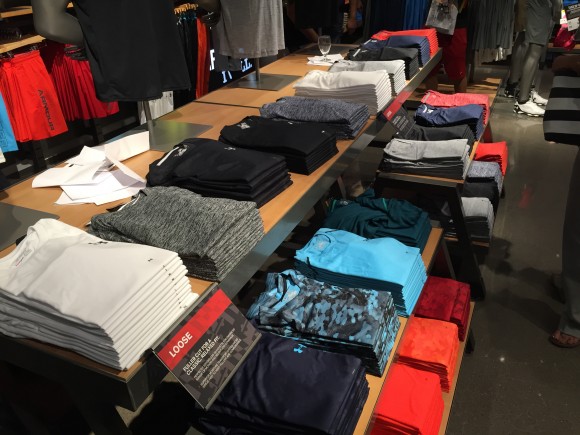 And it being Orlando, you gotta have a ton of golf stuff: 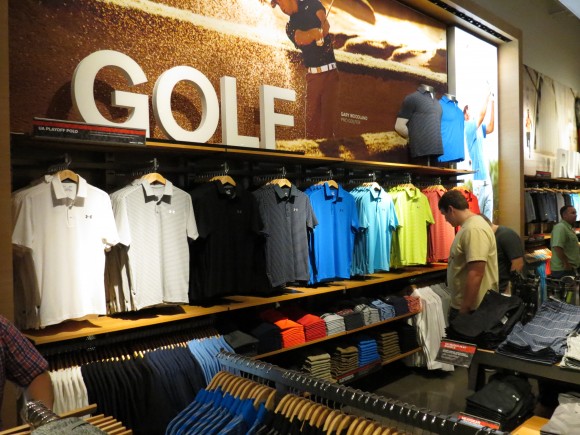 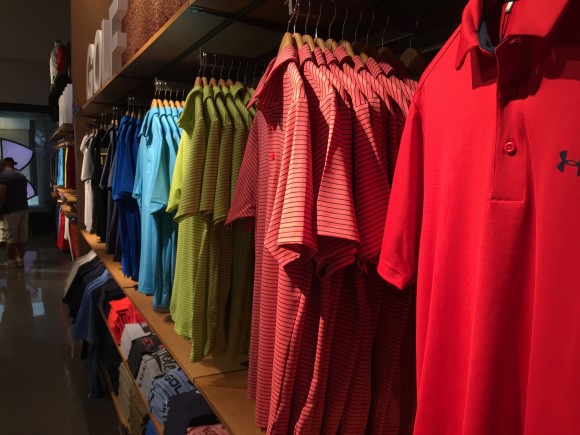 And 2nd to last (you’re almost done), this guy rocking camo and a sledgehammer. In case you were wondering, the sledgehammer is attached to the floor so someone can’t, say, use it to bust a couple of mannequins just to see them explode all over the place. 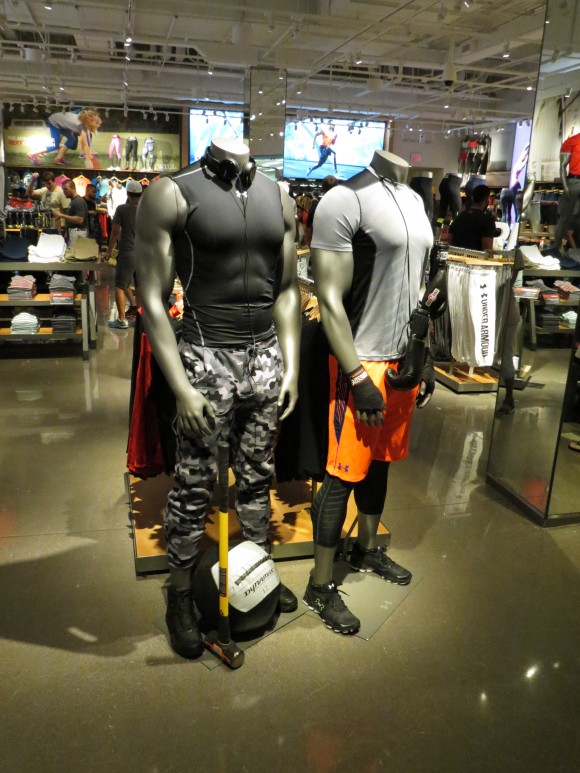 Finally, my favorite find of the day. Crab shorts! Now that’s how you golf in style. 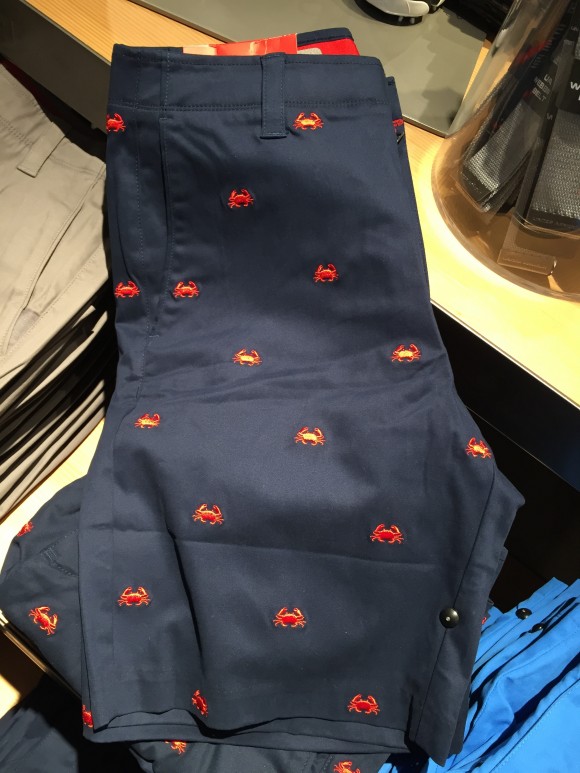 If you want to visit the Under Armour Brand House Orlando edition, you can find the address and hours here. It, along with the whole Mall of Millenia, is a nice change of pace from your Harry Pottering at Universal and your Mickey Mousing at Disney while on vacation.