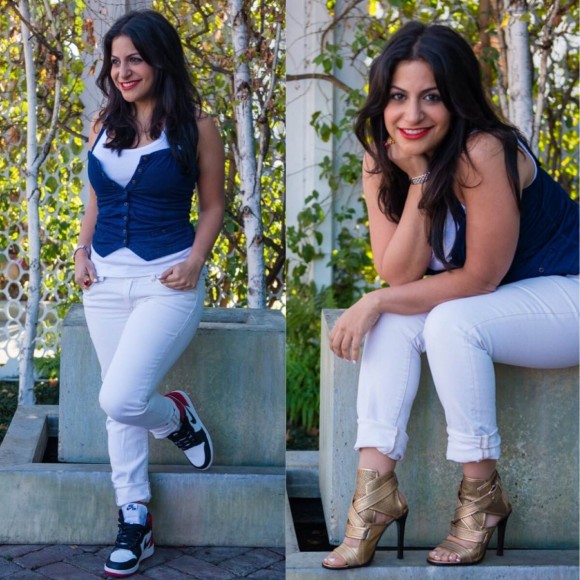 The article Why Don’t More Women Wear Sneakers? by Tina Nabati is a great look at sneakers and how women can still dress femininely with them. Nabati, the founder of ShoeQueendom.com, emphasizes in her editorial that women don’t need heels to show off their class, character, and charm. While I agree with her, I know from personal experience that many women are afraid to hop right into some Jordan Is or LeBron IXs (great female sneaker in my opinion) because they simply look, “weird.” I’ve heard that from more than one woman contemplating rocking a fresh pair of kicks. It may be the fact that midtops and hightops really hurt the female leg line, the natural form a woman’s legs may have. Vans and Bo Jackson trainers have become some of the most popular and well-received sneakers by women because they are lowtops that allow the ankle to be seen. By rising above and covering the ankle, a sneaker certainly harms how long a woman’s leg will look in terms of length and form. Ankle straps on heels have become a popular way for women to show off their legs, and make them look longer, by accenting the ankle instead of covering it.

However, all the above is a man’s take on female fashion and we all know the fashion industry has been run by men for far too long. I urge all readers, male and female, to go read Tina Nabati’s editorial and come back here and share your thoughts. The sneaker world, ruled by men, should strive to include the ever-growing number of female members (and don’t get me started on female “sneakerheads” that pose naked in sneakers, giving true female sneakerheads a grotesque image).

Tina has also compiled the 12 best Air Jordan Vines, including two videos from a guy called Jason Nash, who pokes fun at campers waiting in front of Supreme Fairfax. He is met with aggressive retaliation.