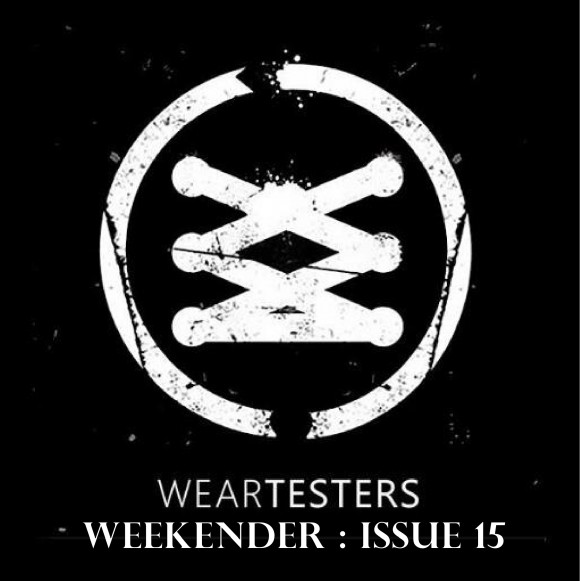 We’re back with Issue 15 of the WearTesters Weekender. If this is the first time you’ve checked out the segment, we encourage you to read through previous week’s articles as well. If you’re returning this week looking for more, thank you for your continued support! As always, be sure to leave your thoughts and comments below!

Alright, so you’ve been challenged to a game of 1 on 1 by a co-worker, a friend, relative, teammate, anyone you can’t bare to lose to. This is a high stakes grudge match, indoors, with an interesting twist: you get to choose what sneakers you play in, AND what shoes your opponent plays in. What are you picking and why? Also, do you have a go to move for the 1 on 1 situation? Let’s hear it from the WearTesters team.

I have a friend that mechanically has one of the worst shots I’ve seen and yet the ball constantly goes in. Dude is always wearing the same Nike Flex Run shoes too, which I’m sure has some magical Like Mike powers inside them.

While I like winning without giving a disadvantage, I’d give my friend the Nike Air Carnivore if the stakes were really high. The shoes are clunky (that’s the 90s for you) so it definitely would slow down his quick first step.

I’m sticking to the Jordan XX8 that I’ve been wearing for a while now. The traction is fantastic and I just get a confidence boost knowing my shoes won’t negatively affect my game. Because of that confidence, I actually started developing a little Dream Shake and a decent post game, even though I’m (barely) 5’9″. 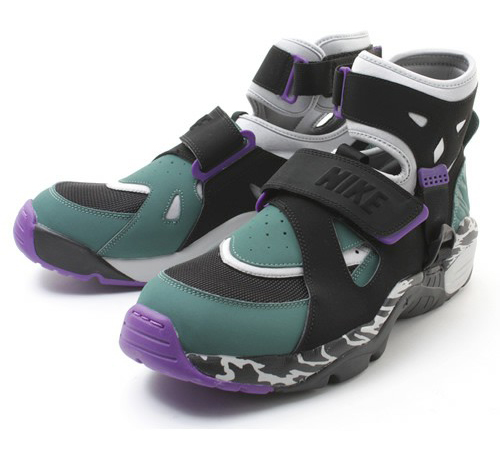 The opposite of the aforementioned Nike Flex Run…

Man… if I was challenged 1 on 1, and I could choose who wears what…I’d have my opponent rock the Reebok Wall 2 while I would rock the Air Jordan XX8 or the J Crossover II by BrandBlack. Why would I choose those pieces? Well, I’d be hoping that we’d end up on one of those typical indoor courts that are decently maintained, but not enough to make the crappy Wall 2 traction stick. Meanwhile, I’d be covered in the XX8 or JC2…I’d just hope that my shot is falling that day because I don’t really have any signature moves… I just go with the flow. Which is why I prefer 5 on 5. You’re so limited with 1 on 1. Nothing to really adapt to, no people to use to your advantage, no screens, no weak side help on D… playing 1 on 1 sucks lol. 5 on 5 is much more fun, and way more strategic. 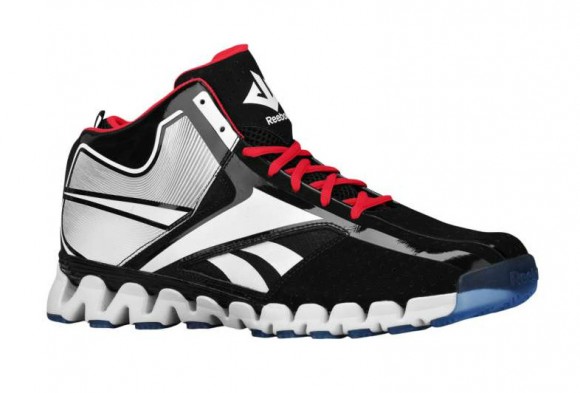 Nightwing wouldn’t be caught dead playing in these things
(image via CounterKicks)
Noah (TheShoeRestorer):
I agree with Chris, 1 v 1 is so limiting because it’s just you out there alone. You don’t have teammates for support, both moral and physical support. Sometimes you’re just not moving the ball the way you should and you know a teammate can do what needs to be done if you can’t.I’d have my opponent wear the Reebok Zig Tech or the adidas Springblade; their ankles would not survive more than 10 minutes!! I don’t have a go to move because I don’t play as much basketball as all my colleagues at WearTesters do and because of that, I’m not that good. But I’ve been playing a ton lately, trying to get my game up in case there is ever a WearTesters staff game… 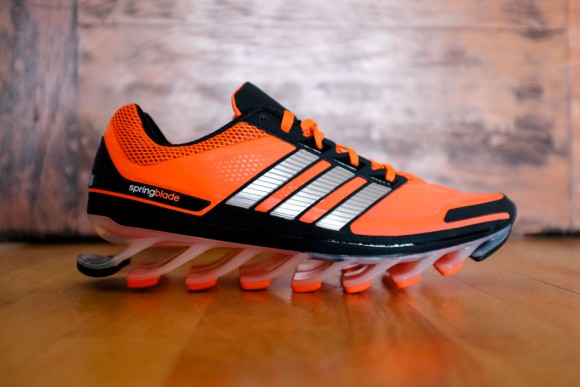 I think Noah has the cruelest choice, defense slides in these?!
(image via RunnersWorld)
Bryan (brhinkle1):
There is a guy at my gym – young guy, 19, supposedly, according to him, going to play junior college ball next fall. Dribbles like an And1 mixtape, never passes, can get to the hole at will, but his shot is broke as Radio Shack. Never stops him from shooting it though, especially step-back threes. He always wants to cover me, and I love it because after one pass he is leaking out for a fast break that never comes because I am left open drilling threes. He knows I work for Weartesters and I have dropped some boxes off for him before – kind of look out for him; he needs it.So I pick Pablo to play against. Pablo would have to wear Jordan XI Concords, because it wouldn’t matter for court conditions, he would NOT play hard and risk messing those crisp XI’s up. He almost cried when I wouldn’t give him my 3M XIII’s so I can’t imagine the fear of a new pair of Concords.My shoe? Current – Hyperrev 2015, Curry 1, or Rose 5. I will say… Rose 5, because the traction seems more consistent on every floor. If I could take all time? Nike Jet Flight or adidas Supernatural Creator.
My go to move? He falls for it every time, and it is so simple – right hand dribble, low in-n-out fake crossover, stepback, fake the three, and drive. EVERY. TIME. Remember, he is only 19. Thinks his athleticism will make up for game smarts. He will learn. 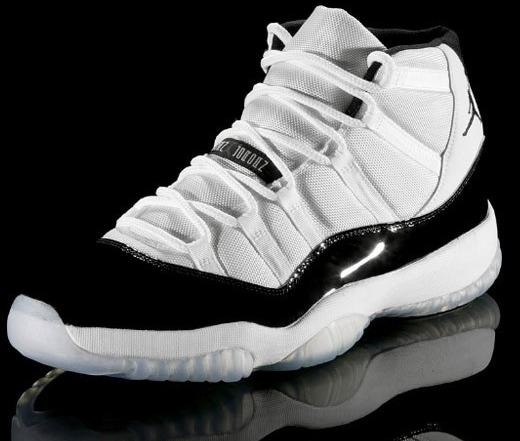 How many of you would go easy on your Concords vs. Bryan?
(image via Nikeblog)
John (SoleEngineer):
I agree with those above that 5 v 5 is far superior to meddling in the half court against one opponent. Passing is probably my favorite part of the game of basketball so though I prefer running with 5 for screen and rolls, fast breaks, and the beauty and commitment of team defense, 1 v 1 is only right for this situation. I have a friend in mind that always makes a game of 1 on 1 high stakes.Though I agree that choosing their shoes is a competitive advantage that simply isn’t right, its comical to imagine.I’d throw him in a pair of Chuck Taylors Lows. I can’t imagine his feet or his confidence would feel too great in those. I can imagine myself being tender and limited in my movements wearing a thin piece of fabric on top of a sole with a little too much court feel. Meanwhile, I’d run in my Kobe IX Lows with my ankle braces in terms of current shoes – traction, lightweight, and comfortable. If I’m picking a bit of a throwback then I’d play in the TS Supernal Creators because I love PureMotion.
In terms of a go-to move, I am more likely to perform defensively than with the ball in my hands so I would definitely fully commit to locking him up to afford myself more possessions and scoring chances (because I’ll probably need a lot more than I should). Offensively, in this 1 on 1 setting, I definitely would fall back on my strategy to dribble back towards half court and then barrell in with a full head of steam. Doing this puts a singular defender in a position of peril, like being the lone defender on a fast break. I then have the space to go right or left, spin, hit him with the revered yo-yo dribble or pull up for my favorite midrange jumper while my opponent has his momentum going the wrong way to prevent the drive….because he knows as well as I do that I’m never going to shoot a three. 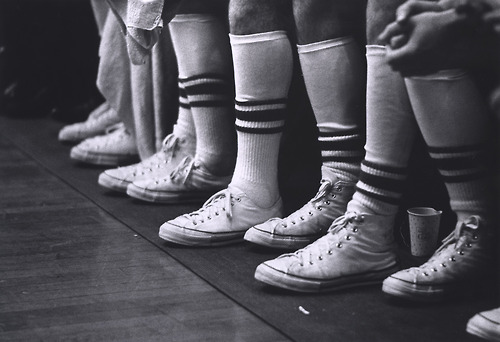 Do you think you could play in the lows?
(image via PixSchack)
Jarron (JAHRONMON):
So if I had to play against anyone and pick what shoe they would wear, I would play against my best friend James Horton, he plays like Dirk Nowitzki, funky jumper, weird dada ways, looks like a mess when driving the lane but some how makes lay ups, even runs like him too.What shoe would I make him wear? Easy, Chucks. I want him to feel the pain, he is like a brother to me, it’s my job to torture him. To make things even worse, I would make him wear he low top Chuck Taylor’s, no support what so ever. Wouldn’t it be funny to see someone hooping in Chucks?For me, I’m just rocking my trusty Air Jordan XX9, it’s my go to she for any situation. As far as my go to move that James knows all to well, between the legs step back jumper Allen Iverson style, Tyrone Lue knows this move as well. You would have to imagine he couldn’t keep up with that move in his low top Chucks.
Well that’s my pick, I decided to have fun with this one. James Is currently rocking the Air Jordan SuperFly 2 PO, so the transition into wearing the old school Chuck Taylor’s would be quite entertaining, but I’ll give him a break and let him wear Nike Elite socks if he wants. 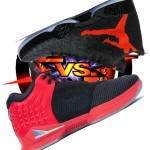 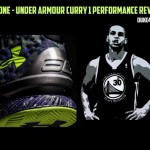 Yeah, that’s right – ANOTHER Curry 1 review. Why should you read it, when everyone else has already done one? Well, you probably shouldn’t, but I am doing it anyway, so click here… 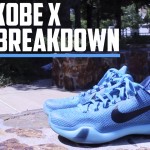 Full length Lunarlon, Zoom, textile mesh upper, and a plethora of stability features; these are just some of the things the Nike Kobe X has to offer performance wise. WearTesters details it all for you in this latest Tech Breakdown. 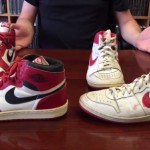 Jordan Geller, creator of the ShoeZeum, drops a history lesson as he gives us a detailed look and comparison of the Nike Air Ship – the shoe that was actually banned by the NBA – and the Air Jordan 1.

The youth, the living resurrection
Reflections of the sun glaring through the window
Now the audience staring at my mental
Feeling like the world, the world is at my fingers
‘Bout to speak to an auditorium full of dreamers
Kinda took me back to when I first had a dream
To be like the king that sang Billie Jean
Now it’s gold records, and I’m on silver screens
At the mountaintop, you still gotta dream
To the dreamers

– Common, The Dreamer, The Believer

Common has gotten attention lately for his acting in a number of recent roles, but the man can spit. He has quite a few solid albums but I chose to highlight The Dreamer, The Believer this week. It is a well put together, intelligent, and downright enjoyable (listen to Celebrate) to listen through. The album features three powerful guests in Maya Angelou, Nas, and John Legend. He also teamed up with Chicago producer No I.D. to hammer home the passionate, consistent Chicago sound and message. Common can get preachy, but he is charismatic and there is something to appreciate in his positivity and good intent. Listen, enjoy, dream, let us know! Listen to it all here: https://www.youtube.com/watch?v=b5RvrQNE_1E

As always, we hope you enjoyed this week’s edition. Thank you for reading and be sure to leave your thoughts in the comments! Who will you play in 1 on 1 and what shoes are your throwing on their feet?