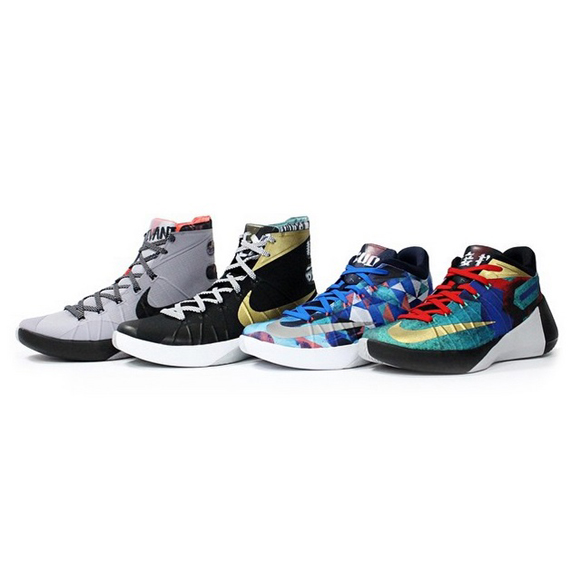 If you’re from Paris, LA, Rio,Beijing or just like crazy patterns on your hoop shoes, check out the The Nike Hyperdunk 2015 ‘City Pack’ as seen below.

Much like last year’s Hyperdunk ‘City Pack‘, this one features two low-tops and two high-tops.  The lows are made specifically as homages to Rio De Janeiro and Beijing, with the latter featuring Chinese letters on the tongue. In fact, all four shoes have words in their respective international languages. The low-tops seem to have more patterns to the uppers, compared to the mostly basic color schemes on the Los Angeles and Paris high-tops.

The silhouette has the typical Hyperdunk set up with Fuse used on the upper and embedded Flywire. The midsole contains two separate Zoom Air units, a departure from the targeted Lunarlon on the 2014, as well as the 2012-13 renditions.

Click on any of the photo captions below to purchase any of the four colorways at Nike Store. The lows retail for $140, while the highs are priced at $150.